The Allied 1943 summer offensive is off to a mixed start...

AUSGAME2021
M/J 1943 – THE ALLIES TAKE THE INITIATIVE
M/A EOT rebases, production and reinforcements and then the important initiative roll. The French are building roads (in Syria) and the GERM rebase a Raider into Italian Somalia. Japanese build drops due to partisan acty and large Conv losses. The Axis were desperate to win the initiative so a Conv could be run out into the Baltic to supply the OOS and inverted GERM Army of Norway. In the Med, and probably more important winning the initiative would allow them to commence the orderly withdrawal East of the GERM North African Army along the coast road before it gets trapped by the advancing Allies.
Drum roll, both the Axis and Allies roll 6’s – Axis win ties so the Allies demand a re-roll shifting the init track to the Zero box and win with a 4 versus the Axis 3 – disappointment for the Axis but excitement for the Allies. Weather roll 7 with fine except rain in the N Monsoon – no reprieve in the Artic for the Axis. However, the bonus for the Axis next and equally important J/A turn is that they will win ties, as they can now demand a re-roll and worse for the Allies, if they roll EOT the init track will shift to the +1 Axis.
Allies first impulse, CW take a Combined, US spend 11 O-Points to take a Naval and Land, Russia and China take a Land and France, a Naval. US Naval sees the Pacific fleet sail into the China Sea under the cover of 7 Factor Ftrs to again contest this vital sea area and to challenge the Japanese imperial fleet. The Japanese respond, flying multiple acft into the 2 box – but the split goes to Japan rolling a 1 v the US 7 – the Japanese declines combat despite the shifts in their favour as their fleets prepare to sail again during their impulse. Other US shipping sail a Canadian ARM into Narvik to support a CW attack against the OOS and inverted Defenders (14 points) of Trondheim, other shipping sail escorts and search missions into the North Sea - no find. In the E Med, a US CA searches for the Italian Conv suppling N Africa. The Axis decline to respond with air and are found with a lucky 2 in two successive searches, which sees the Italian Conv sunk – Axis N Africa is now OOS. French Naval, a French Tpt heads to the US pickup Bradley for his trip over the Atlantic. The land phase and the Russian declining to spend O-Points on a land offensive GS the GERM line with Arty, 3 GS including Shturmovik’s and several Katyusha Rocket launchers, mixed results with some inversions, and a Rumanian intercepting pilot destroyed in the air on a 20! In response GERM rolls a 5 and destroys another 6 factor Yak. Russia launchers three land attacks, with an 18 against the solitary Finnish Corps which is eliminated as the Russian’s advance West another 150km towards Helsinki. The Blitz attack against Army Gp North is a poor with a 7 on a +12 Blitz with the defenders sent to the spiral – no GERM losses half invert which generates a GBA. Against the Rumanians in Army Group South another poor 7 sees a second Russian ENG eliminated and a retreat – again no GERM losses full invert – Zhukov reinverts the attackers.
China declines any attacks. The CW assaults Trondheim on a +12 and rolls a 6, another Allied disappointing roll inflicts a single Div loss on the defenders with Trondheim remaining in GERM hands. The US and CW land forces in Morocco and Tunisia exploit the opportunity winning the initiative gives them driving East and cutting the coastal road and attempt to pocket the GERM forces trapped in Tunisia (Ed: that would be Algeria). No attacks as the CW took a combined limiting land attacks and the GERM astutely declared emergency supply. A US Para drops on a Norwegian mountain hex whilst it is OOS. The Allies were very disappointed as 3 out of the 4 allied attacks were very poor (6, 7 and 7) Trondheim was retained by the GERM, the Russian has lost two Eng and most of his HQs are now inverted – all for gaining 3 hexes of E Poland and destroying a Corps(FIN) on the first impulse of potentially a long clear weather turn – not the start the Allies had hoped for! 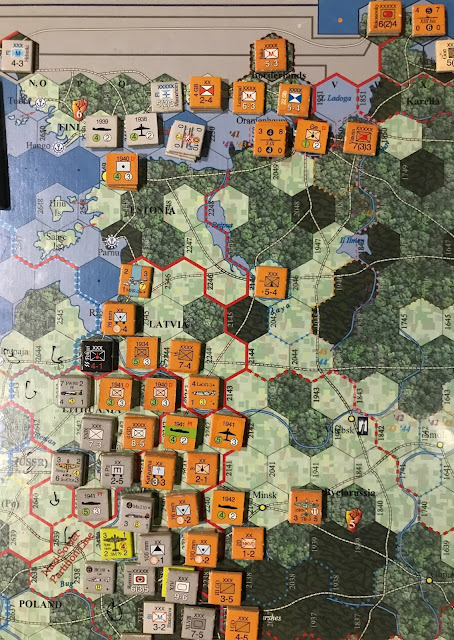 ARMY GROUP NORTH - UNDER PRESSURE - FINLAND A FIGHT FOR THE CAPITAL 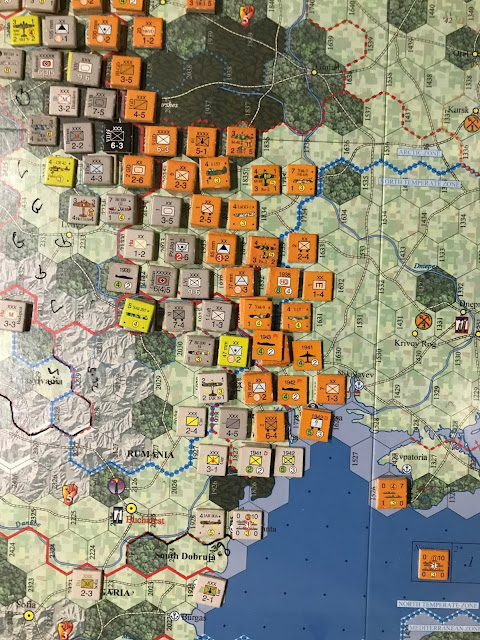 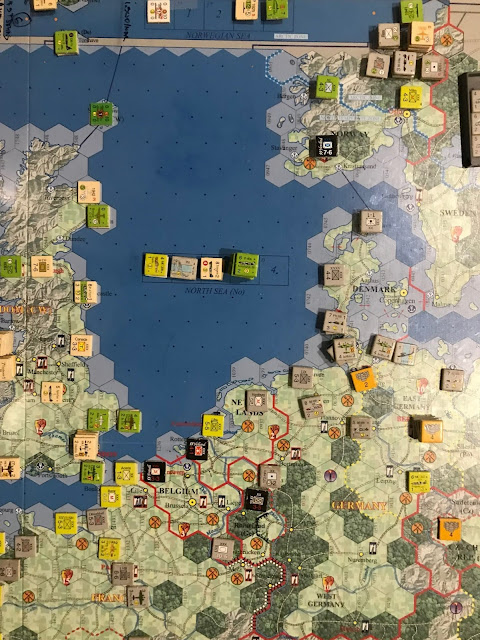 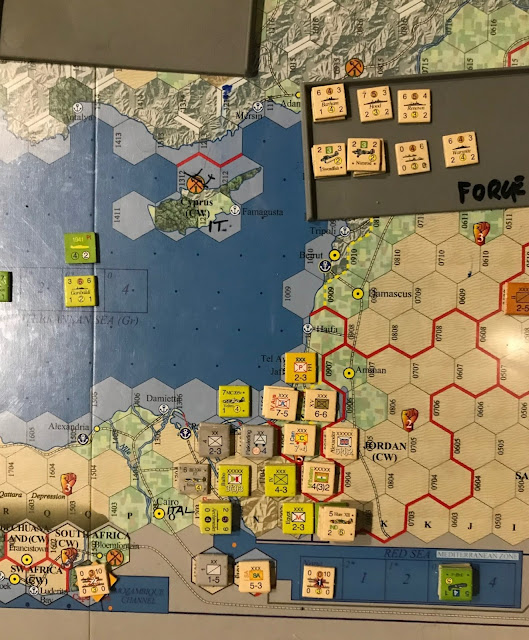 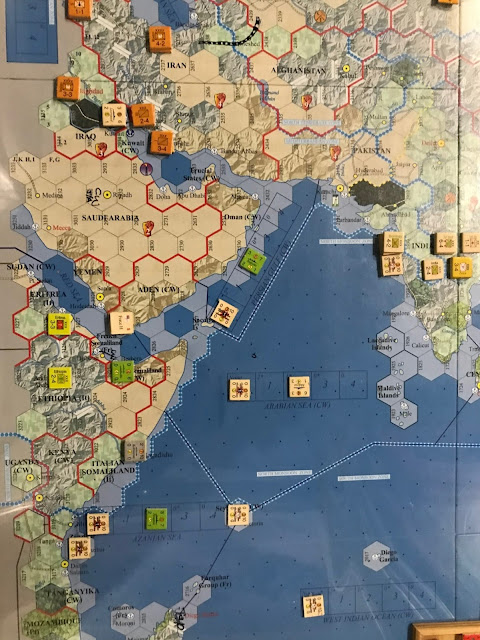 ARABIAN SEA - REPORTS OF A GERM RAIDER START TO DRIFT IN 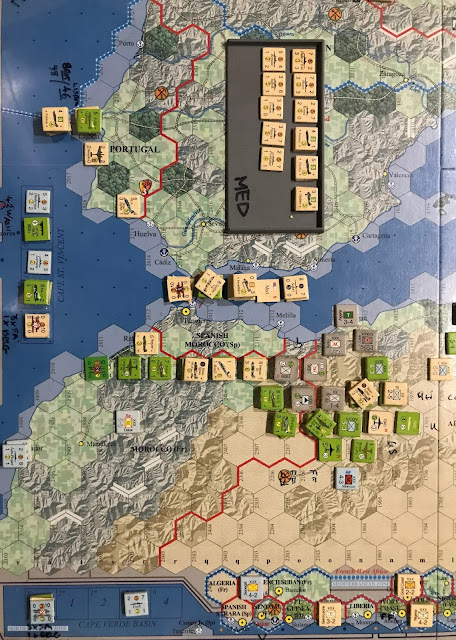 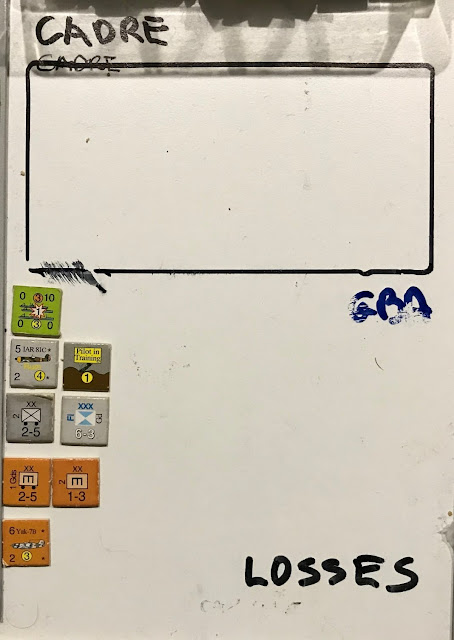 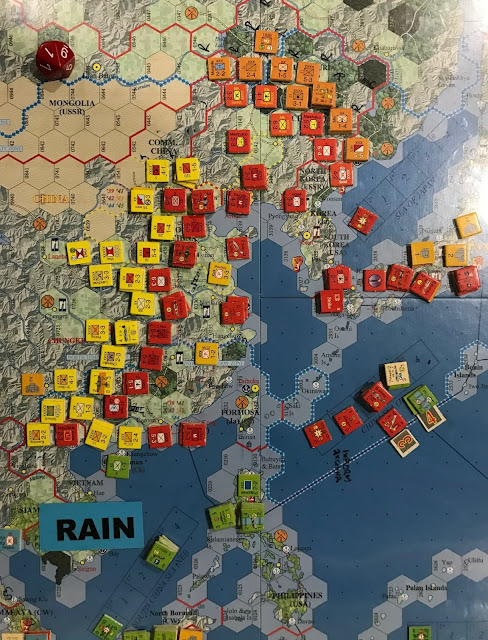 THE PACIFIC FLEET challenges THE CHINA SEA
Posted by Sun of York at 5:45 PM