Using the scenario from Hexes and Miniatures converted to hexes, Simon and I tried this out at the club's July Games Day.  The luck of the dice determined that Simon would command the Soviets forces which comprised the 57th Tank Division and the 1st and 2nd Smolensk Militia.  I commanded the German 29th Motorised Division which comprise the 15th and 71st Shutzen regiments with some recently received special support troops.

This is the revised map: 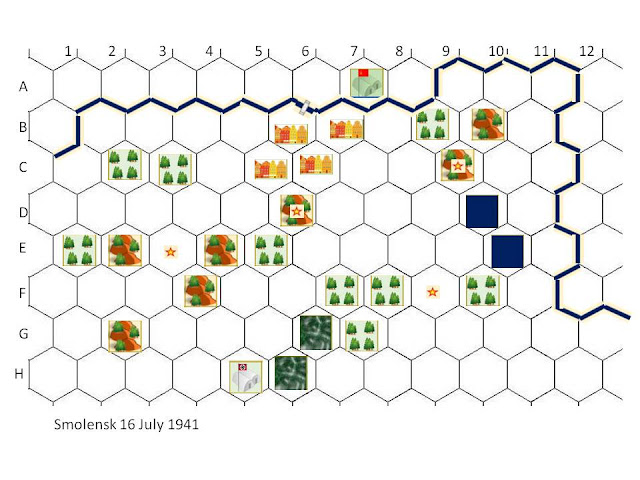 The stars of victory locations along with the urban areas of Smolensk (to a maximum of two).  The Germans need to hold five by the end of 18 turns.

This was the first time my Soviet and Axis forces would be on the table top.  How would they perform?

Grey storm clouds approaching,
as seen from the Soviet side.
Smolensk nestling on the wrong side of the Dnepr 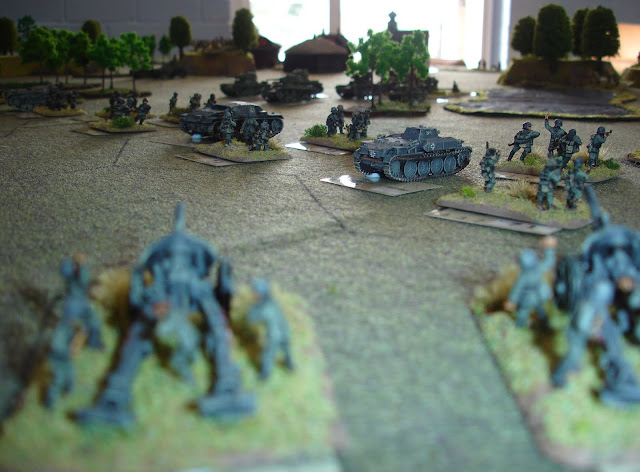 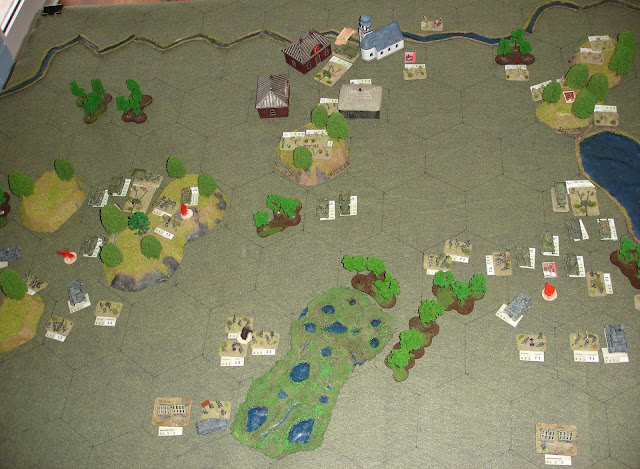 The Germans attack to clear the way through to Smolensk. 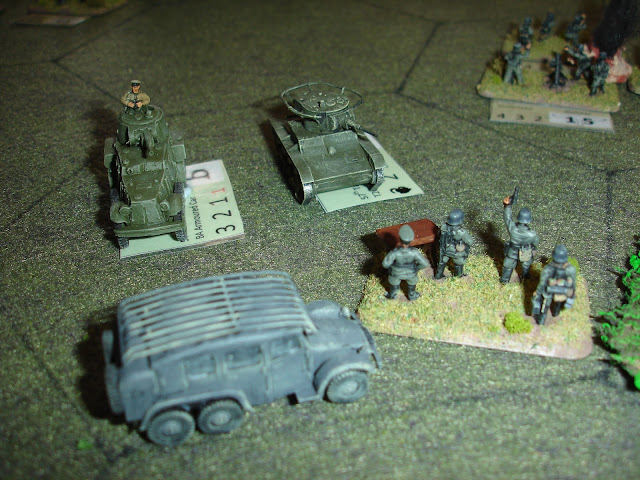 Disaster strikes the German command when it is over run by Soviet armour.
In my defence I was a bit rusty and not playing well.
That soon changed, although at the time I thought it was all over! 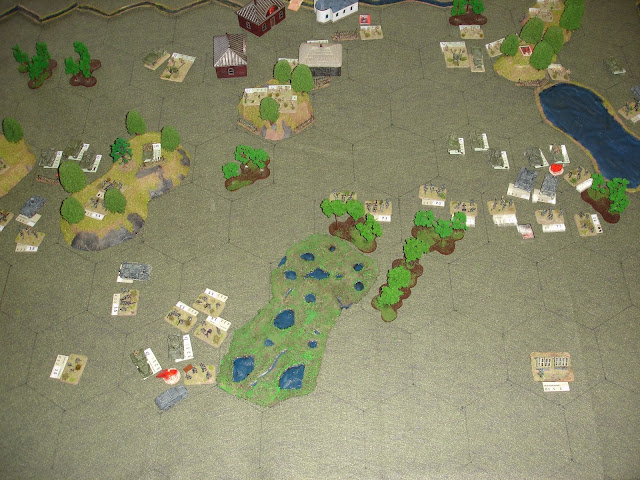 Smolensk would have to wait.
German troops hurriedly return to reestablish Lines of Communication 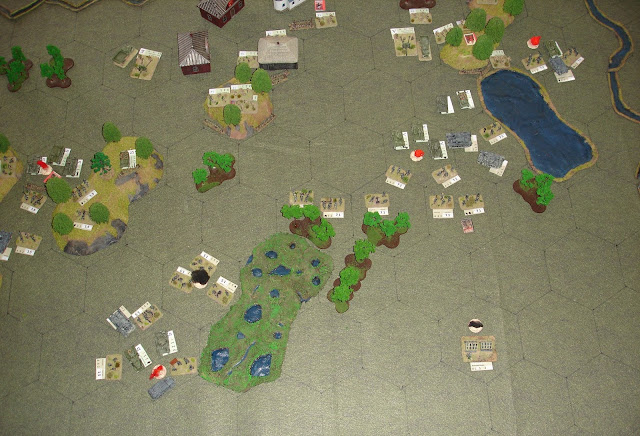 But it is never simple.
However, the Division recovers its decorum and steps up the attacks. 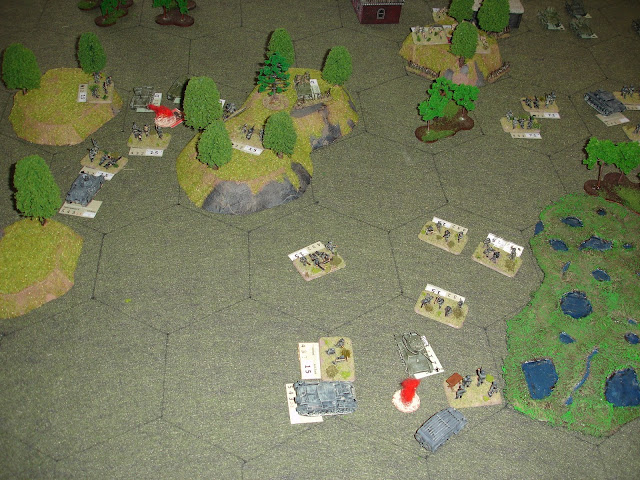 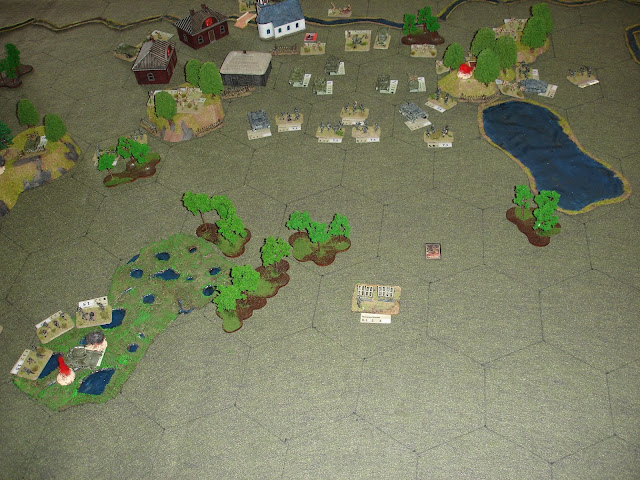 Although more time was wasted chasing the enemy into the marshes.
That Soviet force had taken out one German rocket launcher detachment
and could have gone on to attack the remaining one.
Couldn't let that happen! 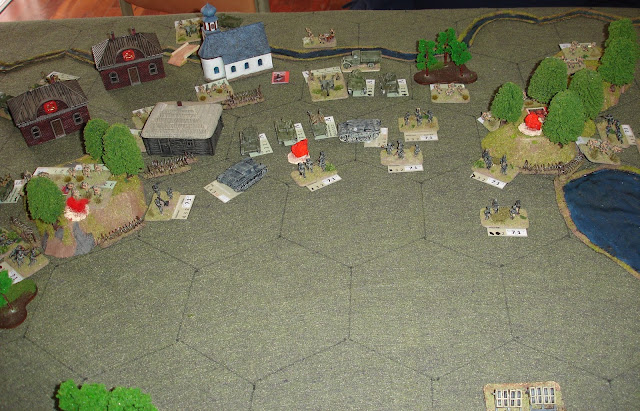 The Germans are now closing in on Smolensk.
The German attack on the hills fail.
This failure was no where more apparent than the hill on the right near the lake,
as the Germans didn't try to assault the position again. 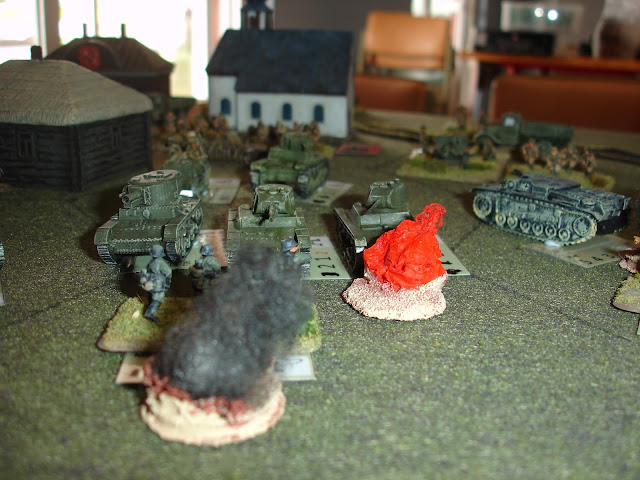 A Soviet counterattack is driven off.
At this stage the Soviets had withdrawn to defend the city,
as their previous positions had been compromised. 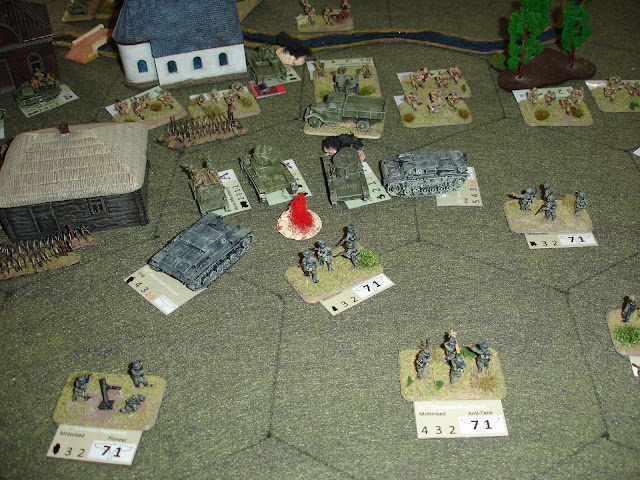 The Germans are fighting to get into a good position to start attacking the urban areas. 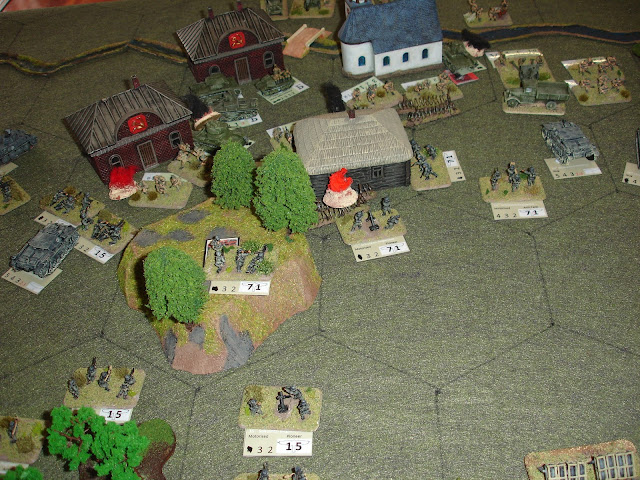 Smolensk is now under attack. 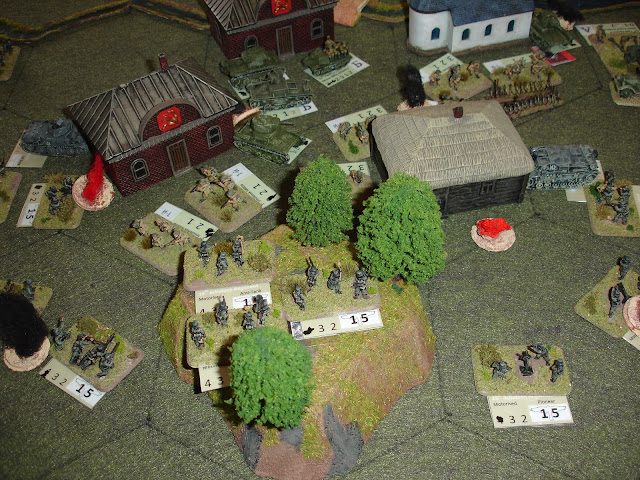 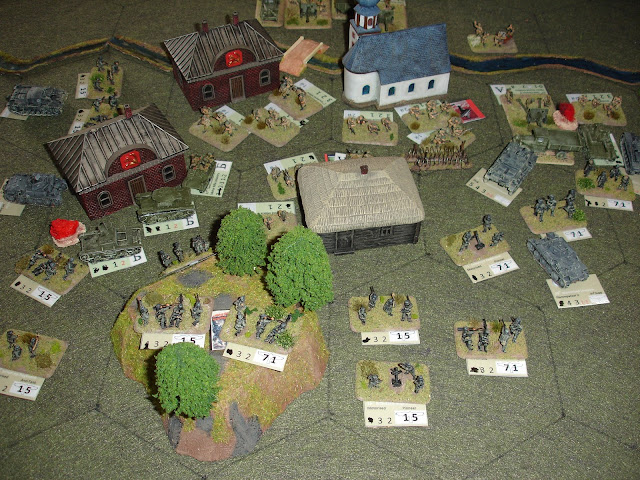 The Germans keep up the pressure. 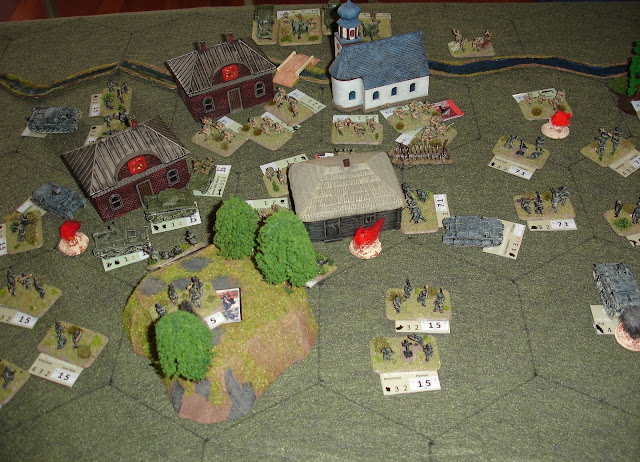 Attacks are now constant.
Luckily the summer days are long. 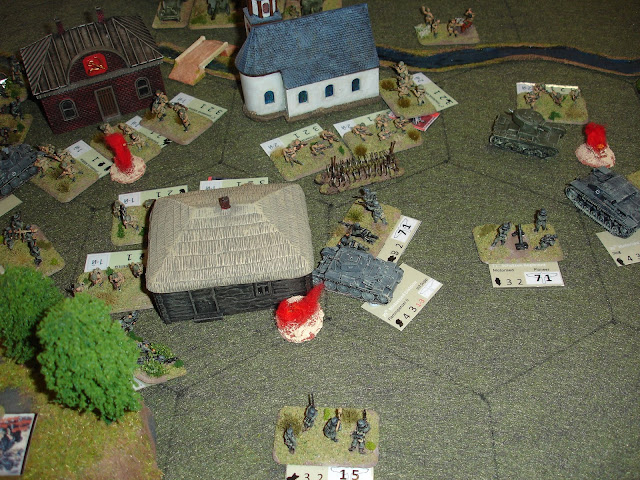 In addition to the rockets, the other German special weapon is the Flammpanzer II.
These are proving very helpful in the assaults on the urban areas. 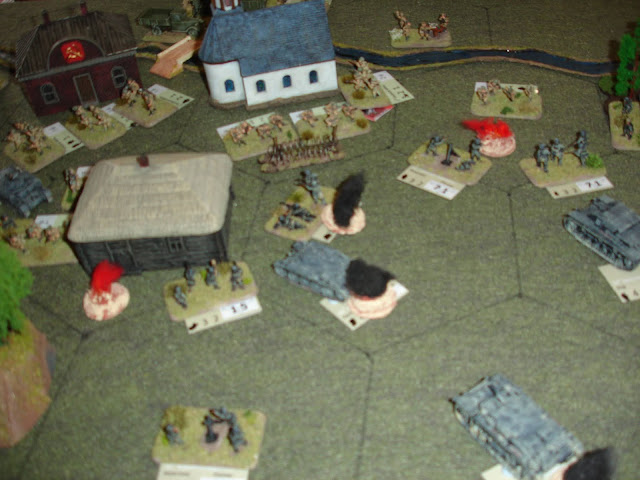 The Germans have now entered part of the city
and have almost completed its isolation. 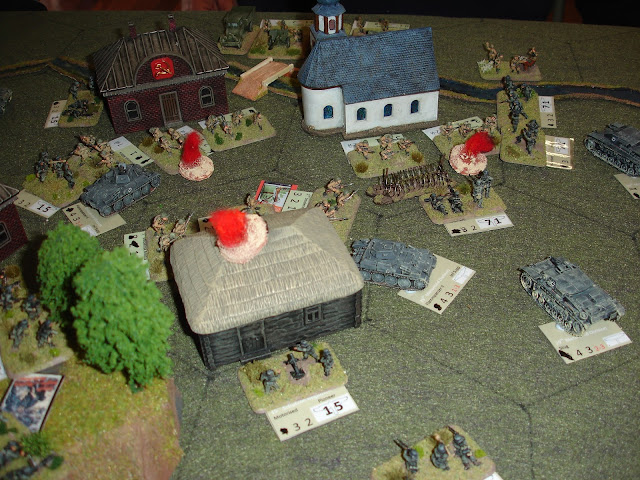 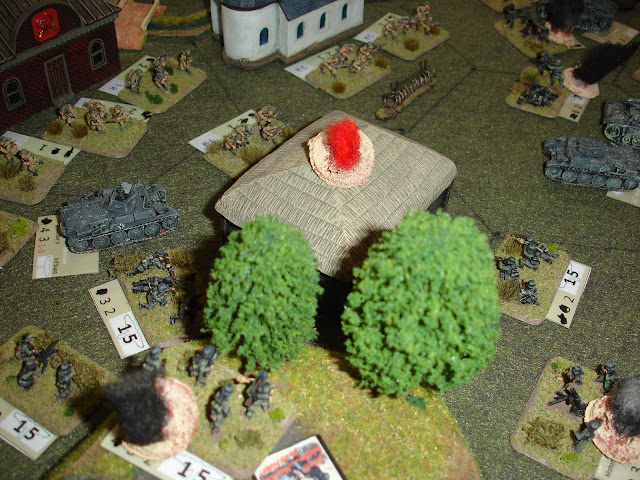 It all comes down to this location
and the weight of German attacks finally succeeds in taking it.
(thanks mainly to a good roll on the dice inflicting the maximum 6 casualty steps)

There was still one or two turns to go,
but both sides were close to spent.

This scenario is a challenge for the Soviets, but had a good historical feel to it.  It was great to use all my new kit along with the terrain I had created for this game.  Another excellent Rommel game using a Hexes and Miniatures scenario.