The snow continues to fall as we move into December. 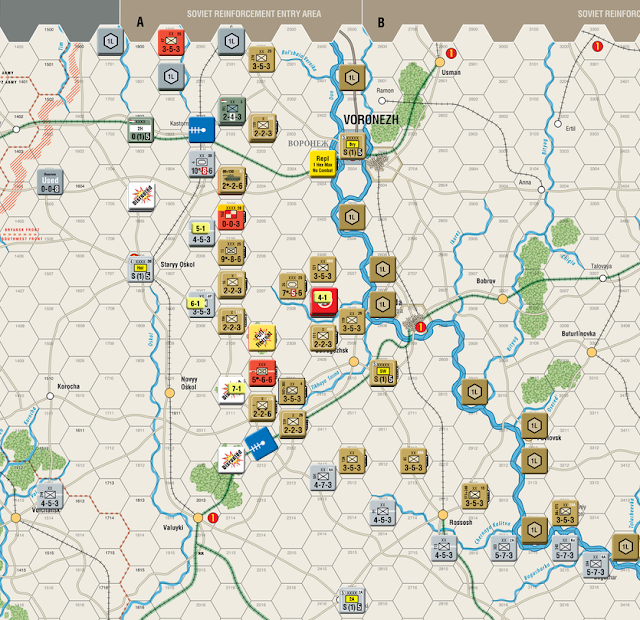 The Soviets have broken through the front south west of Voronezh. 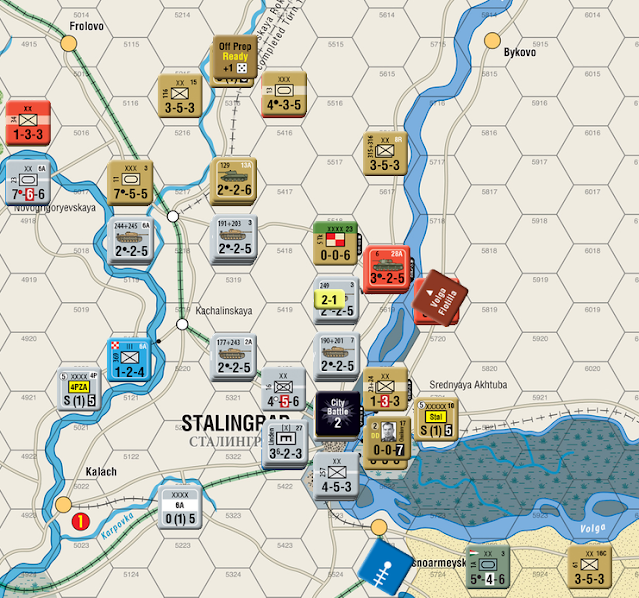 While maintaining the grind at Stalingrad. 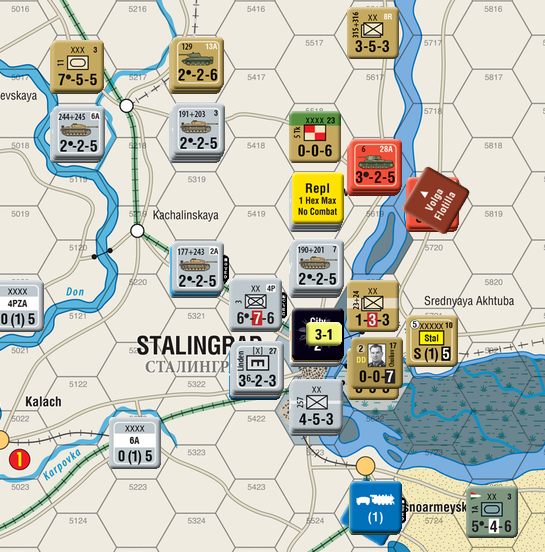 The Axis attacks on Stalingrad only add to the carnage. 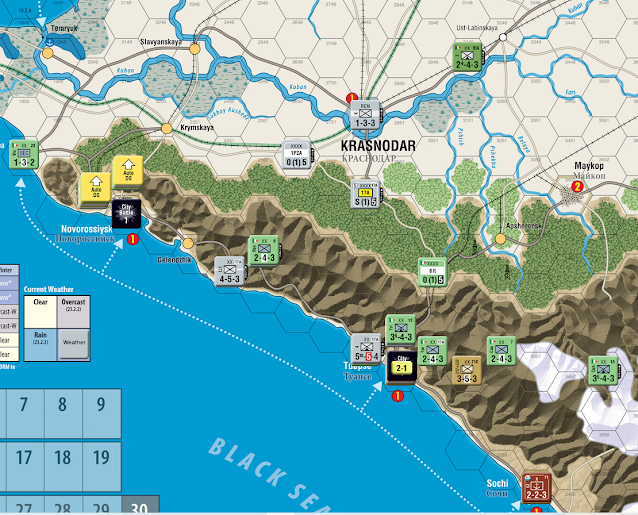 The Axis does have some success on the Black Sea. 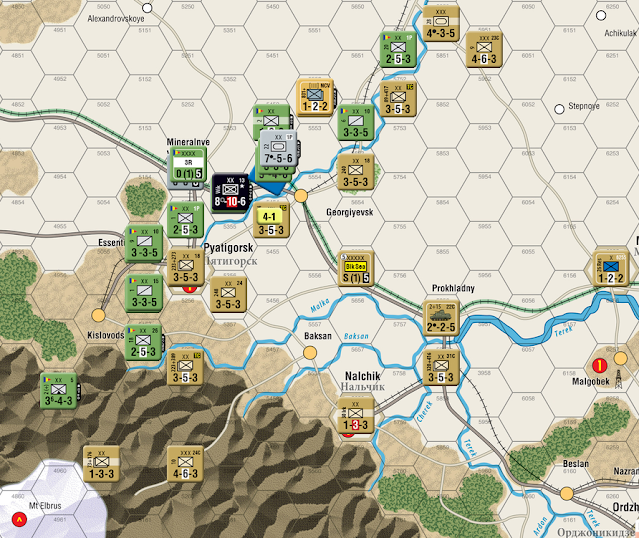 And the final offensive down south has now started. 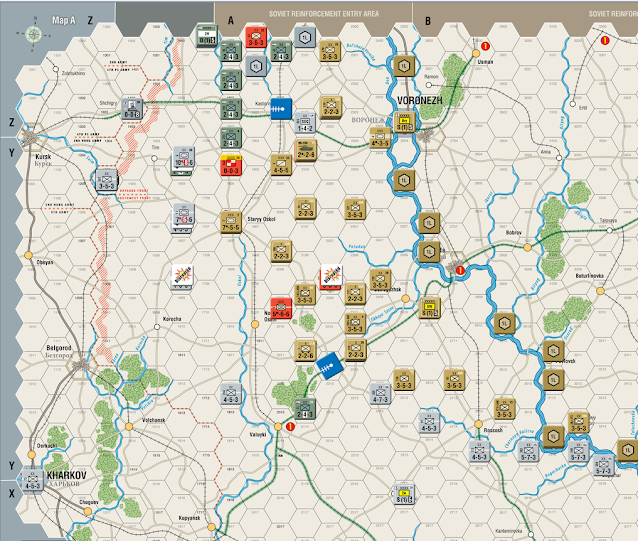 The Hungarians have been pulling back
while German armoured units are been rushed to fill the gap. 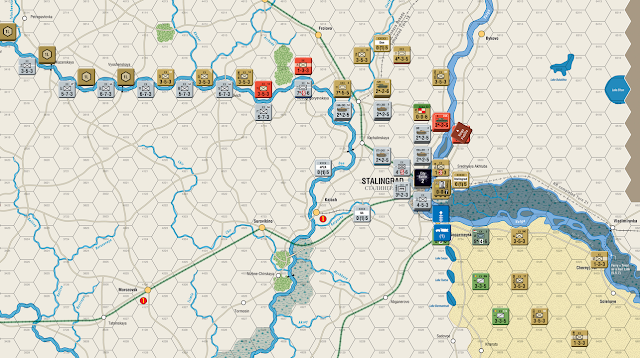 The Axis grip on Stalingrad may have to be lessened.
That is going to be tricky and possibly ineffective
as the Voronezh front is a long way to the rear.

The Axis have an advantage in the south,
but it takes a while for their victorious troops
to move to the next point of conflict.
Turn 32 starts clear. 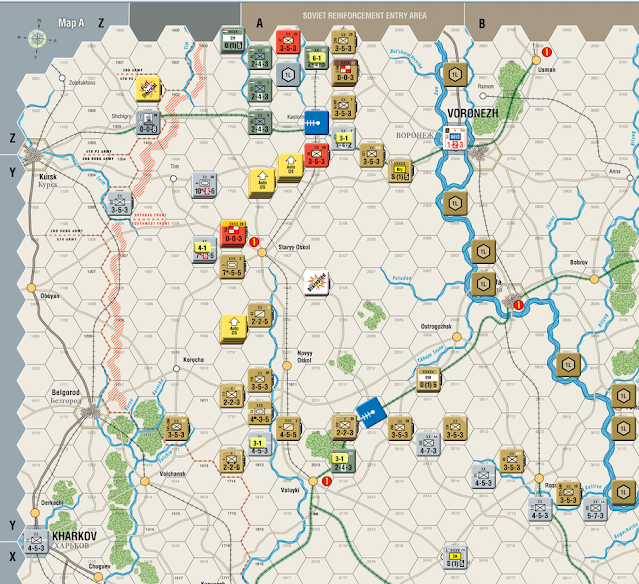 The Soviets are attacking along the length of the 140 mile Voronezh front. 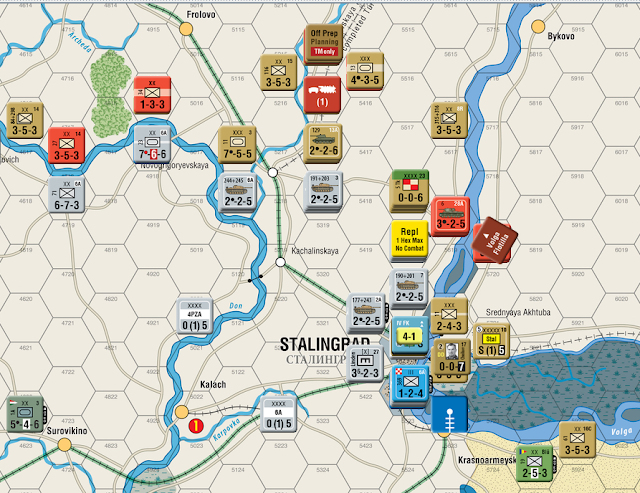 The Axis ignore the Soviet offensive (there is actually little they can do)
but they are getting very close to capturing Stalingrad. 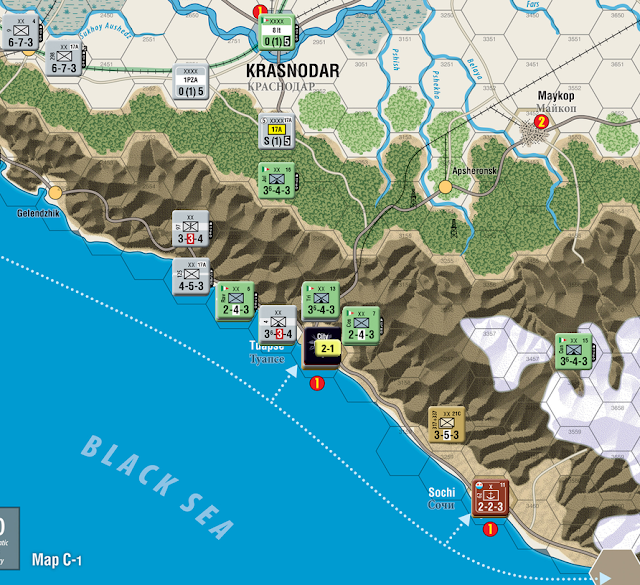 And mopping up the Black Sea ports. 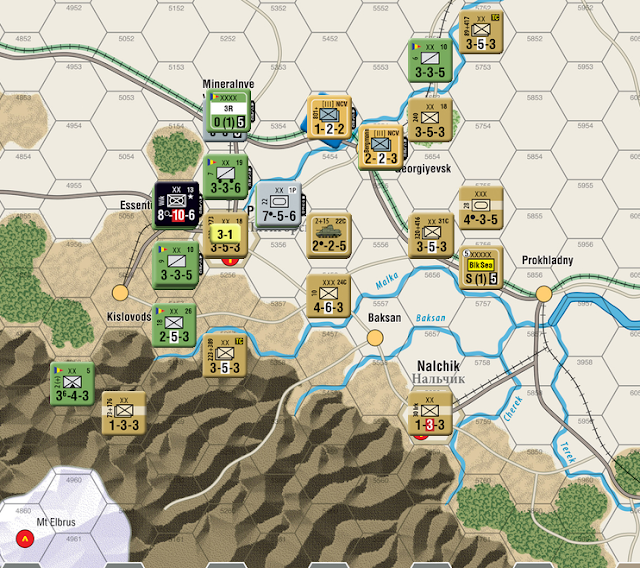 As well as pushing further into the Caucasus 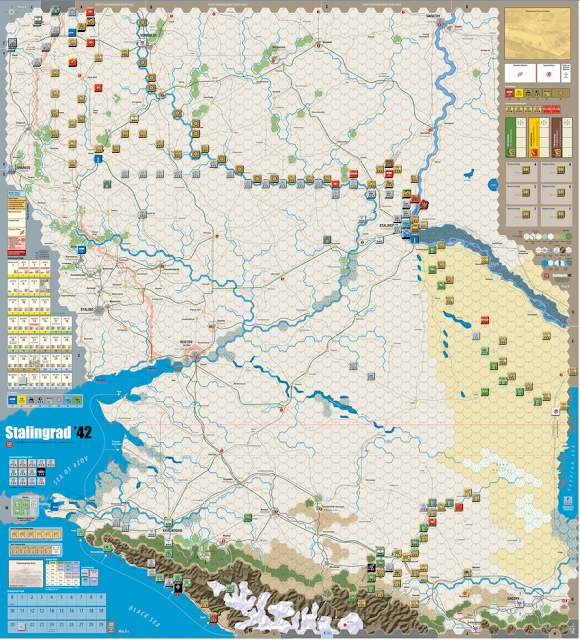 This game is big and it is hard to capture all the action in one image,
but using Vassal and zooming in and out does provide for some nice screen captures.
The snow stops, but the weather remains overcast. 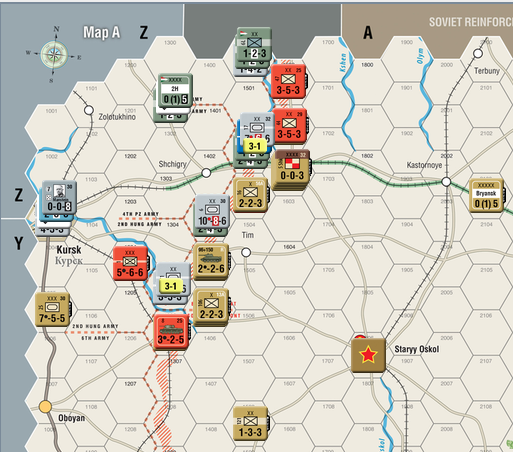 In the west the Soviets have driven the Axis into a corner. 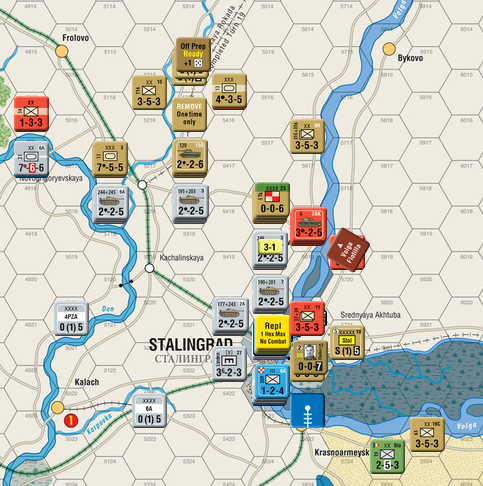 The fighting goes on at Stalingrad. 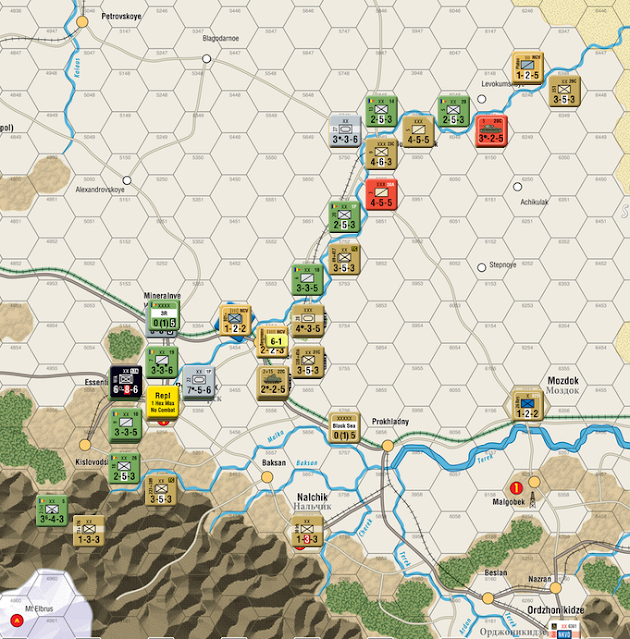 Is this the start of Little Saturn?
More like far off miniscule Pluto. 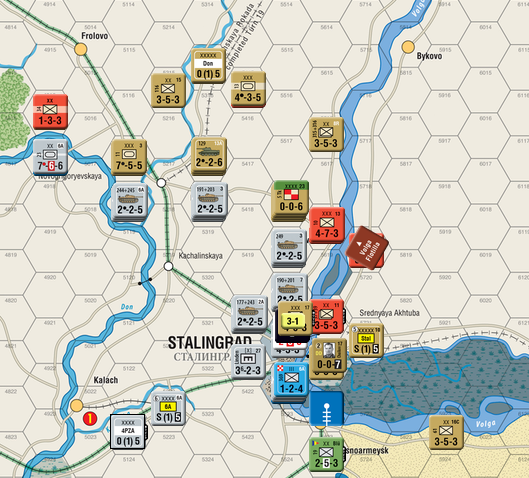 The Axis are getting desperate, but their efforts, though costly,
are making progress, one house at a time. 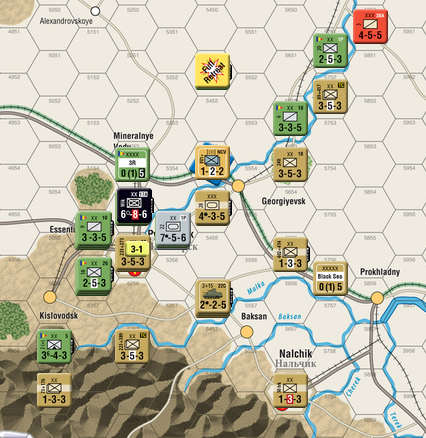 The Axis try again.
They lose a Panzer division in the process. 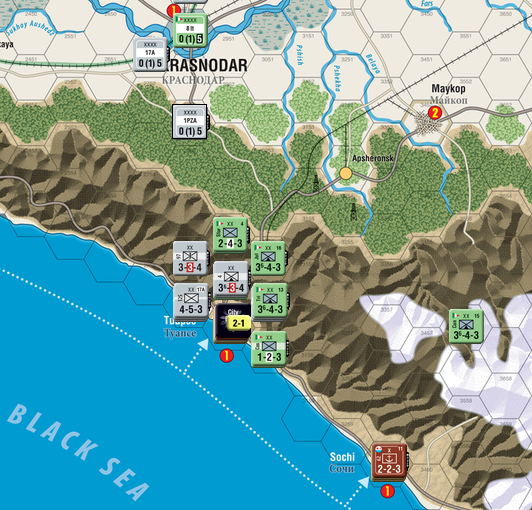 And this was another bloody battle for next to no gain. 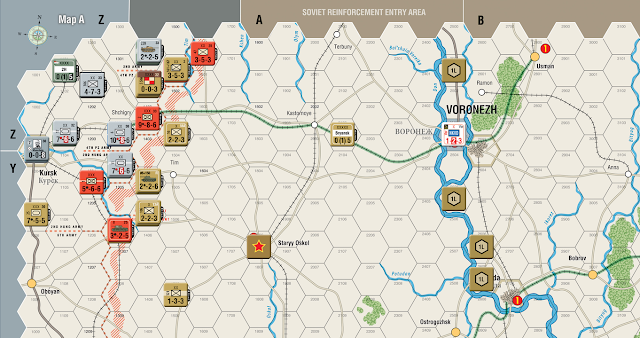 The situation in the north west - the Kursk front. 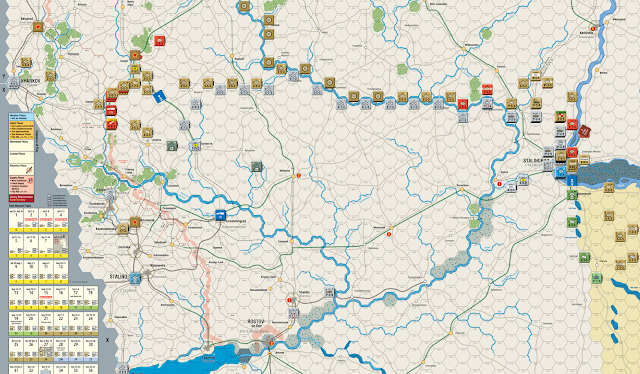 One end of the Axis line is stronger than the other/
Is it the Stalino end or Stalingrad end?
The Soviet repair of the railroad is instant which gives them a bonus.
The Axis have started sending any troops they can spare west.

The Black Sea siege and that in the Caucasus continue.
The challenge for the Soviets is to keep up the replacements here and at Stalingrad.
The Axis don't have that luxury.