This post has been a while in coming, the reasons for which will soon be apparent, 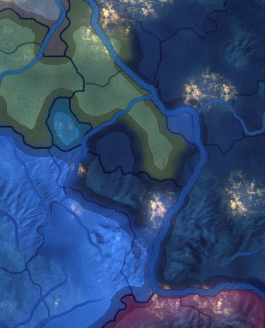 The light green is areas held by Belgium, light blue is France while dark blue is German.
This represents the "contained" German breakthrough, after they were pushed back from Nancy.
September 1940

During September the Axis airforce starts making a presence in the English Channel, however it doesn't seem to be long lived.  I pull the small force of patrolling destroyers out into deeper water (Bay of Biscay).

Fighting continues on the Rhine with much toing and froing.

We start to research army doctrine "Grand Assault", but it will take almost a year to complete.

Germany breaks through south of Strasbourg, but is repulsed.

At this stage Bruce suggests we play something different as the apparent bugs (units not retreating when they should) and poor performance (most likely caused by my underspec new machine that I got cheap) have lessened the pleasure.  Plus we had achieved a major outcome with France not falling and Italy being wiped out.

So we've gone on to play Europa Universalis.

But the game lingered on in my mind...

So I play with the AI controlling Britain.

First thing I find is the British abandon Strasbourg.  I am too slow to get French troops into the city and it falls to the Germans.

The British forces head to the Channel.

At least they stay put in the Alps where the German attacks are unrelenting.

There is a lull on the Rhine, but then the Germans launch a major offensive and start to make progress.  Koln is at risk of being surrounded.

We appoint the defensive general, Maxime Weygrand, to be Chief of Army.

The AI has British troops garrisoning Italy and a heap in the UK.  Not sure what they are planning (I originally thought a naval invasion of Germany) but they will need to get control of the Eastern North Sea first and I don't see that happening.

It took me an hour to play the one month.
Posted by Sun of York at 1:01 PM