Fighting rages on the Rhine and in southern Italy, where the Italians, now devoid of German support, look like collapsing.  Indeed Rome falls on 21 February 1940.  But the Italians fight on.

We launch a second offensive on the Italian Alps.

Colonial industry starts to come online.  France is desperately short of industrial capacity and is not keeping up with equipment losses.  We are getting Lend Lease trucks from Belgium, artillery from the US and (later) rifles from the UK.

De Gaulle plans an offensive against Koln (19 March).  It is a fizz (due to the AI misbehaving and continual destabilising attacks from the Germans and ineptitude on my part most likely).

Late March and our Italian offensive is starting to make progress.

Argh!! There are mutinies in the Army.  We attempt to surround the mutinous troops with loyalists and carry on.  Perhaps that was why De Gaulle's offensive failed?

In April 1940 the Battle for Turin and Genoa starts.  Turin is captured by mid April.

The mutiny is crushed by 26 April.  Phew. 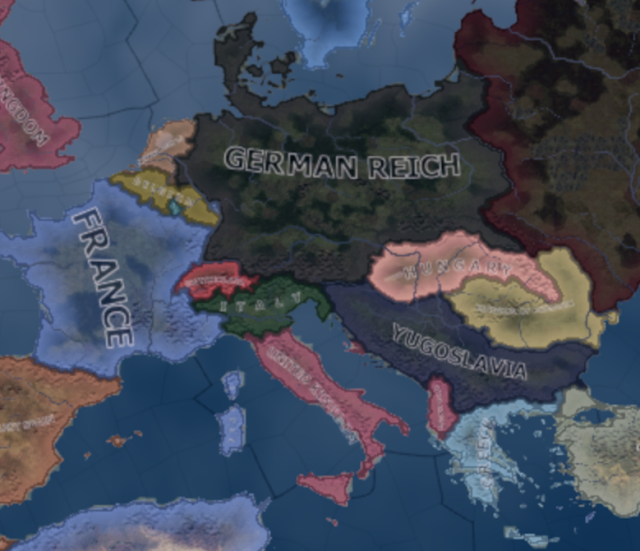 The situation at the beginning of April 1940.

One of the odd things in the game is how the minor countries can grab territory even though other countries fought for it and won it.  Belgium is a case in example.  All gets sorted out in the eventual peace conference, but meantime they get all the resources.

After the mutiny at the beginning of the year, France then faced elections in which the Communists gained ground.  I decided to go for a broad coalition of democratic parties to try and head them off, even though it did decrease the country's stability.  France is not easy to play.  Just how hard it is I was about to find out.

Fighting continues on the Rhine frontier.  It is impossible to coordinate with the Belgians.  The airwar is also going badly.

Genoa falls on 3 May and shortly after Italy capitulates.  There is then the race to get to the Austrian alps.  Our southern front is able to advance to just outside Innsbruck and Salzburg, before German resistance empeds further progress.

The USSR declares war on Finland and makes the country their puppet by mid June.

The French plan a big offensive against Salzburg.  It is a failure.  The French army just doesn't have the capability.

With the demise of Italy and the security that brings to the Mediterranean, I start to move some naval capacity to the Indian Ocean.

As June closes, US troops are observed moving into Norway on the border with Soviet Finland.  This could be interesting.  What are they up to?