We are across the Rhine!

The Spitfire arrives.  We licence it from the UK and commence production.  Our air force has been pulled back to rebuild, so here's hoping new technology will allow us to challenge the skies (I think the problem really is production volumes rather than equipment quality).

One of the "flaws" in the AI is that it masses enemy airpower in single regions.  So they are overwhelming in one spot (Western Germany with fighters, or East North Sea with bombers) and absent in other areas (Italy).

10 July 1940 and the Soviet Union announces it is prepared to offer security to the small nations of Europe.  That's so sweet.

The Germans are now cleared from the west bank of the Rhine.  Hurray!

But on a bleak note, France has run out of manpower.  I can increase mobilisation, but I need political power to do that and that is something seriously lacking in France (particularly when playing on Elite level).

Britain is a similar state, with battleships it can't launch for want of crews.

The battle for Essen commences. 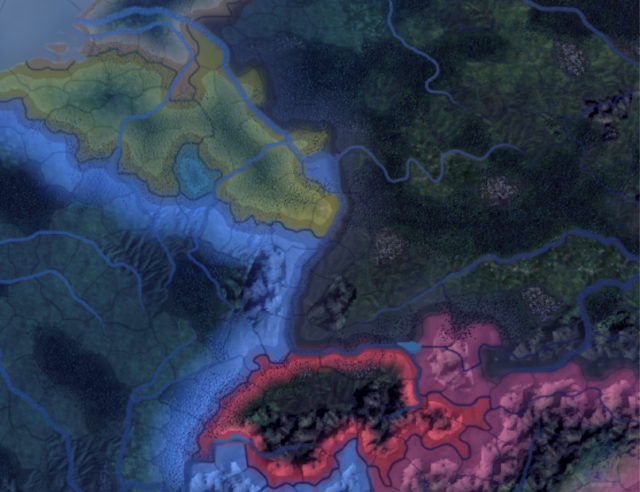 This is probably the Allied high water mark, July 1940.

We've been having performance problems with the game, both in terms of speed and responsiveness to commands.  Apart from the fiasco with the British fleet (wiped out as it refused to move out of the Eastern North Sea for two months or more), there is also the situation were exhausted troops won't retreat or worse when they have they just sit there thinking they are still in combat.  Now possibly you could explain that in some historical sense, but it seems more like a bug.

4 August 1940 and we here about the assassination of Trotsky.  Seems the Russians have form in killing exiles in foreign countries.

There is ferocious fighting against our Rhine bridgeheads.  It is annoying (although this is about to get a lot worse), in that the territory has been claimed by Belgium, but they are not doing much to help defend it.

There is also fierce fighting in Austria against Innsbruck and Salzburg.  We capture the former but the latter is saved by the timely arrival of Germany's allies the Hungarians (who obviously don't work under the same guidelines as the Belgians).

23 August 1940 Germany has broken through the Maginot line and reached as far as Nancy.

Admittedly we were focused on Austria.

I can only think that either I made a mistake in shuffling troops around defending the Rhine and somehow left an area undefended (possibly due to failure of my command to move a unit to register due to game response problems), or that somehow the Germans got lucky in an attack (hadn't been the case so far).  The area they broke through is the skinny tile, four up from the Swiss border

This is a disaster.

The race is on to plug the gap.  The Belgians just sit there doing nothing.  The French move so slow and end up getting pinned down.  Luckily the British (and Bruce's skill) manage to create a defensive line and start to push the lead German units back.

At least we now have the political power to be able to implement extensive  conscription.

We do recapture Nancy.

In our hour of need Belgians decides to cancel their Lend Lease agreement with us.  Are they thinking of deserting the cause?

2 September 1940 and we call off the offensive in Austria.

I am no longer feeling confident.

I blame Bruce as he said the game was getting bogged down like the WW1 front.  Hmpf! Too much excitement now.