Updating the Seven Pines scenario for the Brigade Fire and Fury 2nd Edition rule set was relatively straightforward.  All the Union were green and the Confederates experienced.  Everyone was armed with Rifle Muskets except Union cavalry which had breechloaders.  The Confederate artillery was Rifle Smoothbore and on the Union side,  Casey's batteries were Napoleons and Crouch's Light Rifles.  I didn't look at a casualty level or an objective and stuck with the original VP schedule (which is missing in the 2nd Edition?).

I had made a personal commitment to myself to read the new rules and was glad to have achieved that.  The rules played well.  It helped that Graham, who was observing, also had a copy of the rules and was able to act as a second referee.  Mark W took the Confederates and had a bit of a hard time until he discovered the secret was to throw tens.  Michael was the Union. 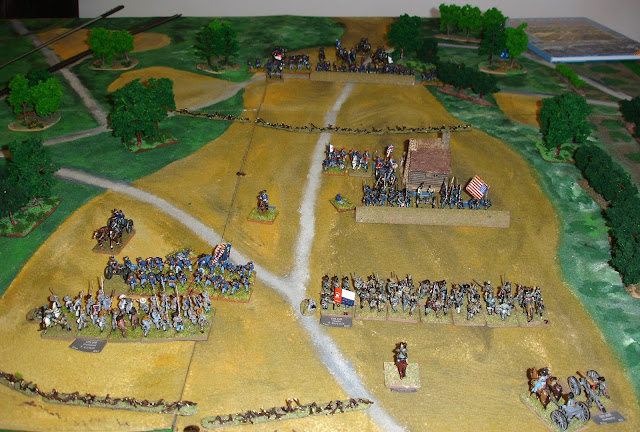 The Confederates have pushed back Palmer's brigade, but have been halted by Naglee.

The Confederates follow up their success with a breakthrough attack on Palmer. 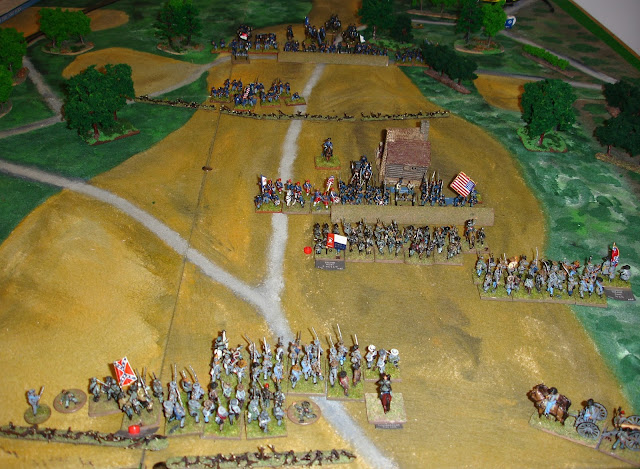 But the Union pushed them back. 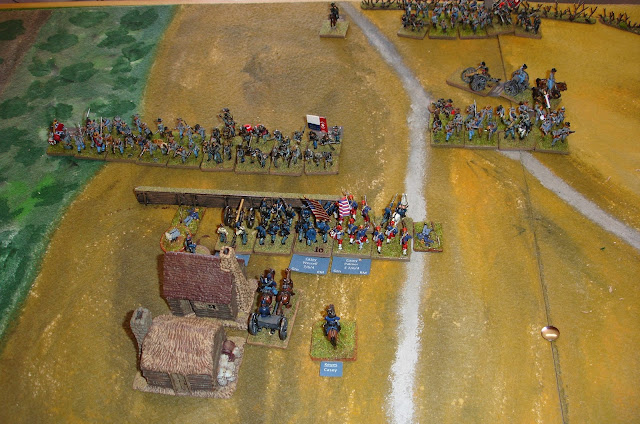 The view from the Twin House redoubt.
On boths sides brigades were quickly becoming spent. 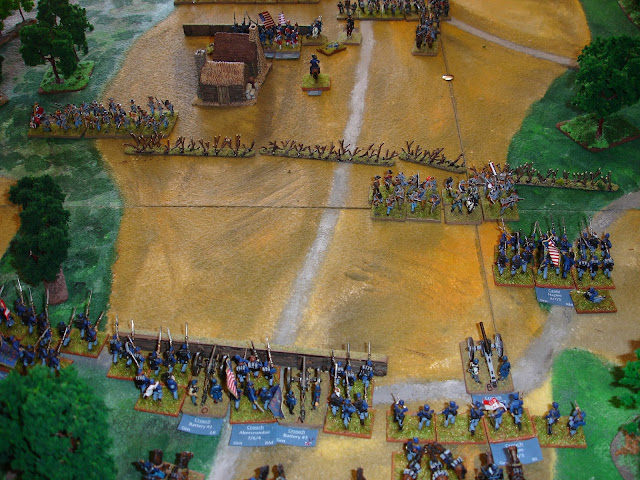 The view from the Crossroads Redoubt 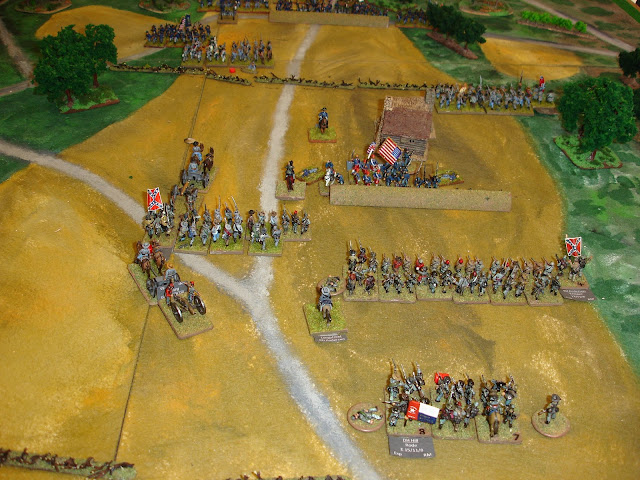 The Confederates are still fighting to gain control of the Twin House redoubt.
Ultimately both Union brigades, much reduced, involuntarily pulled back. 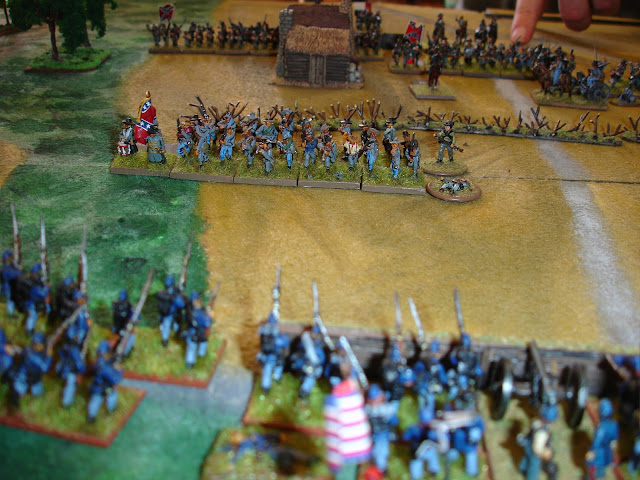 With that objective achieved, the Confederates pushed on to the next one. 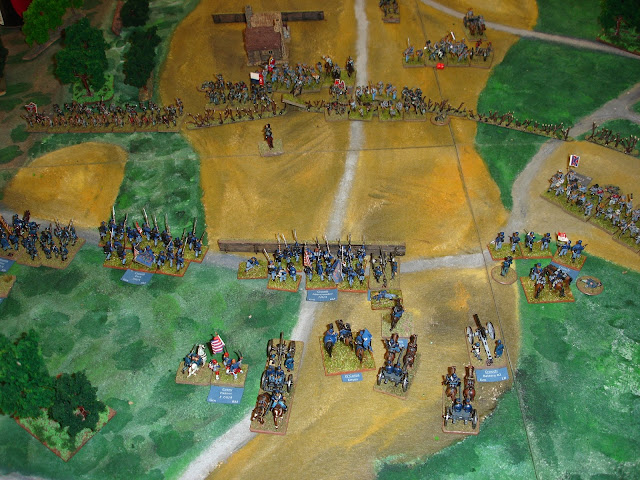 16:00 and both sides have reinforcements that appear on the respective enemy's right flanks. 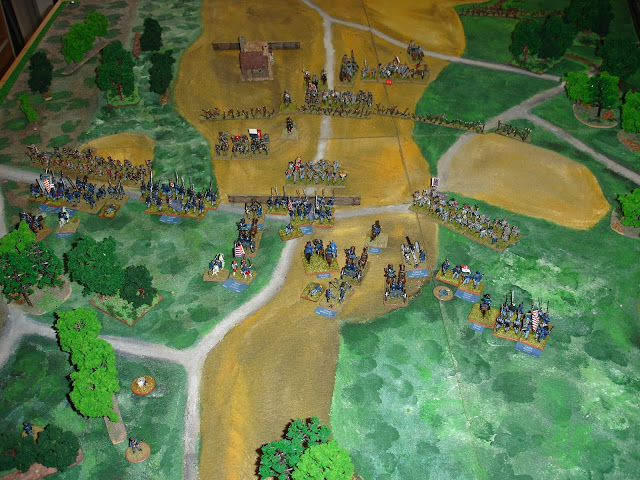 The Confederates meet with success on both flanks... 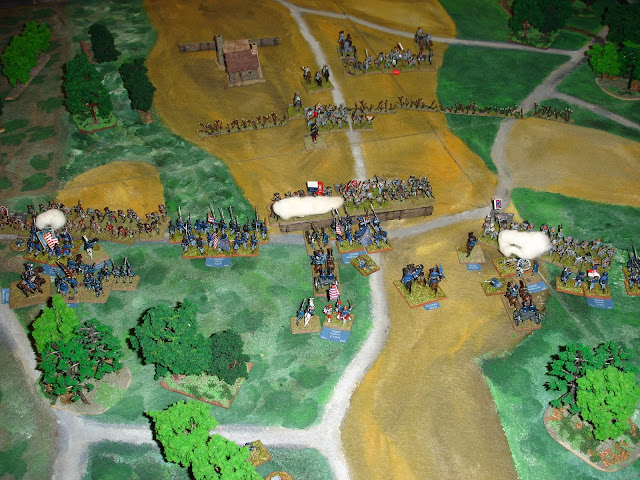 But time is running out.  These last desperate attacks had limited success on the each flank and were repulsed in the centre.

The Confederates had one wrecked battery, three spent brigades and one worn; 8 victory points for the Union.  The Union still held the cross roads which gave them an extra 5 point.

The new rules played well.  A bit more detailed, which is perhaps justified as it covers weapon types and troop quality which were a salient point in ACW battles.  The maneuver and fire tables seemed a bit more decisive.  I like the new fire combat system and the introduction of broken units.  In fact there was nothing I didn't like.  In the five hours of play I think I referred to the rule book once (to check you could charge in echelon - you can), everything else was worked out from the QRS.

The rule book is of excellent quality, particularly the examples and the inspiring photos of actual Fire and Fury games.  The 1st edition was of course a quality product in this respect as well.

I'm looking forward to my next game.