Greek Galleys a Go Go with Galleys and Galleons

Today Mark Woods and I tried out Galley and Galleons with 24 galleys aside, organized into three squadrons each.  Each squadron had a Royal Flagship (large polyreme Q4 C5), three Quinqueremes (Q4 C4) and either three or two Trihemolia (Q2 C2) or three or two Triremes (Q3 C3).  We used the rules as they were except that a differential applied in ramming if there was a difference in damage factors between the ships (i.e. an undamaged ship ramming a damaged ship would have a -1 benefit.  If the target had two damage this would give a -2 benefit.)  This turned out to be very effective and perhaps should just have been a max -1 in line with the factor that applies to the difference in combat factors.  But damaged ships would be much more susceptible to ramming or in their ability to ram ships that had lesser or no damage.  It also produced results as causing excess damage by ramming sinks the ship (my interpretation).

The galleys starting rowing cautiously towards each other

Seen from the right of Desaki's line. 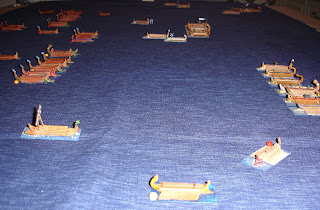 And from the right of Mikalis 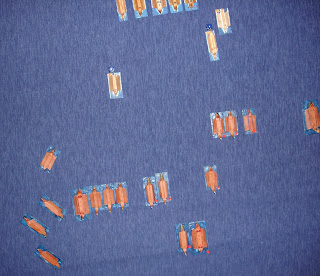 The centre squadrons were in action first with Mikalis' Quinqueremes getting in some long range shots from their catapults and other mounted engines of war. 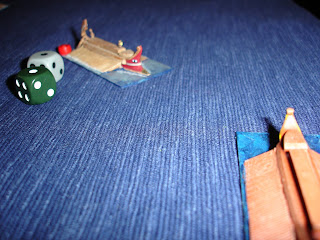 A failed activation saves a Mikalis ship from a potential ram.
We had a number of these "events" and it lends well to the excitement of the game. 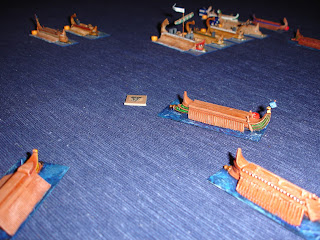 Mikalis' ships get the first strike against the Desaki's centre,
smashing a ship to bits

By now the centre is heavily engaged and one flank is also getting into action,
but the other flank seems somewhat reticent. 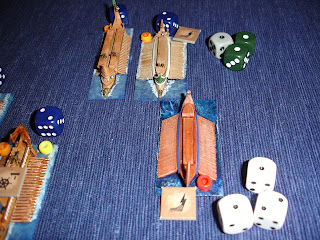 A full on Yahtzee!
Both ships suffering oar damage.
Maybe head on rams should be more about oar rakes? 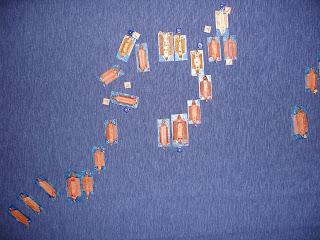 The Desaki centre is shrinking or is that sinking? 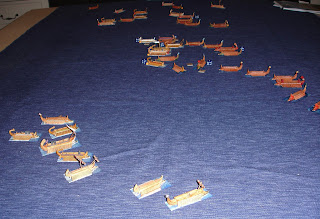 The Desaki right are slow to get in position.
This is good as the opposing Mikalis ships have been very tardy. 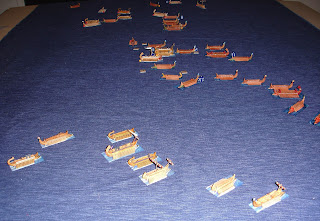 But now they are approaching. 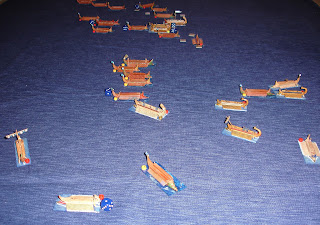 The ships on the other Desaki flank are maneuvering around the Mikalis ships. 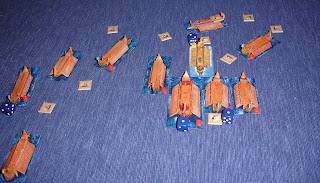 The destruction of the Deskai centre continues.

Note: the coloured beads (or absence of) denote the different fleet squadrons. 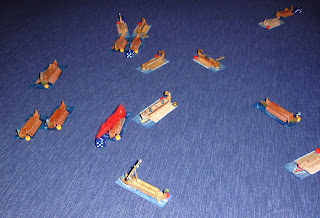 One of the Mikalis ships is on fire.
The critical hit table might need a revision for ancient galleys. 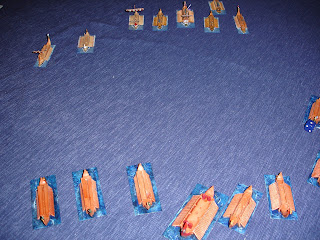 The distant flank.
Mikalis ships still trying to get into line.

The Desaki's centre has been destroyed,
just as they started to make some progress with their left
and even get their right into action.

I continue to be impressed by the Song of Blades and Heroes mechanics.  While 24 ships a side might be challenge, the game played without difficulty (except I could have done with a summary of the rules as they applied just to galleys as being an itinerant player I had to look up a number of things, not just because I'm a rules pedant, but I wanted to confirm I was basically playing the rules as written for future reference).

We didn't have any terrain (obviously), but one option would be to replace sunk (more accurately wrecked and/or floundering ships) with base sized makers that would then denote shallows or equivalent hazards.

Lots of fun and great to be able to use the stunning 1/600th scale models by Xyston.

Thanks Michael for the loan of your fleet, it did you proud!