It feels like 200 years ago, but I did my bit to celebrate the bicentenary of the Battle of Waterloo.  It is great to see the article by David Burden and James Fisher in the April 2016 issue of Miniature Wargames. It is also great to see that one of my comments also made it into the article.  Ah fame...

However I think my comment lacks something without a bit of context and so, by the power of the blog, I will expand.

This is what I provided for the article:

Very happy to do this, but I'm pressed for time as I'm off overseas tomorrow and not yet packed.  I've cc'd Mark B in as one of the photos is his and as Napoleon he is best placed to provide any follow up comments in my absence (I'm back on the 27th and hope to have some ability to check emails etc before then, not that I intend to, much). 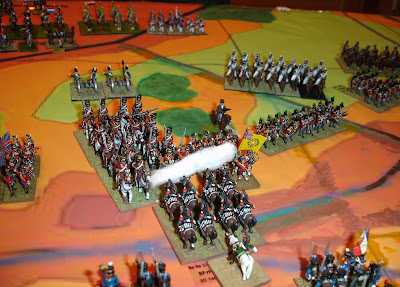 DSC02514 is from the NWS 15mm Waterloo game and I picked it because it has the superb AB Scots Greys painted by Mark Woods.

The NWS was able to game Waterloo using Napoleon's Battles thanks to the generous nature of club members and friends contributing figures and helping create the terrain.  Sadly we ran out of time on the day. 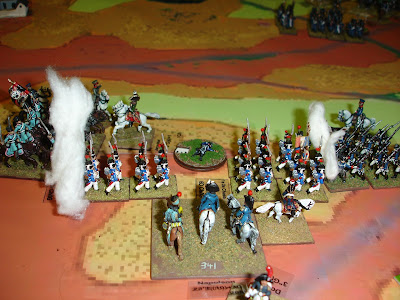 DSC03299 is from our rerun of Waterloo that took six sessions to complete and I picked it because it shows the climax of the game at literally the eleventh hour (as in the last turn of the game).

We came together to refight the game again and this time completed it in a very relaxed and sociable six sessions (by which I mean we spent more time chatting and drinking than playing).  And a very exciting game it was.  The French wasted no time in attacking, someone had told them the Prussians were coming.  Just in time they defeated the Anglo-Allies and were able to turn their battered forces to face the Prussians.  The Prussians found it hard going but Blucher launched a very successfully charge as dusk was falling and almost captured Napoleon. 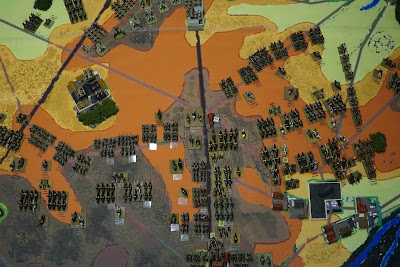 Binder1_Page_03 is Mark B's shot of the French set up and is probably my favourite as it shows the majesty of the French forces all laid out in proper wargaming fashion."

It of course bares no relation to what was published.  That must have come from my response to the survey and (I'm guessing as I don't have access to my completed survey) relates to some preliminary work I did with my gaming group to find out if there was a consensus about Napoleonic wargaming rules and figure scale.  There wasn't as can be seen in the analysis I provided in this post:
http://napoleonicwargamingsociety.blogspot.com.au/2014/09/nws-survey-part-1-waterloo-1815-2015.html.  This same lack of consensus on scale and ruleset is also born out by James' and David's survey.

As stated in the Miniature Wargames article they found that celebrating the 200th anniversary had started even earlier and in that context, and with the section on scales and rules, the comment attributed to me is certainly relevant.  The commentary I had provided was very focused on Waterloo.

What I can't provide is a link to the actual article, but maybe James can...