Last night at the NWS I was lucky due to being unlucky to fit in two games.

First up I piloted a Fokker D VIII against Stephen's Bristol F.28 Fighter on his wonderful original Wings of War mat. 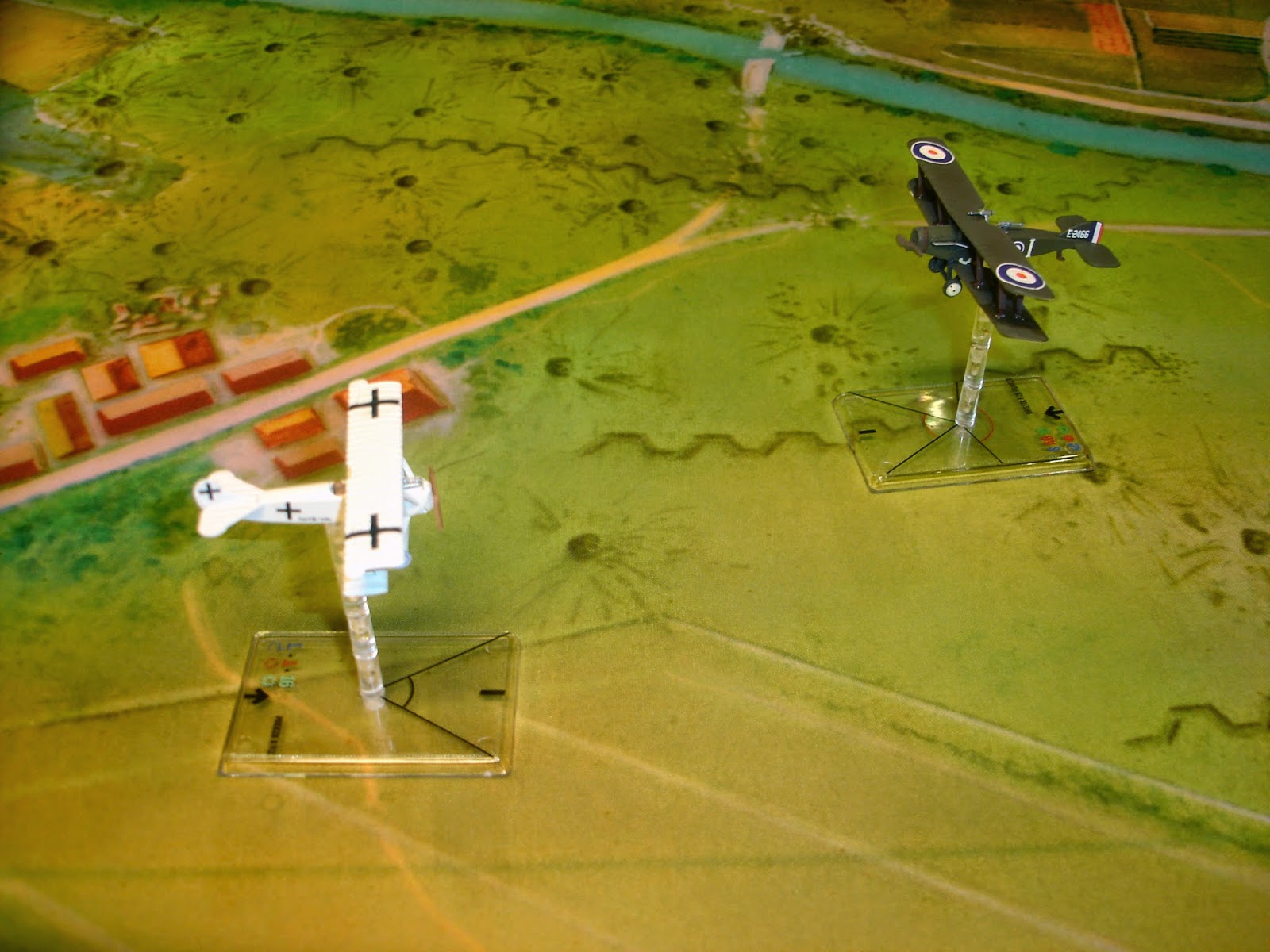 Turn one I got a shot in and took no damage in return, but drats!  My guns jammed.

Turn two we I flipped round and I got shot at again for no damage by the rear gunner, but now he jammed and I was unjammed. 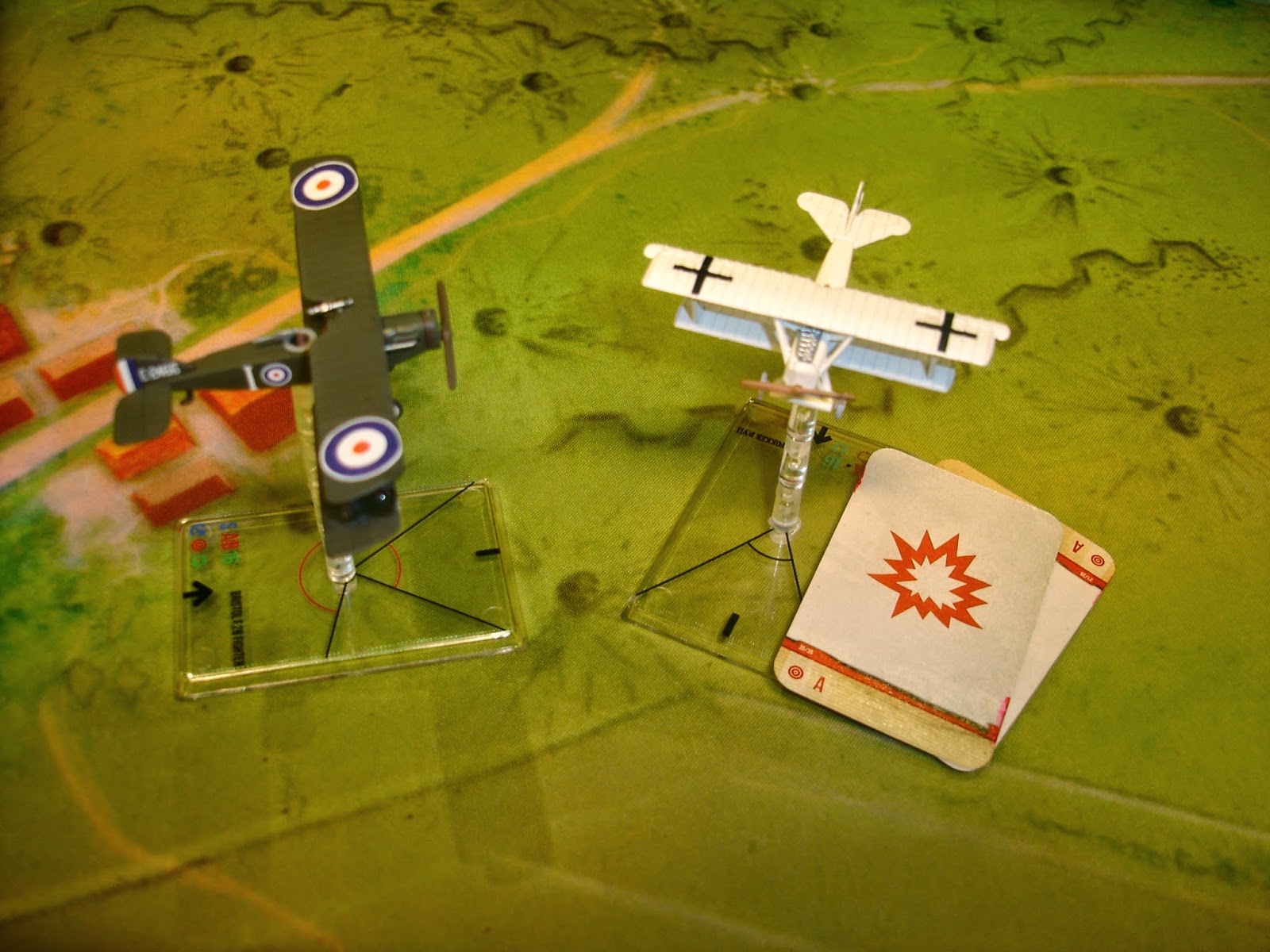 Turn three I circled round (wonderfully maneuverable is the Fokker) but failed to line up for a shot.  However the Bristol got me (having completed an Immelman turn and getting his front gun into action.
I drew that damned explosion card.

However as unlucky as that was it did mean I got to take part in a big game of zombies using rules and figures from Simon and zombies from Marty as well as some stunning ruined buildings from other members of the NWS. 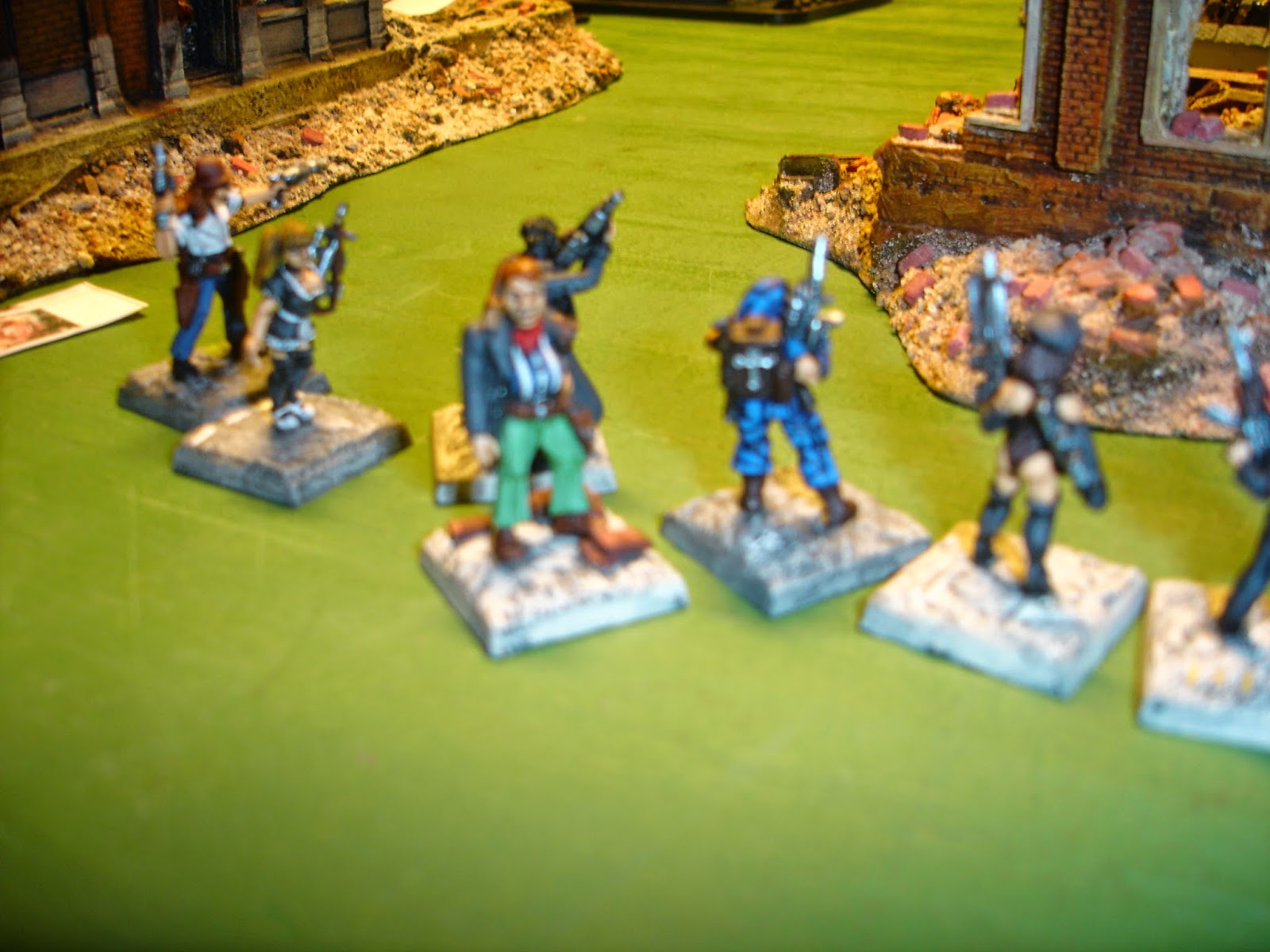 My team, two guys armed with pistols (good for close up zombie fighting) and the rest of the guys and gals armed with assault rifles for long distance work.  He's a bit out of focus, but I love the dude in the green pants with the beer belly looking around to check no zombies are sneaking up. 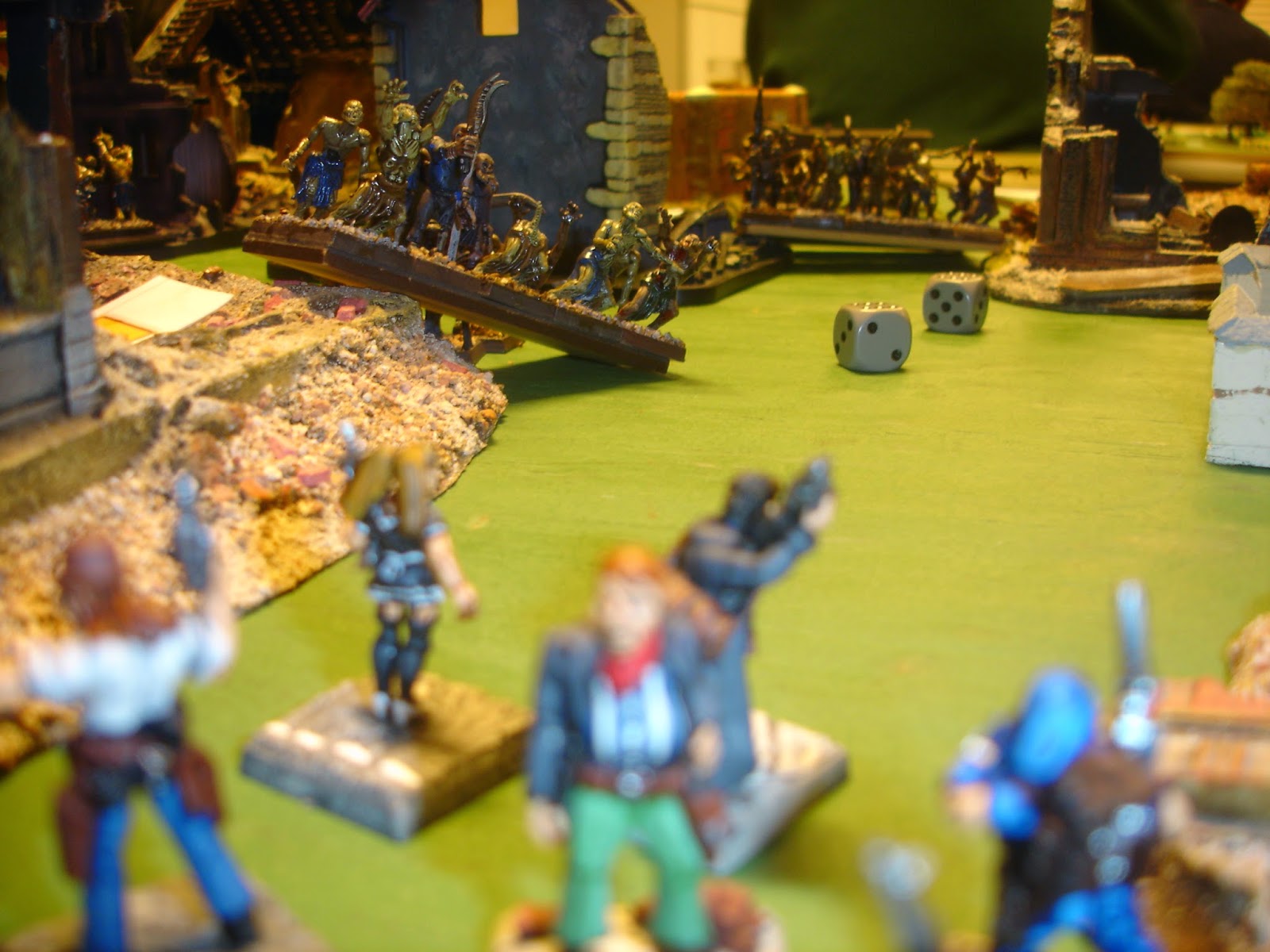 Here they come!  You can hear them shuffling forward as the dice roll. 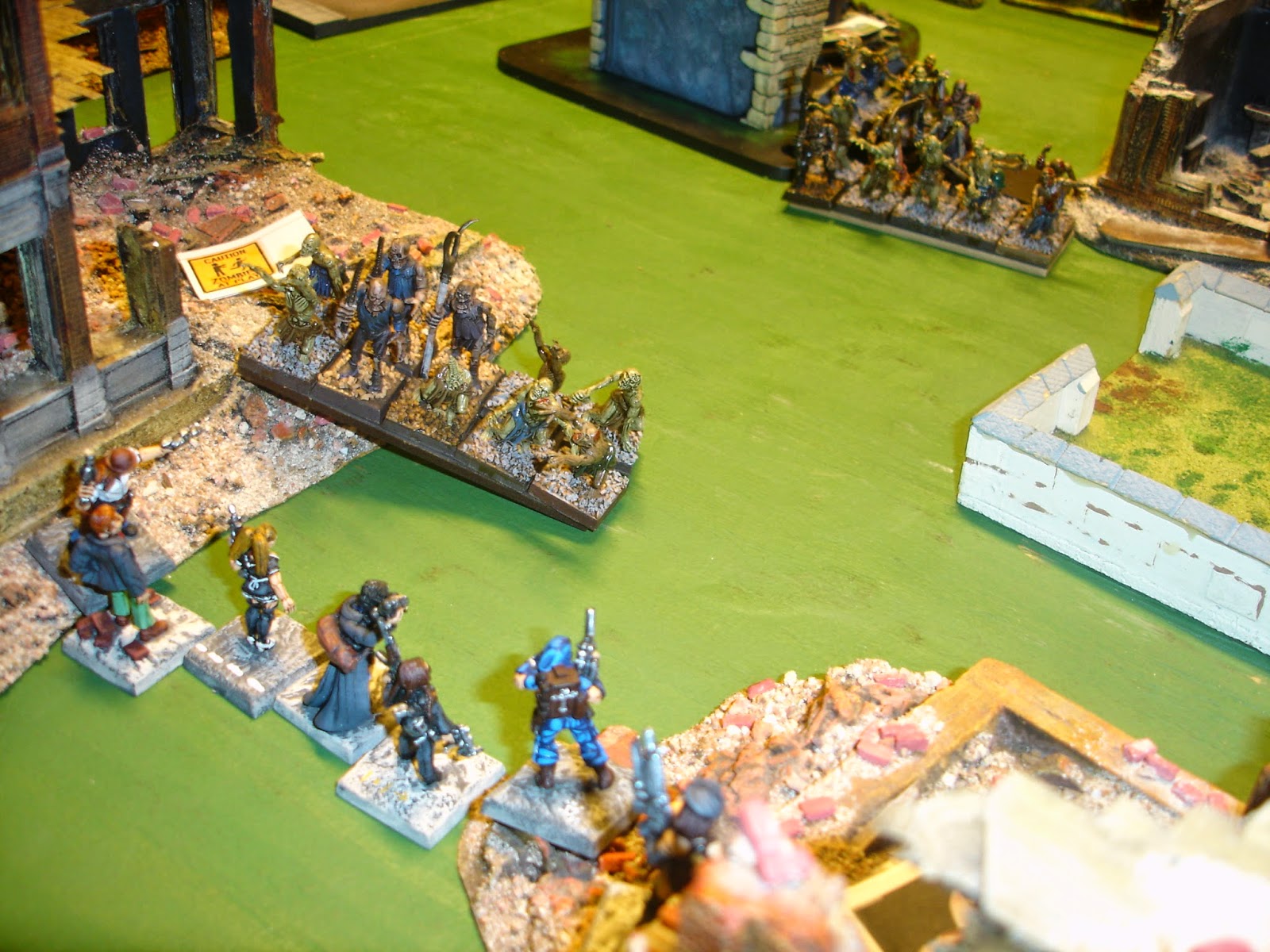 The tokens (rectangular pieces of lamented paper with "surprises" printed on them) are victory conditions (but of which I will say no more as I hardly picked up any). 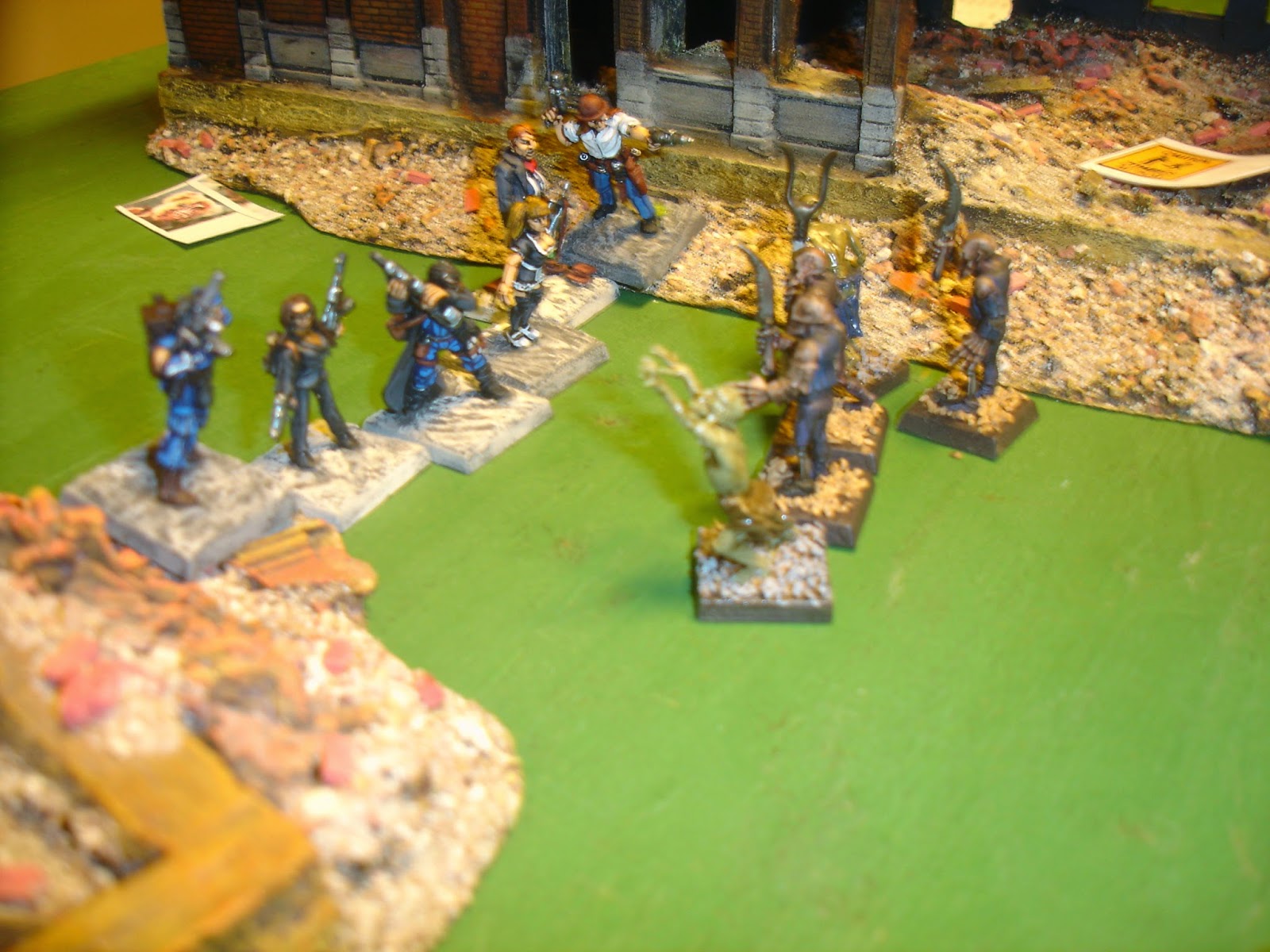 My fire had whittled the first mob of attacking zombies down, but then they were amongst us. 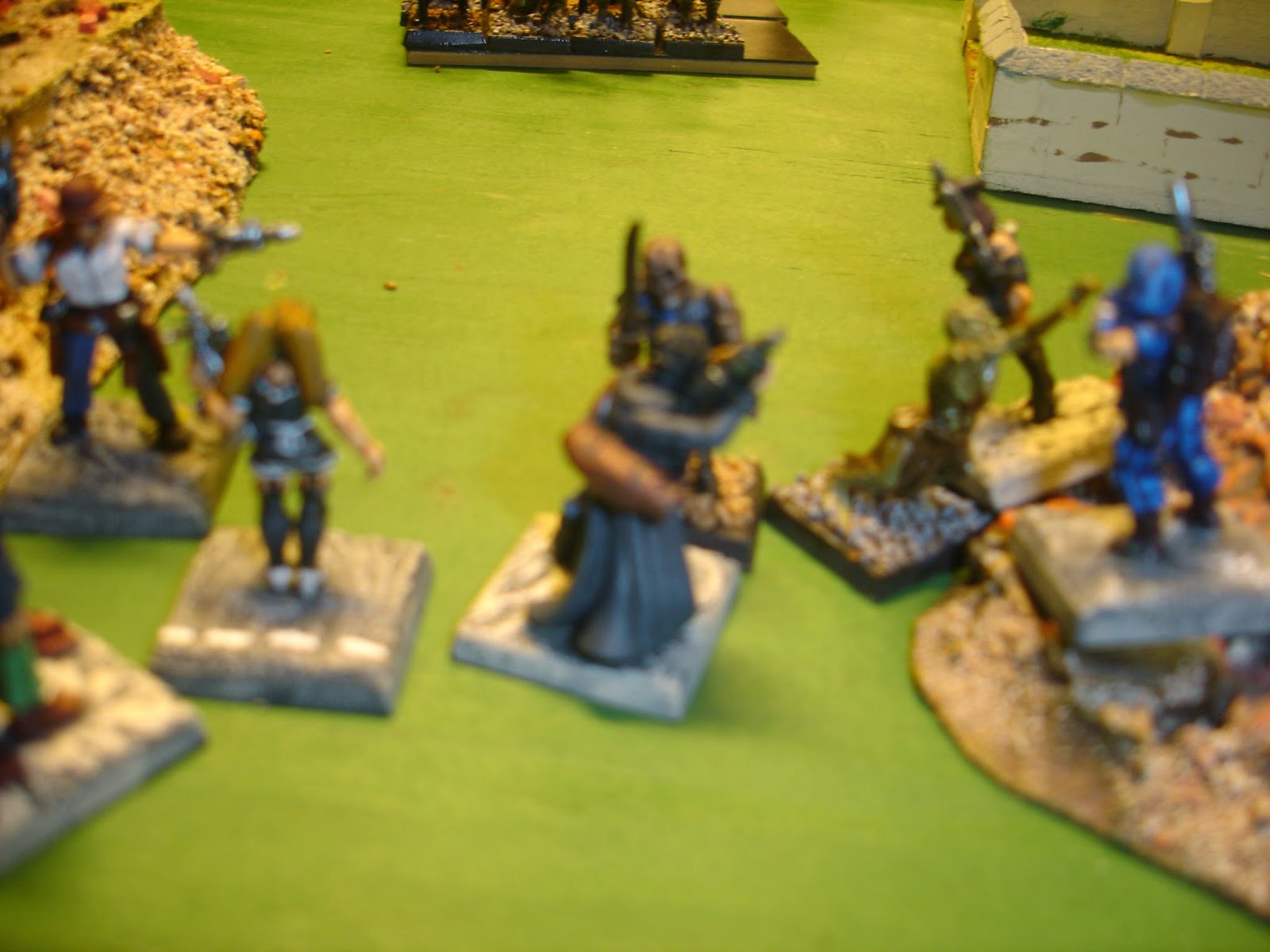 Another blurry shot (camera man is in need of a tripod to steady his hand in the excitement of combat).  The zombies were eliminated, but I lost a team member. 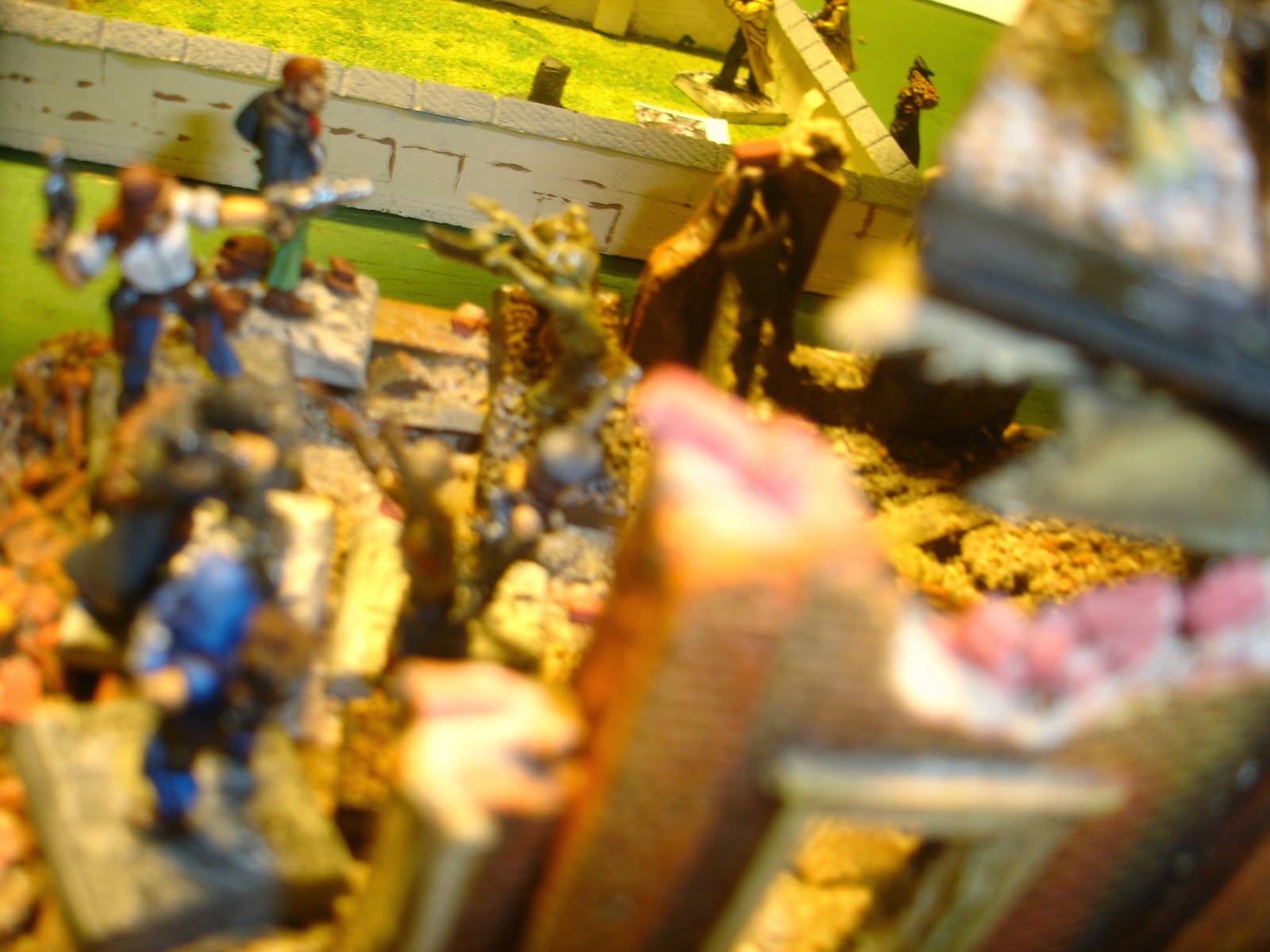 We then explored a ruin and picked up our first token only to find it was another mob of zombies. 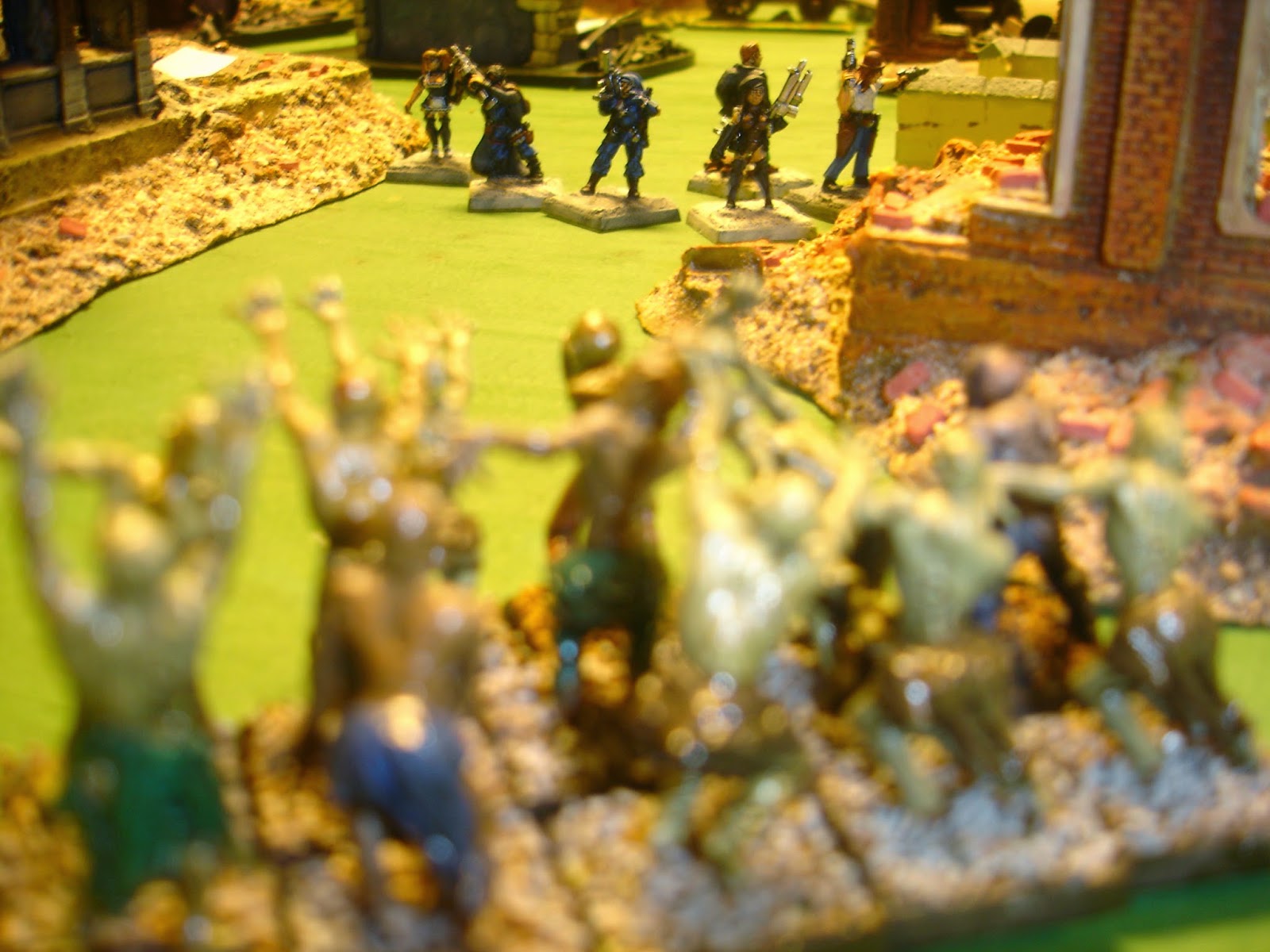 We pulled back laying down a bit of fire trying to thin them down before the inevitable. 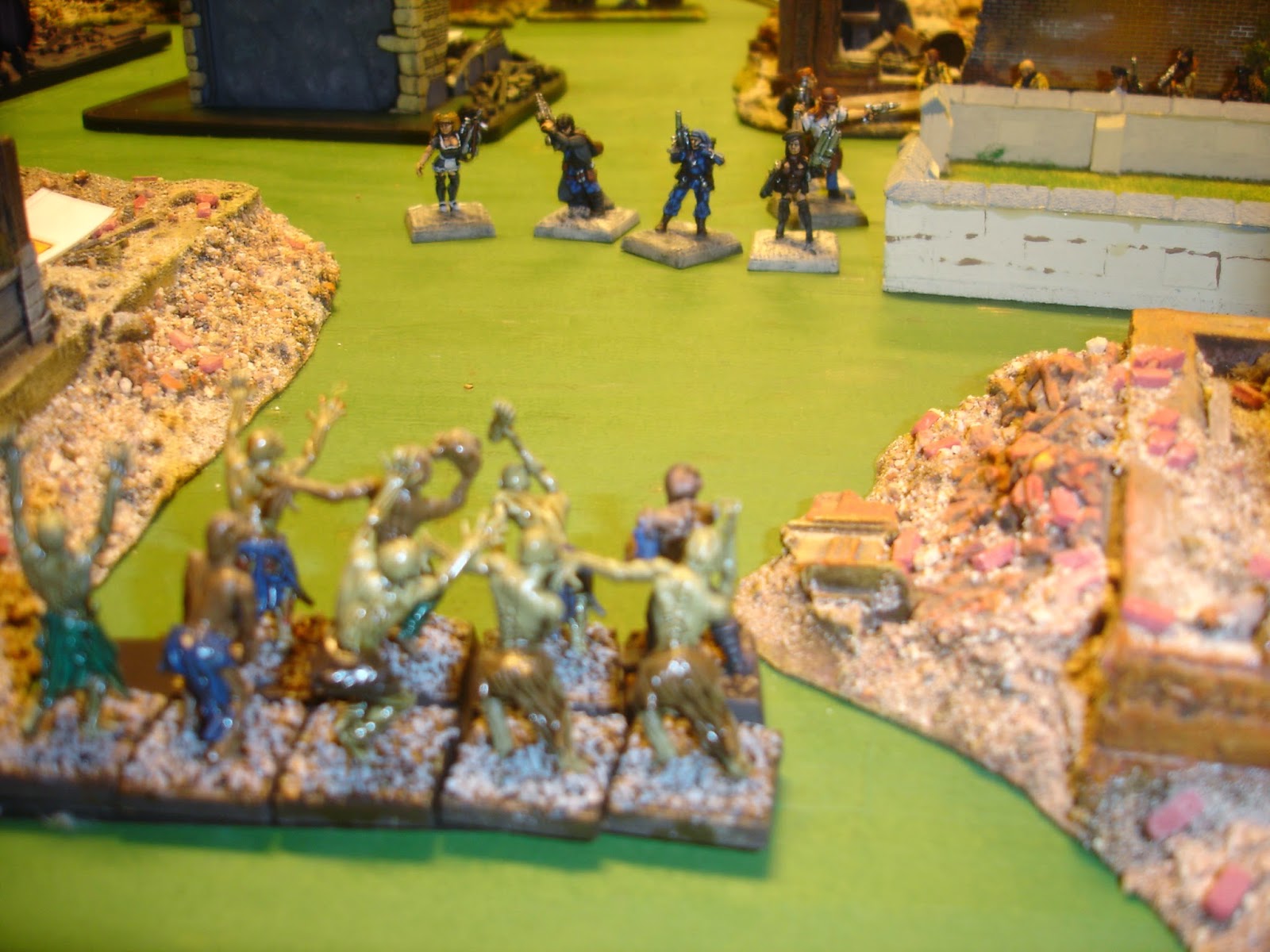 Another team of survivors is coming up on our rear, unfortunately they are being pursed by zombies as well. 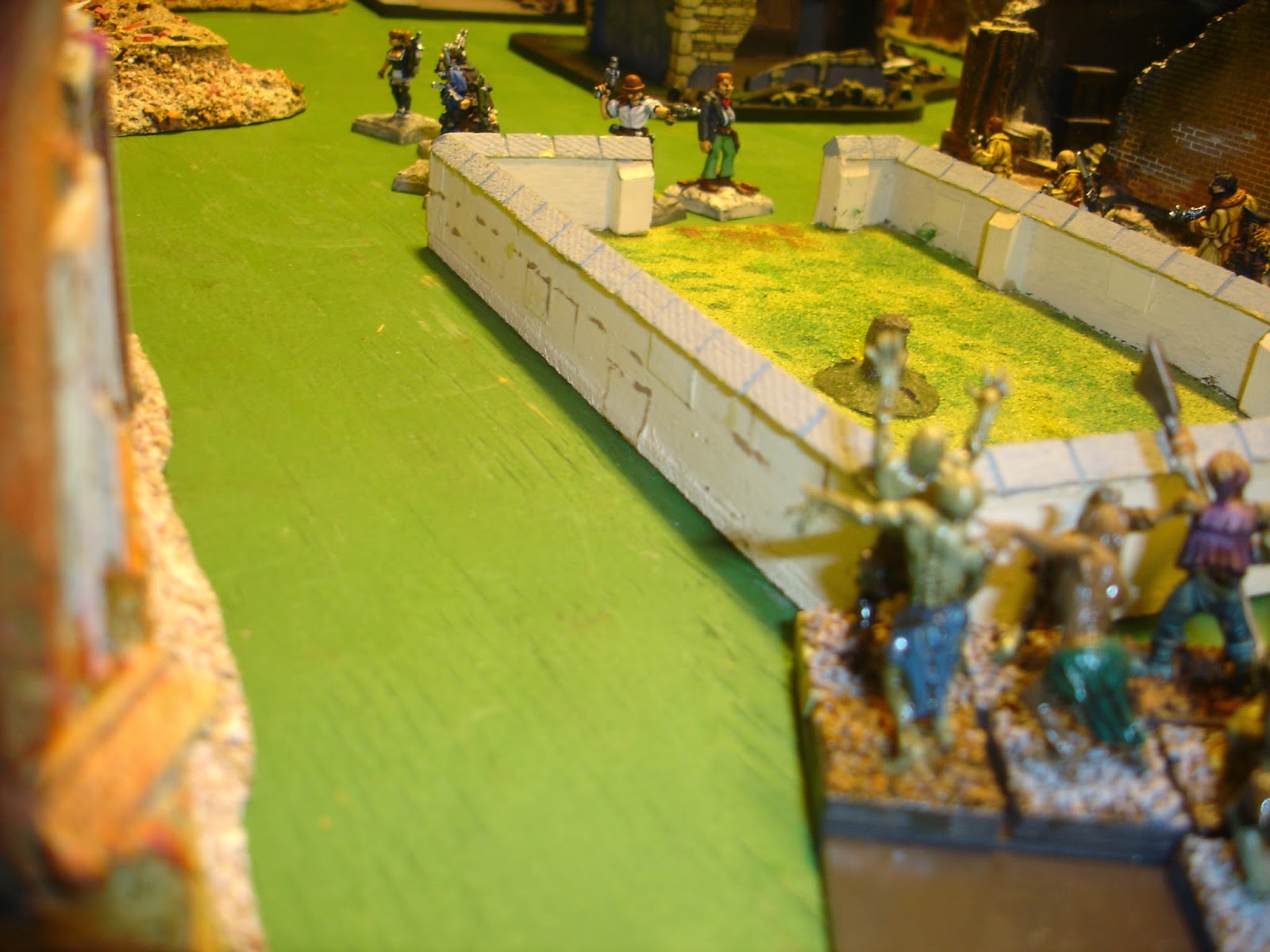 We coordinate fire between our teams, but to little effect, there are just too many of them. 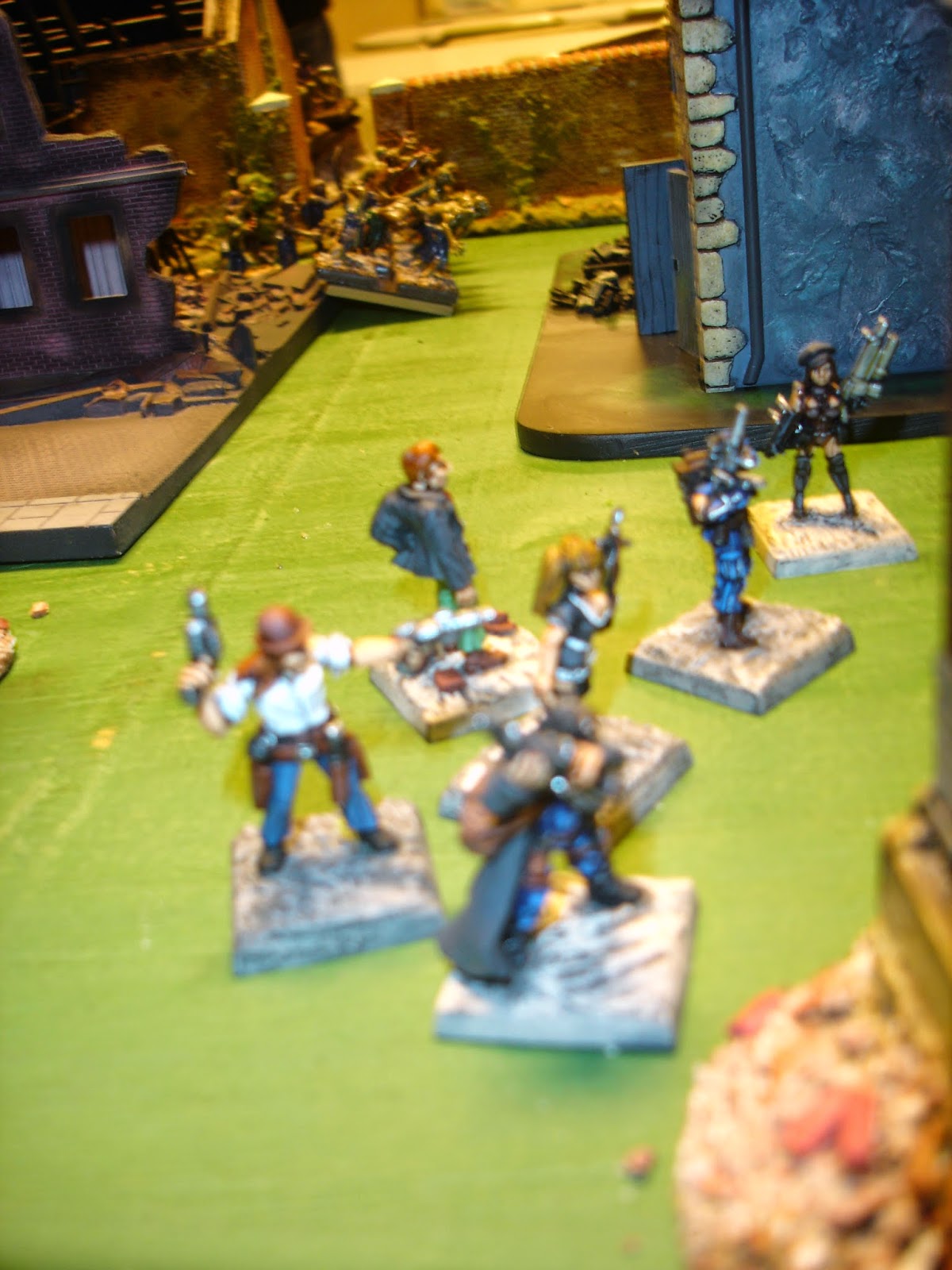 We put in some sustained fire and finally make a dent on the zombies.  A nearby gas explosion also has then heading off in other directions. 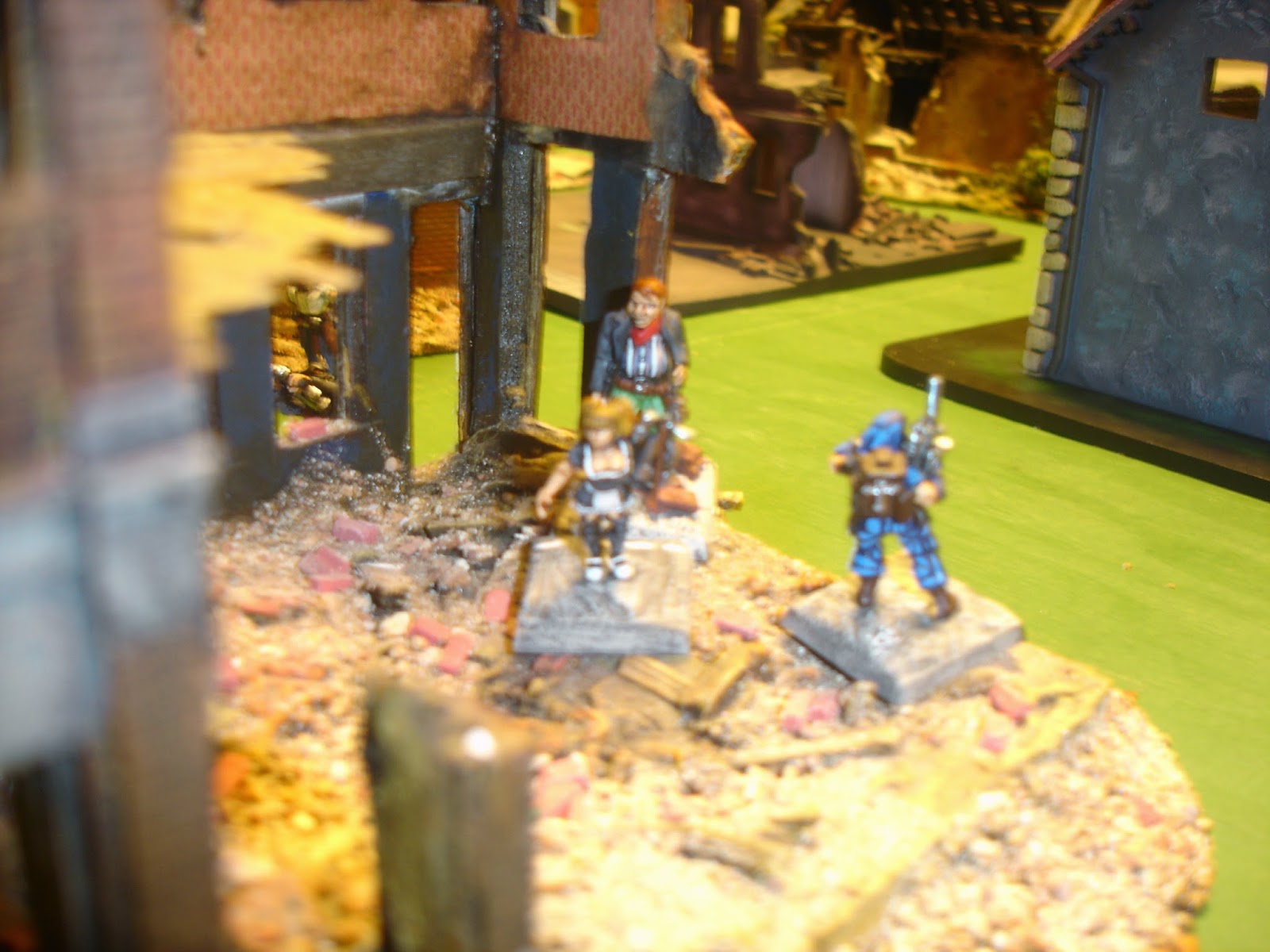 With time called we look to make camp in a nearby ruin.

Lots of fun, so much so I went off today to Tactics and bought myself my own zombie hunter.  Will I get her painted in time before the next contagion?

Email ThisBlogThis!Share to TwitterShare to FacebookShare to Pinterest
Labels: Fantasy, Wings of Glory