On Friday Mark W and I had a 800 point game of Field of Glory.  I ran Romans against his Carthaginians.  All figures and terrain are from Mark W's collection. 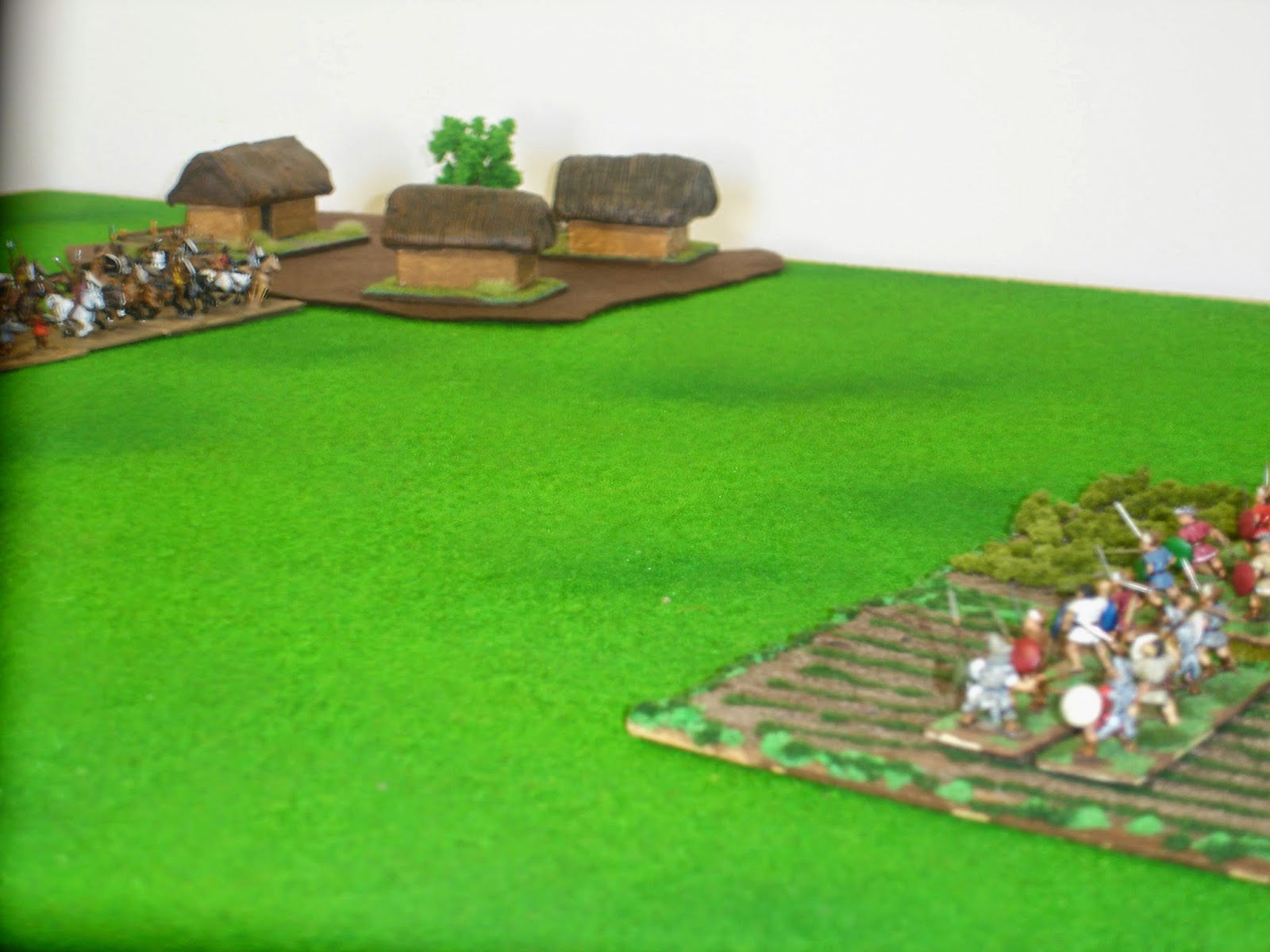 My extreme right where my light infantry are deciding they don't stand a chance of making it to the village and that the field ain't gonna save em from the Numidian light horse. 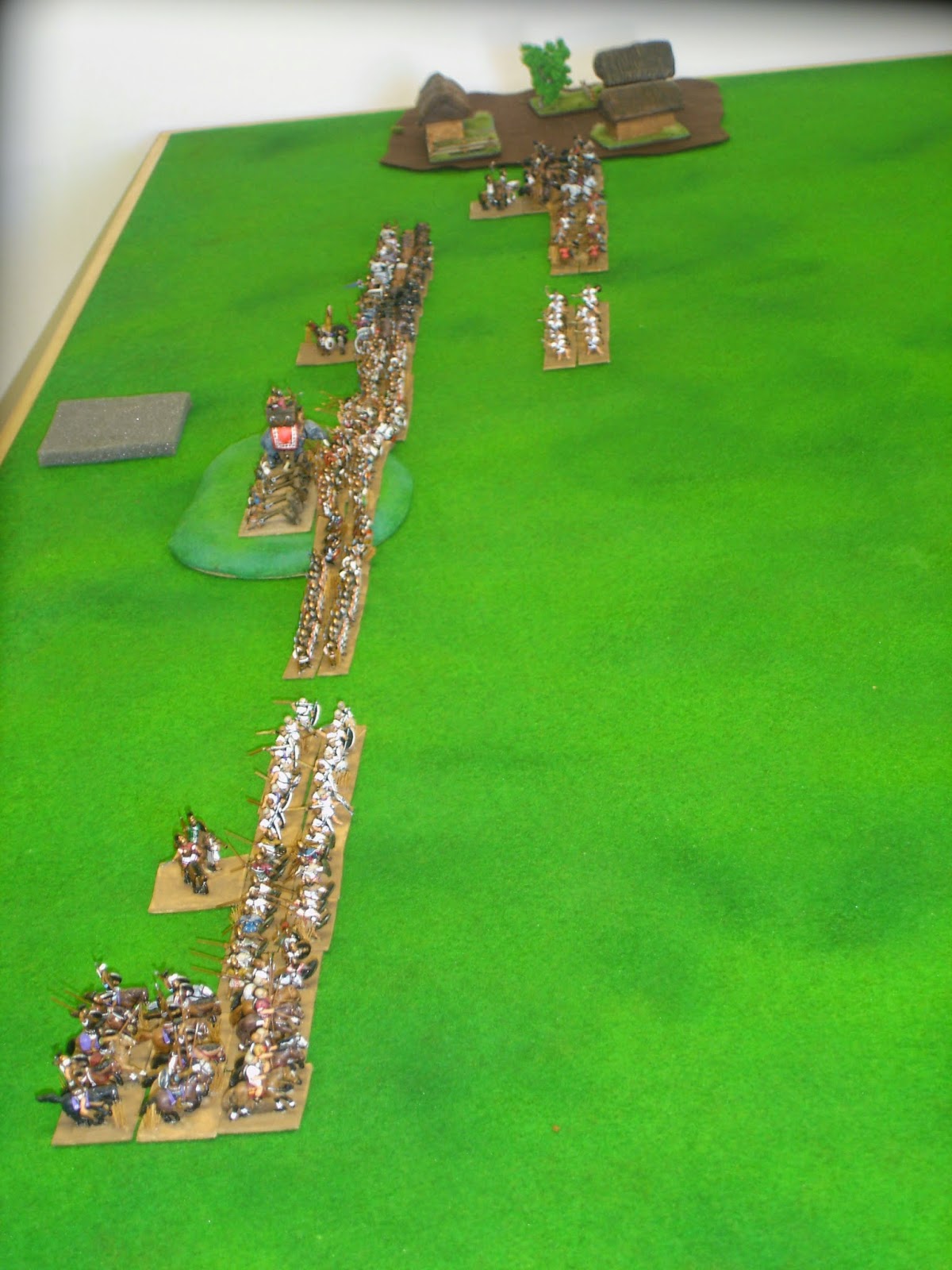 The Carthaginian Army - there was a lot of them.  Their camp was a bit grey. 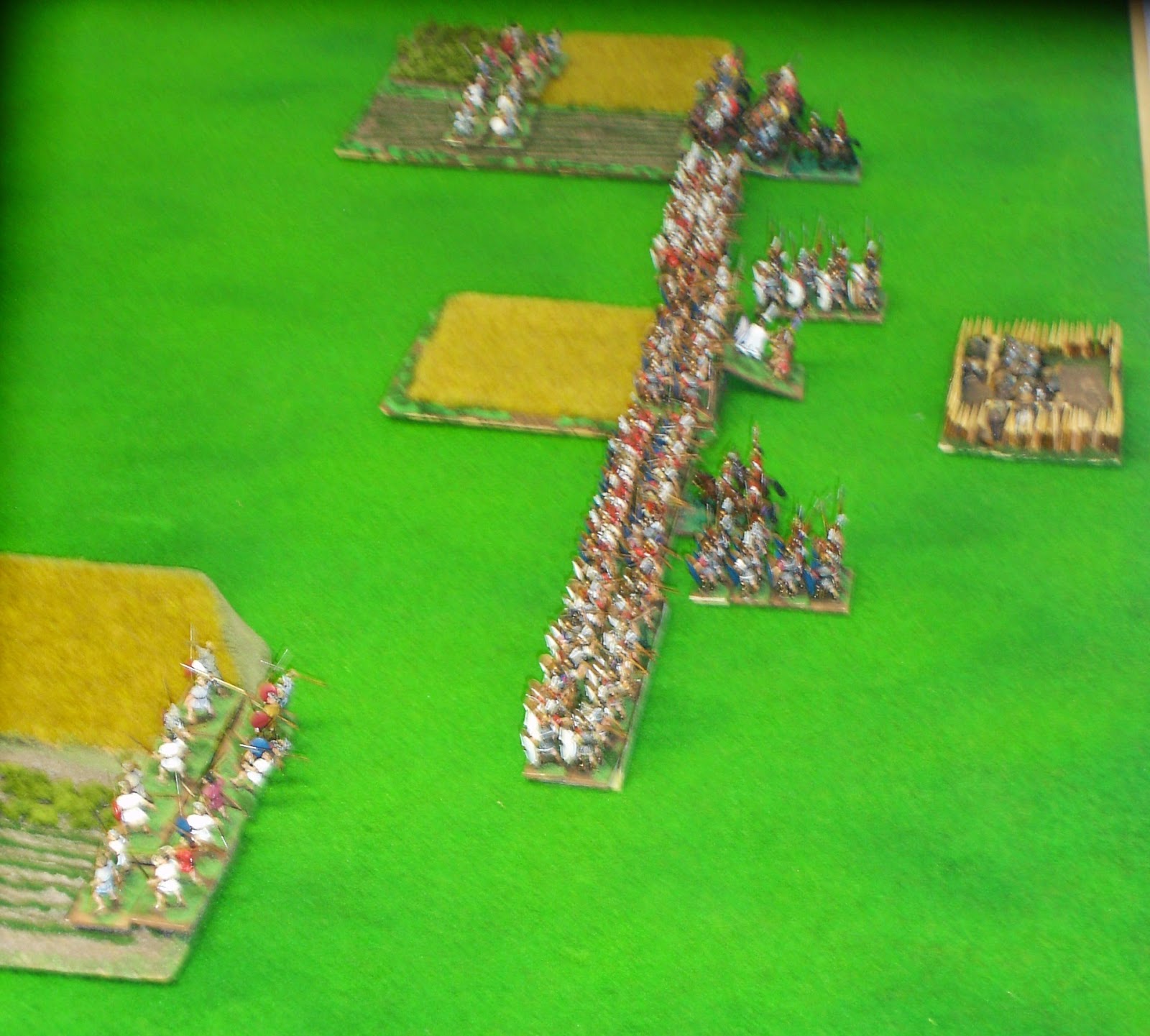 The Romans.  I had pushed my light troops forward to contest the fields on both wings.  The terrain was a bit of a handicap for me, but I was hoping that the number of small drilled units of legionnaires I had deployed would provide the necessary maneuverability.  The Triarii were in reserve and I was about to force march the only cavalry I had from my right flank to my left (seemed like a good idea at the time.. 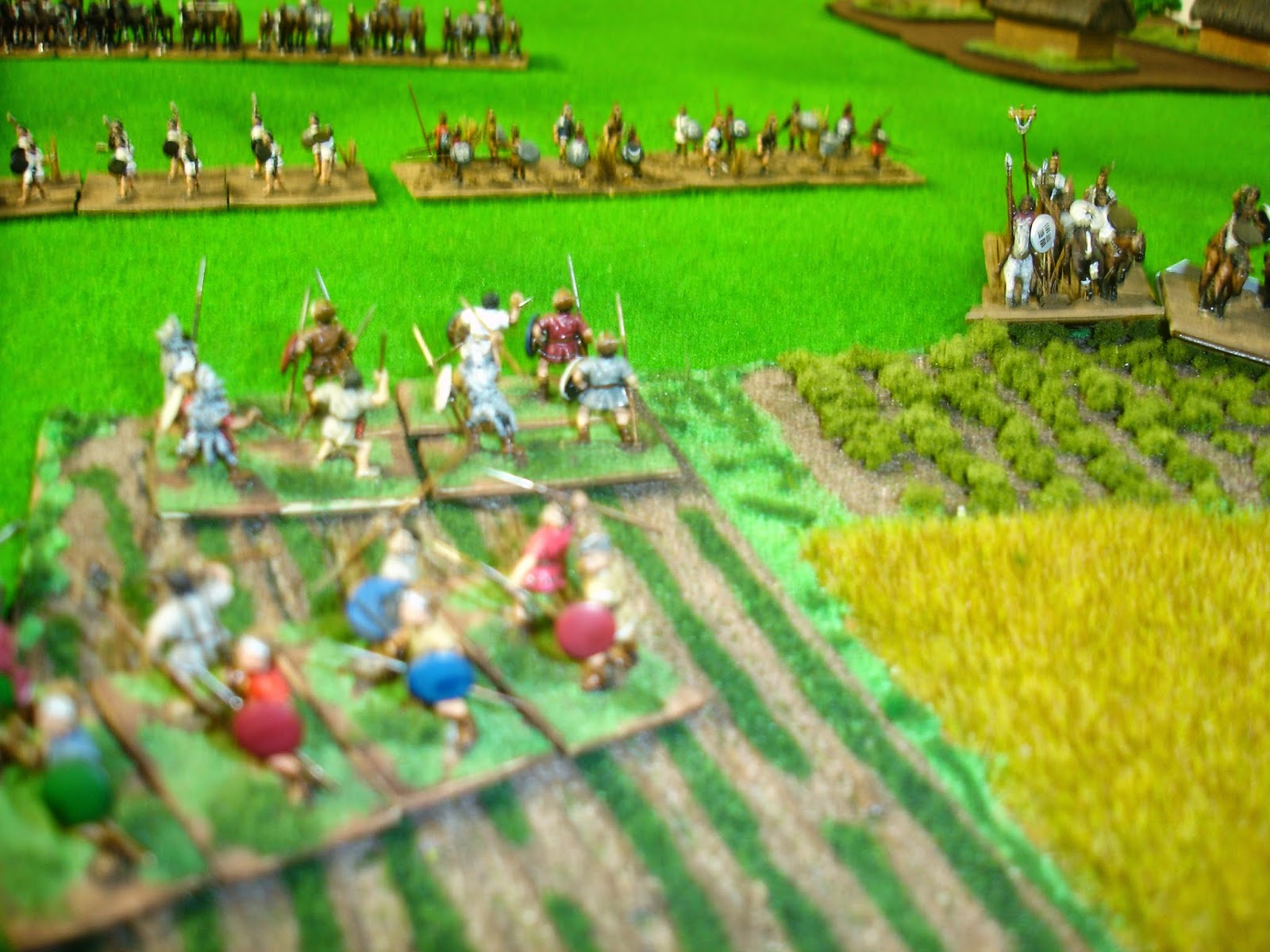 The right flank Velites start to pull back. 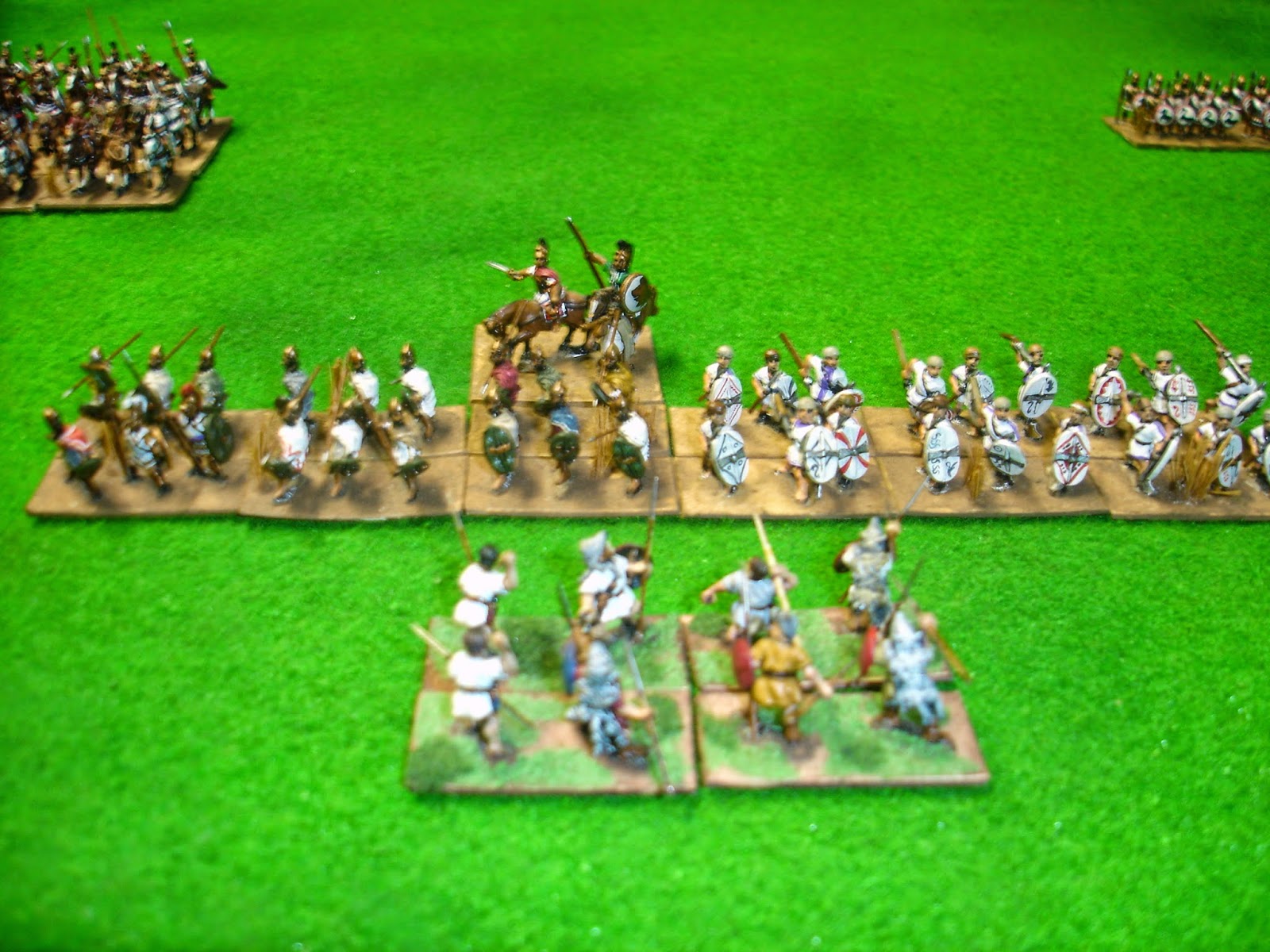 On the left one unit of Velites tries to delay the Carthaginian medium foot. 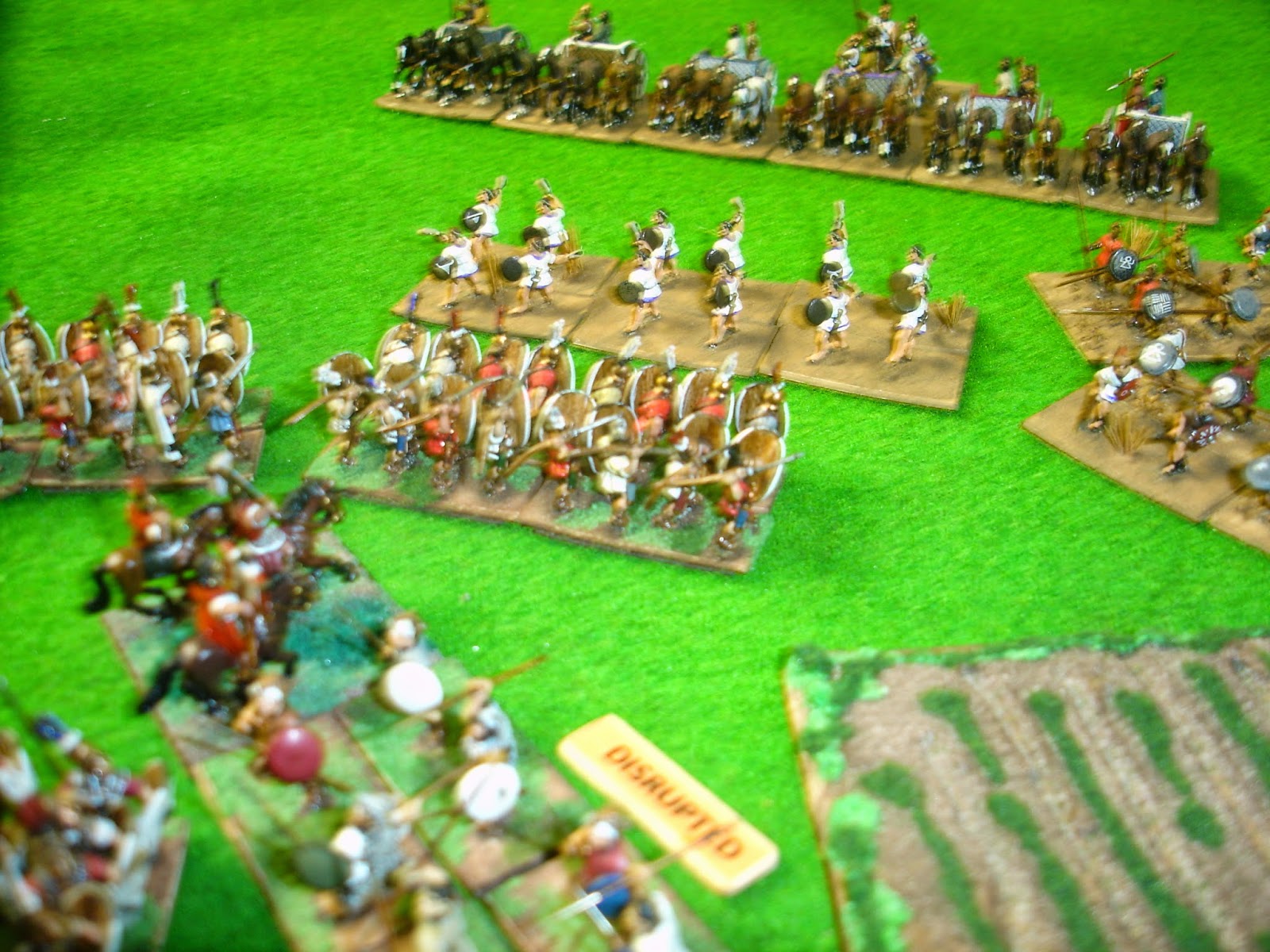 One the right I kind of got the Velites out of trouble.  Legionnaires to the rescue. 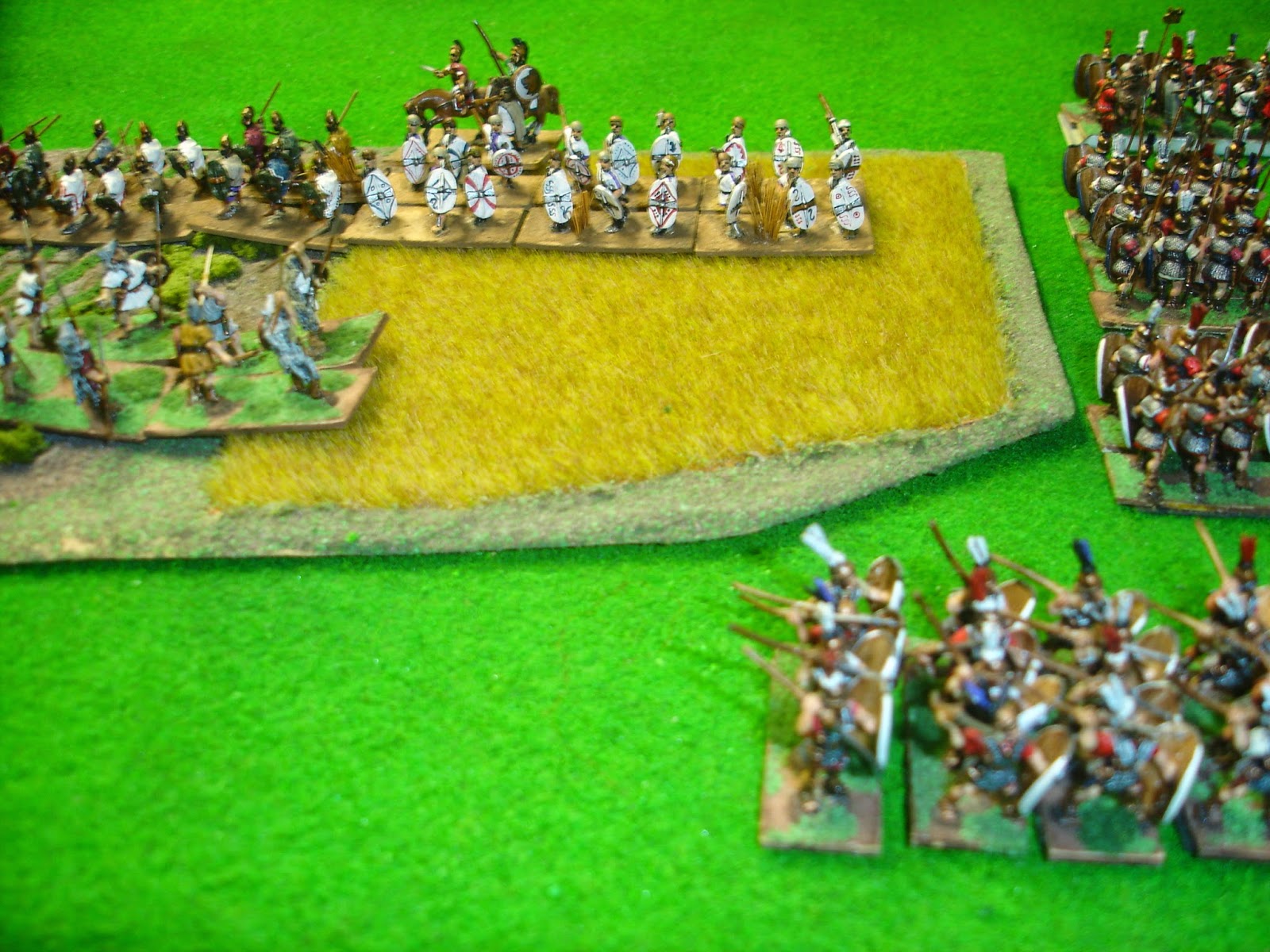 On the left it got interesting as my troops prepared a trap. 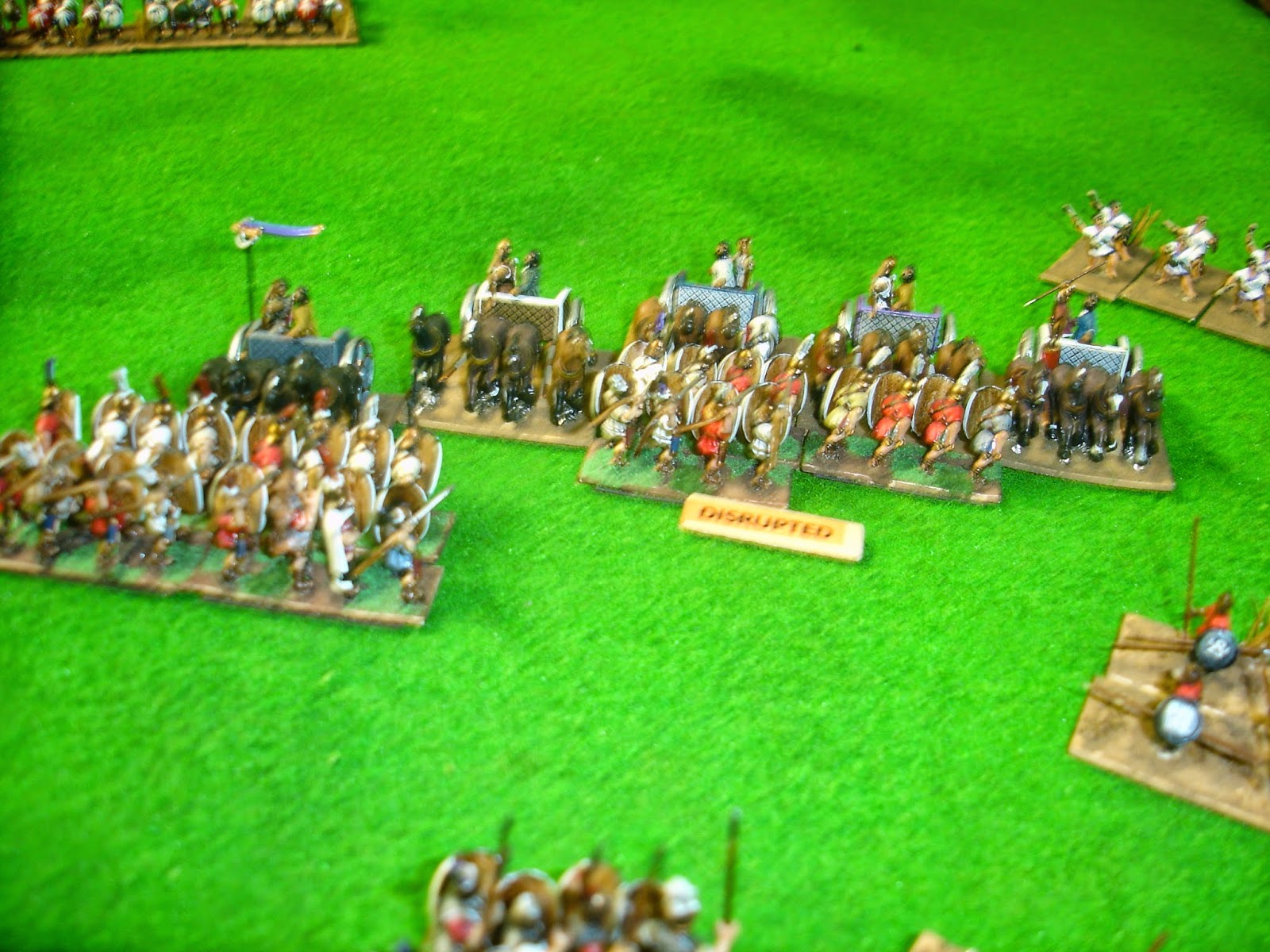 But on the right those Carthaginian heavy chariot worked havoc on my troops.  It didn't help that my guys went disrupted when they were fired at. 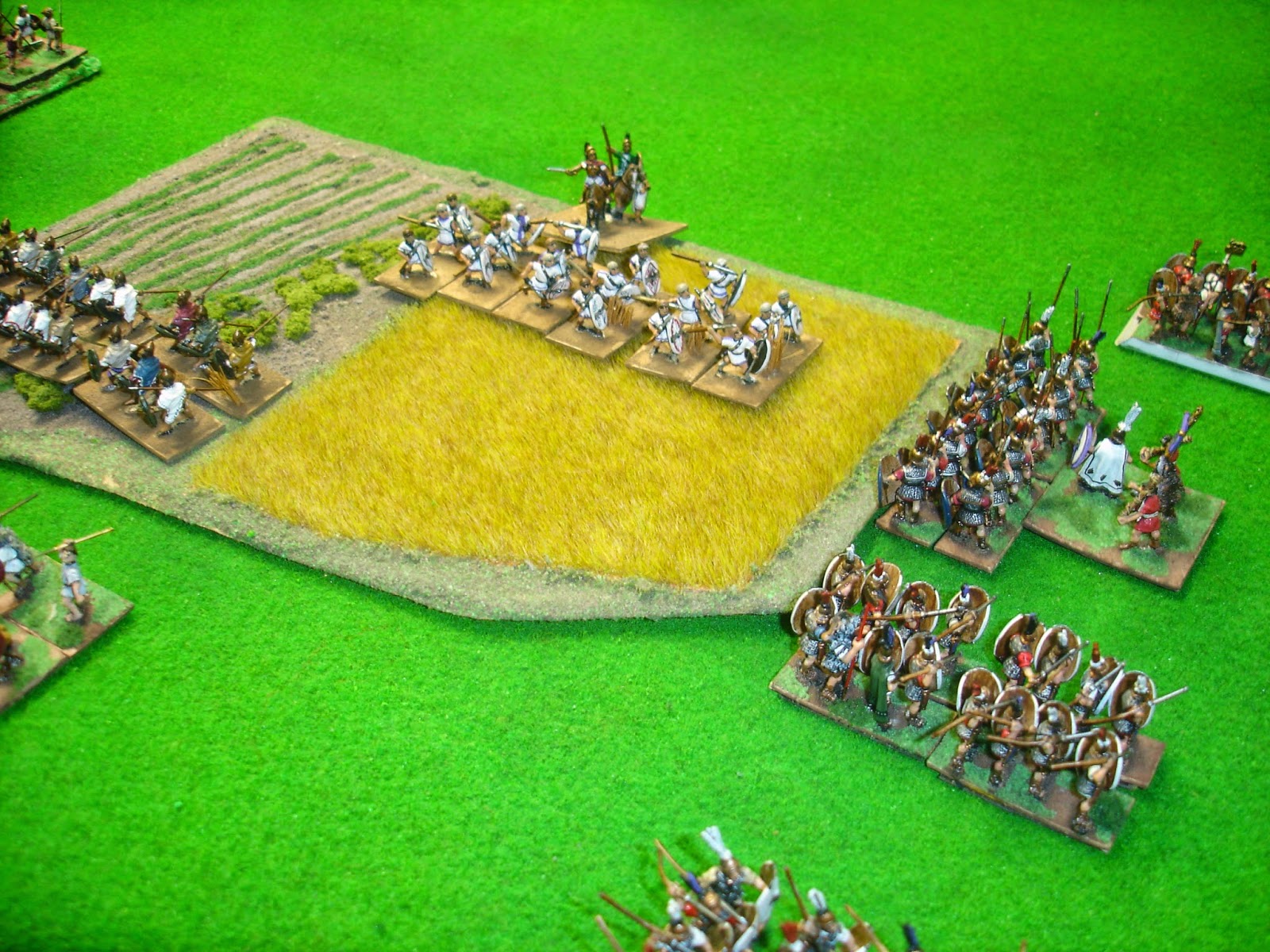 The Spanish turn just at the last moment, but my Tiarii decide to chance it anyway (they have friends). 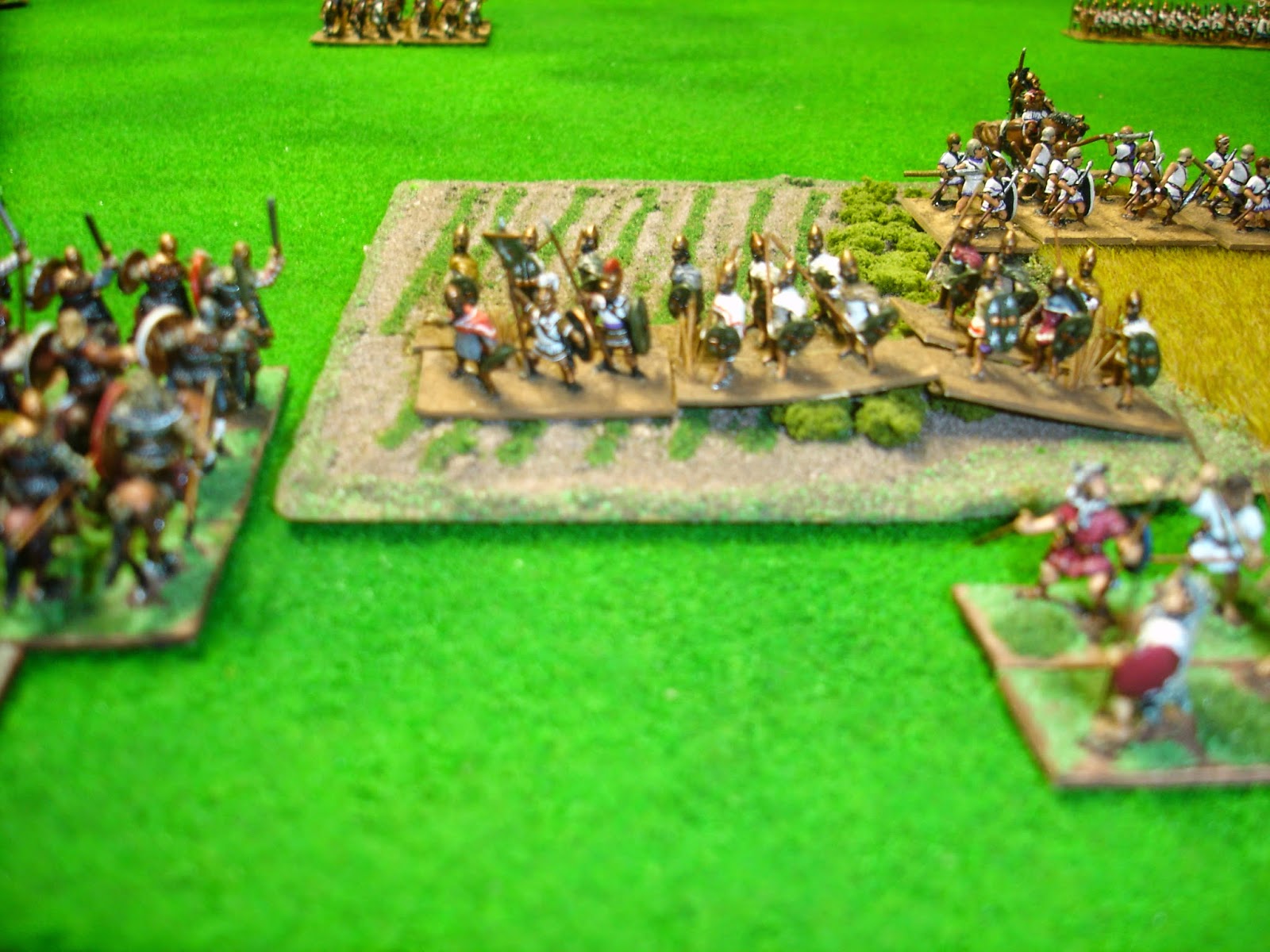 My cavalry arrive on the left and go out to face the Carthaginian horse.  The Spaniards fight on. 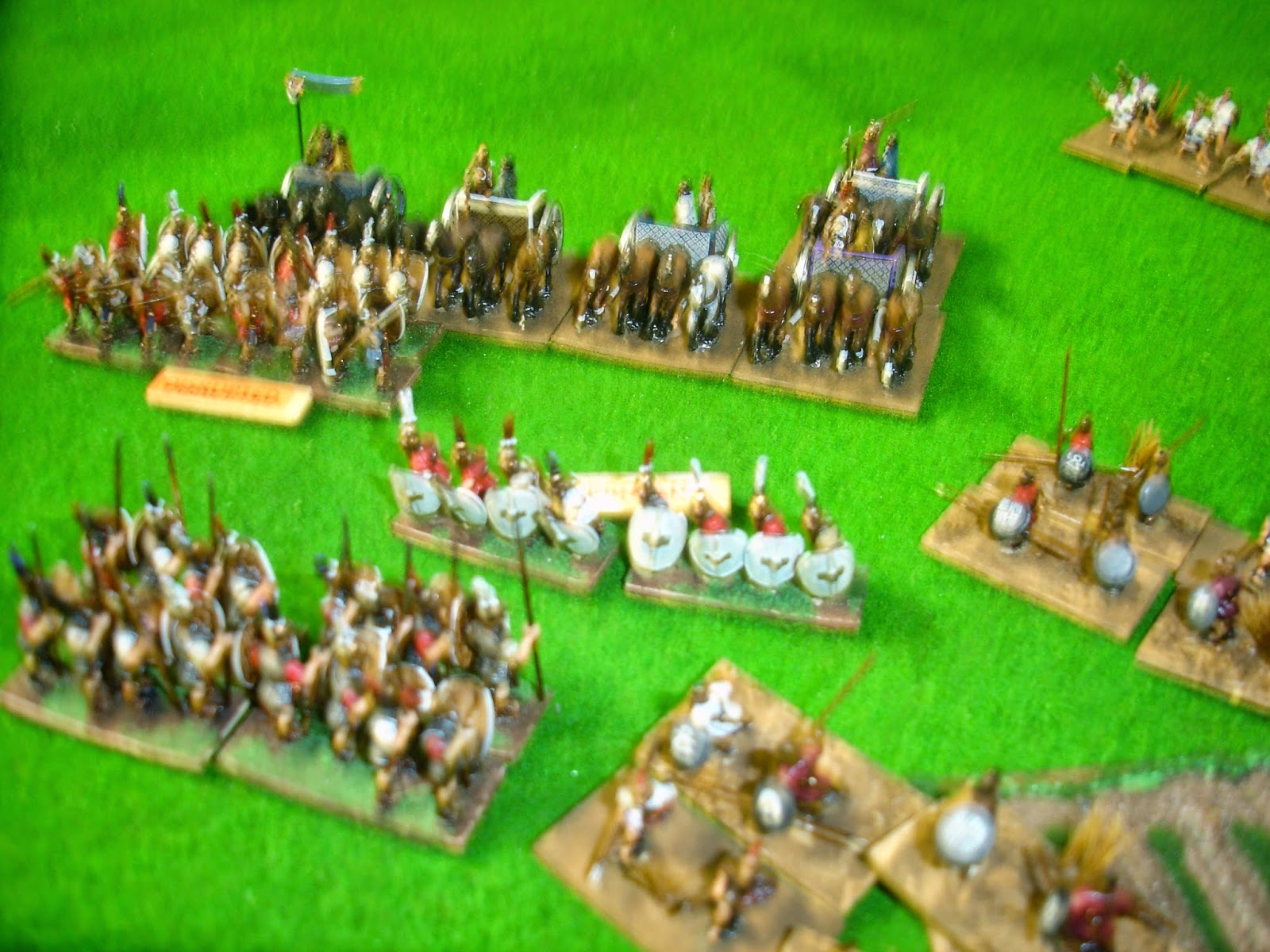 The Carthaginian heavy chariots continue their mayhem.  I am running out of troops to confront the Carthaginian light troops as well.  Where are my cavalry? 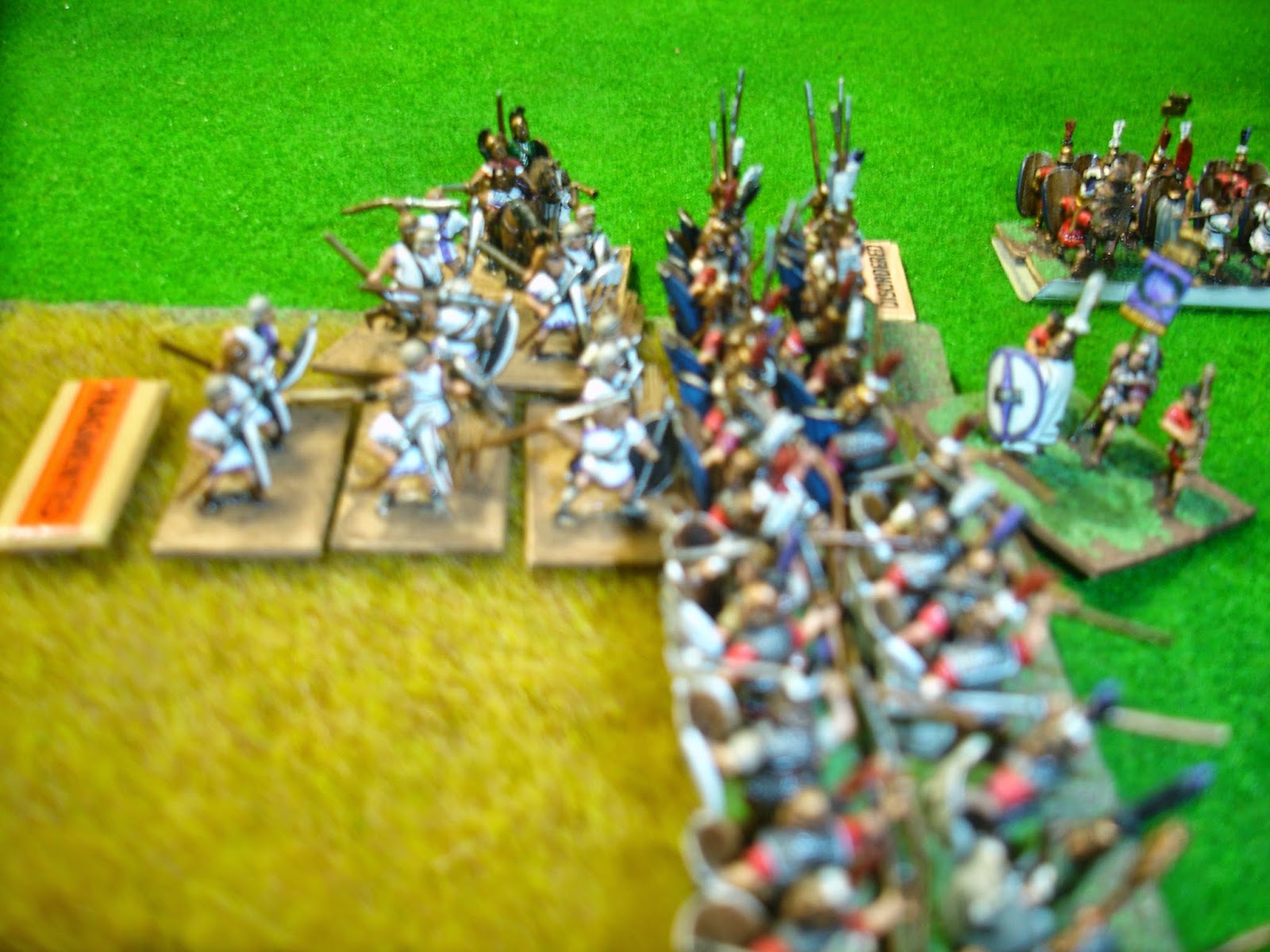 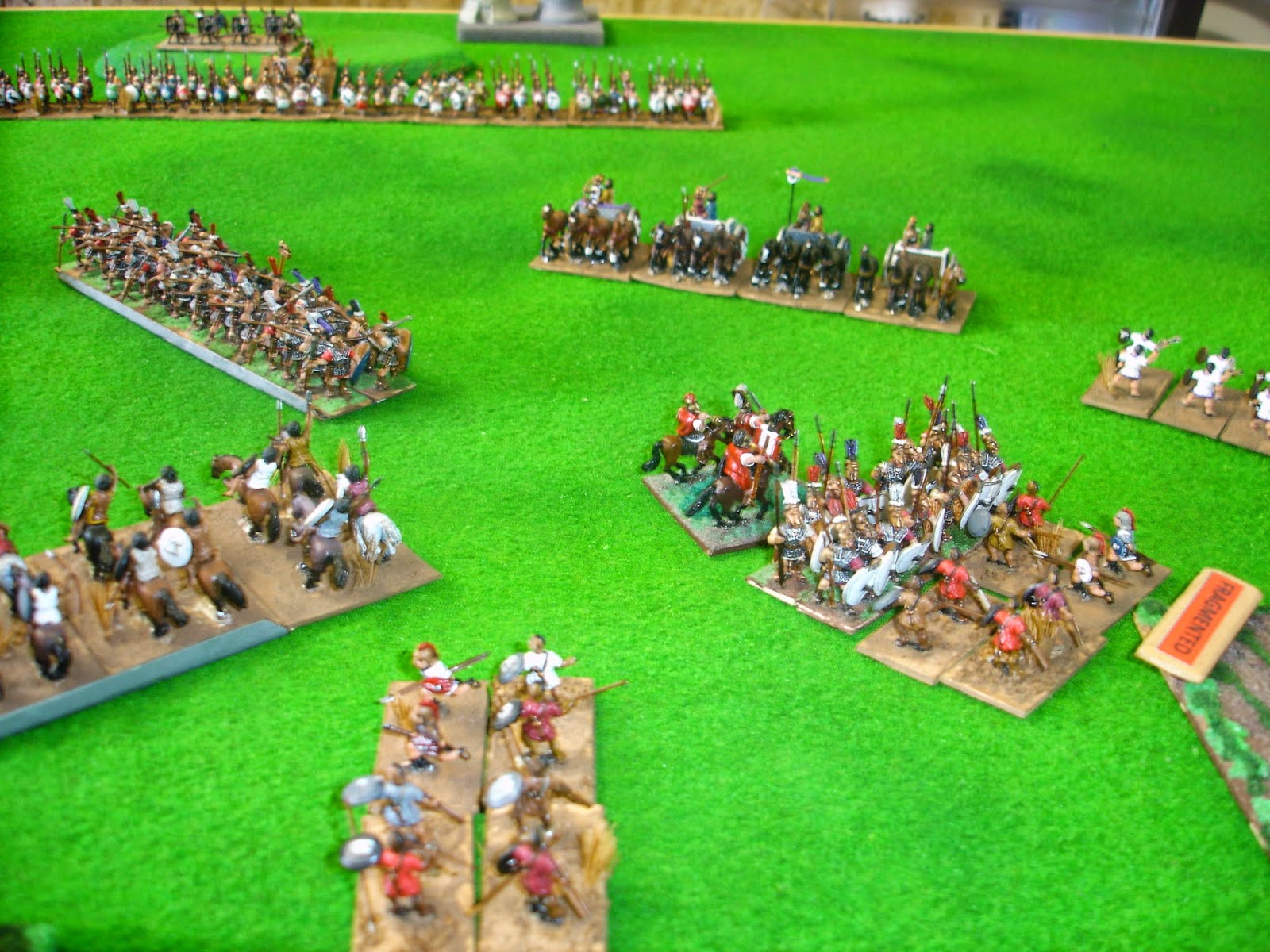 My left is being surrounded.  We have worn down the chariots, even killed their general, but they are still ready to charge again (into the back of my Tiarii who are pinned by some annoying skirmishers). 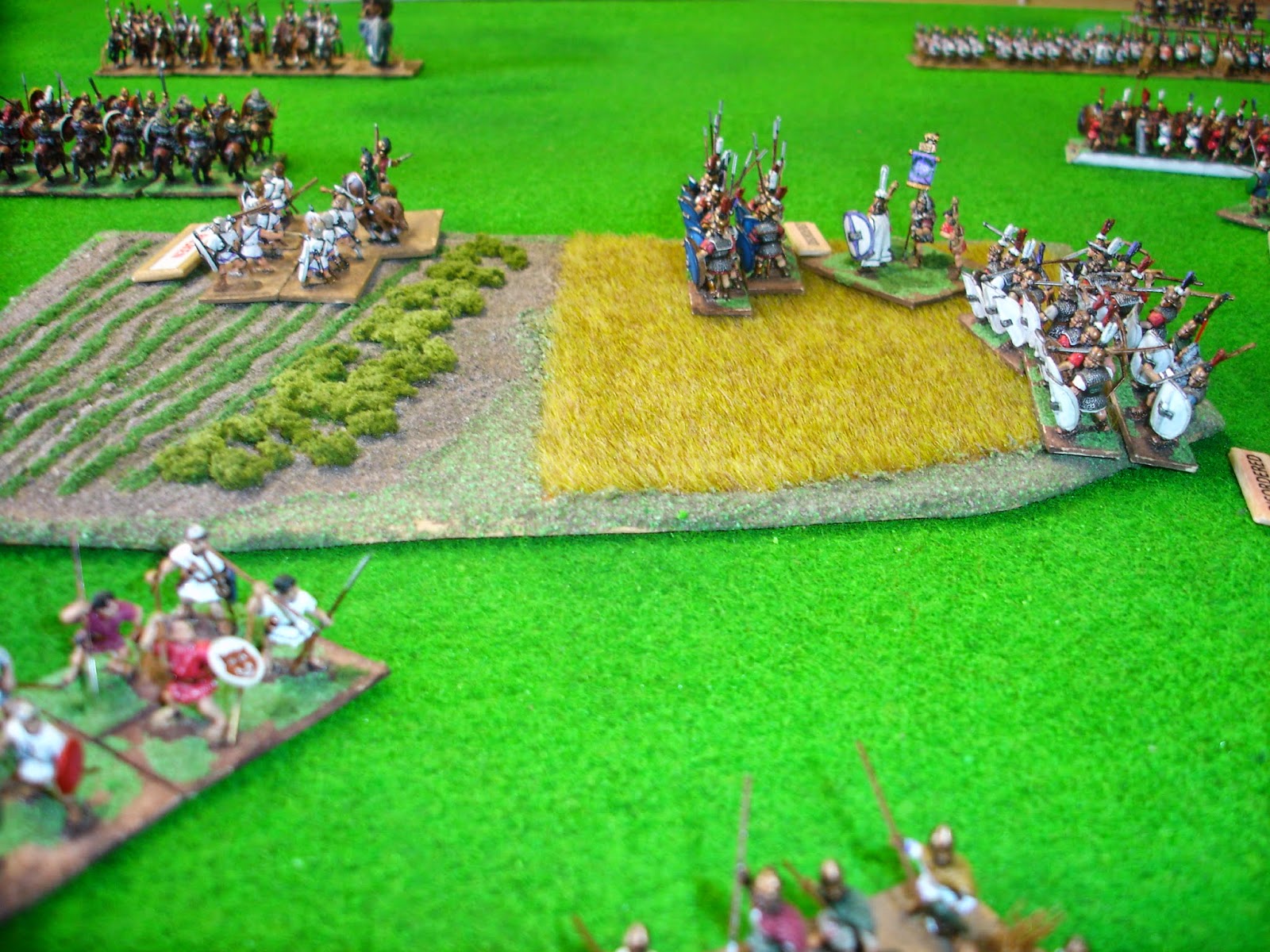 Finally the Spanish are destroyed, but I have lost valuable time and now my guys are stuck in the field. 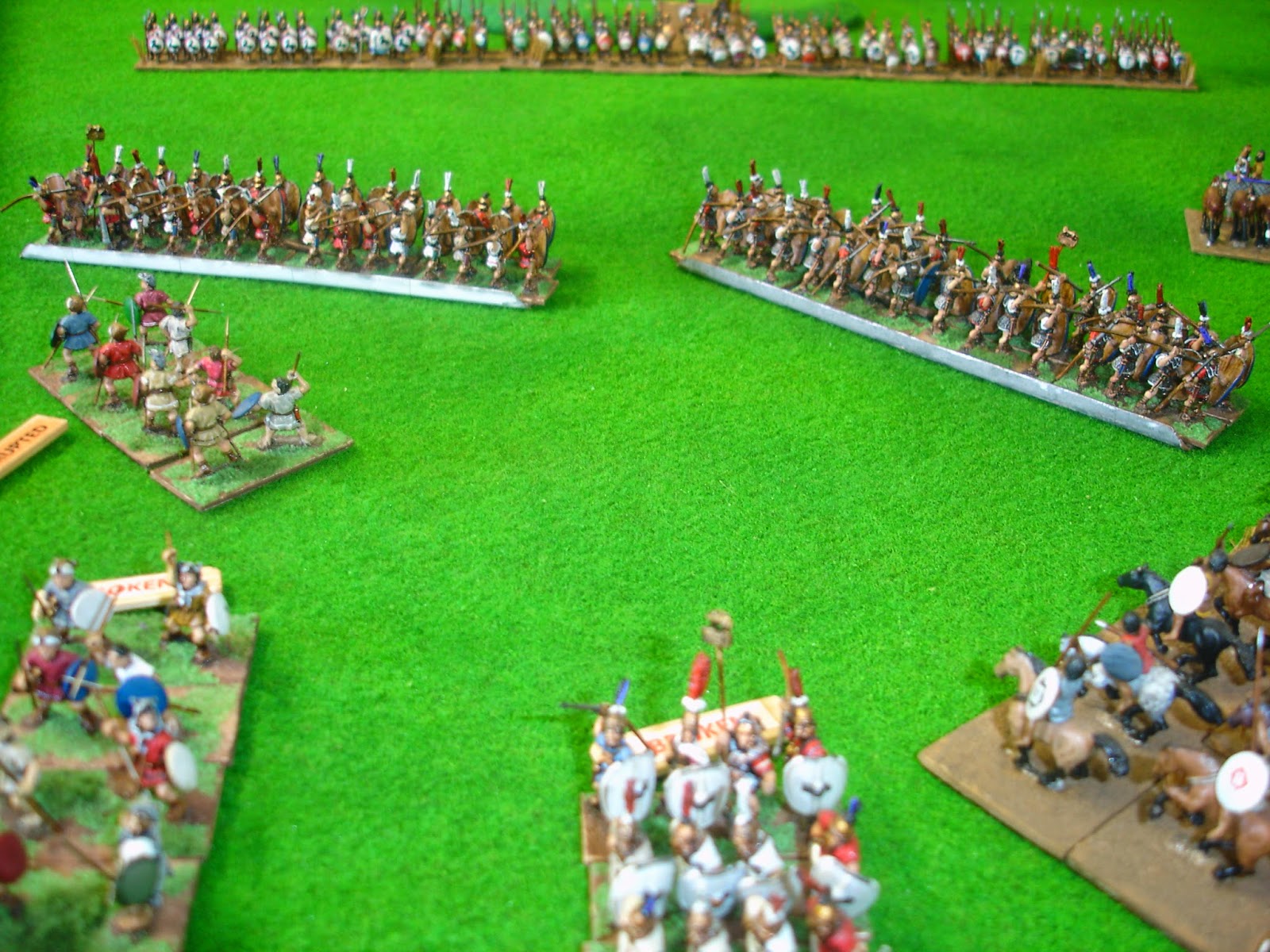 A broken unit of legionnaires heads for the rear along with some disgruntled Velites.  In the distance the uncommitted Carthaginian foot wonder if there will be any Romans that make their way through. 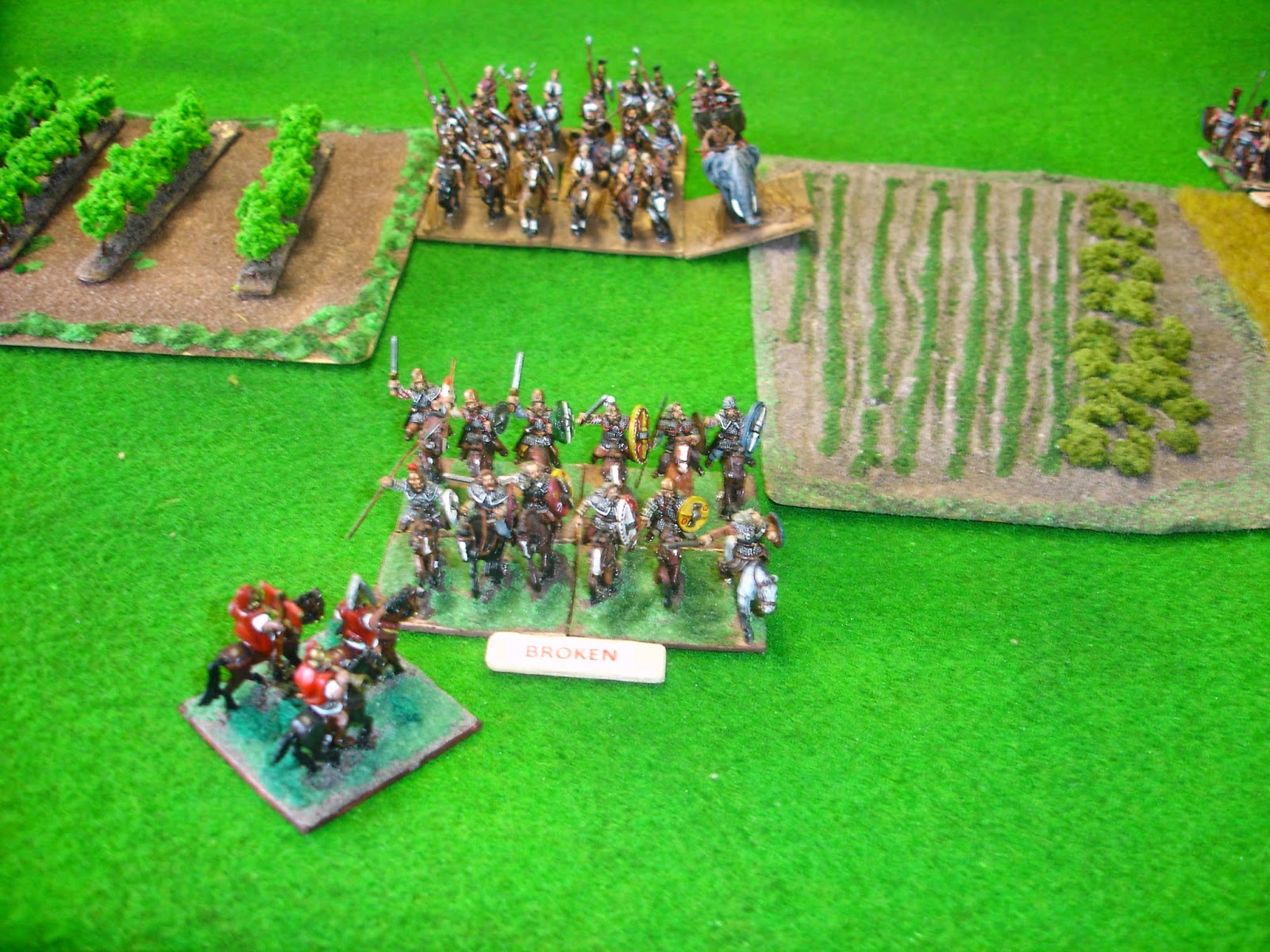 Well, after their long march my cavalry collapsed in the first encounter with the Carthaginian cavalry.
What a farce! 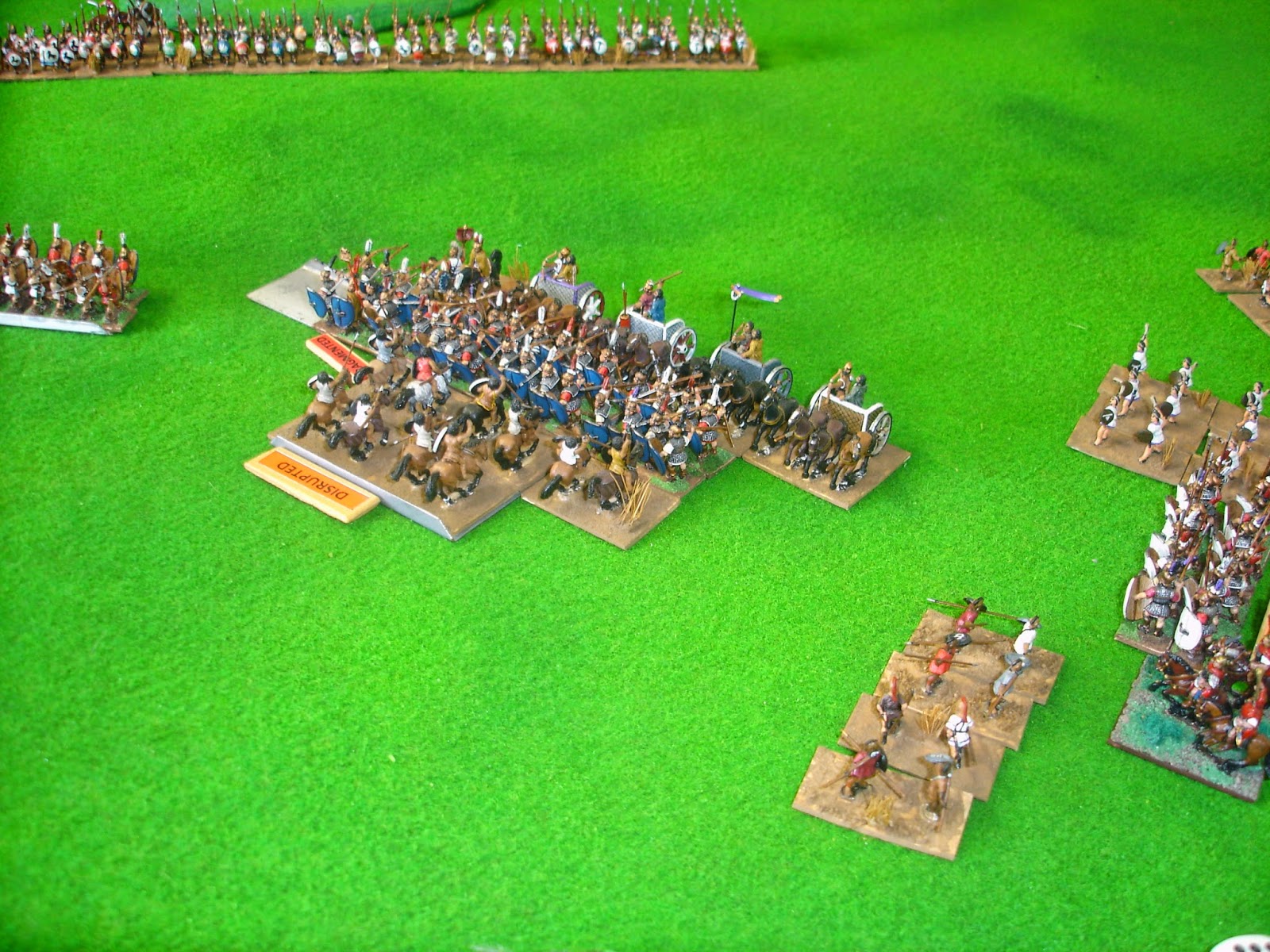 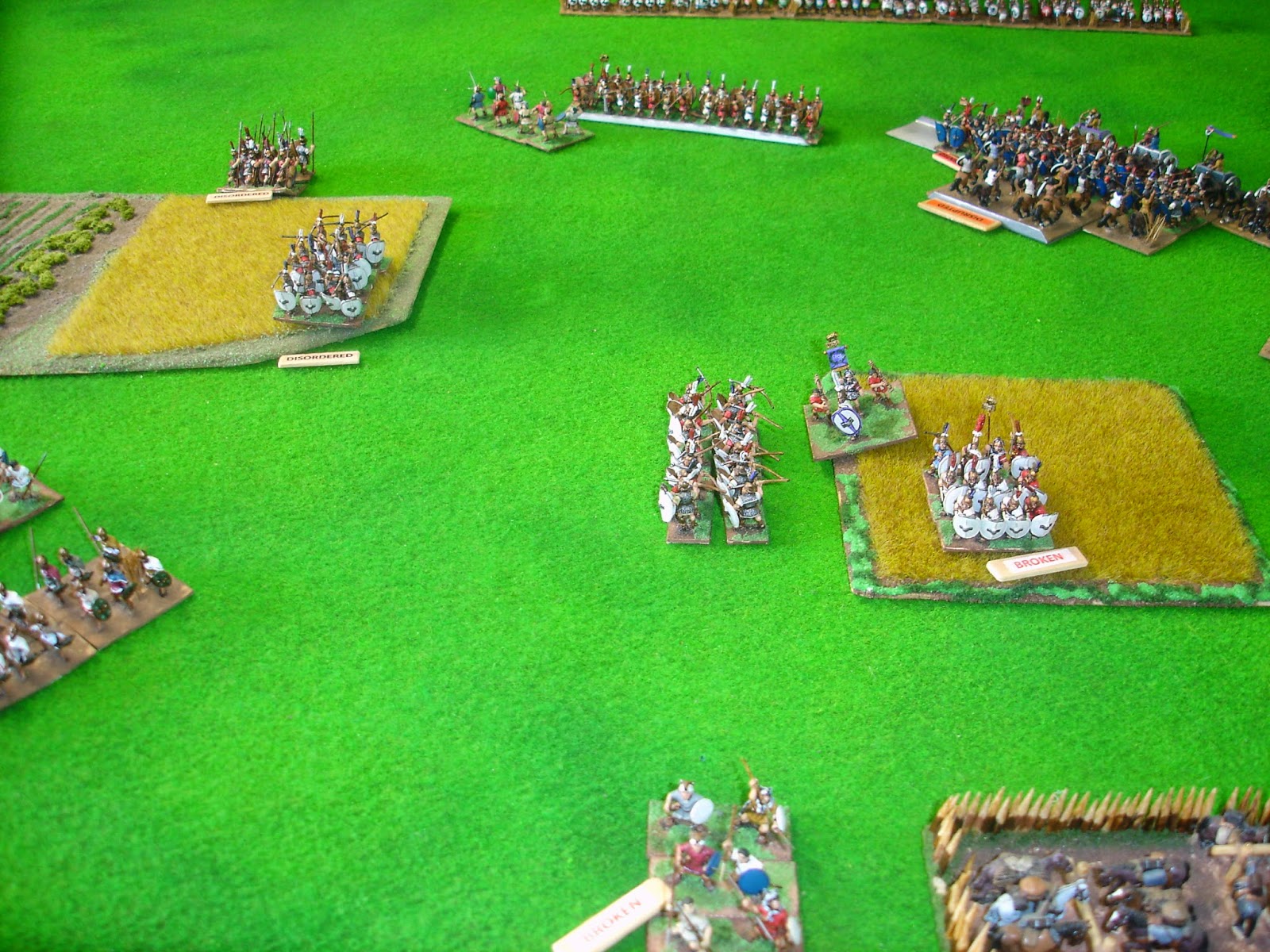 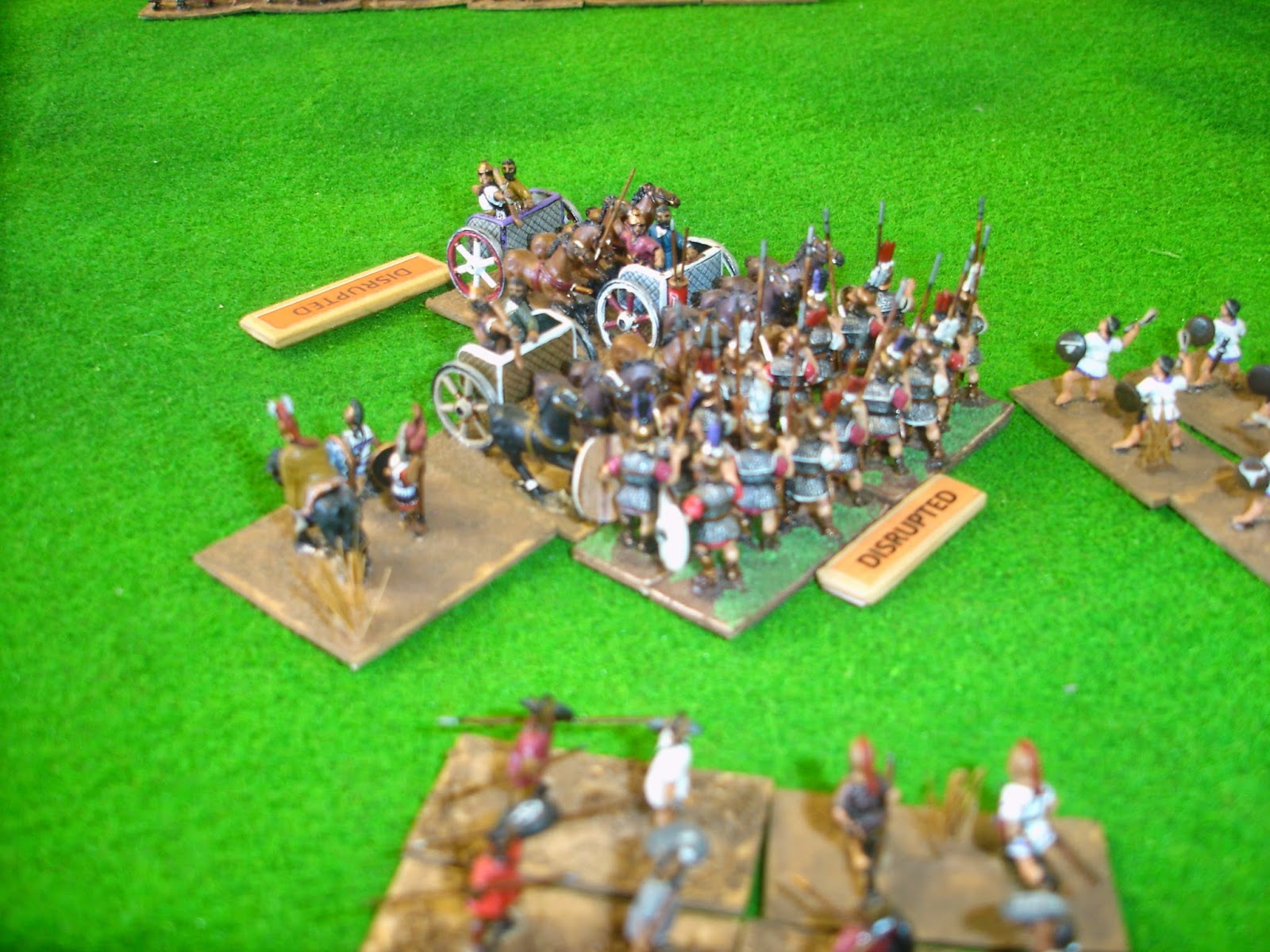 Another Roman sandwich in the making. 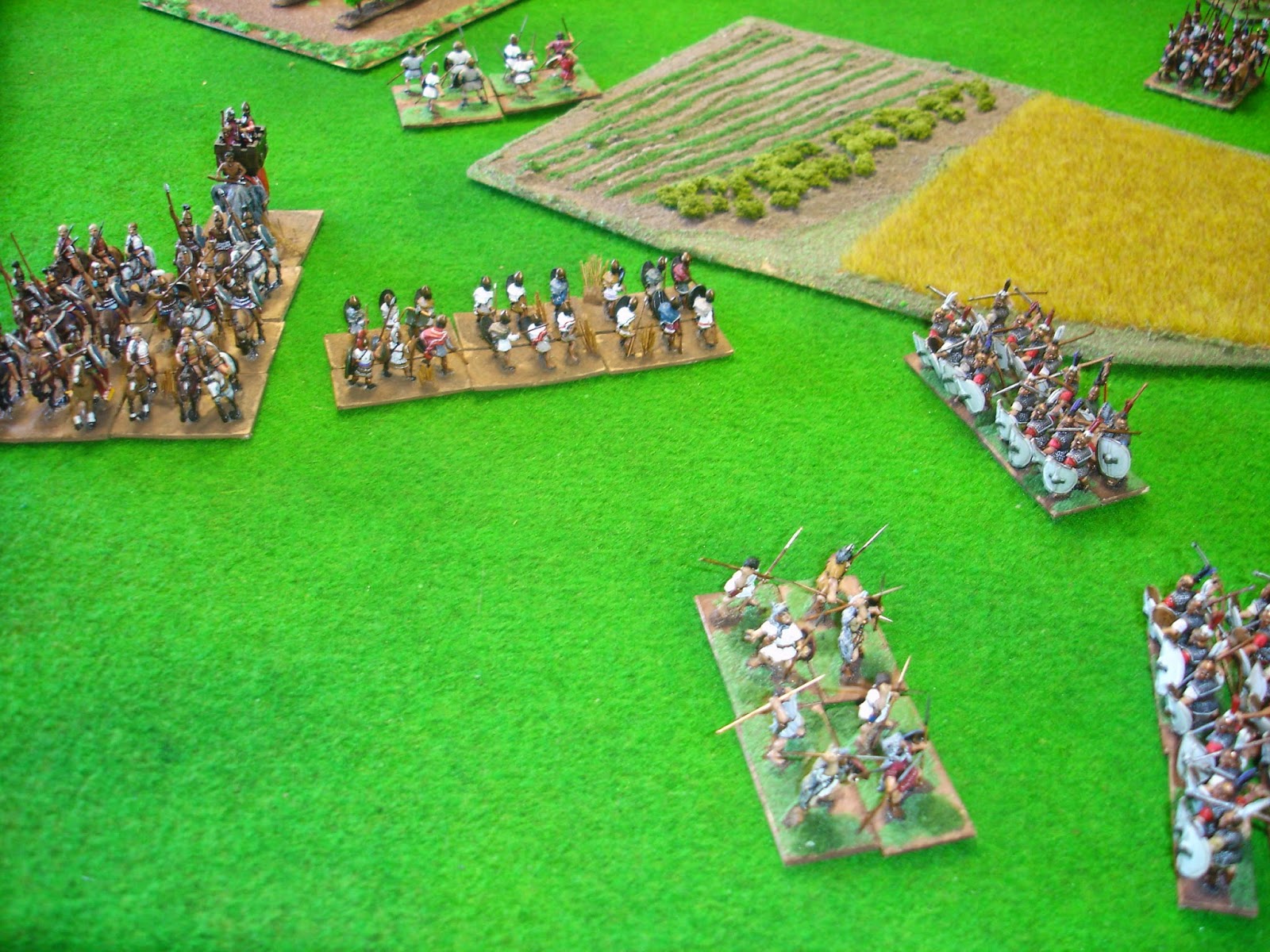 The Carthaginian Gaulish foot escape from the Romans on the left flank. 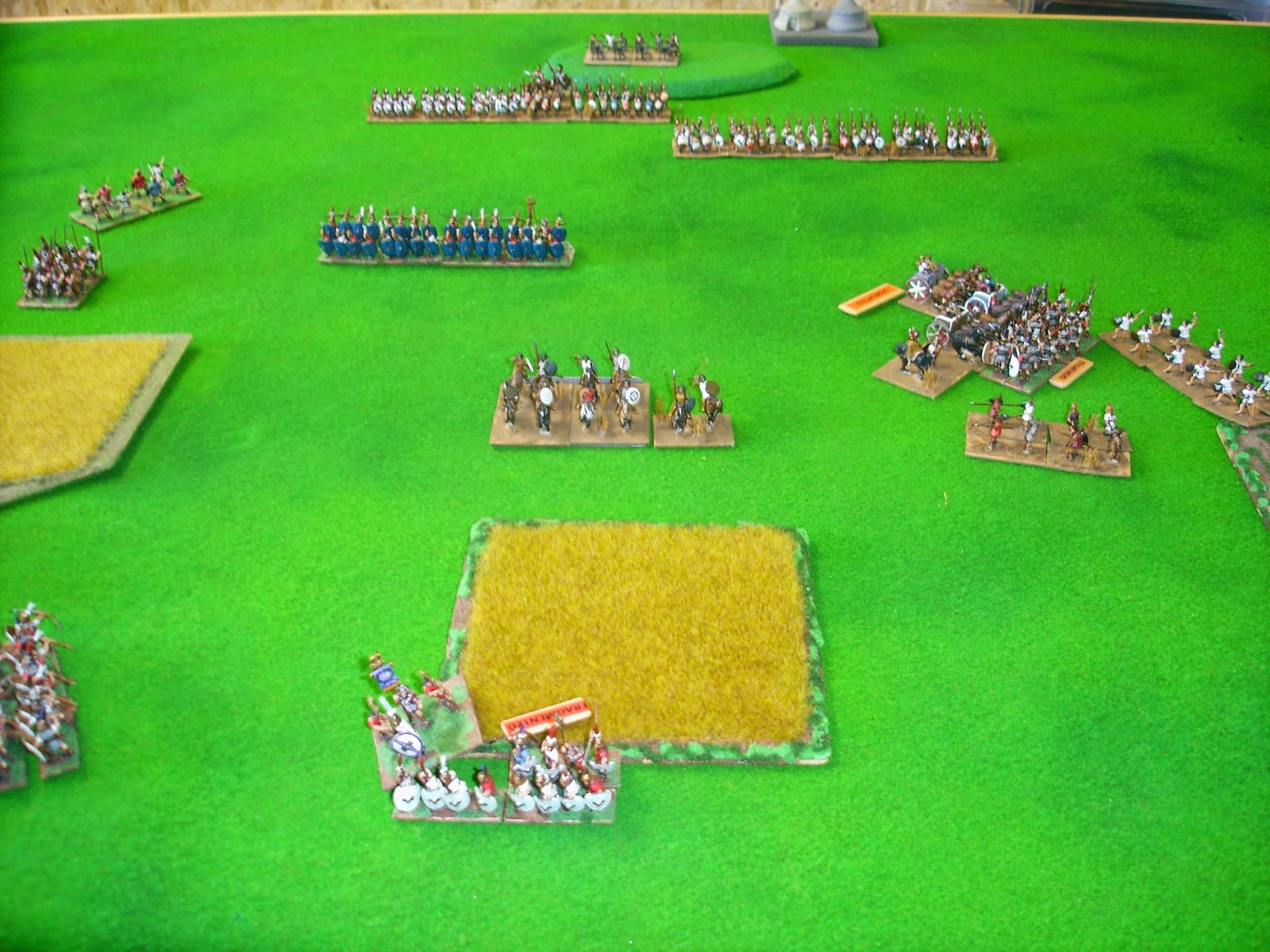 The Romans start to withdraw.  A unit of legionnaires is rallied. 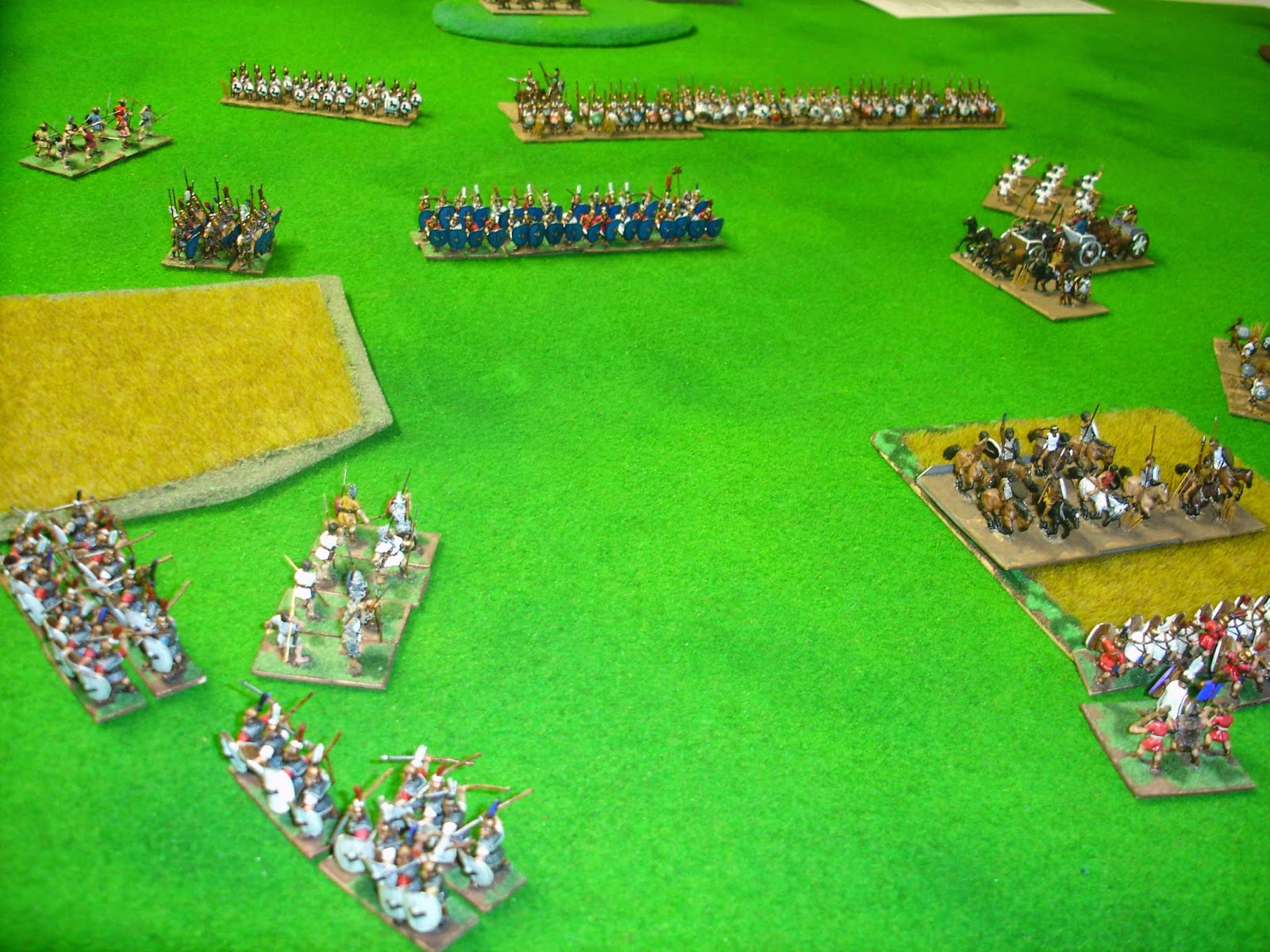 On the left my troops repel a charge by the Carthaginian cavalry, but not without losses.  Those damn chariots are still in existence. 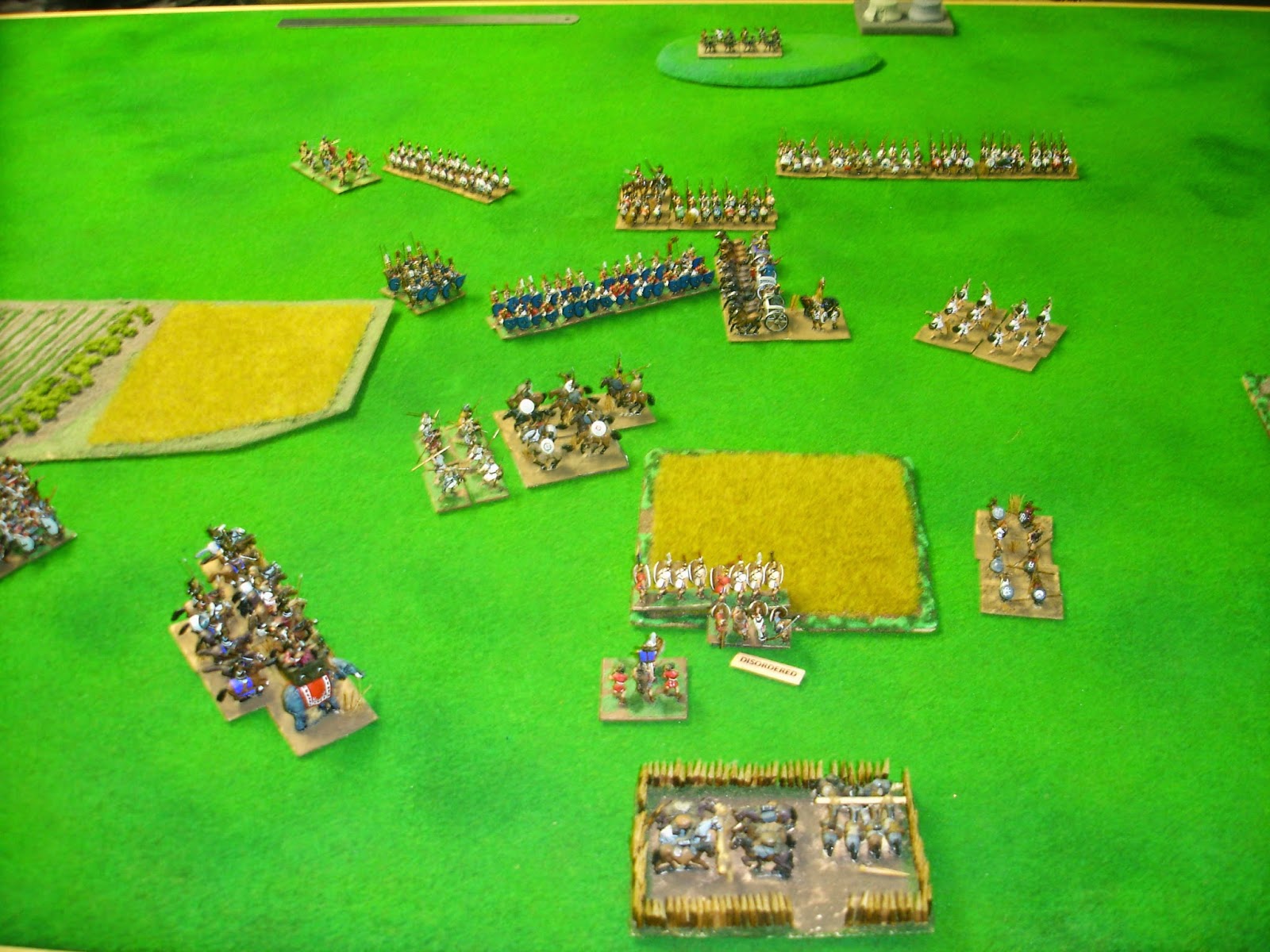 The end!  The Carthaginian cavalry have triumphed and their chariots are about to do for any body of Romans as their foot finally arrives.

An exciting fun game with lots of action and only a couple of times when we had to refer to the rule book.