As things ticked over to November/December 1942 it is fairly quiet on the Eastern Front. 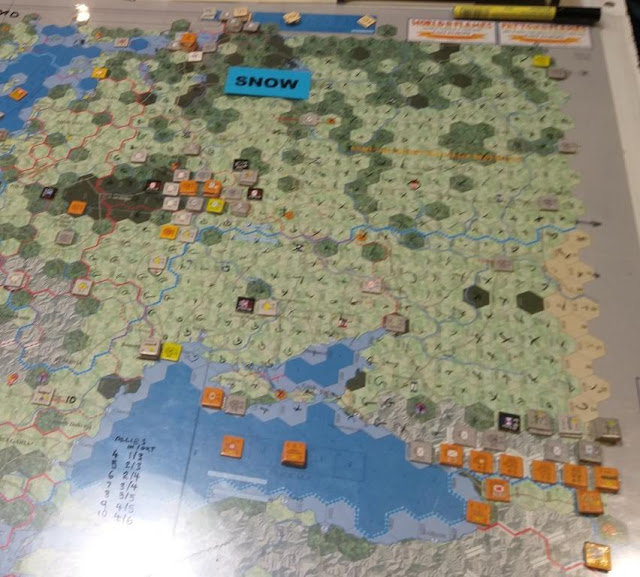 Bad weather - good.
No partisans - disappointing.
Although the pockets are tieing down enemy troops who otherwise would be doing partisan duty.
The USSR seem to be doing more naval than usual... 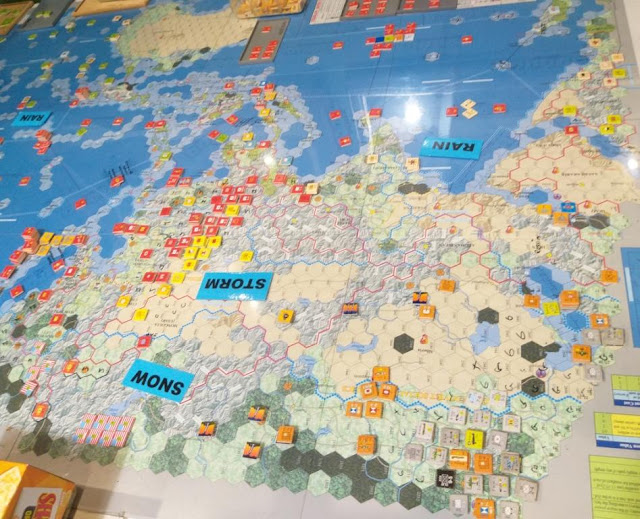 All quiet in China as well.
In the Pacific the US did have a better turn against the Japanese.

Here is an excerpt of Mike's write up that he posts to the Facebook World In Flames Group regarding the US in the Pacific:

"they searched and found the CV Akagi and its escorting CA on an excellently rolled 3 – just what they needed, japan rolled an 8! Enjoying a 3 to 1 majority in the air they promptly shot down the Akagi’s FTR air group, but cleared through the Akagi’s Torp/bomber group, but then rolled a 6+ on all of their 4 dice AA roll which blew the attacking CV bomber to bits! Ironically the Japanese 4 dice AA counter roll saw him roll the expected 2, aborting only 2 points of attacking 6 NAV points. The Japanese were a bit luckier in their saves as both D’s were saved, and with no air groups left on the Akagi aborted the sea area. The search outside Pearl was also successful for the US damaging the Jap CA and shooting down another CV airgroup, with no air cover the Japanese vacate the sea area"