The Axis maintain pressure on the Soviets and the Ural pocket starts to collapse.  The bad weather has not been bad enough, but maybe the current storm may help (at least there won't be any activity by the Luftwaffe). 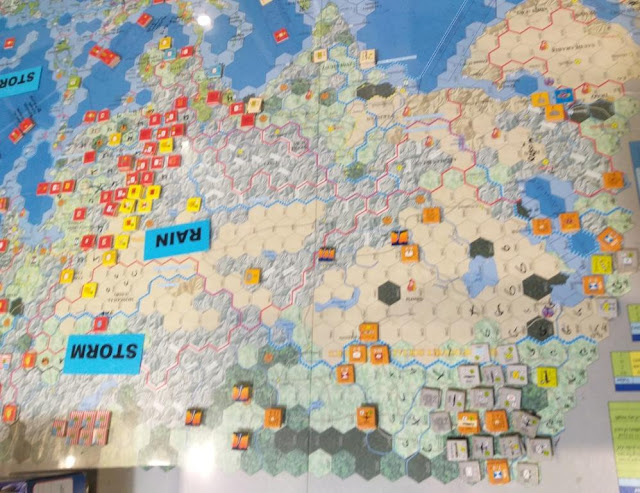 There has also been desperate fighting in the eastern Caucasus.
The air and land war has been merciless.
The Nationalist Chinese withstood an onslaught in an amazing show of puck and damn good luck!
However the US Navy has not been so lucky, suffering significant losses for nothing in return 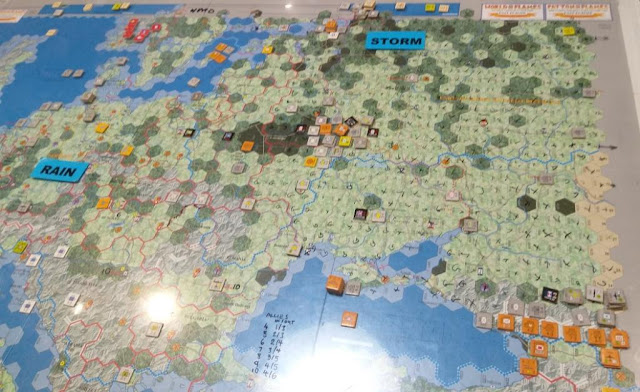 The brave Soviet Baltic fleet is hunting for the German convoys,
while trying to avoid the Scharnhorst.

My write is is nothing compared to Michael's which appears on the Facebook World in Flames Group.  His photos are better too, but I haven't included them.

Axis impulse with only rain in the Artic and clear everywhere else sees the GERM and Italian players both take Land impulses. This could be their last impulse (2) for this turn if the Allies risk a pass to end the turn on a 1 or 2. Italy’s first Land for a long time allows then to reform their N African/ Algerian front line with the help of a GERM Mtn Corps which was flown in Aug. In Egypt, a marginally unsuccessful GStrike on Cairo sees the Italian looking for easier prey, as they swing North to overwhelm the 1 factor TER XXX defending Jerusalem. Cairo is surrounded, and the Suez falls into Italian hands. GERM launches multiple GStrikes against the defenders of Magnitogorsk, the Caucasus and the Gomel Pocket with no success as two of the GERM bombers are shot down. But it is not one-way traffic as two of the defending Russian FTRs are also shot down, including the valuable 7 Factor which has caused the GERM a lot of lost JU88s. One of the FTRs was shot down conducting a ‘bounced combat’ against a Stuka which is always annoying for the attacking FTR, but a double 1 from a rear gunner will do that! So, no attacks for the GERM in this partial fine impulse, a great relief for the Russian and the Allies. The GERM will risk another impulse as he has extra aircraft to improve the odds as all the Russian FTRs have now flown. In the Pacific, Japan’s combined sees a rebasing of several TPT/AMPHs and a +9 land attack against GEN Chiang fails badly. A not untypical roll for the mixed performing Japanese land Army of 3 for a one loss and all inverted. What should have been the clearance of this ‘Chiang pocket’ and the release of the Southern Army for ‘other’ operations – like the Philippines and Batavia, sees this Japanese ‘Army of the South’ inverted and mired in wasted and futile losses – more than a little frustrating.
Allied impulse and another ‘Big Three’ conference decides that with the Allied naval moves from the previous impulse having secured the convoy lanes, all the Axis subs having already sailed, and the Russian  line unchanged, the Allies decided to all take a pass to attempt an EOT roll of 2. The Russian player with a similar result as JUL/AUG fails to save the Motherland rolling a 9!

The Axis, much relieved that they have a further impulse roll a 5, modified 6 with the weather remining unchanged (Rain in the Artic and N Monsoon) but advancing the EOT by 2. Japan taking advantage of the failed pass impulse, port strikes the Pacific Fleet (3x CVs) at Midway, again complete surprise with 2 – 10 split in Japan’s favour. Despite the rain and with no AA roll, the long-range NAV from Kwajalein sinks the USS Hornet in the minor port, shifting the naval balance for at least the short term, back in Japan’s favour. The CA Vincennes is also caught outside the Marshall Island with no air cover by Japanese NAVs and sunk – it has been an expensive two impulses for the US with the loss of a fast TPT, the CV Hornet and its air compliment (both sunk by Port Strike)  and 2 x CA’s for no loss to the Japanese. The US has been significantly unlucky with the Japanese rolling 2’s and 3’s for their last 4 search rolls and the US 9’s and 10’s, compounded by several failed save rolls. Japan knows this won’t last much longer but is buoyed by its Naval successes after its land failure. The Japanese invade a random Island of NEI preparing landing sites for the Batavia assaults in N/D. The GERM takes a land to launch their SEP/OCT offensive with 4 x GStrikes with an inversion against one of the defenders of Magnitogorsk, this offsets the rain, and an attack is declared. An average dice roll sees the city fall with a ½ invert and a 1 loss to the GERM. In the Caucasus the attack fails with an ordinary roll and  despite the two Corps being inverted for +4, +2 for the HQ at 2:1 odds,  the Mountains remain in Russian hands after a 1/1 loss each – no break through this turn for the GERM, the grind continues. The Italians advance to surround Cairo and await an inversion of the OOS Indian MIL. The GERM player fails to end the turn on a 1 and the Allies ‘have a go’.

The US decides to focus on N Africa as he now owns the bulk of the Allied land units ‘in theatre’ and takes a land, with both the Russian and CMWLT electing to take combines.  The CMWLTH hoping to cause some attrition on the Axis acft and SCS in the Bay of Biscay searches unsuccessfully, He decides to Strat bomb Paris again, but drops leaflets instead of bombs and returns home unimpressed. Surprisingly unlucky multiple GStrikes for the Allies against the Italian Army in North Africa results in not a single inversion, and so no attacks are declared. It was however not all good news for the Axis as two of the three valuable FTRS in N Africa were shot down by the Allies over Algeria. Embarrassingly one was lost to the Bolton Paul Defiant – really, attack them from the front not the rear, they may look like a Hurricane, but they are not. Russia sails the Leningrad fleet to hunt for the last few GERM Convoys but fail to find with a rare 10 search roll, Scharnhorst the escorting BC rolls declines intervention by rolling a 9 – apparently nothing to see in the grey seas of the Baltic. The Russian land units cover the single loss in the Urals and a Gstrike by the last Russian Long-Range bomber finds and inverts Rommel on a 1, an important result as he is the leading HQ. The Russian recognising every +1 is important spends 4 O-Points to reinvert HQ Timoshenko in Chelyabinsk, effectively adding a -$ to the next GERM attack. Again, the Soviets fail to end their EOT roll on a 3, with the turn advancing by 2 with a bonus impulse for the Axis.

However, the excitement of the bonus impulse mellows as finally the weather Gods lend a helping hand to the Russians – apparently Stalin has opened the Orthodox Churches, and a 9 is rolled for weather. Storm in the N Monsoon and most importantly in the Artic, Russia is safe this turn. Overall the weather for S/O has been in favour of the Allies (poor/bad weather every impulse) but balancing that out has been the EOT rolls have in favoured the Axis. The Land war for the Axis has been poor with only one of four land attacks during the turn being successful, due in part to bad weather and poor GStrikes but mostly to low rolling. However, the attack against the Urals city of Magnitogorsk was an important success and in the Pacific it has been Japanese success at sea mitigated by 1 awful land roll (3) . Next session will see Japan taking advantage of the US distraction in ‘lands’ in N Africa and take a Naval to hunt US convoys hoping to put US forces OOS at the EOT. Italy will attempt to GStrike Cairo and take the city, and GERM with most of its Land Army inverted may decided to take a Combined and sail the Bismarck against British convoys although it does have a +6 ordinary attack against the Urals city of Chelyabinsk if he is feeling ‘lucky or he may be simple patiently and wait for Nov/Dec when his HQ’s and air-force is upright and the weather might improve.
Posted by Sun of York at 6:35 PM