The Union carried forward 173 supply and received 180.  They implement a draft system which caused riots to breakout in New York city and it will be necessary to send a division, 4,000 men, to put an end to that.  As the Emancipation Act has not been declared, the draft cannot tap into the swelling number of coloured folk who are wanting to fight for their rights.  This reduces the number of Personnel Points by 10 per cycle (but to a minimum of at least 10 - which is better than the 5 that the Union were facing otherwise).  The draft call gives the Confederates three political points.  The Confederates now have a one political point ascendency, but that is not good for anything and in fact it is good for nothing.

The North get 50 personnel points.

The Confederates carry forward 129 and receive 95 from major city supply and a 3 from imports.  Total 227 supply and 10 personnel points.

The Union start training 10,000 militia in Baltimore to become a single 10,000 strong infantry division.  In Washington 6,000 militia commence training to form two 3,000 strong infantry divisions.  In Bowling Green, 3,000 militia undergo the same process.  From Bowling Green and St Louis, small 3,000 man divisions commence augmentation into 10,000 man divisions.  A 3,000 strong cavalry division is initiated along with raising 12.000 garrison troops.  A supply train is ordered and also a Navy Flotilla, River Flotilla and an Ironclad.  The Union are left with 106 supply.

The Confederates recruit 10,000 garrison troops.  The silver lining is that in 1863 they can absorb up to 2,000 garrison troops into each infantry division per month [22.7].  They have 207 supply left.  They complete the fort at Petersburg and build one at Helena on the Mississippi which reduces the supply total to 127.

The Confederates deploy 8,000 garrison troops, a 10,000 strong division and 2,000 cavalry troopers to Richmond.  Other 10,000 man infantry divisions go to Raleigh and New Orleans.  An ironclad starts fitout in New Orleans and Forrest says damn the curtains, launch the thing straight away.  It floats, but for how long?

The Union receive another Naval Flotilla and deploy 10,000 strong infantry divisions to Washington, Baltimore, St Louis, Cairo and Bowling Green.  This deployment was the results of the call for volunteers back in late September.  The Union could actually use a new corps, but fail to generate any.  Luckily Sedgewick is in place to takeover Lyon's old corps.

There are no partisans.

Stuart returns from sick leave and takes command of his old cavalry corps, ready to strike fear into the hearts of those northern aggressors.  Ewell appears in New Orleans where he is given the plans for the building of a massive fortress at Vicksburg.

No militia appear in Kentucky or Missouri this month.  I've also just realised that I've been giving the Union only half of the militia they should have been receiving from Kentucky.  Doh!


The Union keep up the momentum getting the 4 chit.

I have been wracked with indecision about how best to use the four free initiatives that the Union have.  So much to do.

Pope is directed to send the division he has with him to New York to quell the draft riots (which are serious and see 1,000 military casualties; the civilian casualties are not released).  He then gets on with repairing the rail lines.

The new division in Bowling Green is ordered to rail a brigade to Dalton, TN to block Bruckner's invasion of East Tennessee and then to march to Nashville.

The new division in Cairo takes river transport to Paris and then starts to march to join McCook.

McCook is ordered to push south to keep the pressure up on the Confederates.  They are nowhere in sight, but he is able to clear railway lines and improve the Union supply situation.

Banks displays initiative, and liberates Greenville, AL, on his way to the Gulf.  Halleck and Hooker decide not to move.

Buell, while maintaining his base at Grand Junction, sweeps up to the rebel militia at Ripley and sends a brigade to cut the railway line just south of Hernando to delay the retreat of Johnston's Army of the Mississippi.

The naval flotilla blockading New Orleans moves out to deep water (and thereby avoid any sneak attacks from the new Confederate ironclad).

Over in the East, McClernand takes his corps down towards Lynchburg.  Burnside is too busy rounding up stragglers to do anything, but Franklin moves his corps down to the James, just outside Richmond.  Meade follows and takes Hanover Junction.  Sedgewick doesn't get any orders and stays idle north of the York.  McPherson, who should cross the James and join McClellan, fails to move (explanations could be the state of the James river at this time of the year, not just general incompetence).  McClellan, with his back to a river, faced by multiple Confederate armies, unsurprisingly fails to move.  Howard, in charge of reinforcements in Washington, has some nice parades, but fails to send any troops to the front.

McClellan has a serious think about attacking Bragg, but decides the time is not right.

McClernand thinks of doing an attacker wriggle to take Lynchburg, but decides it would be too embarrassing.

Johnston struggles south while Forrest cuts a way through the Union cavalry.

In the east Stuart is dispatched to secure Lynchburg.  Beauregard then takes 19,000 men from Richmond and joins D Hill.  Hindman and 2,000 men are sent west (but slowly).

Smith with the (in name only) Army of Northern Virginia, decides to join Hindman on the march.

Forrest decides to leave Ewell in charge of New Orleans and, leaving him a brigade, takes 8,000 men up the Mississippi.

Beauregard attacks McClellan on the 131-160 column of CRT 3 hoping to push him back across the James.  The Union are not going to budge.  Both sides lose 3,000 men.

The Confederates attempting to secure the James.
(Note: the leader labeled "Longstreet" is "Stuart") 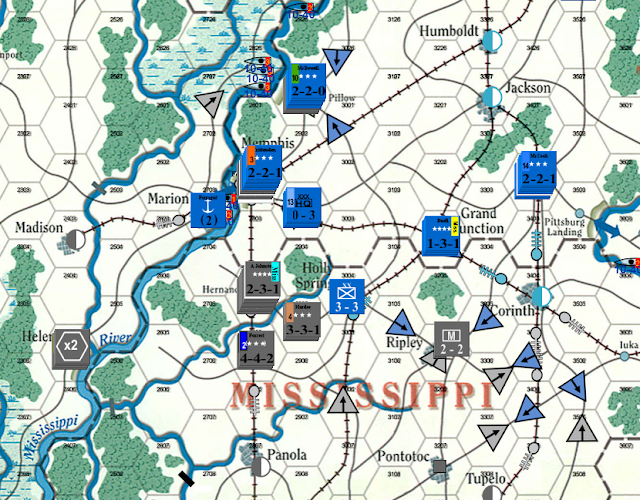 The Union get the one chit.

The Army of the Mississippi continues with its escape.  Johnston first uses Hardee to clear the road at Holy Springs.  Both sides lose 1,000 men, but the Union don't budge.  Johnston then tries, but has the same result.  Forrest is sent to Corinth to stop McCook, or rather, to delay McCook (the Confederates only have 2,000 troopers).

In the East Smith force marches to join Stuart and sends Hill to join Beauregard.

The final free initiative is used to move a lost militia unit to Atlanta.

Price moves down the Neuse River to pick up troops.

Jackson is on the march.  He's not sure where to, but he know he has to do something.

Polk holds put in the fort at Helena, his job being to stop any Yankee boats that might want to sail down the mighty Mississippi.

The Army of the Mississippi fails to attack (all three generals failed to activate).  Johnston is now thinking he should have burnt his supply wagon and gone directly south.

Beauregard, who now has 63,000 men to McClellan's 17,000 fails to attack.  However Bragg and D Hill attack.  Bragg goes first on the 201-250 column of CRT 3.  Both sides lose 2,000 men, but the Union don't budge.  Bragg had also used up 2 supply.  Hill attacks on the 161-200 column of CRT 3.  Again both sides lose 2,000 men but McClellan stays put, furiously writing orders for reinforcements.  Luckily he was so engrossed scribbling away that the cannonball that had his name on it sailed right over his head as he was crouched over his desk.

McClellan is given his request and reinforcements are sent across the James, boosting his numbers to 35,000 effectives.  It was good this was done as none of the Union commanders on this front showed much initiative except for McClernand who continued to secure the headwaters of the James and Burnside who rounds up a lost brigade and sends it to the front.

The Western Theatre also sees a lack of Union activity, except for planning for the surrender parties at Fort Pillow and Memphis.

The Union get the one chit again.

Hardee finally clears the way for the Army of the Mississippi to continue its retreat.

The Railroad Repair unit starts to deconstruct some rail lines to get essential supplies.

Bruckner is ordered to start moving down the Alabama river.

Forrest decides to pull back to Pontotoc, MI.  With only 2,000 troopers he is significantly outnumbered by Buell who has 6,000.

On the James, with close to parity of numbers, Beauregard has no intention of entering into a battle of attrition.  The Confederates realise they need a Jackson or a Lee back here in the east.

The Union order Pope to finish repairing the rail lines and then move down to the James to support McClernand.

Burnside rounds up another stray brigade.  Sedgewick prepares to cross the James, increasing the noose around Richmond.  Nothing else stirs in the Union camps in the East.

Buell does another cavalry sweep, retaking Corinth, but then pulling back to Grand Junction to protect the rear of the Union armies besieging Memphis and Fort Pillow.

All very quiet, but I guess it is the depths of winter.

The Union return to action with the five chit.

McCook and the 10,000 reinforcements from Cairo are hurried along to Corinth.

Howard is given a kick up the bum and and told to send reinforcements to Meade and get himself over to Culpepper to take over command of the vacant XXII Corps.  Sedgewick is given permission to cross the James and further invest Richmond.

Banks is told to hurry up and get to the Gulf.

Burnside in a continued demonstration of initiative brings his 1,000 stragglers down to the James.  Franklin takes a division from Meade, but is still part of the investment of Richmond.

Johnston get's his army to Grenada, losing 1,000 troops on the way.  Polk is ordered north, and although he goes, he is busy looking over his shoulder at Charleston which is seeing a lot of US naval activity.  Breckinridge is pulled out of Richmond, leaving Taylor in command of the garrison.  In doing so he sends reinforcements to Beauregard (9,000 garrison troops that can be absorbed into his depleted divisions).

Hindman decides to do something, but then realises he has only the 4,000 militia in Smith's Army of Northern Virginia that he can have access to.  He therefore decides to stay put.

Forrest hatches a plan to recruit partisans, but then realises he would be out of supply. 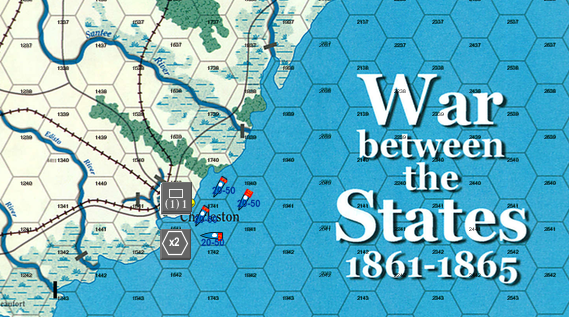 Charleston, SC, looks vulnerable, but there are no convenient landing areas.
But maybe the Confederates don't know that? 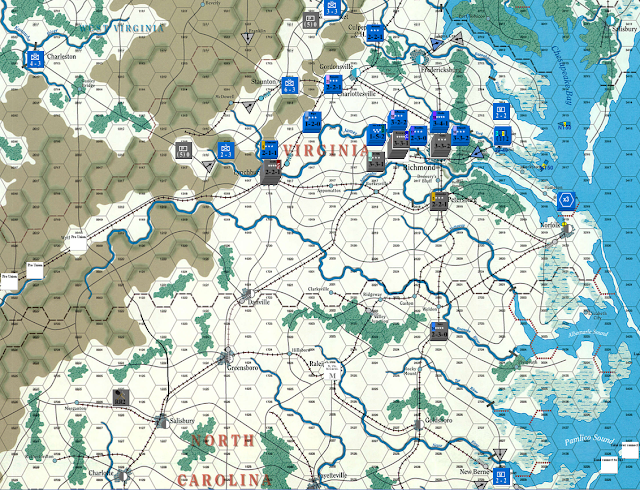 Is it big out west or is it just the magnification?

Are both the Union and the Confederates overstretched when it comes to Operations in the Gulf?

The Union lost 18,000 men in the first four weeks of 1863.  The Confederates lost 16,000.  However with the imminent surrender of Memphis and Fort Pillow that number will more than double.