I participated in two races and failed to place in either.  At least I didn't die. 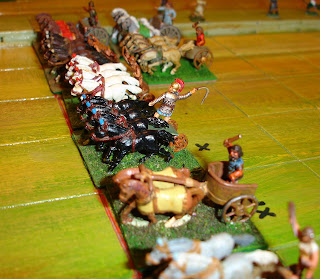 The first race had eight entrants.  My chariot is the one in the middle with the four black horses. 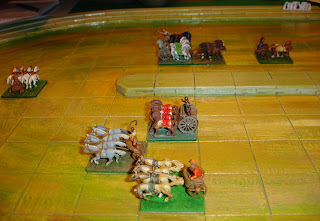 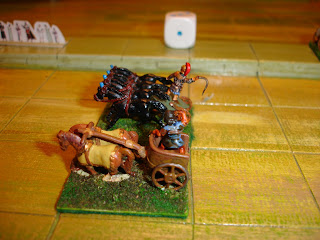 But then I got wiped and had to lose a turn. 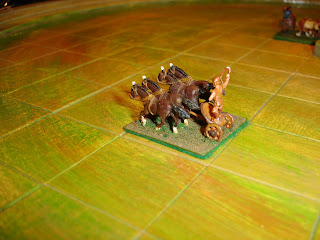 Andrew, raw novice, streaked past the winning line to become experienced and deny everyone a chance to even place. 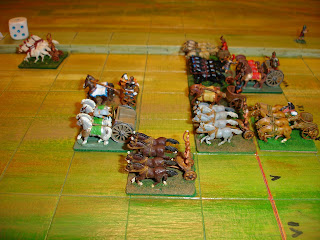 For the second race we had ten chariots competing for glory. 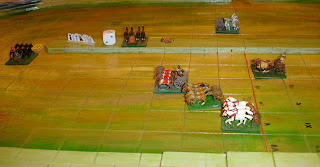 By the time the race finished there were only six left.

The chariot with the red blankets won and the one with the four white horses (Gerry) which had been in the lead all the way placed second.  All the rest of the surviving chariots were lapped.  There were four deaths: Mario (crashed, fled, run over by his son Daniel who went on to win), Andrew (the previous winner - crashed, survived, tried to leap onto a passing chariot - it went badly), Brendan (crashed) and Oliver (crashed).  Special mention must go to Paul, who crashed, but was able to regain an empty chariot as it passed by.  The other surviving chariots were David's (green blankets - he also served as ring master), Stephen B and myself.

The flier for the race meeting can be found here:
http://napoleonicwargamingsociety.blogspot.com.au/2015/08/next-race-meeting.html