War For The Union via Vassal September 1861

The Union call up another 100,000 militia and commission a new naval squadron at Cairo.
Curtis now with 20,000 men moves into the swamp south of New Madrid.
Freemont also with 20,000 men starts to move towards Kentucky hoping he can win laurels if he can bring them into the war by demonstrating how presidential he can be.
A battery is commenced in Cairo which is also reinforced by a further 15,000 men railed in from Cincinnati, but the big news is that Lyons has attached Price. He has 20,000 militia to Price's 10,000 volunteers, a 2:1 attack with a no dice modifier. The die roll is a 9.  Losses are minimal, but Price is bundled out of Springfield, MO, with 2 fatigue.
In the east, 15,000 men are sent to reinforce McDowell at Hagerstown.  He now matches the rebels before him.  An extra 10,000 men sail into New Berne. McClellan works on Washington's defences building forts there and in Baltimore.
Butler attacks out of Ft Monroe with his 20,000 men. The 10,000 Confederates are entrenched behind a river, the 3:2 attack has -2 modifier, but the die roll is a 10!  Both sides suffer 5,000 casualties, and fatigue, but the Rebels retreat gaining more fatigue.  Butler doesn't pursue.
The Confederates call for more volunteers to fight for the rights.
In the West the Confederates change commanders.  A S Johnston moves to Ft Pillow where there are now 15,000 men, taking over Polk's command, while he moves to Nashville where there are also 15,000 men.
Price starts limping back to Arkansas.  Some 5,000 volunteers start ferrying down to Ft Jackson at the mouth of the Mississippi.
In what might be an unwise move, Beauregard takes his 20,000 men and meets up with Magruder's 10,000 and attacks the Yankees at New Berne.  Magruder returns to Richmond to gather some more troops.  J E Johnston has to fall back across the Potomac to cover Beauregard's absence.  Beauregard's attack is 3:2 with a +2.  The die roll is a 2.  Confederate hopes for a quick victory are dashed.  Both sides lose 5,000 men. 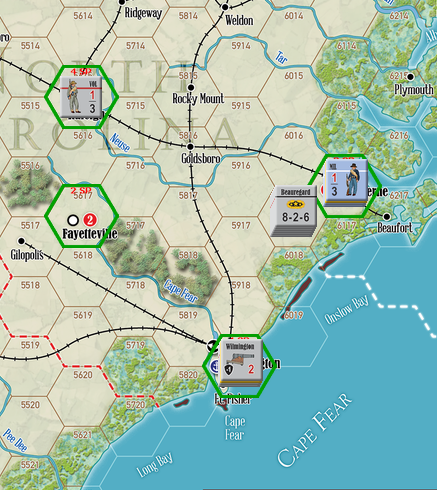 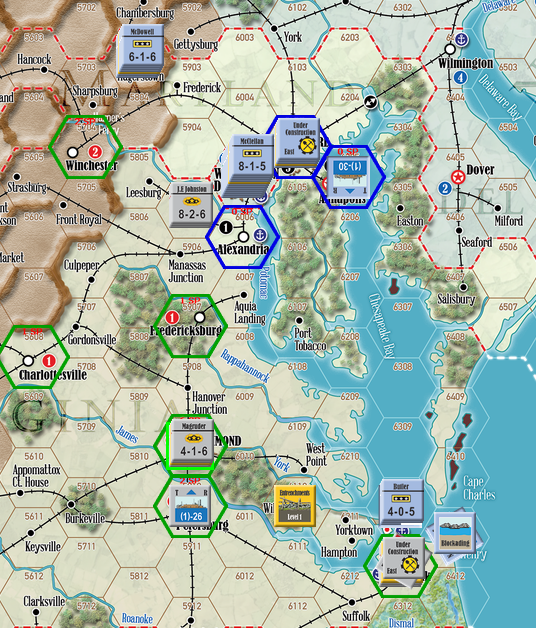 The way is now clear for some Yankee aggression 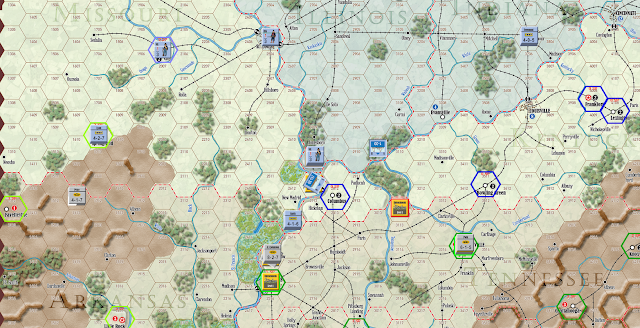 The West
What will Kentucky do?

Kentucky decides to join the Union with a roll of a 9 needing a 5 or more.  Freemont claims this outcome as proof of his presidential potential states petitioning to be allowed to return to Washington to start fund raising now that the war is all but won.
Confederate supply capacity.  The Vassal module reports this as East 107, Trans 15. The good people of Texas have conniptions at being labelled "Trans".  The SC hasn't taken into account the Union holding New Berne (probably I haven't done something) so can be reduced by 2.  The Union are successfully blockading Norfolk so it drops from 3 to 2.  The new SC is 119 (which is down three on it commencing total).
The Confederates have 4 Key Industrial Centres which brings their Resource point total to 8.
Posted by Sun of York at 10:53 PM