War For The Union via Vassal July 1861

Fearing a Rebel attack on Washington, the Union use their river transport in Baltimore to ferry the troops in Alexandria to Washington and then sailing it back to Annapolis.  Troops are railed from Pittsburgh, Harrisburg and Philadelphia to Washington to give McDowell a force of 50,000 men.

The Union fleet sails from Philadelphia to Cape Henry to commence a blockade of Norfolk.

In the West 10,00 men are railed from Columbus to Rolla along with a further 5,000 from Indianapolis.  In the first die roll of the game Lyon force marches to Rolla to join the army of the far west (his militia arrive fatigued).

In the final act of the Union turn 10,000 blue coats armed with picks and shovels sail from St Louis to Cairo.

Spies are everywhere.  In Missouri, Price with 10,000 men starts to march on Springfield.  He has heard Lyons might be called east.

A S Johnston and 10,000 men move from Nashville to Ft Donelson, while 5,000 men rail from Atlanta to cover the city he has vacated.  Polk in Memphis wants to take the war to the Union, but is blocked by neutral Kentucky, as well as the need to defend the Mississippi.  He picks up some picks and shovels and moves to Ft Pillow to position 5,000 to start some fortifications and then returns to Memphis to call for more volunteers.

Down in Texas, while the trains are still running, 5,000 men move from Houston to Galveston.

5,000 men rail from Raleigh to garrison Wilmington. Troops rail from Lynchburg to Fredericksburg bringing the total infantry there to 10,000 and they are then joined by 5,000 cavalry. Beauregard takes his 20,000 men to Leesburg but then moves to Fredericksburg to take command of the troops there.

In a bold move, J E Johnston abandons Winchester and moves to Leesburg and with a combined army of 30,000 men attacks the 15,000 Union infantry south of Hagerstown.  It is a 3:2 attack with a +2.  The die roll is a 10 and the Confederacy is off to a flying start. They narrowly avoid losses, but do gain fatigue.  The Union suffer 5,000 casualties and gain 3 fatigue and retreat to Hagerstown with the Confederates following them.

At this juncture the Union have to remove half of their militia. 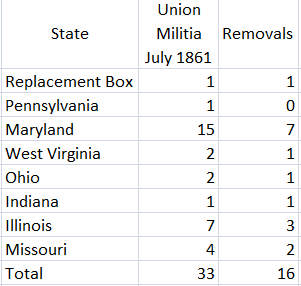 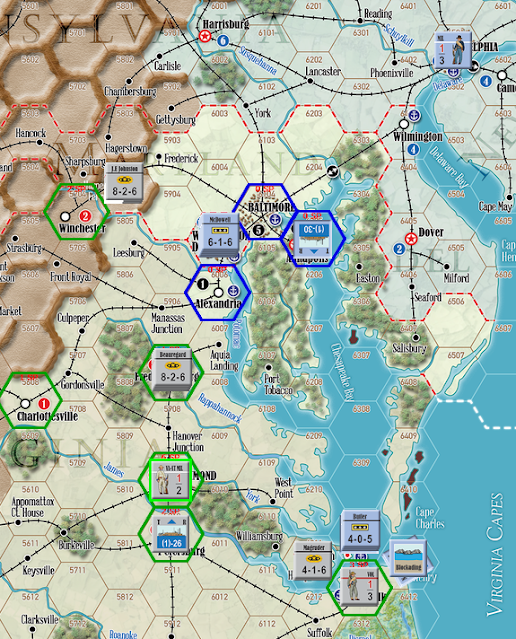 The Eastern Theatre looking particularly denuded of blue.
The troops defeated by A S Johnston were stood down. 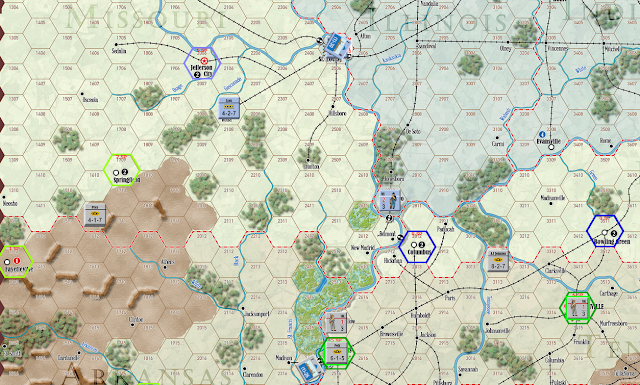