A couple of things inspired me to get out the Napoleonics and put on a game for Darren and Des.  Des arrived first and chose the Austrians.  Darren would have to make do with the French.  The scenario is Austrians at Bay for the original green Scenario book for the Avalon Hill Napoleon's Battles edition.

While waiting for Darren I walked Des through the rules and to my horror found I had forgot more than I remembered.  Well, not quiet, but a few key things, the problem being I knew for example how units recovered from disorder in other rules, but couldn't readily recall the method with Napoleon's Battles.  Throw in a very noisy meeting hall and it was a bit stressful.

Never mind, on with the game! 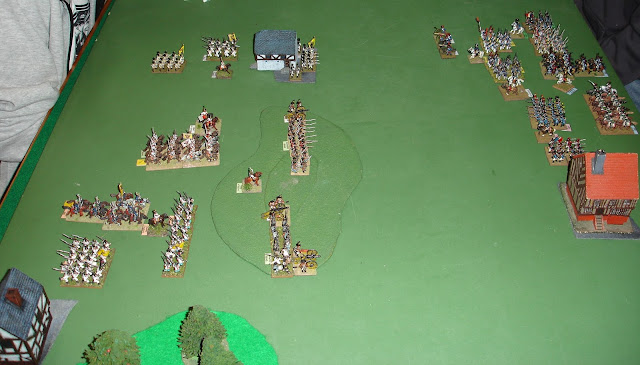 The set up.  My figures, club terrain. 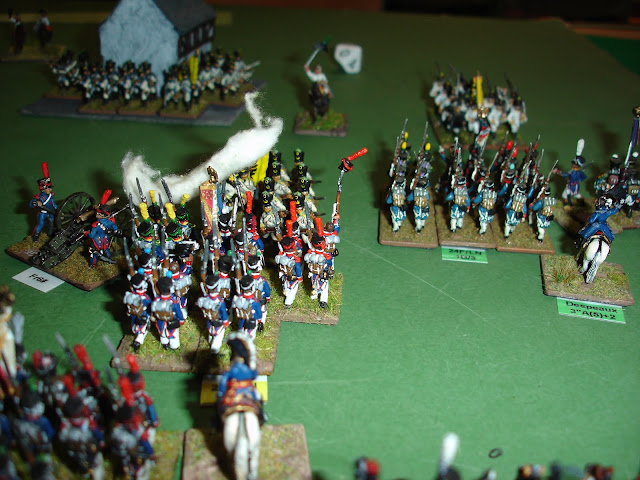 A bit of action.
They were the only two photos I took, being busy umpiring, checking the rules and trying to make myself heard.  We also had to stop the game due to running out of time which was annoying.
However it has left me hungry for more and a determination to brush up on the rules.  I use 3rd Edition with some optional rules from the 4th Edition.
There is lots you can do with Napoleon's Battles, but it requires discipline, both in following the sequence of play and in unit placement (keeping units in command and making space for units to fit).