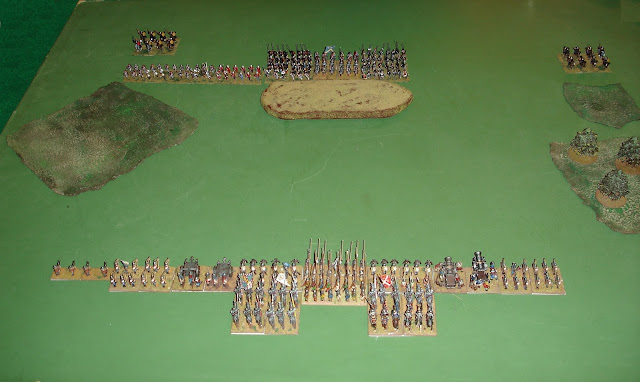 Deployment.
The Burgundians were out scouted, understandable given the Spanish have two units of Jinetes, javelin armed light cavalry.  They can be seen deployed on the fringes of the Spanish army, ready to try and out flank the Burgundians.  Expecting this I had deployed the longbows to face them.

A modest advance by the Burgundians.
The main body of Spanish are hiding behind a hill,
but their harquebusiers are advancing across the broken ground on the left.
The Burgundian Men-at-Arms have become disordered, shuffling to meet this threat.

The main body of the Spanish hasn't budged.
but their wings are closing in.

First blood to the Burgundians as their artillery quickly disperses one unit of Spanish harquebusiers.

The Spanish incursion on the Burgundian right is showing some discretion.
However the Janetes on the left are sweeping round
as the main Spanish body starts to advance.

While the threat to the Burgundian right has receded,
that to the left is now well positioned...

The Men-at-Arms and pike clash and bounce off.
However the Burgundian left is now in real danger as the Spanish are in their rear!

In some hard fighting, the Burgundian pikes and Men-at-Arms have destroyed their opposite numbers, the Spanish commander dying with his Men-at-Arms.
The second unit of Burgundian knights is having a hard time with the remaining Spanish pike.
There has been some tricky manoeuvring and measuring going on,
with push backs, interpenetrations and failed pursuits.

The Burgundian commander has a narrow escape.
The Spanish left wing Jinetes are about to get a hot welcome on their return.
Their companions on their right wing are cleaning up the Burgundian rear.

The returned Jinetes are heading in for a kill, the long range fire from the assembled Burgundian longbow, crossbow and artillery having failed to score a hit
All the other units are recovering their order, ready for the final battle. 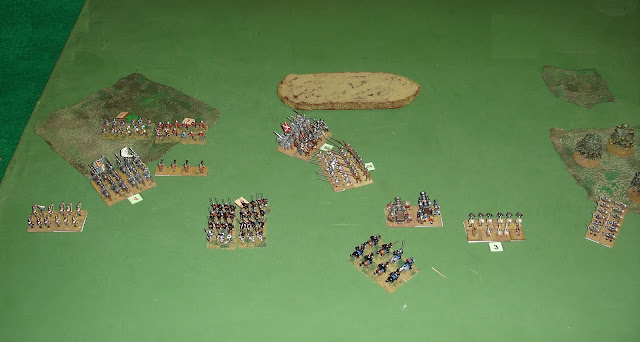 However with the Spanish commander dead and their initiative rerolls used up,
the Burgundians are able to seize the initiative and fire again.
Good bye Jinetes and hello victory!