No, this has nothing to do with Aliens listening in and reading my blog like the Russians do.

It represents an eleven minutes to midnight success of getting to play the X-Files Collectable Card Game with my daughter, something we had been wanting to do all year.  Our last game was in 2009.

What I didn't appreciate until I considered making a post about it was how the game play tells a story.  So that is what you get a long with a picture which has an unexplained phenomena obscuring one card that I am sure was not there when I took took the photo... Spooky! 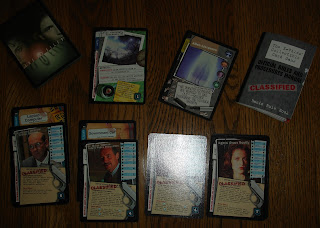 My team of Assistant Director Walter Skinner, boosted by some computer training and issued with a laptop, along with Lt Brian Tillman who had a Government Car, plus Agent Nancy Spiller and Agent Dana Scully successfully investigated the X-file Alien Listeners.

They started in Baltimore, MD, and determined that the result of the events they were investigating had not resulted in death.  They went to Gibsonton, Fl where they discovered that the method was subterfuge.

The next stop was Mahan Propulsion Laboratory, Colson, WA where Skinner was going to try his computer skills, assisted by Brad Wilczek but he couldn't get things to work - Trust No One!

At the Central Prison, Raleigh, NC they determined that the motive was not knowledge.  This narrowed things down to just four possibilities.

After a stuff up at Newark, NJ where they stupidly duplicated past efforts determining the method, they went to Cumberland Prison, VA.  Skinner's attempts to use a wire tap failed due to an equipment malfunction even after they were denied the assistance of Frohike.

Finally, upon searching UFO wreckage at Townsend, WI they found the result of the case was investigation.  From there it was a fifty fifty guess that got them the result.

Equally there was a story on my daughter's side, but this is my blog so the story's mine.

Great way to end the year.

To all my readers, including the Russians and Aliens, Happy New Year!
Posted by Sun of York at 5:00 PM