Seven Pines with Fire and Fury

This has been a major objective for 2014 for me - use my figures to play a game of Fire and Fury.

About ten years ago I was playing Fire and Fury with a group in Canberra.  I had some figures of my own, but not enough to do a scenario.  One of the group decide to sell his 15mm ACW collection and, using the justification that my partner wanted to move to Perth, I bought it.  The rationale being that I would still be able to enjoy the game when I moved, without the risk of not finding players who used the rules and same scale etc.  It has just taken me a while to get my act together.

A second objective was to try out the terrain mat concept to see how it went as I have need of it for other battles.  The surface played well, looked good, was functional.  The only addition would be to secure the joins with tape on the back for the duration of a game.  As luck would have it we ended up fighting on the very spot where the four mats joined.

Apart from adding magnetic stripes to my figures to allow safe transport, the one new thing I needed was some abatis.   I should have done a separate post on them as I am quiet pleased with how they look. They are basically cut back tree armatures from Woodland Scenics, hot glued to pop-sticks and painted brown and flocked.  I still have to make some of those snake fences, but that will now be a project for another day (or year).

For labels I went with white text on blue and grey for the Union and Confederates respectively, sticking them to steel paper.  They looked better than white labels and were generally practical (a few fell off during movement, but didn't really cause much trouble.

What I wanted was a game that would fit within the parameters of a club night.  I found the scenario for Seven Pines under small scenarios for Fire and Fury.  I expected the game to take three hours, all up it was five including set up and packing up.  Here is the link to the WORD document I created for the scenario and have put on my Google drive.

I had drummed up more interest than possibly I could handle; my apologies to Mark B who had to leave before his command became available.  The Confederate offensive was run by Andrew C, with Simon C taking the job of commanding Casey's Division of the Union Keyes' Corps.  When Couch's  Division of Keyes' Corps was triggered command of the Union fell more and more onto the shoulders of Stephen N.

I hadn't played for a good while (my last game was a demo game at Cancon probably five or more years ago).  Simon C knew the rules, but the rest I think were experiencing their first Fire and Fury game.  The advice I gave them was throw tens. 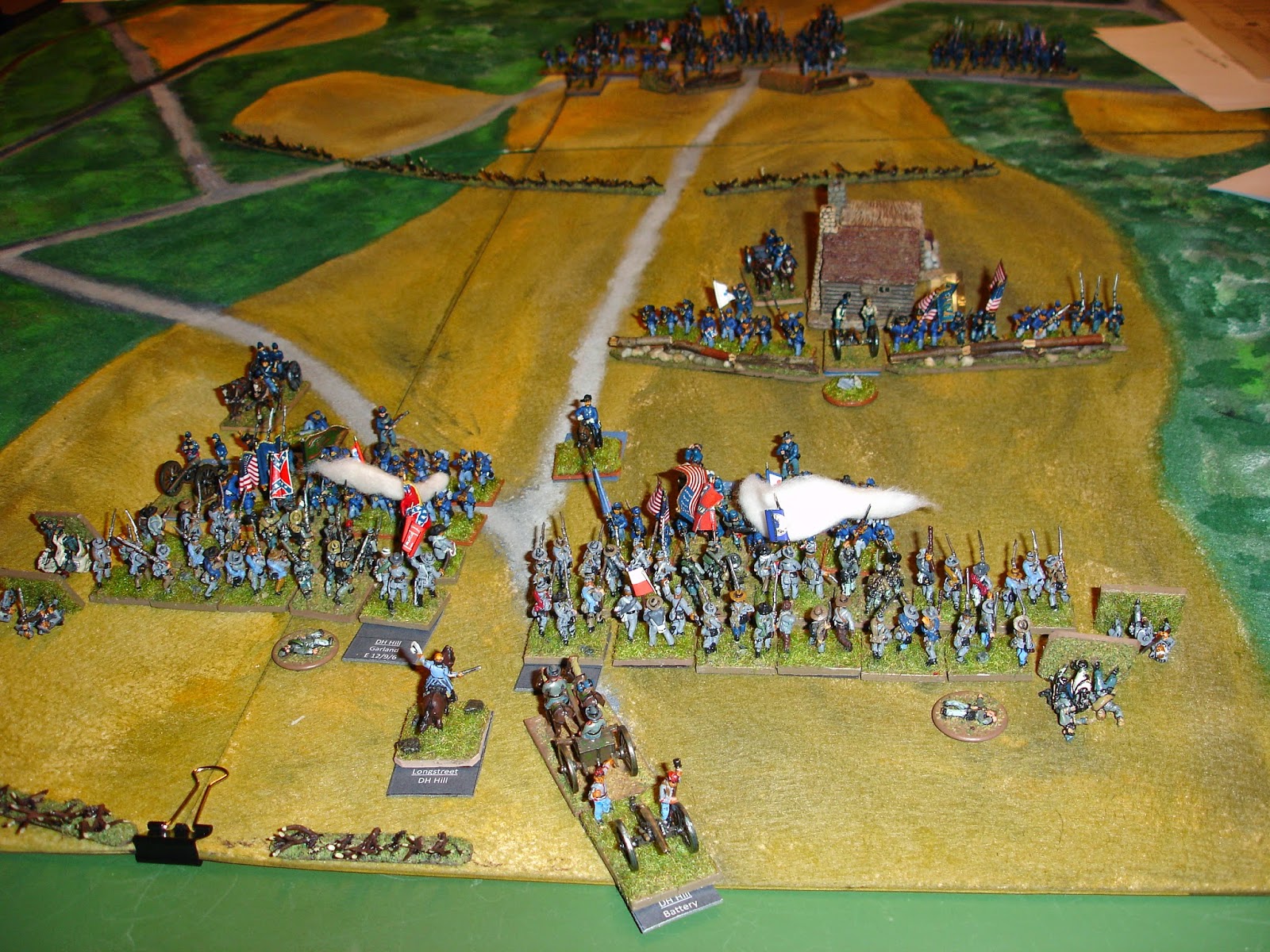 DH Hill's Division arrives at 13:00 and Rodes' Brigade goes in on the south against Palmer's Brigade while Garland's Brigade goes to the north, being disordered crossing the abatis and hitting Naglee's Brigade.  Simon C took my advice to heart and threw tens for both fire defensive fire combats.  Both of the Confederate exceptional brigade commanders leading the charge were killed.  The combats saw what was Rodes' Brigade attack falter while what was Garland's brigade had its attack checked.  I thought at this stage it was going to be a quick game with the Confederates soundly thrashed. 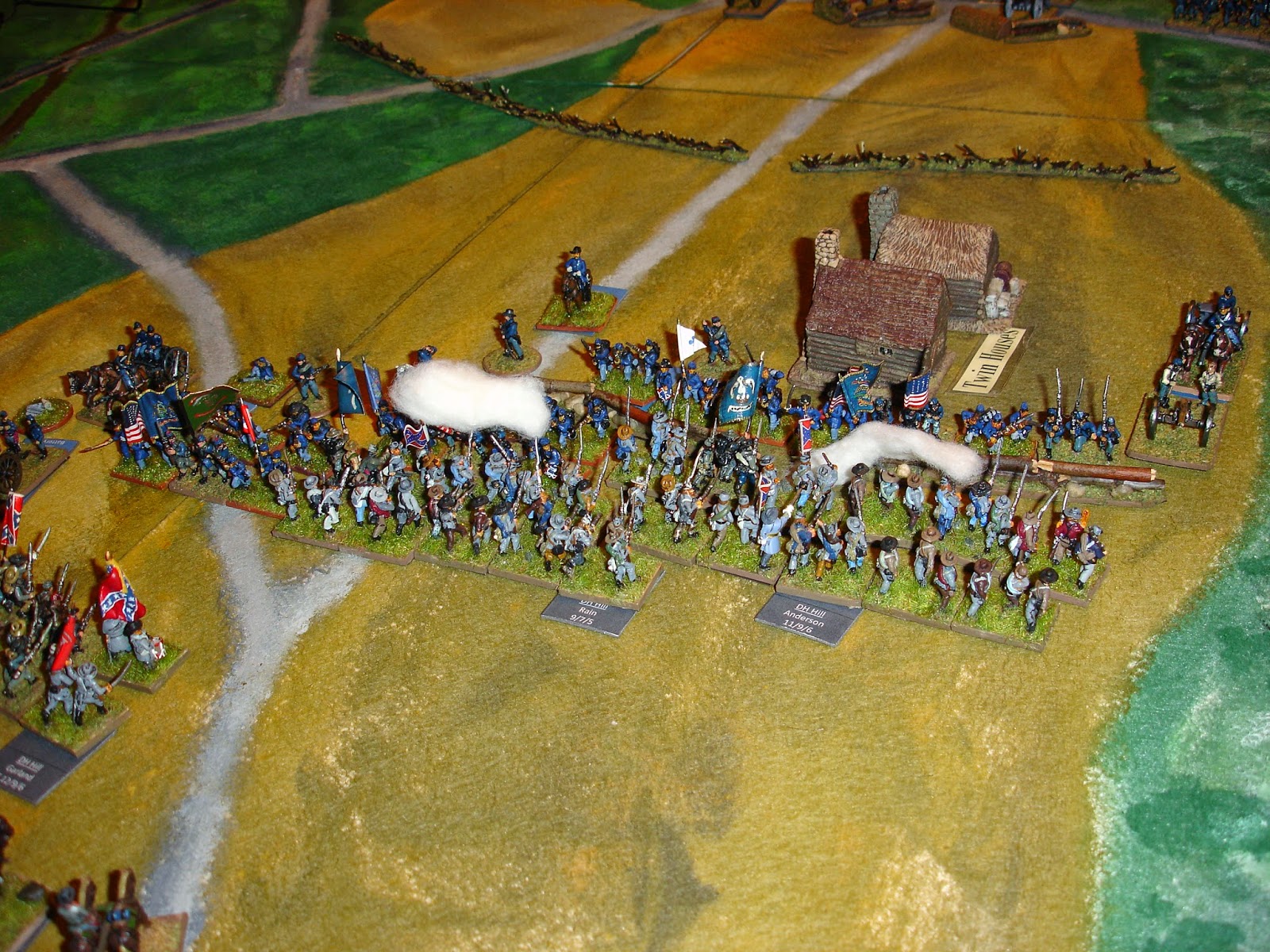 At 13:30 two more rebel brigades arrive and push on to the Twin House redoubt.  The Union had pulled back, perhaps a bit too much as they had limbered up their artillery in order to get it resupplied.  They weren't expecting the rebel reinforcements (all players were ignorant of what, when and where reinforcements appeared). 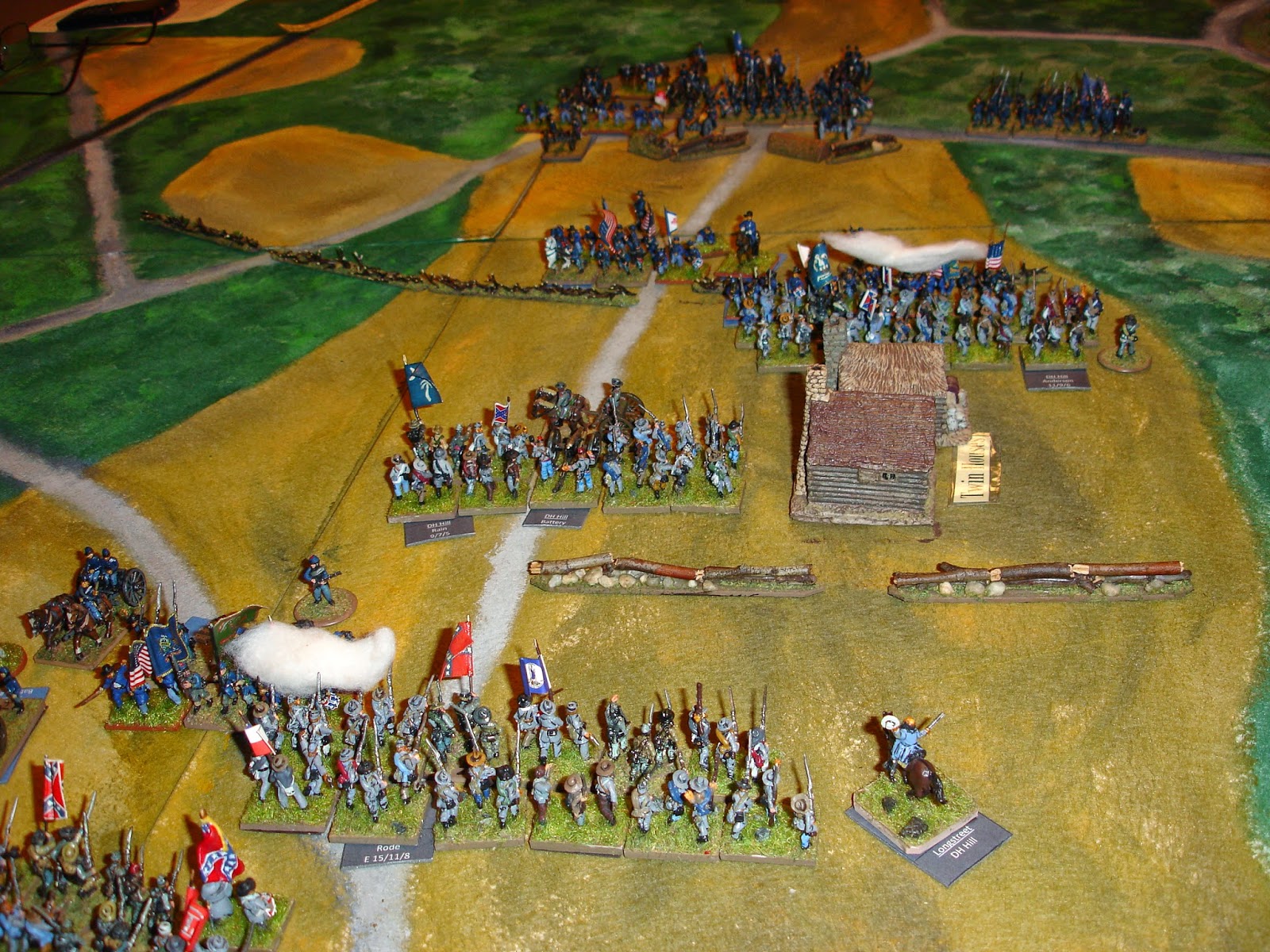 Naglee's brigade fights on, and is assaulted by the reformed Rodes' Brigade with DH Hill cheering them on.  GB Anderson's brigade has pushed on, attacking the Union troops who had fallen back to the second line of abatis.  Rain's brigade sets up for what is expected to be a long firefight. 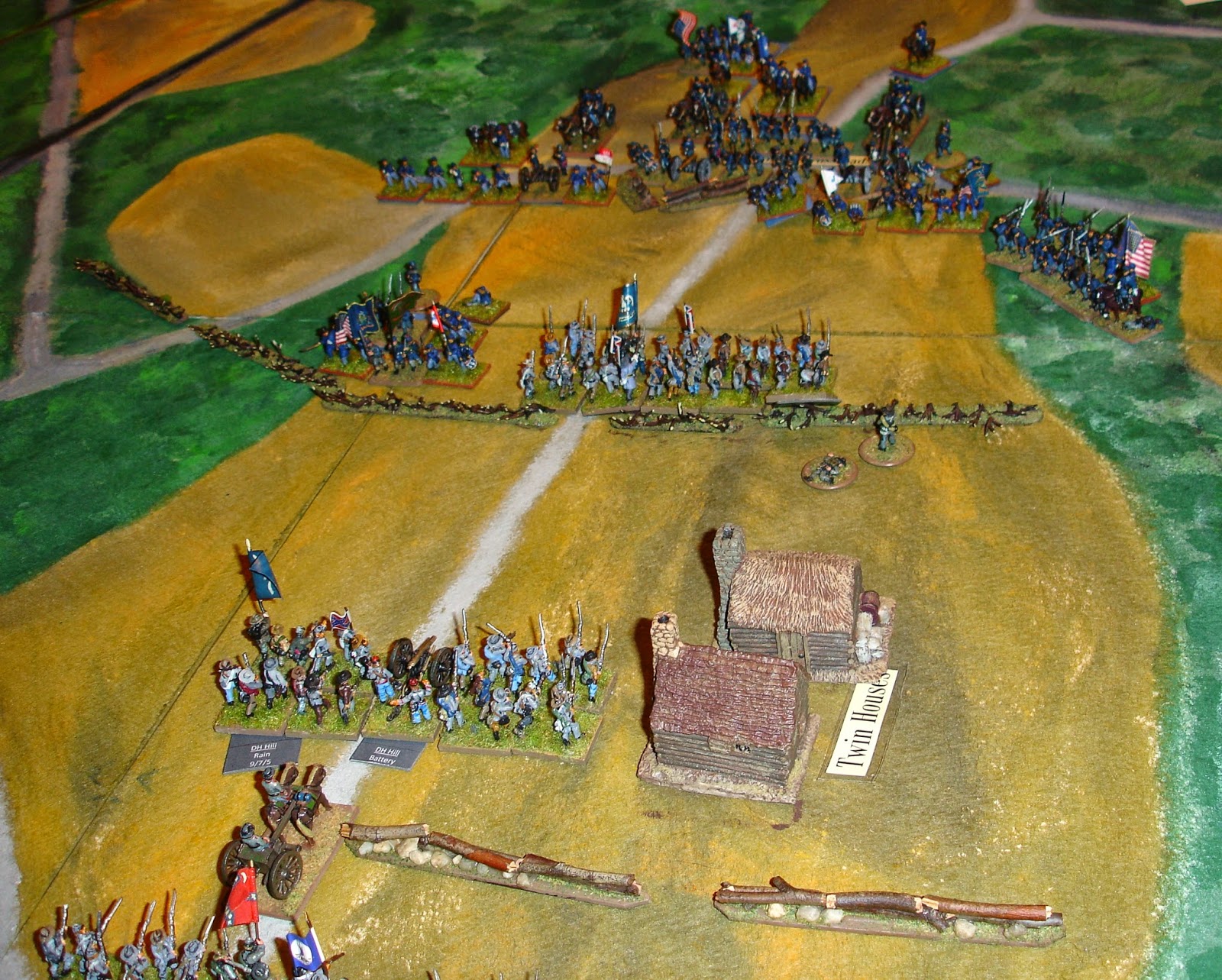 GB Anderson is across the abatis.  Couch's division decides it is time to take action and prepares for a murderous volley and cannonade to drive the rebs back to Richmond. 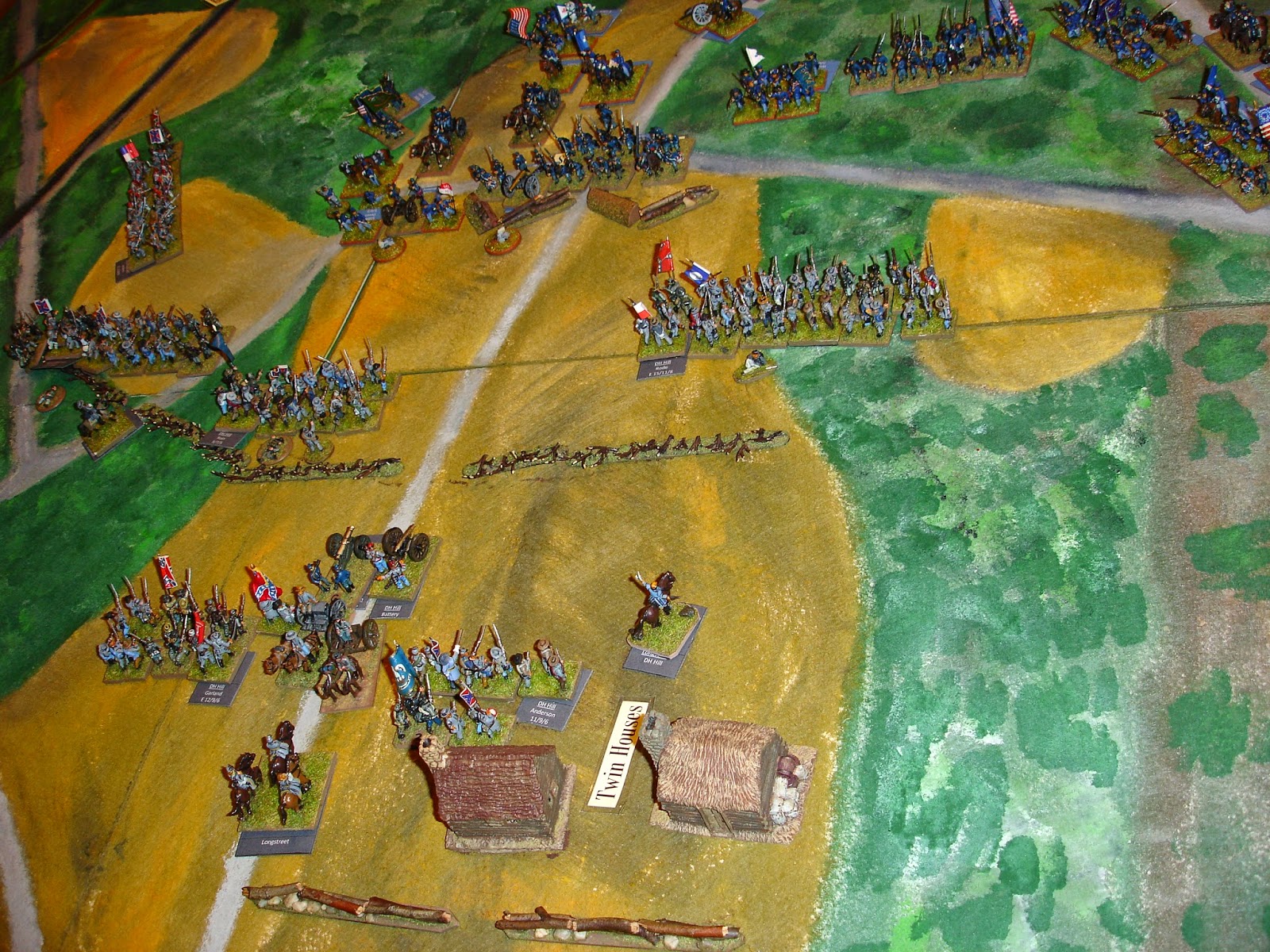 And murderous it was too, with another ten being thrown.  At the time this seemed an excellent outcomes, but the resultant low on ammunition situation caused the Union problems.  It is now 16:00 and RH Anderson's division has arrived, including Jenkin's brigade in a surprise entrance on the Union left.  The Union had their own reinforcements in the form of two brigades of Kearney's Division, Heintzlmann's corps appearing out of the swamp on the Union right. 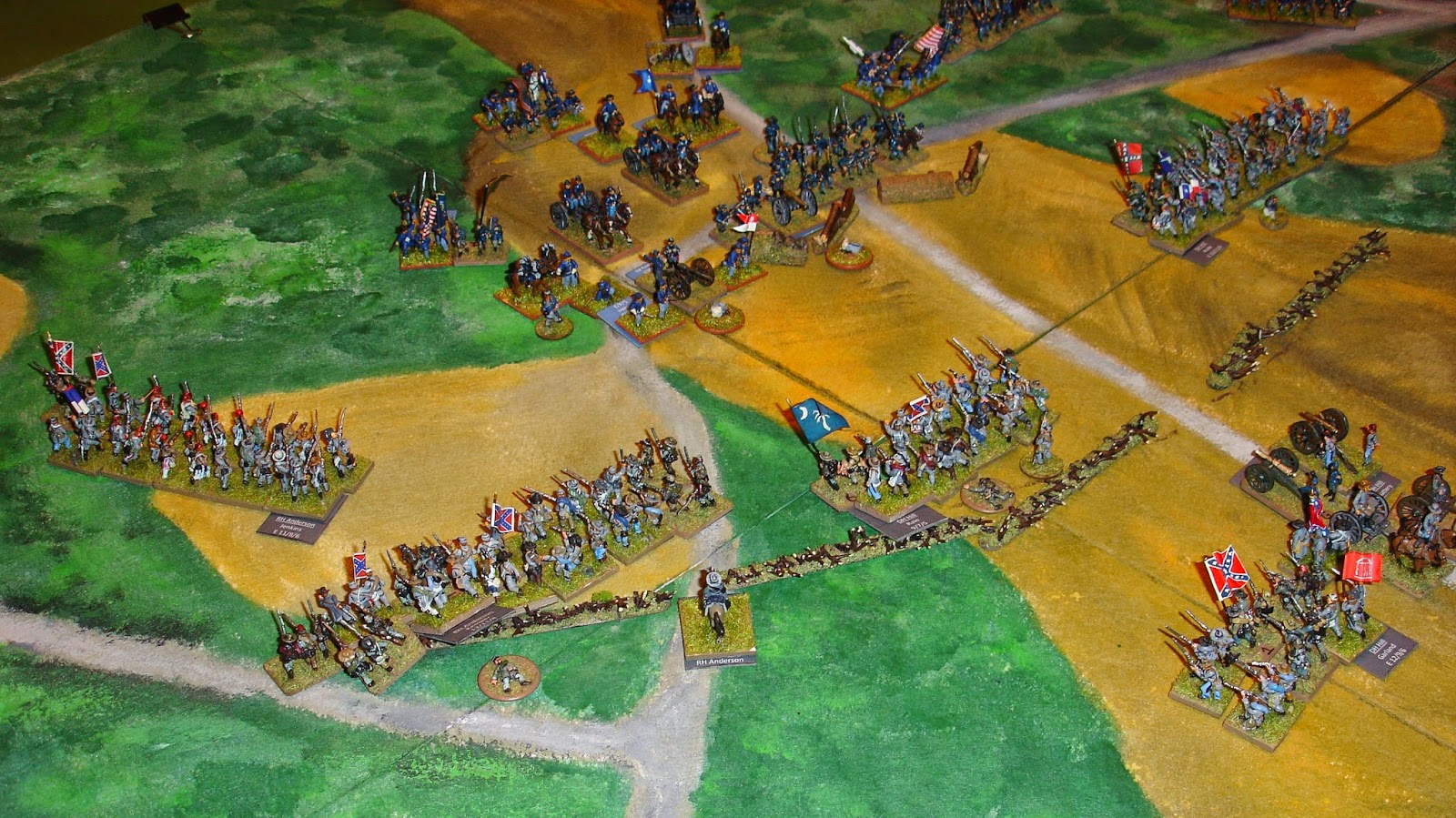 The Confederates bombard the Seven Pine Crossroads redoubt with some success.  It is starting to look very bad for the Union. 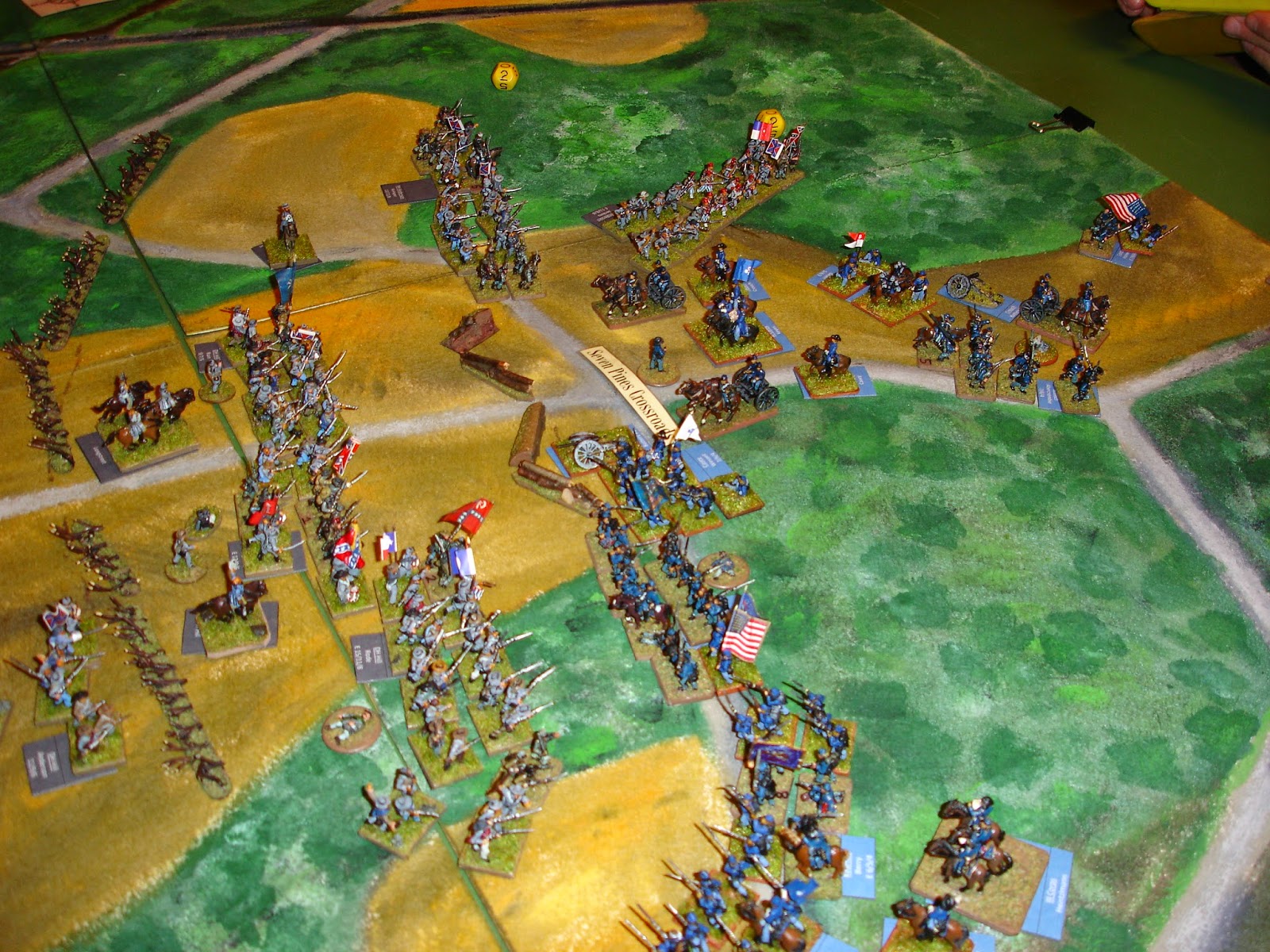 The Confederates start to drive in the Union right flank, which is held only by spent troops facing the fresh troops of Kemper and Jenkins. 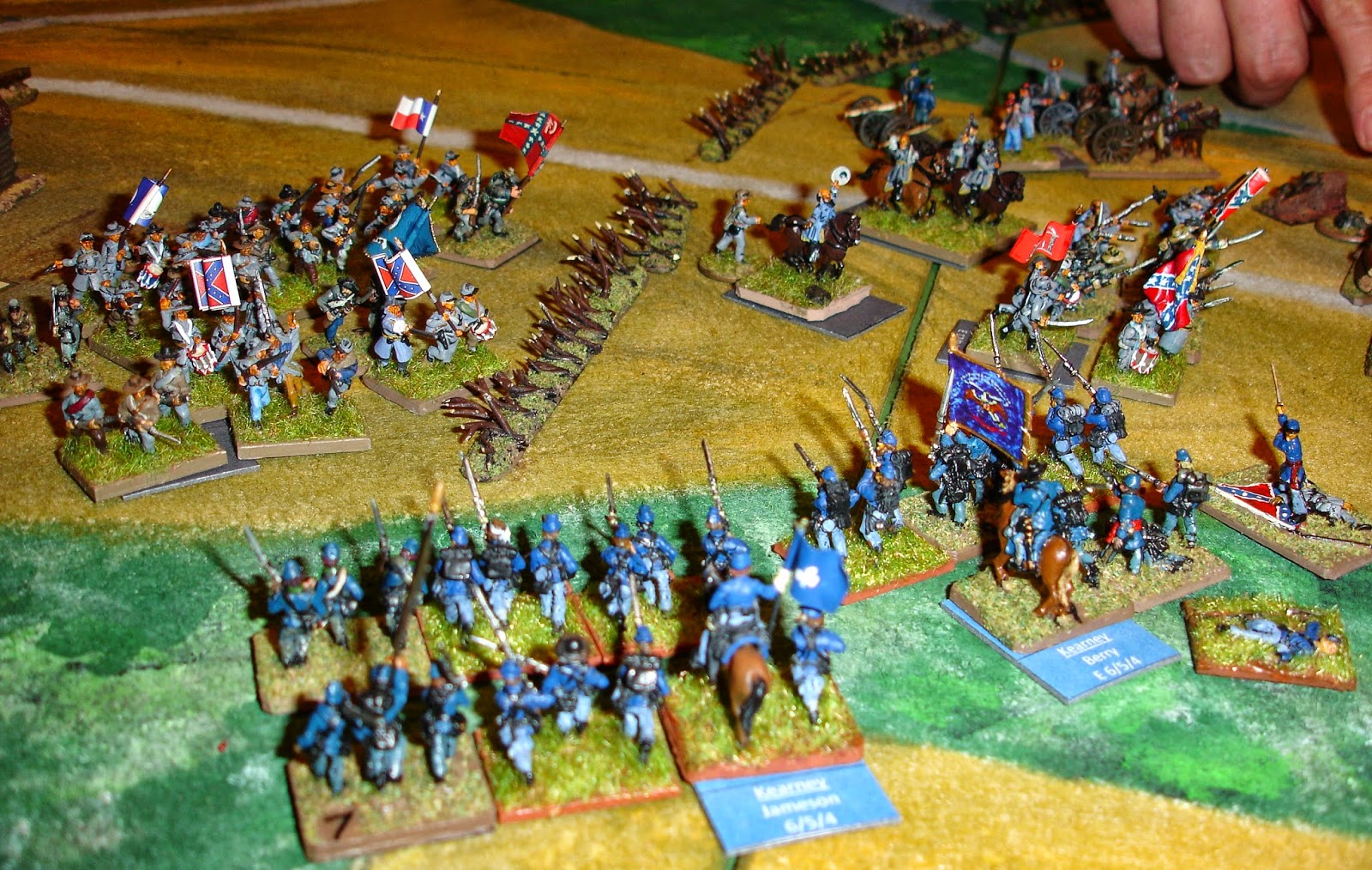 The Union made desperate attacks on the Confederates right trying to retake the Crossroads, but they were driven back and as night fell the Confederates where closing in on the Williamstown Road, cutting off the Union's line of retreat.

Phew, what a battle.  This was meant to be a small scenario, but there was still a lot of figures to move (I always find Fire and Fury games look a bit messy as brigades never seem to dress their lines neatly).  It went well over expected time.  Part of that was the club situation with commanders on both sides being asked to adjudicate on other games being played.  Even though the combat mechanics are very simple, I still found myself double checking the calculations, often finding I'd missed a factor and then only to find it made no difference.

The only thing that seemed funny was when we had a combats between those massive Confederate brigades and lone, limbered or silenced Union batteries.  The batteries were destroyed, but more due to good die rolls than significant factors.  Perhaps it was that the Union artillery was not expertly handled, however they were going to get caught sooner or later.

I thought the game worked well and that seemed to be the case for the players as well.  Umpiring is interesting, but it allows for a smoother game (determining which stands are in arc for example) and also provided a decent dose of fog of war.  Not sure I would try it on a club night again.