Wings of the Albatross

For my fourth game of Wings of Glory, and my third at the NWS using Stephen's collection of planes and accessories including the very impressive playing mats, I was in charge of a pair of Albatross fighters.  Scarily one was without a pilot (first series plane). 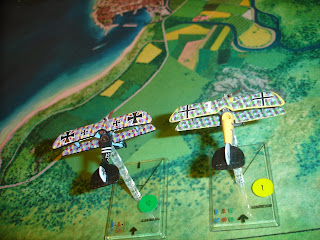 Our mission was to stop the return of two bombers and their escorts.  We had six to their four, but those bombers with their rear gunners are murder to engage. 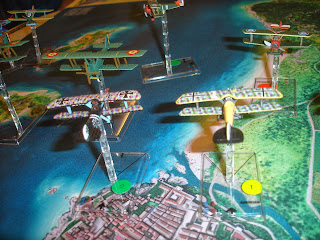 The bombers escaped, taking down one of our planes and leaving another in flames.  Both my fighters got shot up but managed to break off and head for home.

A very visually appealing game and easy and fun to play.  Our game had three players a side and handling two planes is just about the safe limit, especially in the new licensed premises the NWS now enjoy.

Wings of Glory added to Xmas wish list!
Posted by Sun of York at 8:48 AM