Yesterday my Burgundian Ordannce army, all 600 points of it, finally got to take the field in what I am pretty sure was its first battle. I started building the army back in the late 1980s using Tin Soldier figures, basing it for WRG 7th Edition, the aim being to have an army very different to my Hellenistic troops. 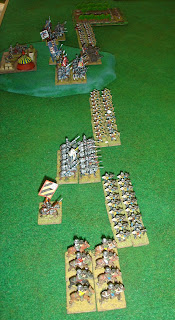 My army from the right. 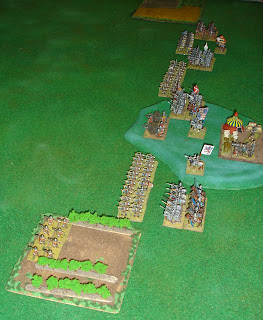 My army from the left.  It had already claimed the vineyard for Burgundy. 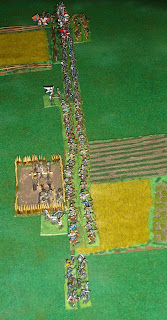 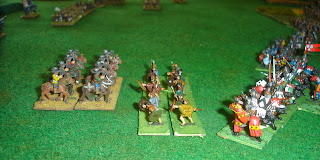 After a bit of a slow start - Charles the Indecisive here, and the English were mostly on foot - action commenced on the right with my Mounted Crossbowmen (who couldn't hit a thing) facing off some Irish scum backed up by superior Gascon knights.  The knights charged, bursting through the Irish and my troops evaded. 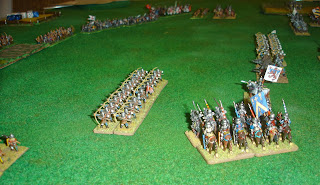 On my left, after a rather rapid advance with the handgunners and longbowmen, I decided to switch the Men-at-Arms over to the centre.  If only my artillery would get out of the way! 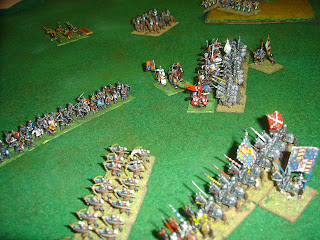 A mighty tussle ensued on the right as knight took on knight.  The mounted crossbowmen came back and with the help of the foot crossbowmen who could shoot, spooked the Irish and set off for the enemy camp. 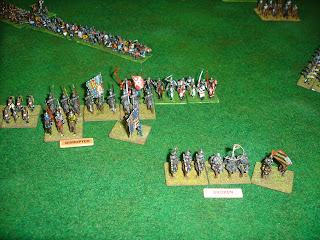 After holding the Gascons to two draws my Men-at-Arms lost a second base (combats were bloody with four or five hits per round) and broke.  But help was at hand and the enemy general had been killed.  The Gascons fought bravely but were done for! 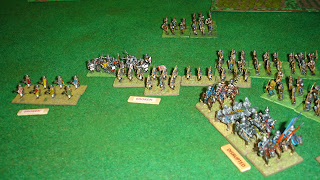 On the left, not so good.  Even though drilled, my troops just couldn't maneuver quick enough to get out of the way and ultimately paid the price. 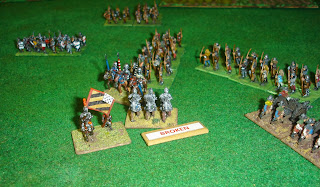 My knights, while attempting to redeploy got hit in the rear and quickly collapsed.  All that was left of that flank was the artillery.  I was pretty happy to get it into action, but it performed poorly and was really too much trouble to have in the army. 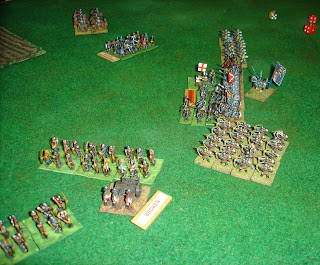 But the game was very close.  My remaining knights were doing really well against the dismounted English and it was a close run thing to see who would break first - them or my artillery.  It was that close, but it was not to be.  Artillery lost a base and kaput! 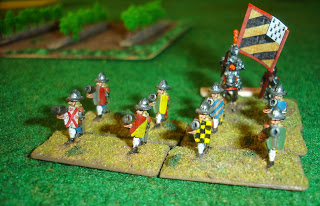 I could still go another turn if, on what was their third attempt, these buggers would rally, but they had had enough.  He who runs away gets to drink another day.  They had stripped the vines bare and were claiming victory.

A very exciting game using Field of Glory 2.0.  I still have a lot to learn.  The rules worked well although we did have some funny burst through situations, one of which resolved itself very much in my favour by positioning my troops back were I wanted them after trying to get them to contract three times and failing the test each time.