It has been three years since my last DBA game with Kriegspielers back in Canberra and as I've signed up for the DBA competition at Cancon next year I needed to get in some practice.  Mark very graciously agreed to have a game and demonstrated I was very much in need of practice.

I had studied up on WADBAG's DBA 2.2+ only to find it is quiet an improvement, eh difference to DBA 2.2 that will be used in Cancon.  Pity.

The first game was fairly close, but the English triumphed after goading my knights to charge their archers. 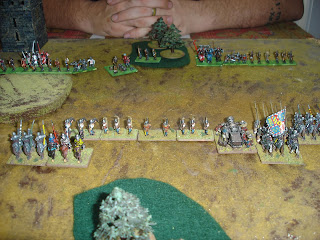 And there was still time for another game - something that has to be admired about DBA, quick, fun, and colourful with plenty of decisions. 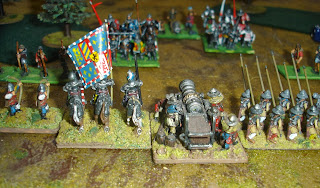 In the next game my bombard knocked back the English and then my general took off, pushing them back, and back and back.  I was up about three elements and then it all went pear shaped.  We were each down three elements and had our generals in the thick of things, outflanked and everything so it was very close.  Sadly my general must have been exhausted as he just couldn't make it.

Great games and I am now really looking forward to the competition in January next year.
Posted by Sun of York at 8:51 AM