One thing leads to another and having played Guns of August I was told that Paths of Glory is highly recommended and before I knew it Richard had procured a copy and we had our first session yesterday.  Richard provided this AAR of our progress so far. 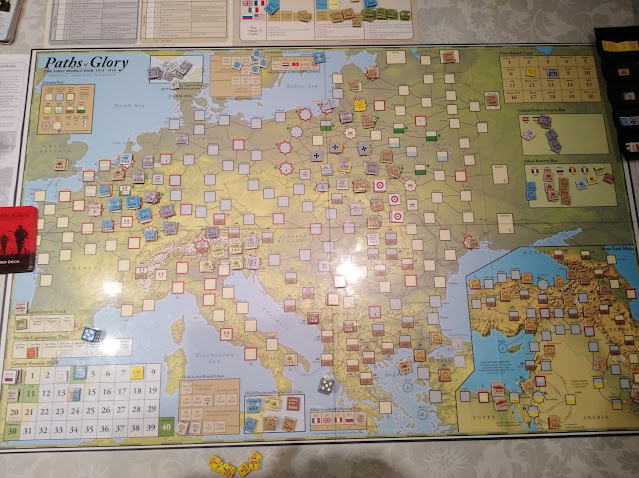 The Germans starting with their obligatory play of Guns of August, smashing the Liege forts and are immediately activated for an attack on Sedan. Electing to take the 66% chance of a successful flank attack on a solitary French army in Sedan, they promptly fail to outflank and are immediately counterattacked by the French who give the Germans a very bloody nose with a loss maximum of 5 losses. The Germans inflict an absorbable 2 points on the French leaving their army unscathed. In an all out Offensive au Outrance the French attack aggressively and inflict further losses on the Germans stalling their assault through Belgium. The BEF conducts a Mons style tactical retreat in the face of a successful German flanking attack on Belgium recouping the loss inflicted on them whilst dishing out more losses on the Germans. At this stage the Schlieffen Plan has fallen apart and the Germans don't even worry about a "race to the sea" unless they are thinking of the Baltic of course, instead, retiring out of the Sedan kill zone to lick their wounds.

Elsewhere the Austro-Hungarians take out their frustrations on the Serbs (and everyone else as they keep rolling the Mandated Offensives) who cannot hold Belgrade in the face of the Austro-Hungarian assault. The Russian front is initially quiet with some minor manoeuvring by both sides as both the CP and AP slog it out in Belgium and France. With a short lull in proceedings on that front, the Russians launch a major offensive into Galicia capturing that province and its VP locations. In the mean time, the Germans have commenced offensive operations against Russia and Lodz and Warsaw fall in quick succession and the Russians suffer a lot of casualties in the face of the advancing Germans. Further German attacks along the Prussian border see the Russians evacuate Kovno and the frontier fortress city with it's fortress now in ruins after heavy fighting is primed for the taking. Further south a German incursion through Brest Litovsk threatens the flank of the considerable Russian forces massed in  Galicia. After a long siege, the fortress of Przemysl falls to the Russians. In the meantime, Italy entered the war and was unable to resist an advance into Trent to besiege that fortress. Their joviality did not last long as a full German army arrived to break the siege just before the siege resolution phase. The weak AH forces can only look on as their pitifully weak frontier forces can only manage an equal exchange of losses after being forced to do yet another mandated offensive. Still the Italians look like they could be brushed aside without too much effort. If only there was a spare army.  (There are none).

In possibly the most controversial move of the day, Marechal du Haughey, henceforth known as "le toxique" not contented with Offensive au Outrance unleashed a phosgene gas attack on some, (suspecting as it turned out) Germans, who quickly donned their gas masks and blunted the attack.

In a further affront to accepted WW1 tactics, other than the initial play of the "Entrench" card which  the Germans played to give themselves are fighting chance and save themselves from a 3 pronged flank attack, has been the one and only trench dug in the game so far. The Germans seem to have dropped most of their shovels in the fall back through Belgium, and the aggressive British and French attackers have so far spurned digging, preferring a campaign of manoeuvre.

The French army's successes in blunting the Germans has come at a very high price with the corps reserves being run down to a bare minimum. Any more than a couple of big losses in the next few turns could see significant changes in the front line. The Germans are in a slightly more advantageous position, but having to fight so many simultaneous brush fires are also stretched. The Russian steamroller is gearing up, which way will it turn -to the North to save the VP locations or east to fight another day or emulate the French and try to break the AH Carpathian mountain defensive line.

Meanwhile in sunny Egypt the Turks and British glare at each other across the Sinai peninsula in a mostly forgotten near east. The Turks thought better of a mandated offensive and the British have their MEF unit poised for something in the Aegean just off the Gallipoli peninsula. A wait and see and wait some more approach by both sides.

Horrendous losses on both sides, teetering near the collapse point and its only just coming up to 1916. Which side has more blood to give?