Partisans tie down Soviet forces that might be better off on, or rather near, the western border with the Axis powers who might be planning to declare war.

But wait, the US has just declared war on Germany and Italy.

AUSGAME 2020 1942 M/A - TOTAL WAR
Another abbreviated summary of last week’s session:
Notable events M/A 42:
• Axis had won the M/A initiative roll, with likely bad weather in the Artic they hand it to the Allies, securing the Axis +1 Axis initiative for M/J Op Barbarossa.
• Weather roll 1st impulse 2 (+ 2) 4 Weather mostly Snow, storm and rain – fine NM.
• US first impulse DOW roll last week v GERM was 9 – no war.
• Allied first impulse; CW and US Naval, Russia/China land.
• US sail subs and ca’s into the South China Sea and Sea of Japan.
• US CAs find and sink Jap 3 x conv in South China Sea – Japan now down to 9 Convs.
• US CA and Jap CA’s engage in gun duel in Sea of Japan – CA’s damaged on both sides.
• No land actions by China, Russia in Snow pulls back from the front line and resets.
• GERM comb finds and Xs 2 x CP off the Canadian Coast,
• GERM Nav air roll 3 in the N Sea, find and D the brand-new BS HMS Howe – saved an X almost a first for the Royal Navy, British acft abort due to failed morale roll.
• Italy Comb - lands GERM units in N Africa.
• Jap Comb – reinforces with air Hong Kong and fleets, CV’s max out air groups.
• Allied 2nd Impulse weather 9 - clear everywhere.
• US DOW Rolled 5, success USA at War with GERM and Italy - needed a 7.
• Mexico joins the fight - aligned by the US.
• US and CW Comb, Russia and China Land.
• US TF57 sail into the South China Sea, search roll a 10!
• US TF57 sprung by a lone Jap CA Myoko, with a 3 -10 split she torpedoes the CV Saratoga which fails it’s D result and returned to the US for repairs.
• JAP Nav air elects not to abort but is found on the 2nd round and shot down – pilot survives.
• US G/Strike Hong Kong acft and lose a CVP to a bounce result.
• US Divs with TF57 Invade Sawing Kla (Siam) overrunning a CA and Amph and Hainan.
• Overrun CA and Amph – escape as TF57 caught napping.
• Russia, after 6 months of preparation finally destroys the 2 factor (4 in the Mtn) Partisan in the oil city of Bandar Shahpur rolling a 19! The oil lines to Iran and Iraq are now free to ship oil to Russia.
• Chinese Nationalist and Communist launch a spring offensive destroying 2 Jap Corps and a valuable ART unit for single losses.
• Nationalist +4 attack, rolled 16 for a 2/1 – Japan not happy.
• Axis 2nd impulse – Jap Comb, Italian Naval, GERM land.
• Japan aligns Madagascar.
• Jap Strike and Advance TFs sail into the South China Sea - search for the US – neither find as both roll 10’s! Funny War at sea.
• Japan abandon Nanning in S China rather than be cut off by advancing Nationalists.
• EOT Rolled by the Axis – 2 impulses each.
• PART roll 10 – nil China again – fourth failed Chinese Partisans in a row – ‘hearts and minds’.
• Rebase, prod and reinforcement next session.
Summary.
A marginal session – none were happy except GERM. The Axis did not get the initiative shift as they had hoped for as Japan rolled EOT. GERM and Italy were somewhat pleased as the Russian units slated for redeployment from Iranian anti-Partisan duties and Manchuria did not move due to the EOT, this includes ALL the Soviet bombing fleet – 5 acft remain in the vicinity of Iran and two HQs (Konev and Vatutin) won’t be on the front line for the Barbarossa invasion, unable to reinvert 7 Res – this could be significant. GERM/ITAL losses for this turn were nil – despite attempts by the Allies to attrition SCS/acft in both the W Med and N Sea, the UBoats sank 2 Conv for no loss. Japan, however, has had her Convs cut again meaning her build will be reduced to only 6 x 1.25 for 8 BPs, luckily again no Chinese Parts saves several resources being occupied. She had some luck in the South China Sea when her CA Myoko had a 3 – 10 split against the US TF 57 and damaged the CV Saratoga at a critical time, her overrun CA and Amph in Siam escaped being found by TF 57 and one of Yorktown’s Air Group was shot down whilst on a GS mission – the US has lost 3 x CVP this turn and with only 4 CVs and 3 British CVs to the Japs 9, the US may well have to be more cautious for the next turn or two until the repaired Saratoga returns and the ‘Red’ Essex CVs start to arrive.
For the Allies the EOT was more than inconvenient for the Russian. He needed one more impulse to rail the two HQs to the Germ front – this might prove costly if it is a clear weather long turn. The 5 Land bombers less so, but these will take valuable air moves to rebase to the front – at least in Iran they cannot be ground struck on the surprise impulse. The CW missed out in replacing/reinforcing convs and will have to spend valuable UK stored oil to max production. The good news story for the Allies is that the USA’s third attempt to DOW v GERM was successful and so she can now aid in conv protection and offensive ops v GERM – not to mention total War and an increased production.
Next session GERM Operation 1942 Barbarossa will almost certainly be declared – the weather roll will be critical to both sides – GERM praying for a long clear weather turn and Russia a bad weather short turn – time and the dice Gods will reveal the fate of GERM and Russia in the next couple of sessions – an interesting game but a tough one for the Japanese. 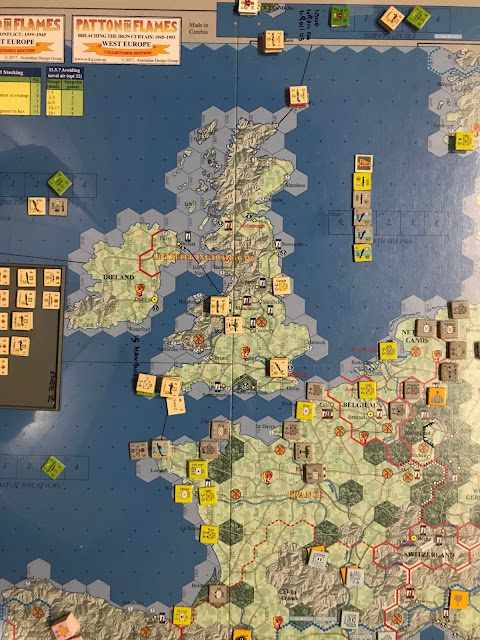 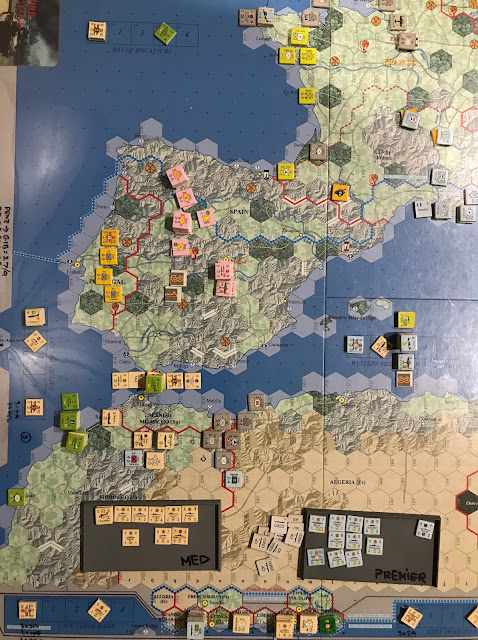 The Air battle for the W Med as the US joins the fray and the C/Wealth breaths a huge sigh of relief. 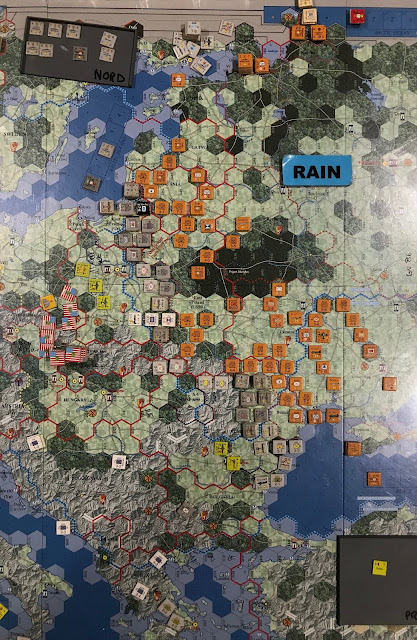 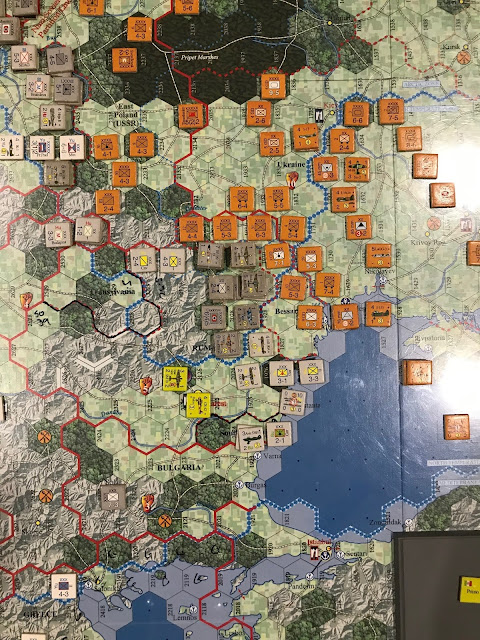 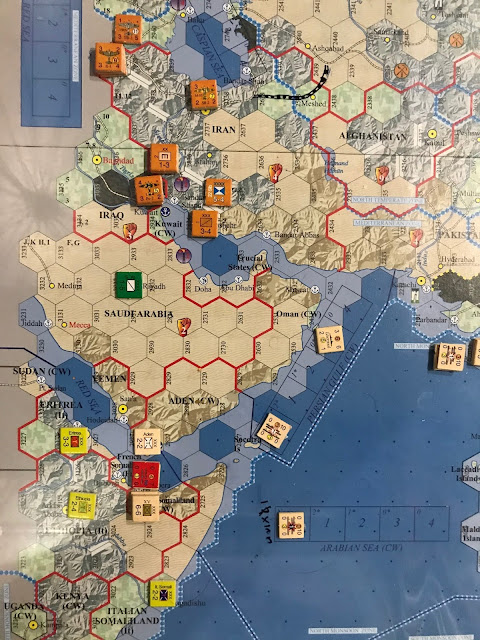 The Russians celebrate the destruction of the Iranian Partisan with a roll of 19! Vodka all round 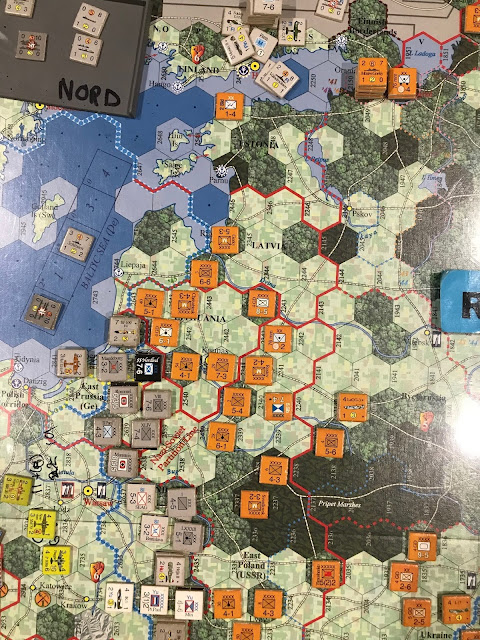 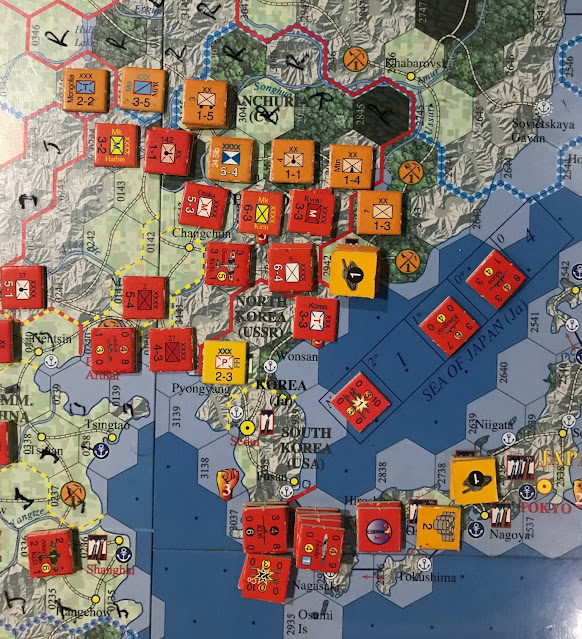 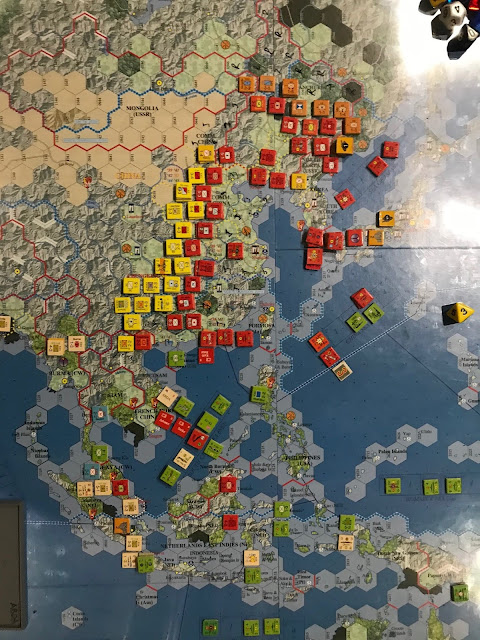 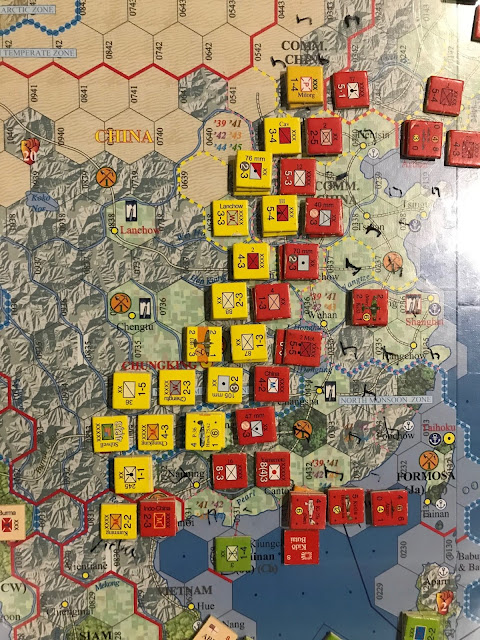 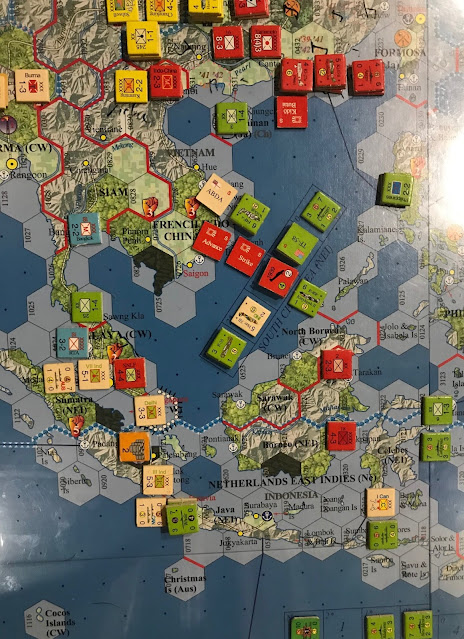 The Sea China Sea - contested by both Allies and Axis - first round goes to the Japanese. 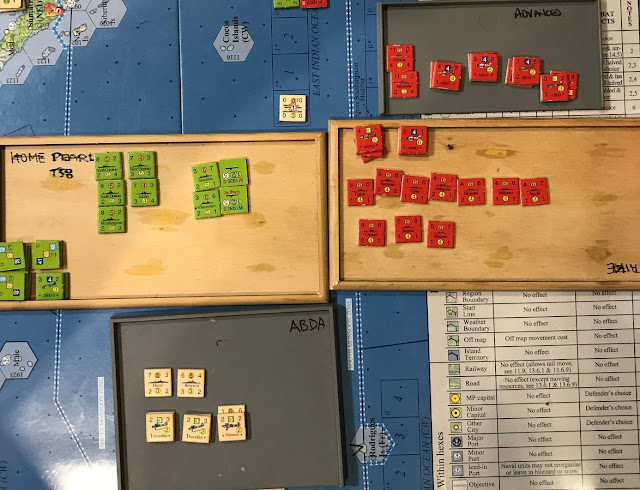 The first clash of the two Pacific fleets both rolled a 10! 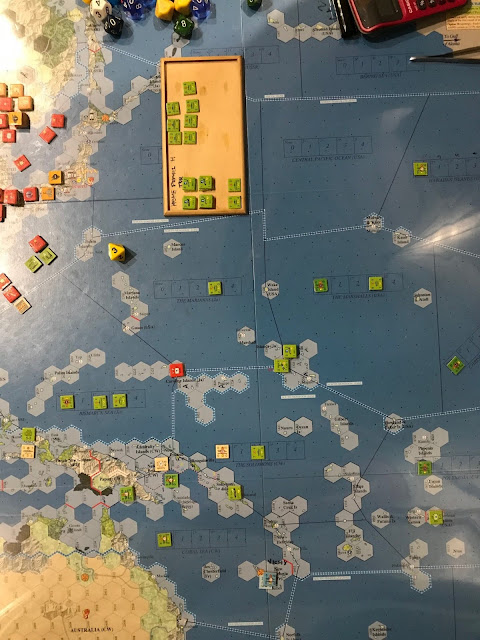 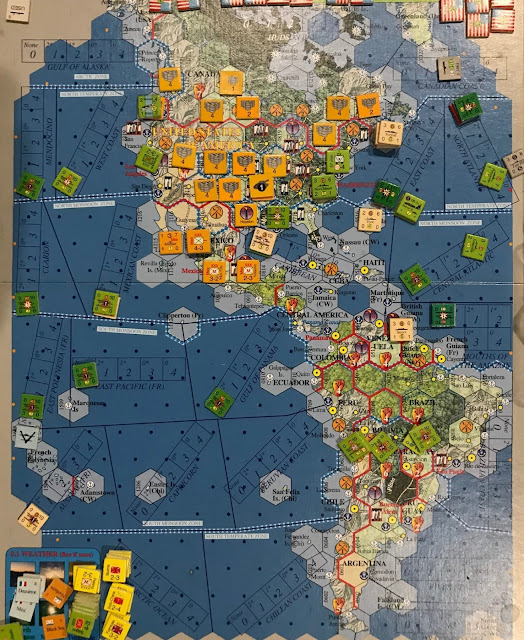 Total War as America steps up production and aligns Mexico 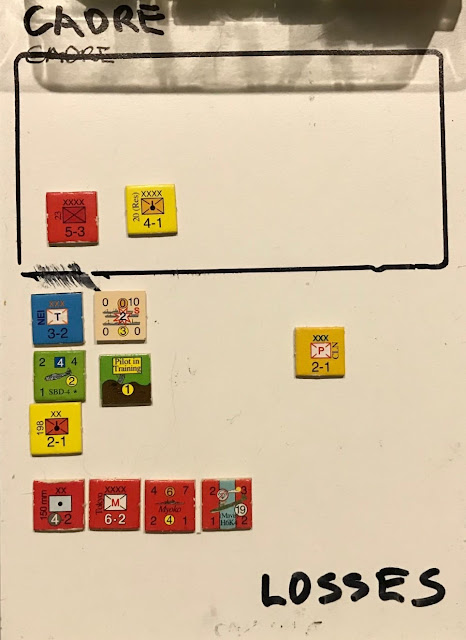 Losses predominantly Japanese - no Italian or German losses though.