AUSGAME 2020 1942 J/F EOT
Another abbreviated summary of last week’s session:
Notable events J/F 42:
• Weather remains bad - Blizzard and storms on most areas.
• Allied first impulse; CW Comb and US Naval and Russia/China land.
• CW search rolls fail in the W Med and N Sea but both GERM and Italy roll 1’s – 2 x CW CAs sunk as they fail save rolls – no loss to the Axis.
• CW land units advance East to secure the Moroccan mountains.
• US Marines land in Casablanca and Acft in the UK.
• US shipping arrive (Dynamic move) into the Philippines and NEIs minor ports.
• The Jap Fleet (Strike) w 2 x CVs find the lone CW CA in the Bay of Bengal and sink it.
• The US Task Force 57 sails against the ‘Strike’ in the Bay of Bengal but both fail to find – in what would have been the first US/Jap fleet action.
• US CA’s find the Jap Conv in the China sea and D x 3 as the escorting Jap CA saves both an X and a D, much to the chagrin of the CW.
• Allied 2nd Imp the GERM Raider Atlantis found and sunk by HMS repulse.
• EOT Roll by the Allies – turn ends 2 x impulses each.
• PART roll 8 – no China again, lucky for the Japanese as there was no garrison in Canton.
• GERM continue to build O Points in prep for the Russian offensive.
• Italy build Convs as they are critically low with only 4 left.
• Russian doubled their build – invested in 5 O-Points so Zhukov can be reinverted.
Notable events M/A 42:
• Axis win the 1942 M/A initiative roll but with the bad weather in the Arctic they gift it to the Allies, that way they guarantee their initiative of +1 Axis is retained for next turns Barbarossa. Allies start M/A.
• GERM can break the pact now as the GV is halved – estimated at GERM v Russia.
• Weather is 2 + 2 - poor weather – good decision by the Axis, to give it away.
• US DOW roll v GERM – 9! (an 8 last impulse) – No total war - chit lost from GERM/ITAL tension and pool.
Summary.
Another marginally positive session for the Axis, as the EOT roll by the Allies did not shift the initiative down as the Allies had hoped, no European war with the US. Two impulses each this turn, and poor weather meant little activity. The CW Navy continues to be plagued by multiple 1’s by Axis search rolls, that is certainly not to say they have not had their wins – the Italian subs will testify to that, but on the whole, these has been due to attrition rolls – similar search rolls from both sides. In contrast the Axis have rolled multiple 1’s and 2’s in splits against the Royal Navy, topped off by ‘fails to save’ which have increased SCS losses. By way of example, this impulse the Italian rolled a 1 in the W med and X a CA – it failed its save, the GERM rolled a 1 and X on a CA in the North Sea – it failed its save, and in the Bay of Bengal Japan rolled a 1 and x a CA - it again failed its save – 3 axis 1’s! In Contrast the Japanese CA which was found by US split saved both its X and subsequent D rolls – the Brit was spewing. The Conv war of attrition continued as both CW Conv and Axis Subs were lost or damaged – the loss of the Raider Atlantis was a huge relief for the CW.
In the Pacific war, Japan continues to be on the back foot as Rabaul, Batavia, Manila, Singapore and Kwajalein still remain in Allied hands. Worse the US fleet has now rebased into Batavia forcing the NEI MIL to disband itself as they do not cooperate with the US. The only good news for the Japs is Russia has ceased its land war as it rails units to the Russian front.
In Europe the build-up of Acft and land units in N Africa has begun. Two failed US DOW vs GERM with an 8 and 9 means lost chits in the tension and entry pools and a relieved GERM. Game wise it helps the Axis, although Japan is bearing the brunt of the US attention and activity as there are no demands for land actions in Europe. Russia’s main effort is to pull back from the GERM front line ‘en masse’ just leaving ‘road blocks’ to impose delay – the snow roll this turn will help it to reorganise its defensive line. With rain in the Med the destruction of the 2 factor (4 in the Mtn) Partisan in the oil city of Bandar Shahpur is put on hold – if it is not fine next impulse the attack will be aborted and the Russian units sent to the Russian front, in what has been an abortive campaign for the Russians.
Next session Allied first impulse, Russia and China land, CW and the US Naval – possibly the first big naval clash between Japan and the US in the South China Sea. 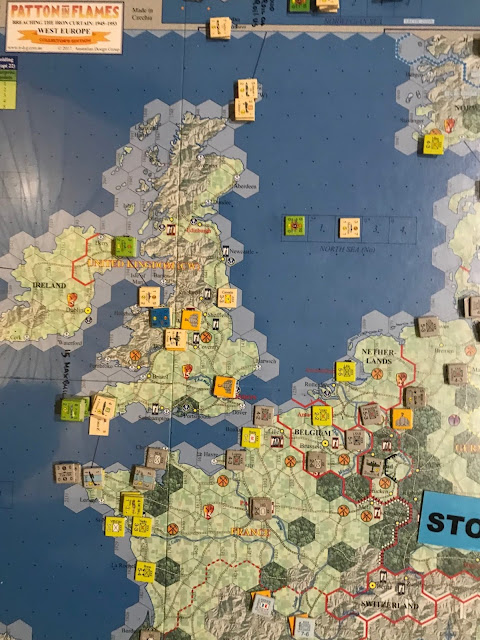 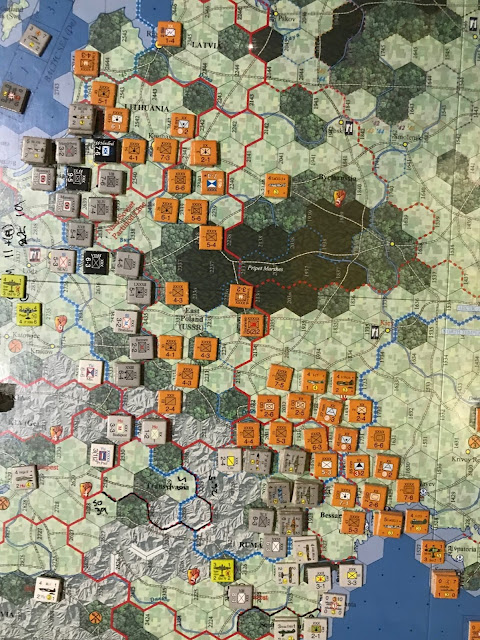 Russian front - with snow the Russian is about to "run away" - Monty Python fans will understand the ref. 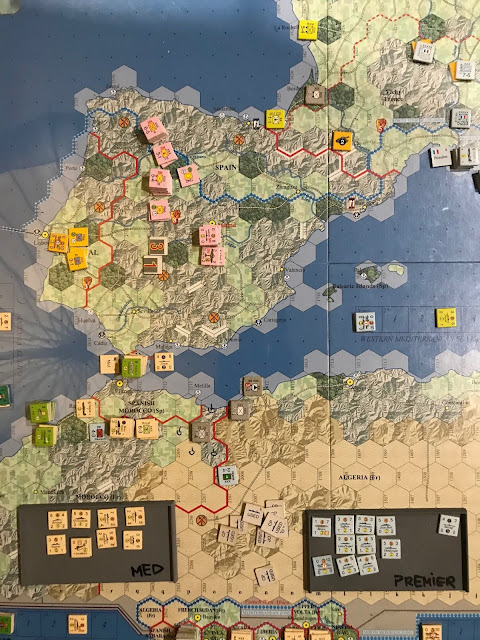 Western Med - the US have started landing land and acft units. Just waiting for congress to get into the war. 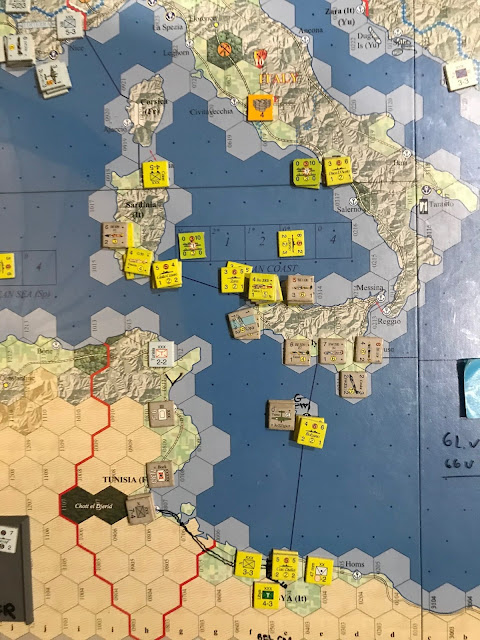 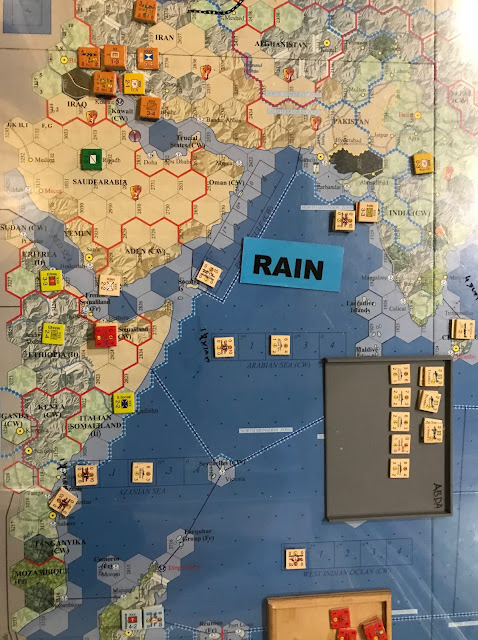 Waiting for fine weather for the Allies to act. 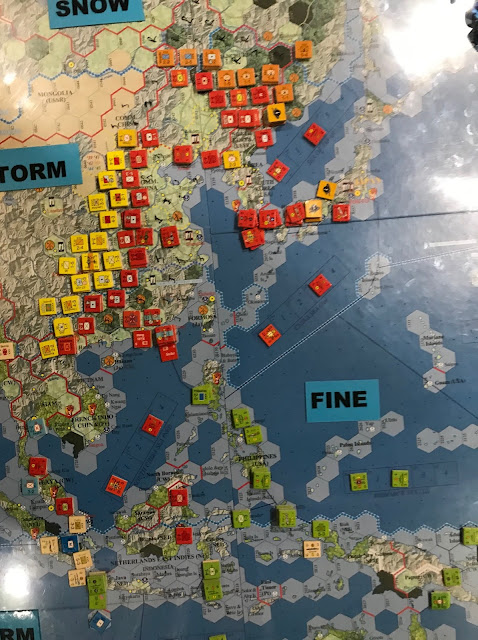 The Far East - Japan under a lot of pressure - reduced builds and a threatening US. 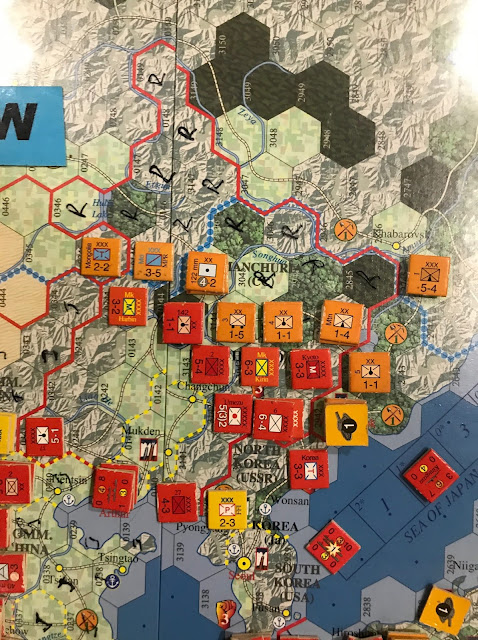 Russian units and acft withdrawn to the Russian front. 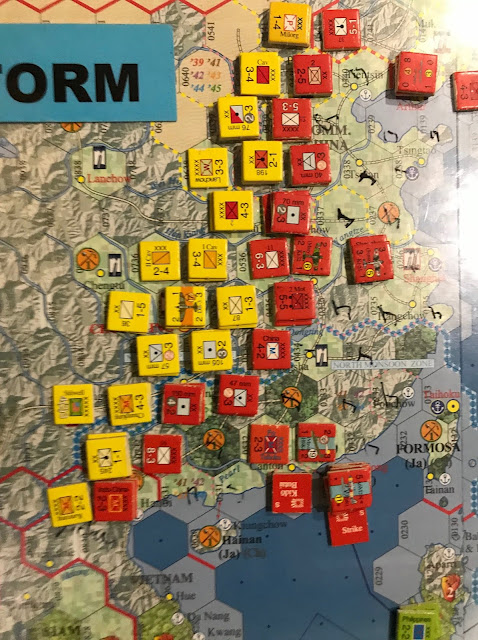 No Chinese Partisans - always a blessing for the Japanese 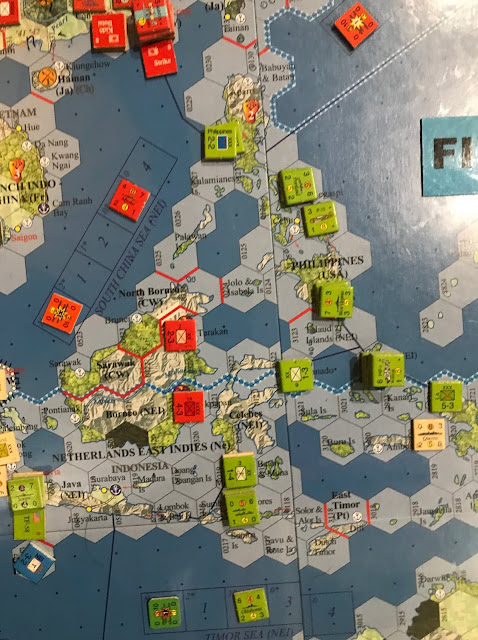 The US Fleet arrives in the Philippines and NEI 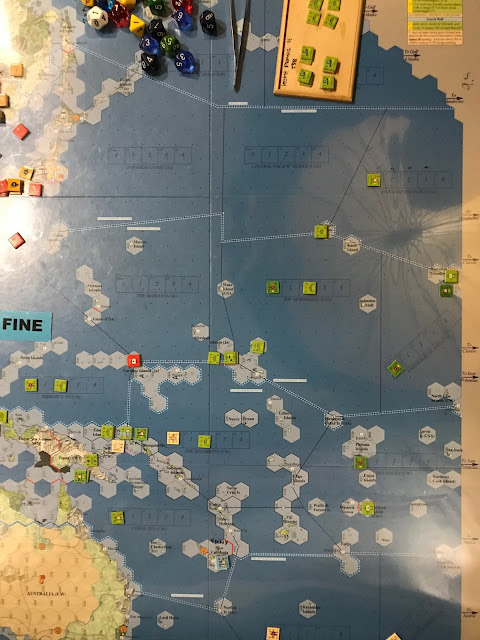