In these times of reduced gatherings, a near neighbour suggested potentially playing a boardgame.  This would be after Easter.  He mentioned a few games, but I knew he had Ukraine'43 and said I'd be keen to play that.  That was agreed and we promptly prepared.  I read the rules (available online at GMT's website) to make sure I was up to speed with the slight variances that GMT have between their WW2 operational boardgames.

I knew my opponent wasn't as familiar with the system as I was.  What I wasn't prepared for was that the copy, in fact two copies, of the game he had was the First Edition!

So it was a strange learning exercise for both of us.  So much so that it took the whole day to complete set up and play the first turn (understandable as this is the most involved turn of the game, and my opponent was going Soviet while I went Axis). 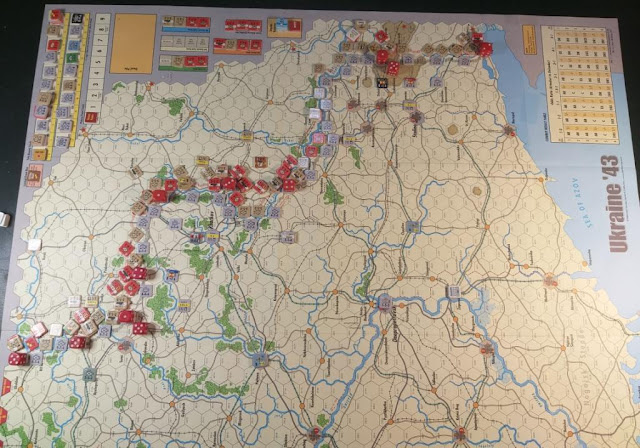 The dice indicate the odds ratio of the attacks.
5 to 1 is the highest on the table.  1.5 to 1 is also on the chart (and represented by two dice).
Nine attacks in all.
The Soviets averaged about 2 on their die rolls and while breaking the line, took a lot of casualties. 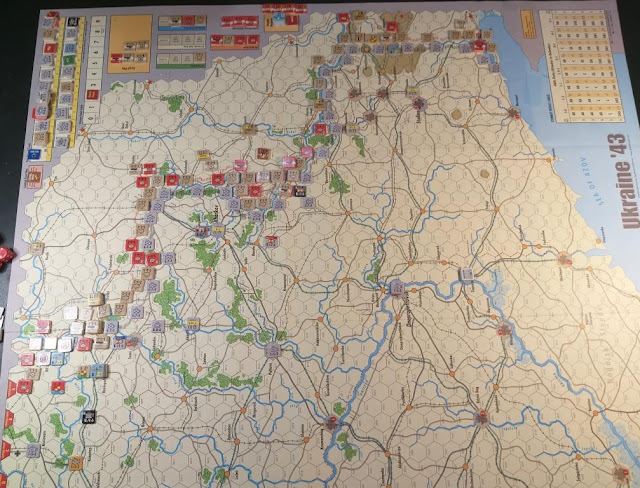 The SS Pz Corps repaired the centre break
with multiple attacks until it had used up all its Tiger tanks.
On its first attack it I threw a double six in stark constrast to the Soviet die rolls.
48th Pz Corps has started to work on sealing the more dangerous break through in the north
(bottom left hand corner)

Very enjoyable, but challenging.  No determined defense.  No tactical movement. More options for the use of air power.  Different terrain combat effects. Secondary combat dice to determine additional casualties in big battles.
Posted by Sun of York at 6:15 PM