This was something of a return match after I had handled the Romans so badly against the Carthaginians in our previous game of Field of Glory.  This time the Romans were up against the Later Carthaginians, or as we liked to think, the soon to be Late Carthaginians.  To be precise 800 points of them from Hannibal's time in Italy, meaning I was facing seasoned, armoured and drilled opponents. 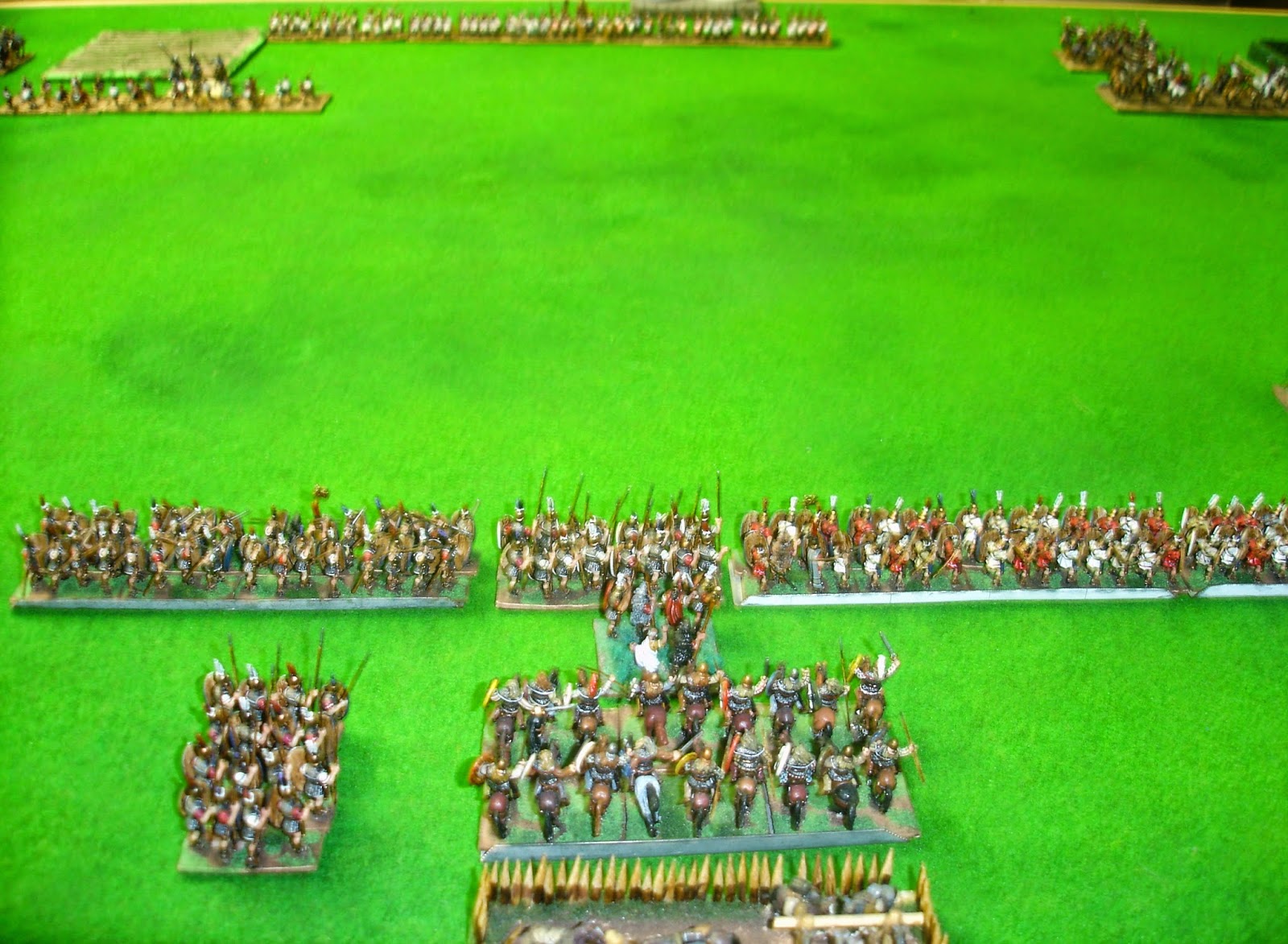 The view from the Roman camp. 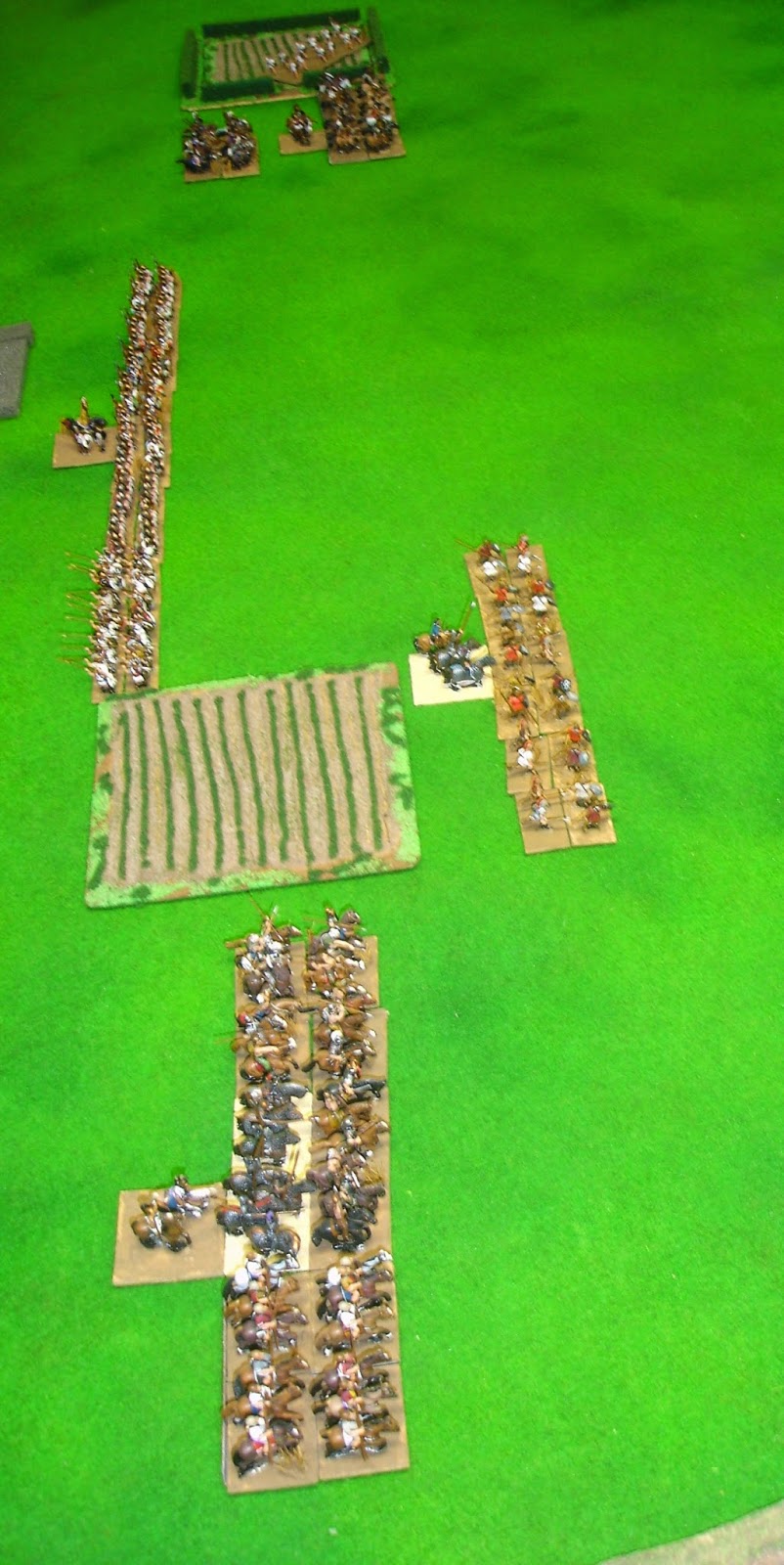 The Carthaginians.  They out number the Romans four to one in cavalry. 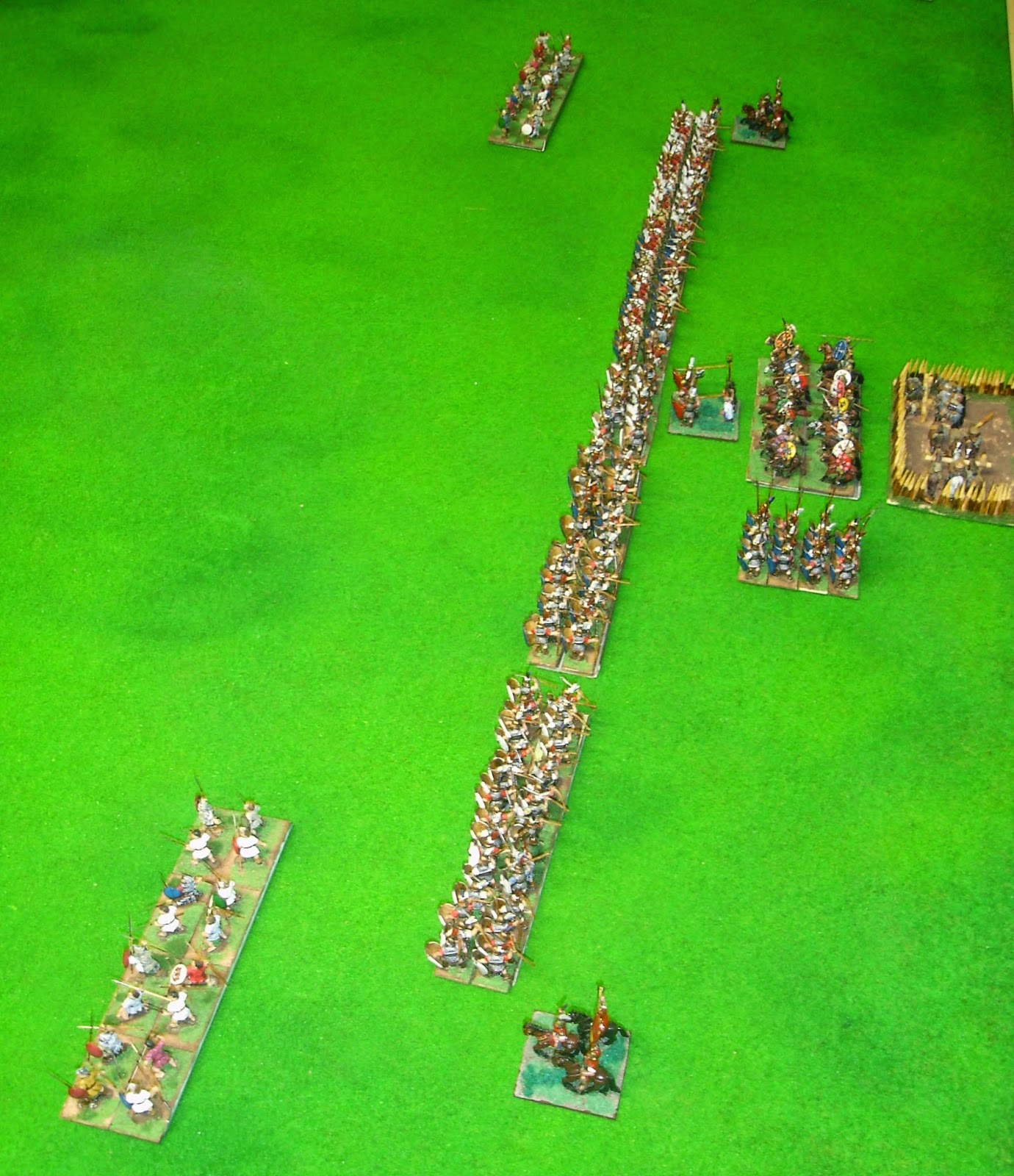 I have my velites advanced on each flank.  There is no cover for them.  The veteran legions make up my centre and the Gallic cavalry and two units of Triarii are held in reserve in the centre. 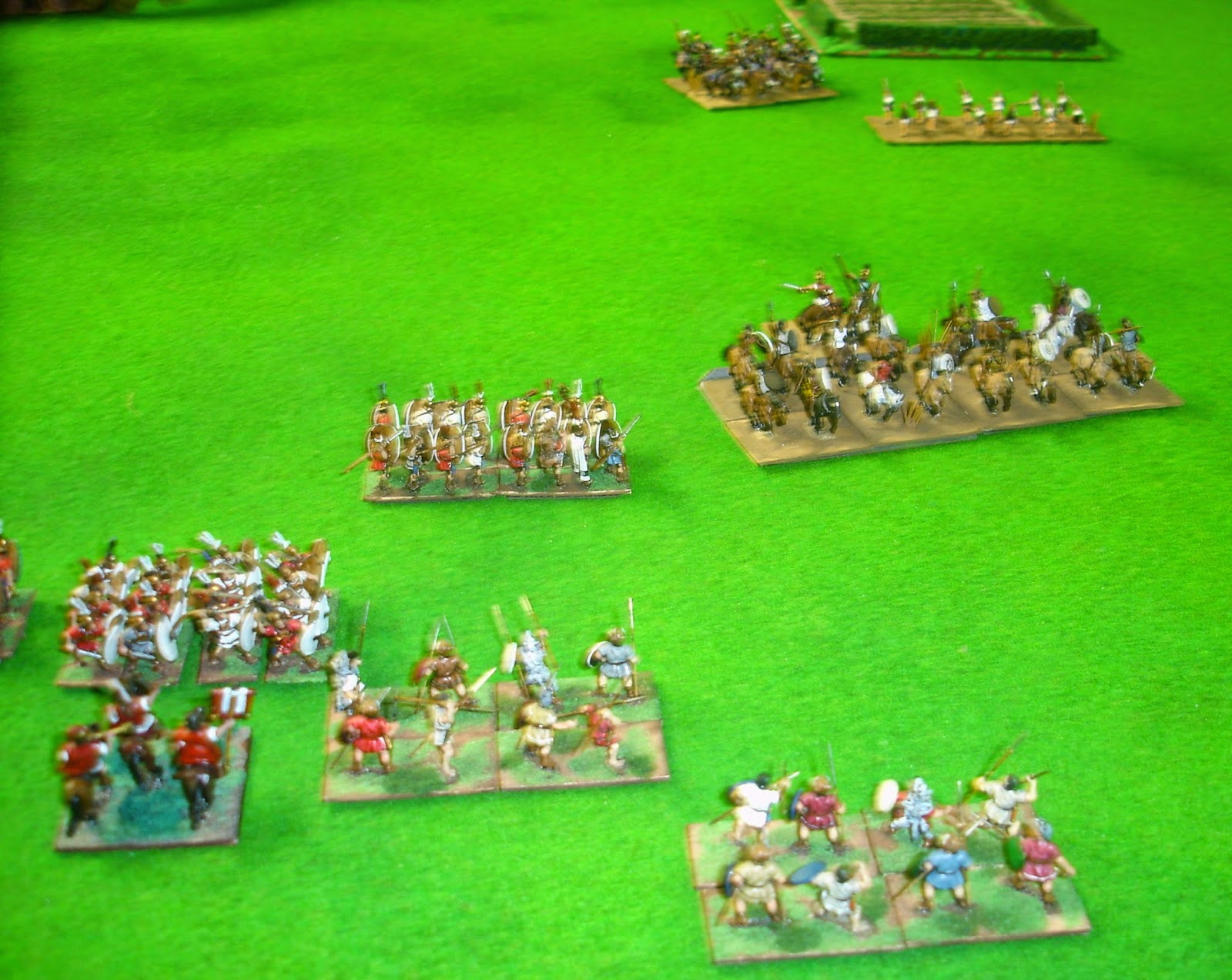 Action opens on my right as the Numidian light cavalry advance on my velites who sensibly pull back. 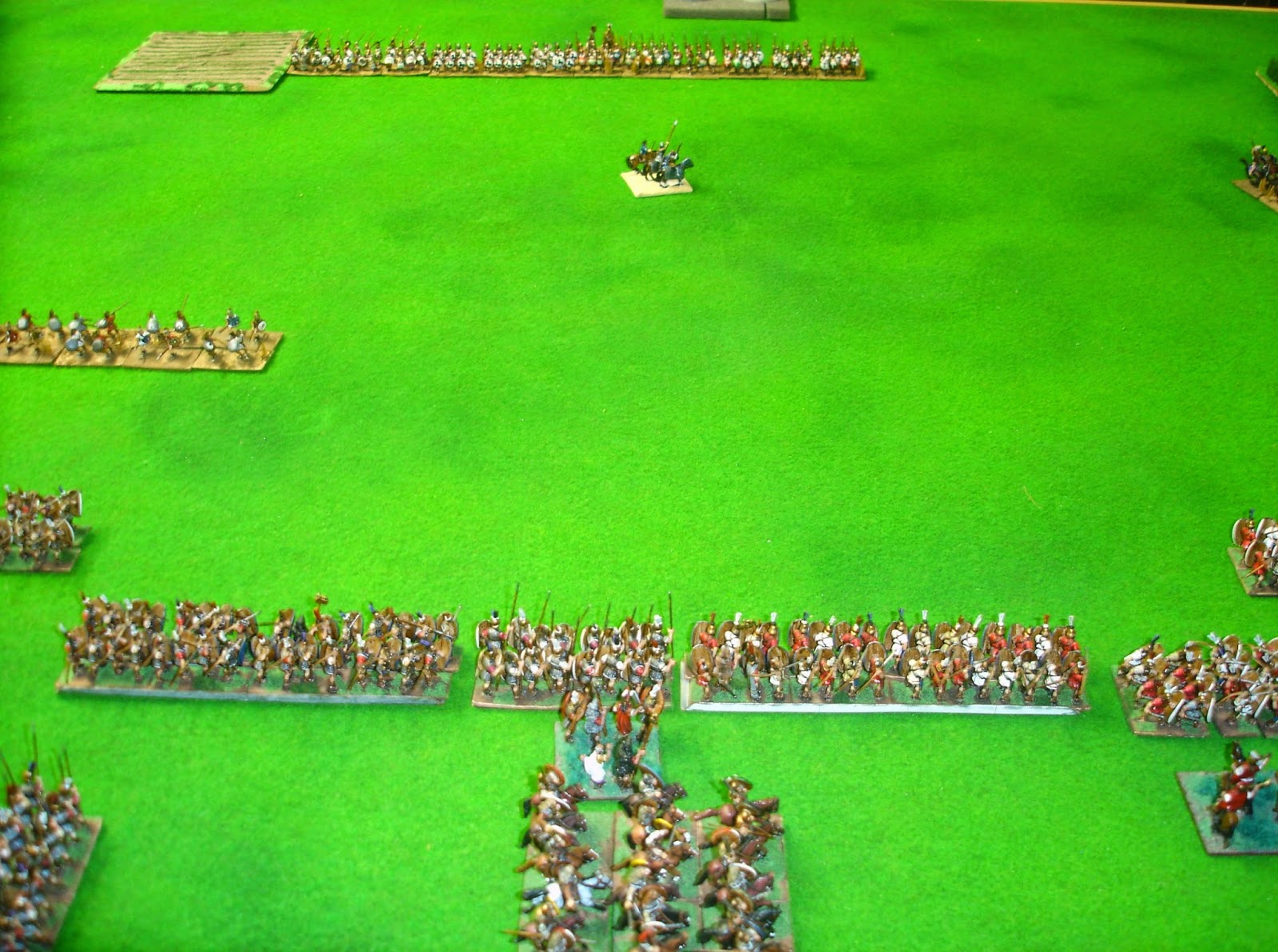 I dispatch my cavalry to support my left.  One of the Carthaginian generals streaks across the field.  What's he up to? 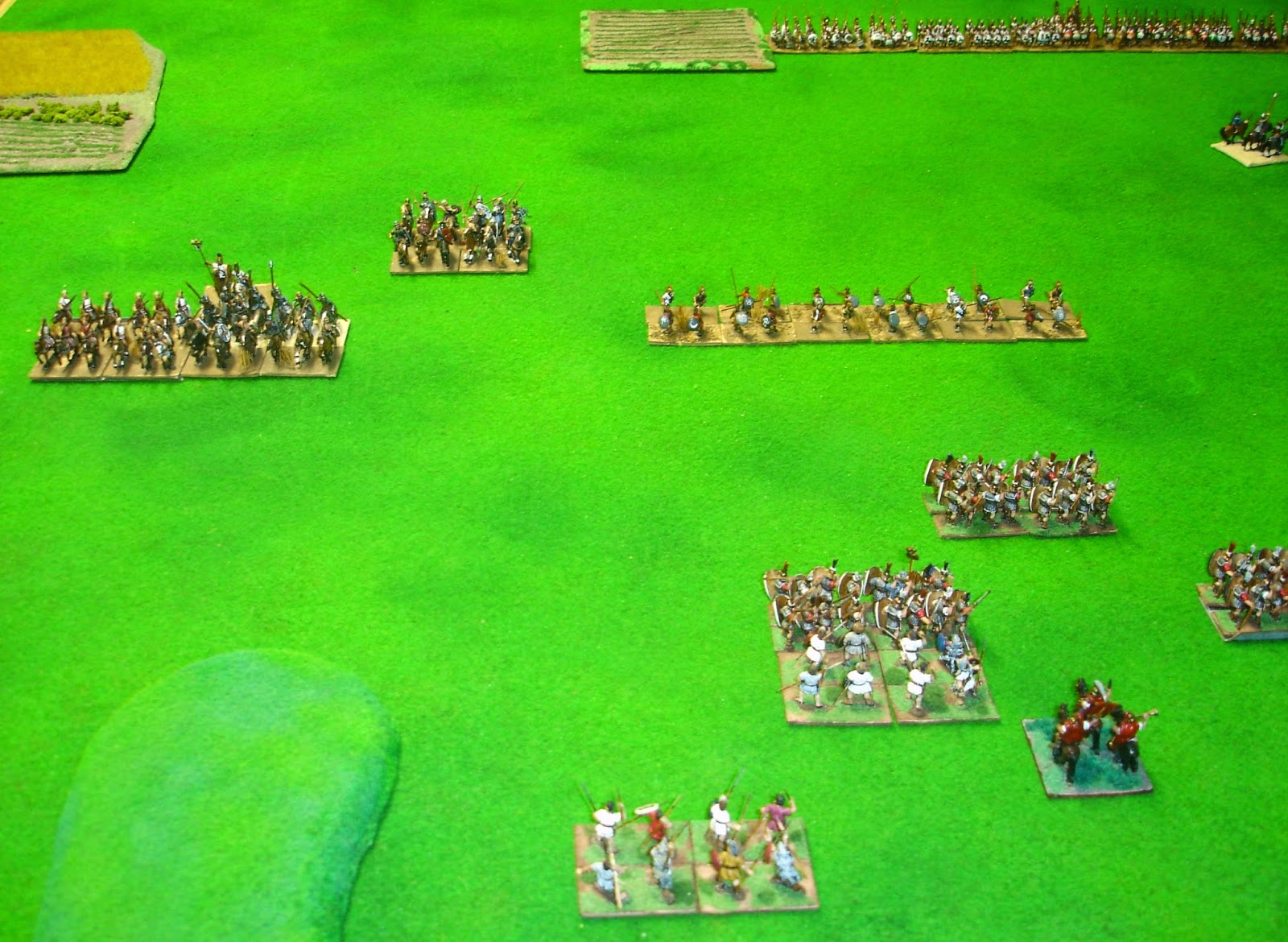 On my left I pull back my velites as quickly as I can.  The Triarii have been sent to support this flank.  The Carthaginian centre hasn't moved, but then neither has mine. 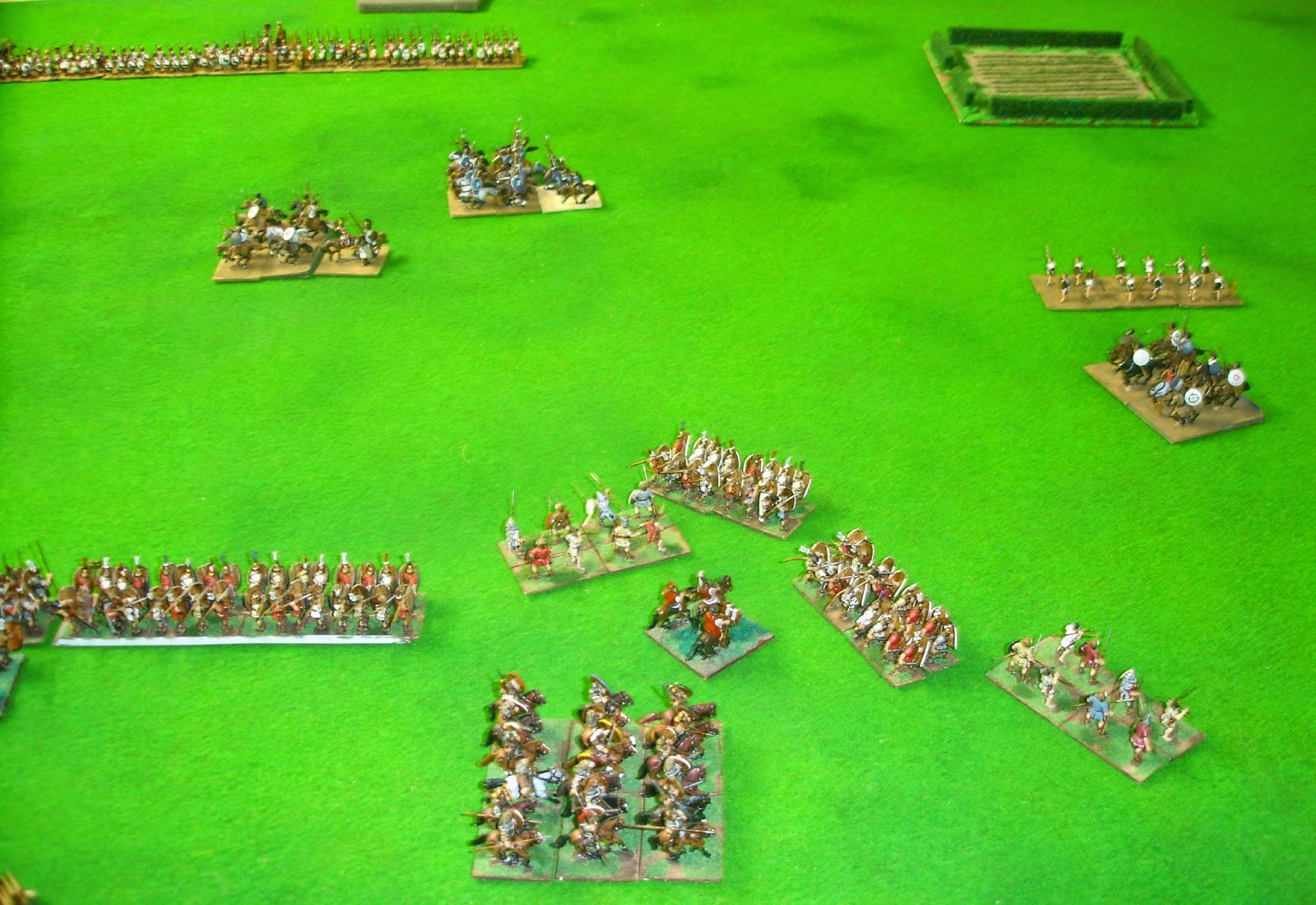 The Carthaginians withdraw two units of cavalry from their left.  I have now committed five units on this flank and they are at risk of being pinned by the remaining Carthaginian skirmishers. 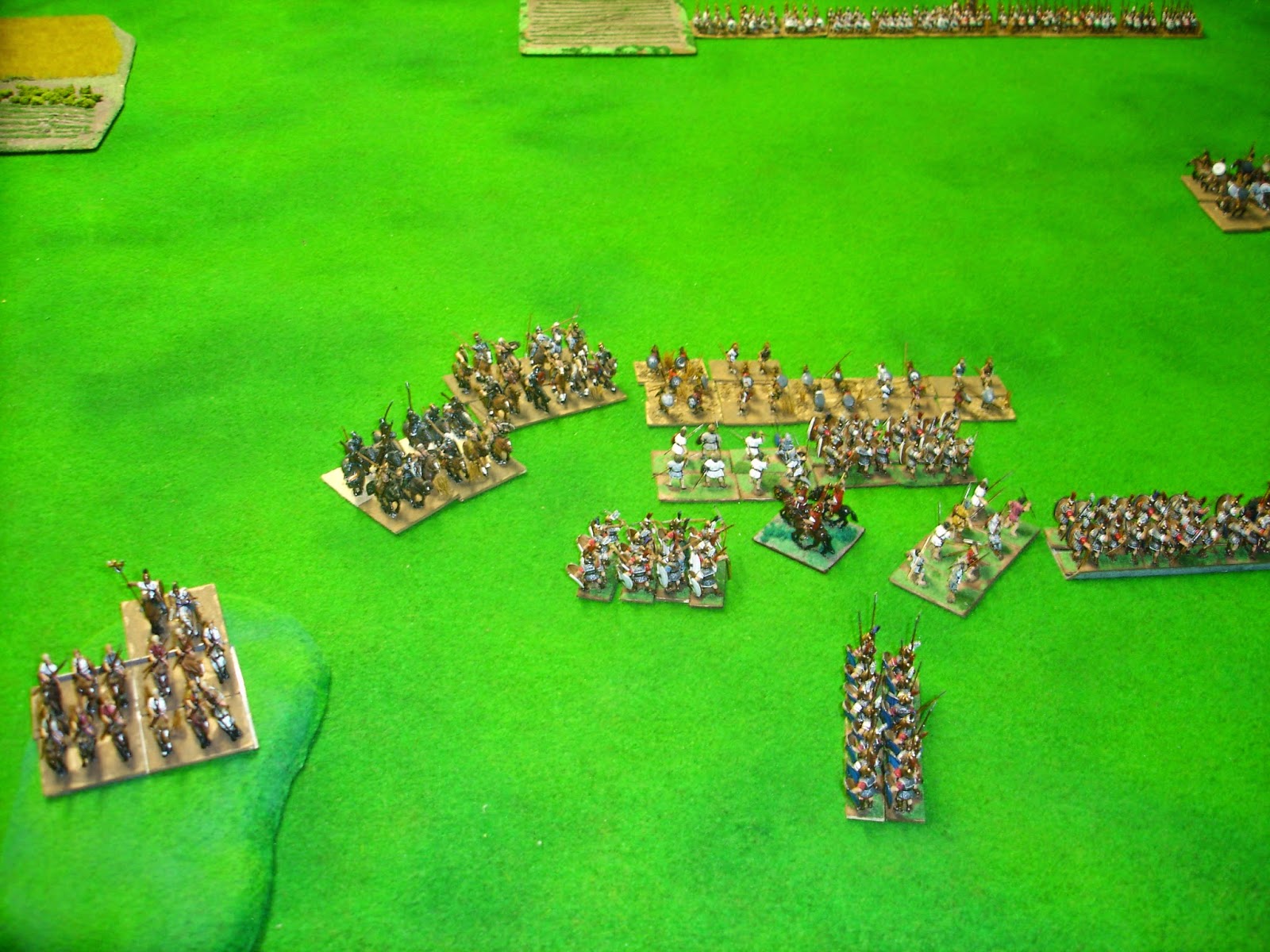 Meanwhile on my left one of my small units of legionnaires has got a bit enthused charging the enemy skirmishers.  I tried to hold them back, but they wanted in. 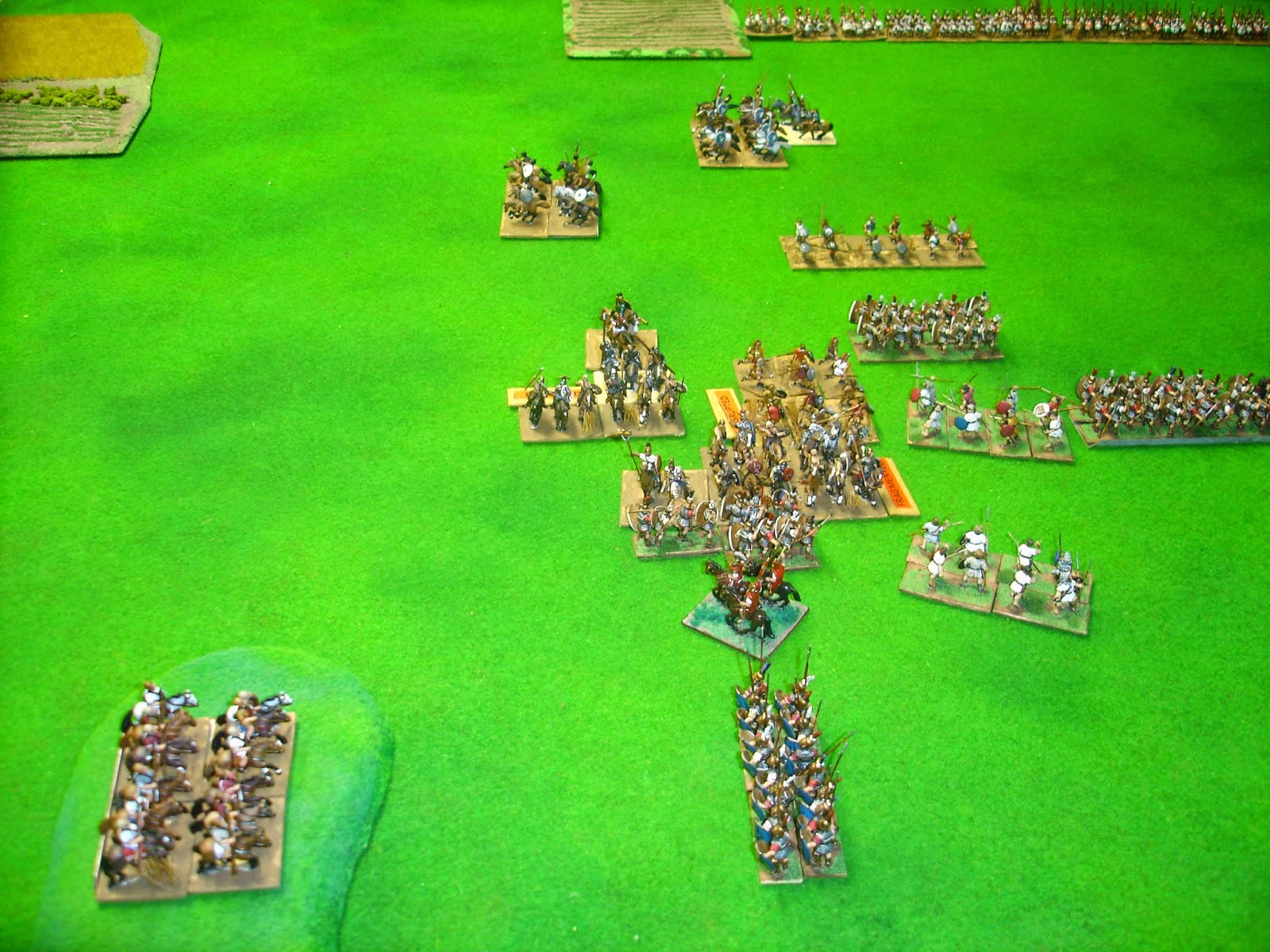 The Carthaginians launch their first cavalry charge and it is bloodily repulsed. 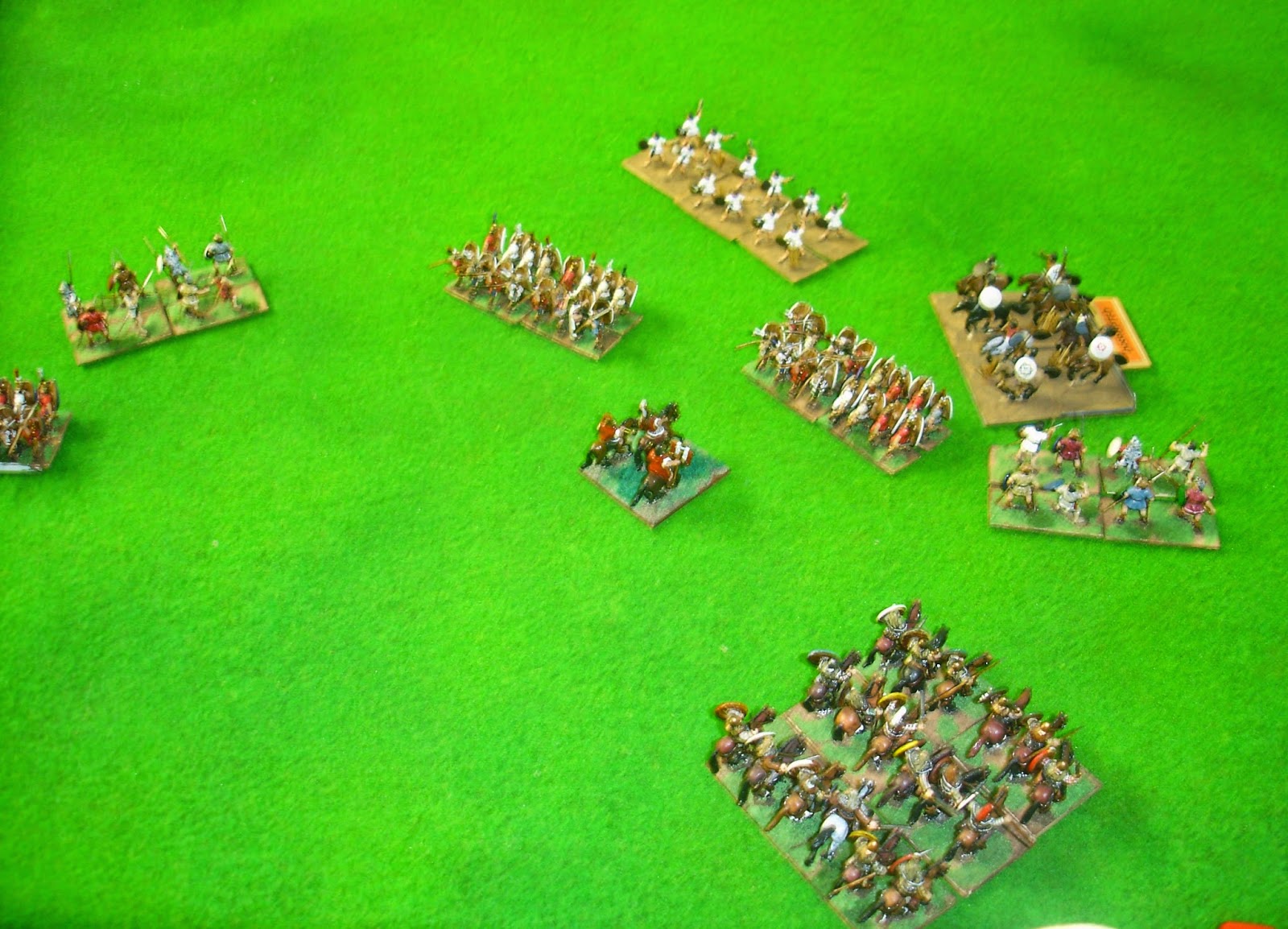 On my right flank the enemy are finding themselves surrounded. 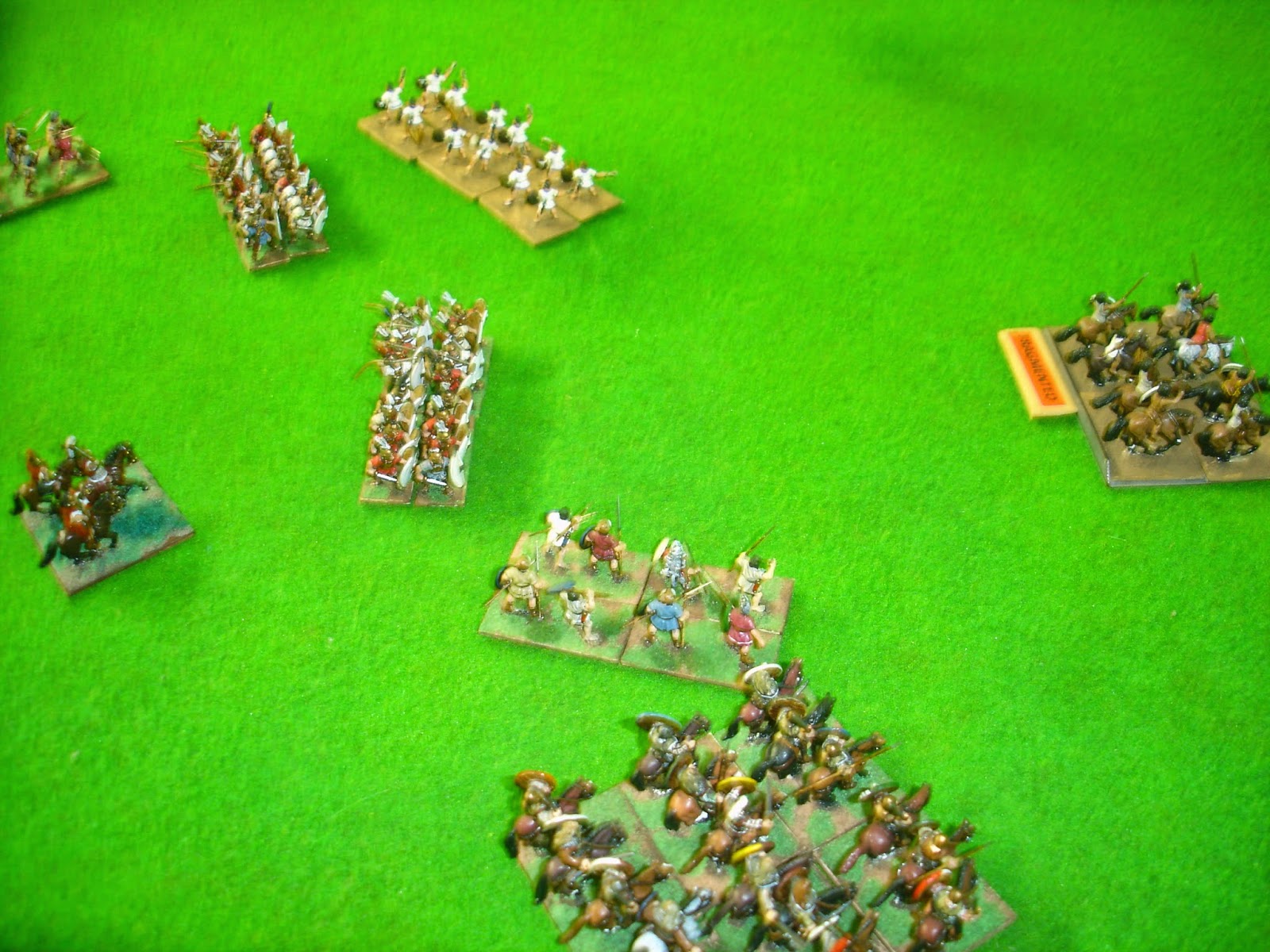 It goes badly for them (seems they were adverse to javelin fire). 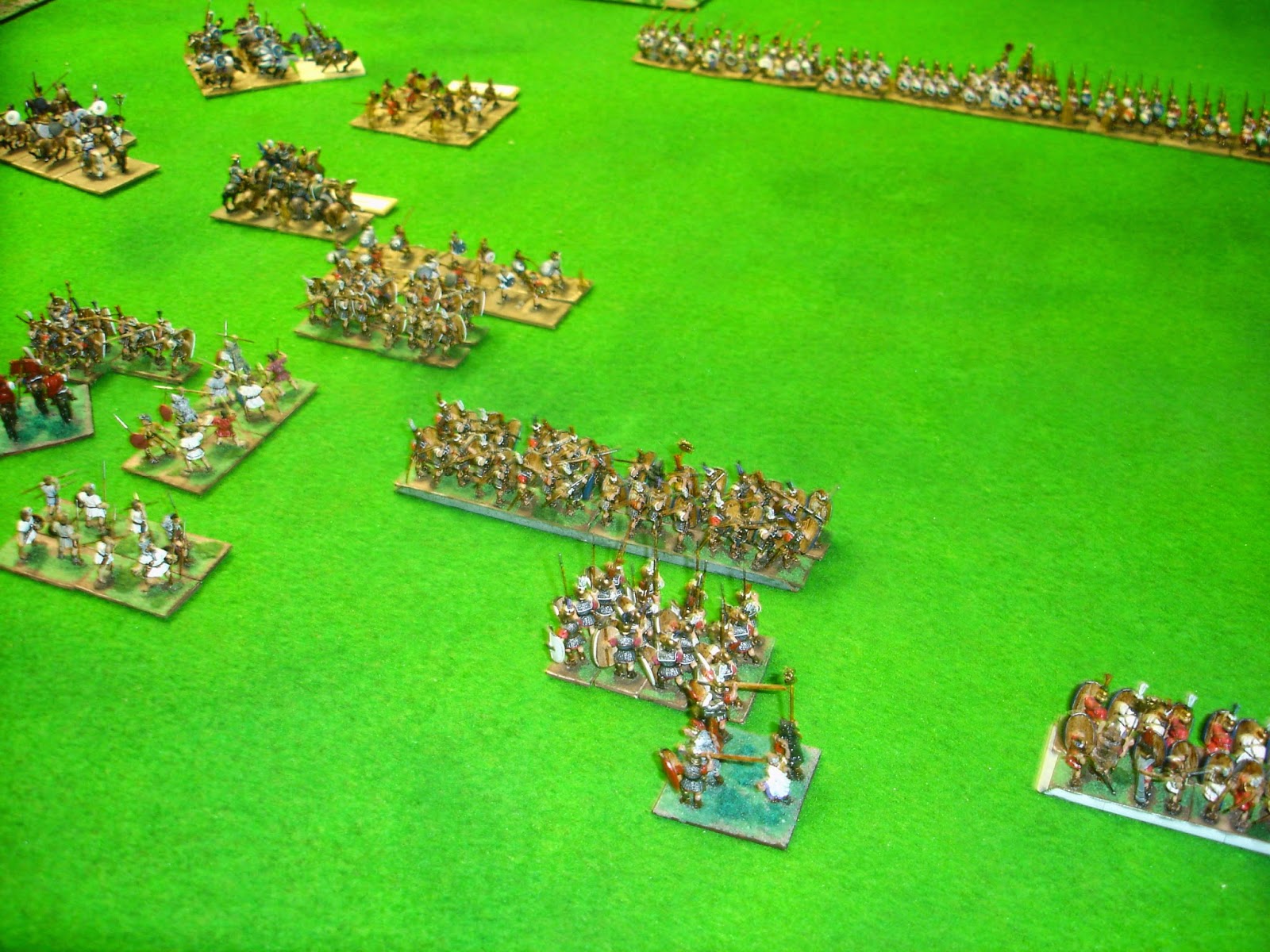 On my left that over eager legion has continued to push forward and I am forced to start advancing and sending in the last of my reserves to fill the gaps its impetuosity has created.  Doubly so as the additional Carthaginian cavalry from their left has now arrived. 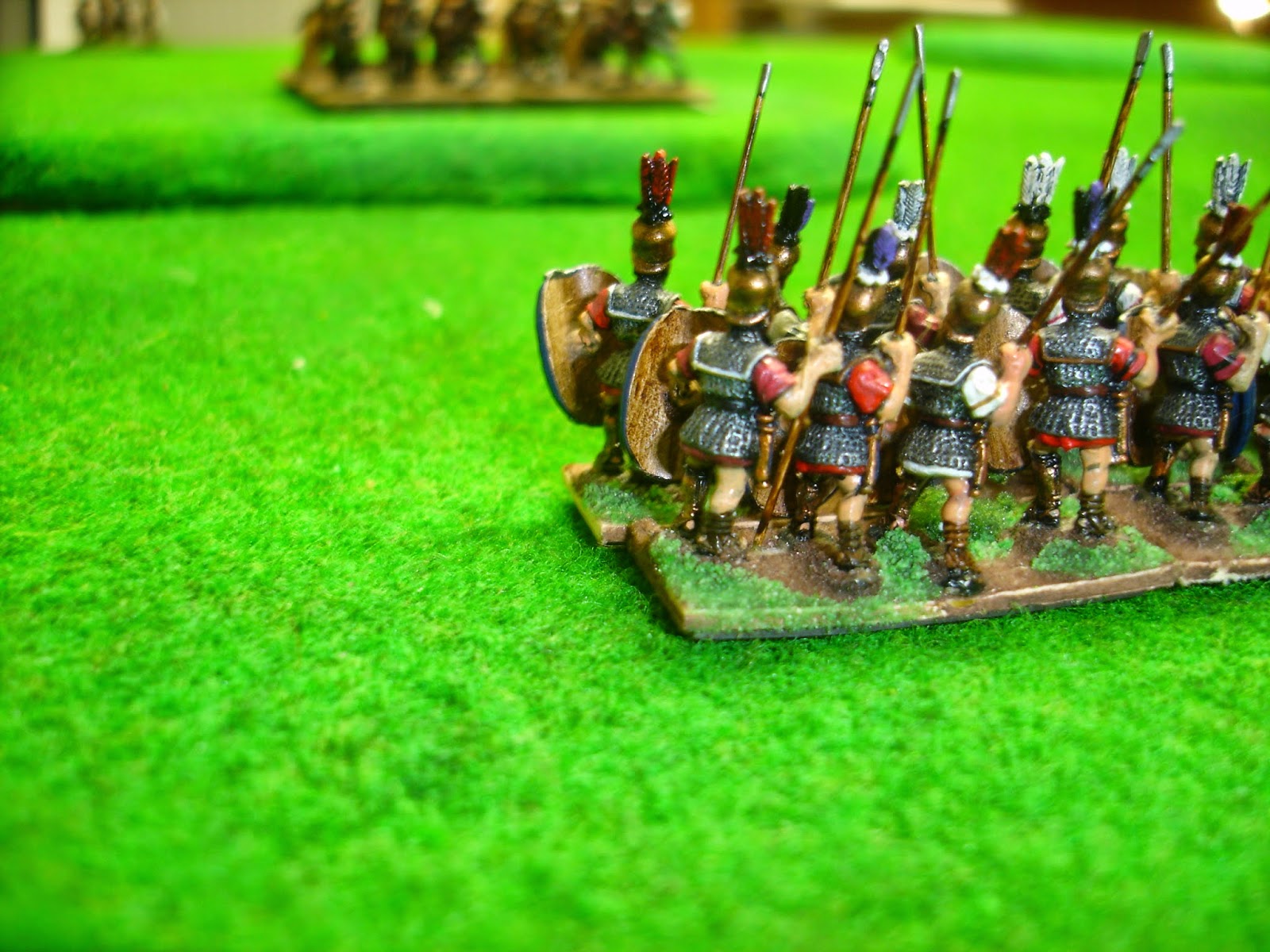 The Triarri face off the cavalry on the hill. 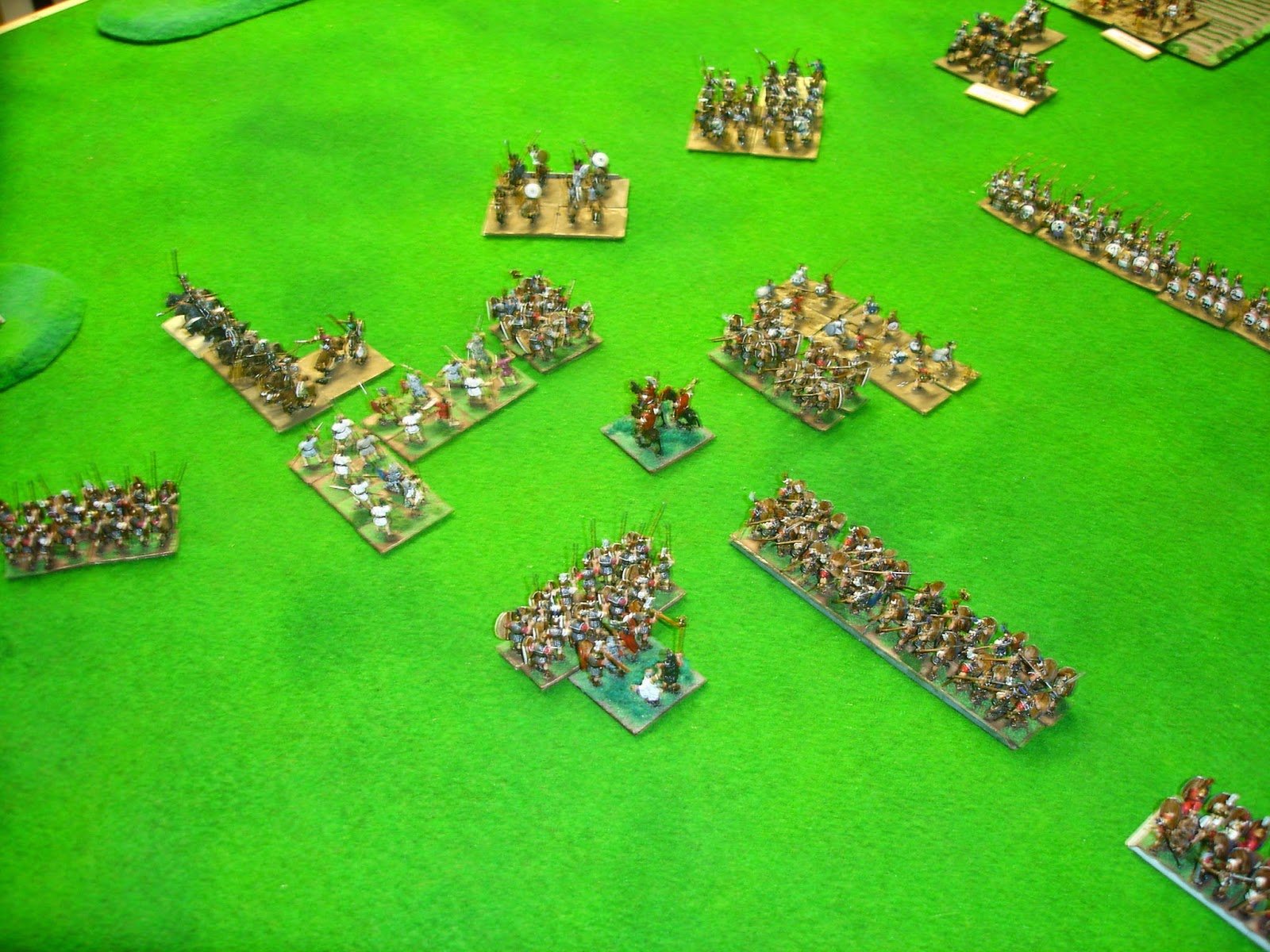 The Carthaginian centre is now advancing and the impetuous legion is getting shot up.  Help is on its way, but it is a confused situation over there on my left. 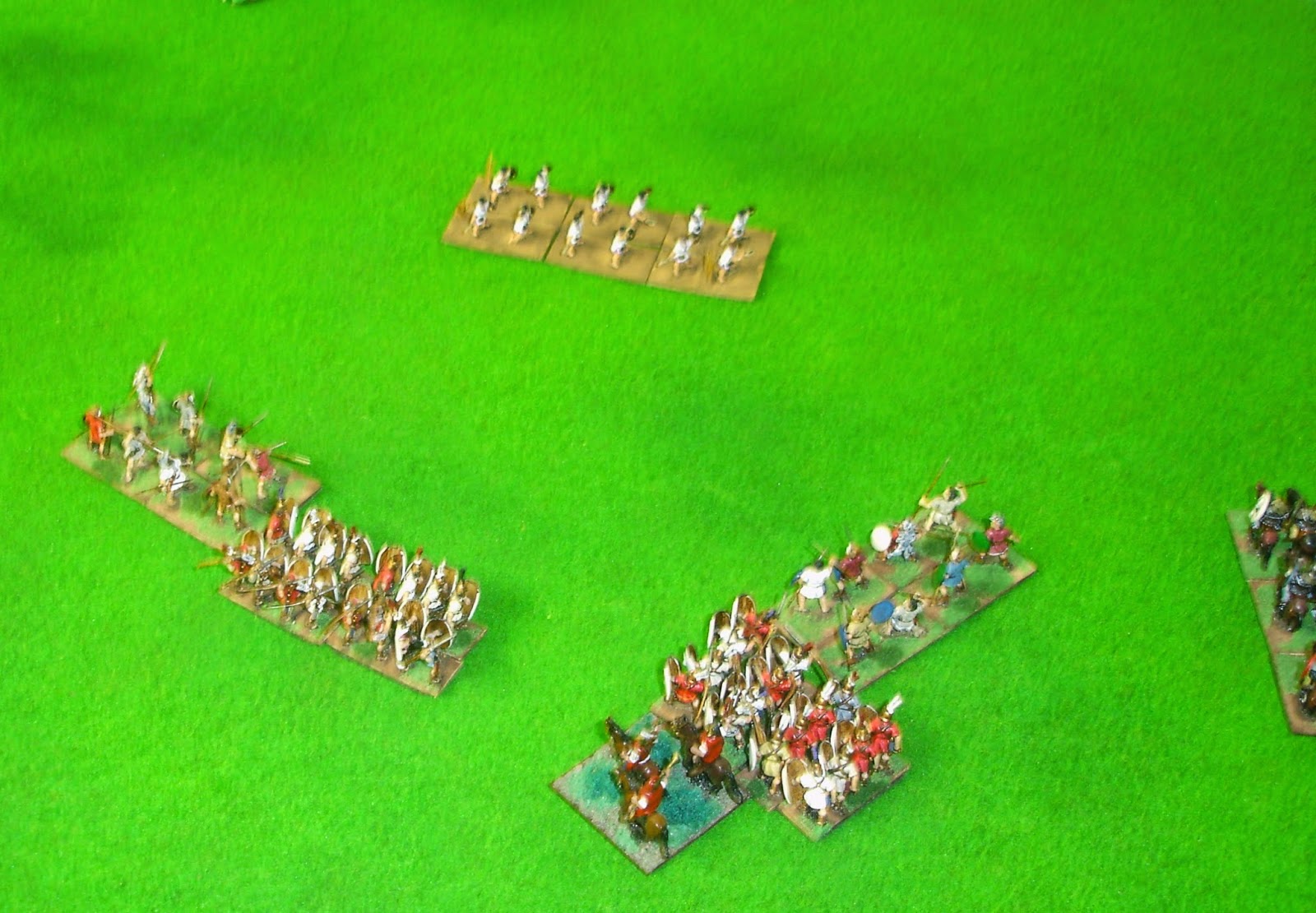 See the little buggers run!  With their light cavalry support having scarpered the Balearic slingers pull back. 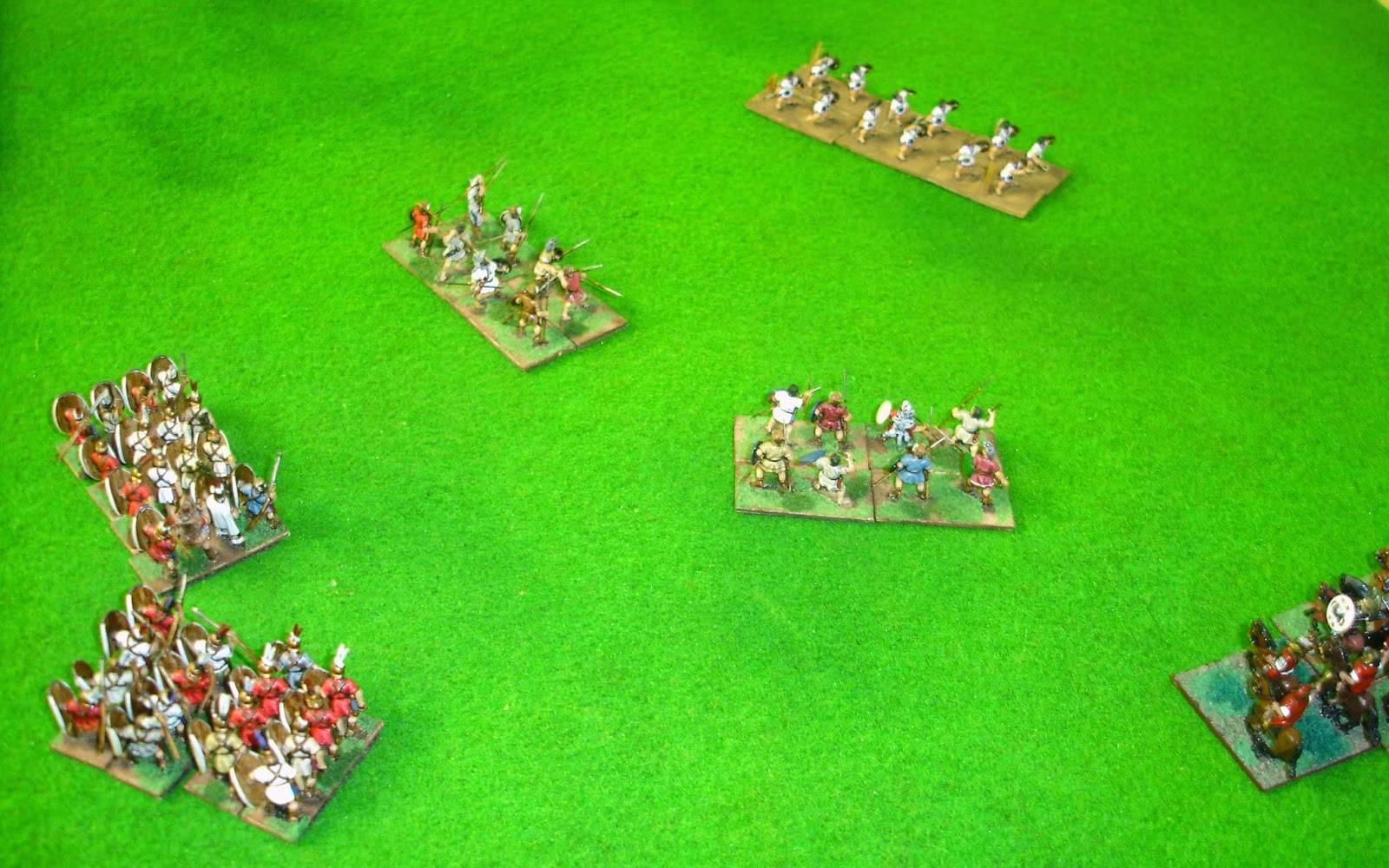 The velites can go after the slingers and that gives me three units I can now move to the centre. 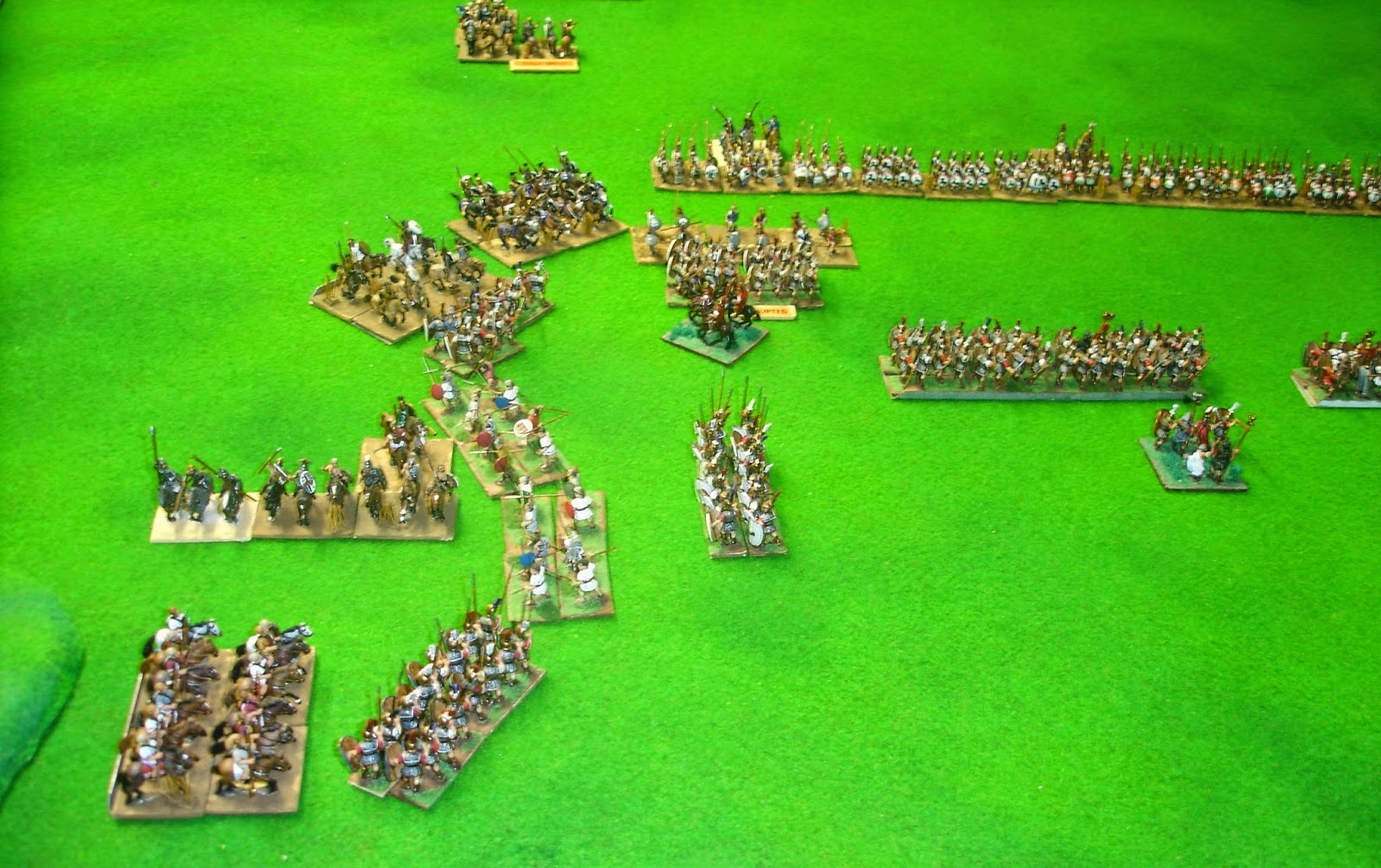 The left wing general is trying to bolster the over eager legionnaires. 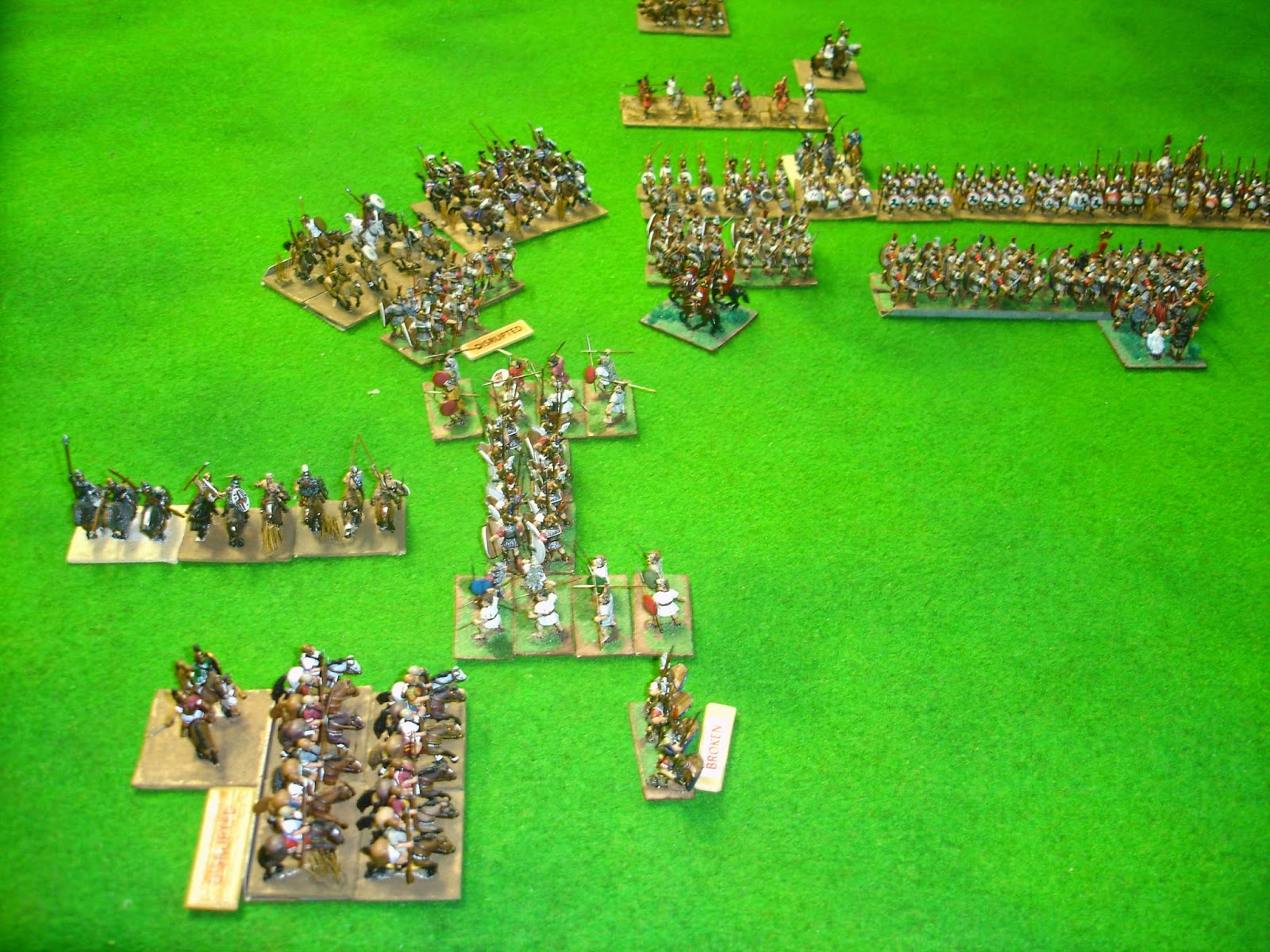 Disaster strikes.  One of my elite Triarii units is attrited to death after failing three death rolls in a row.  It didn't break so much as vanish.  A supporting unit of legionnaires (who had previously repulsed a cavalry charge) were being shot up bad as well. 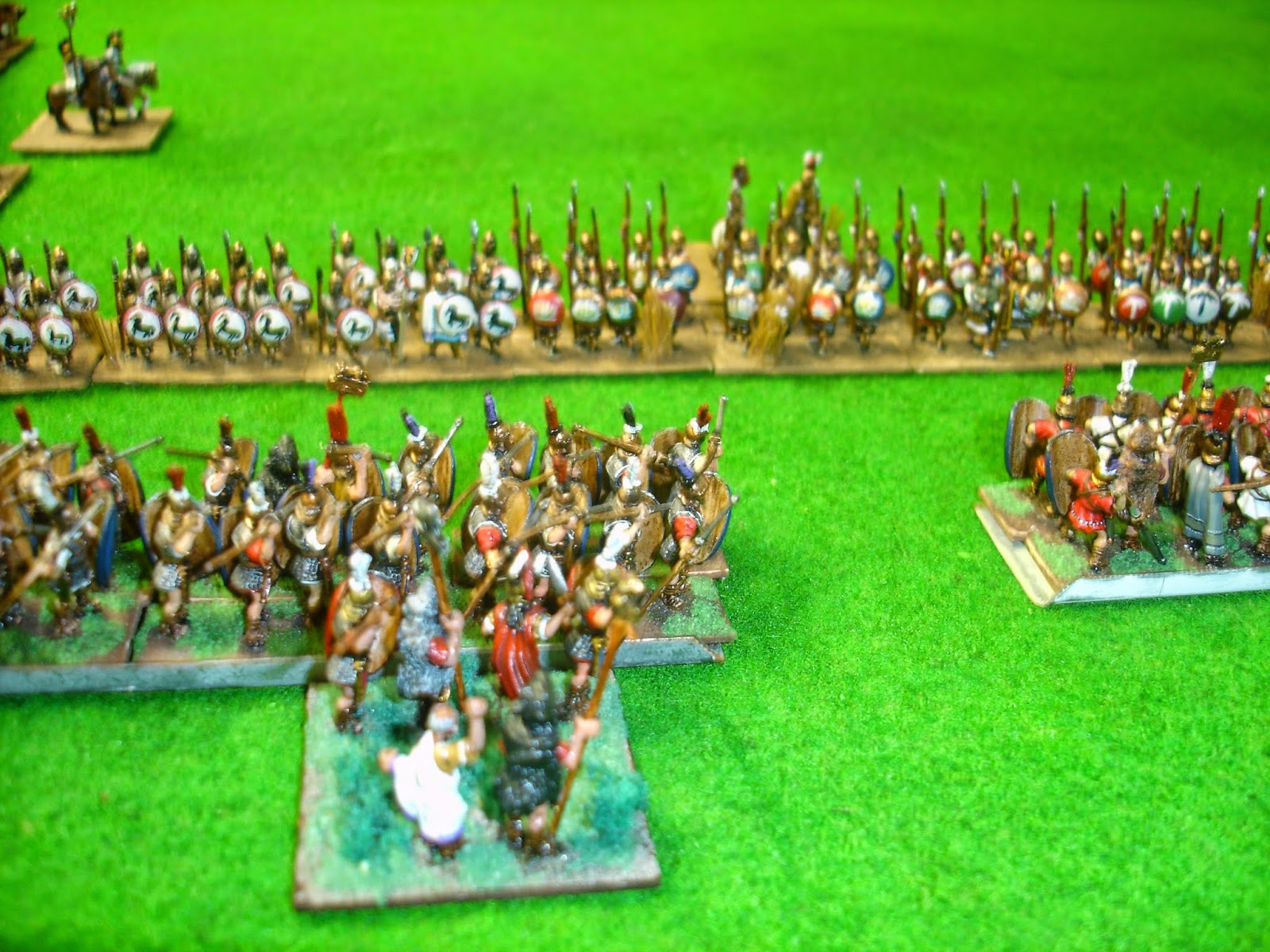 The centre.  My two big veteran legions, with general are about to charge. 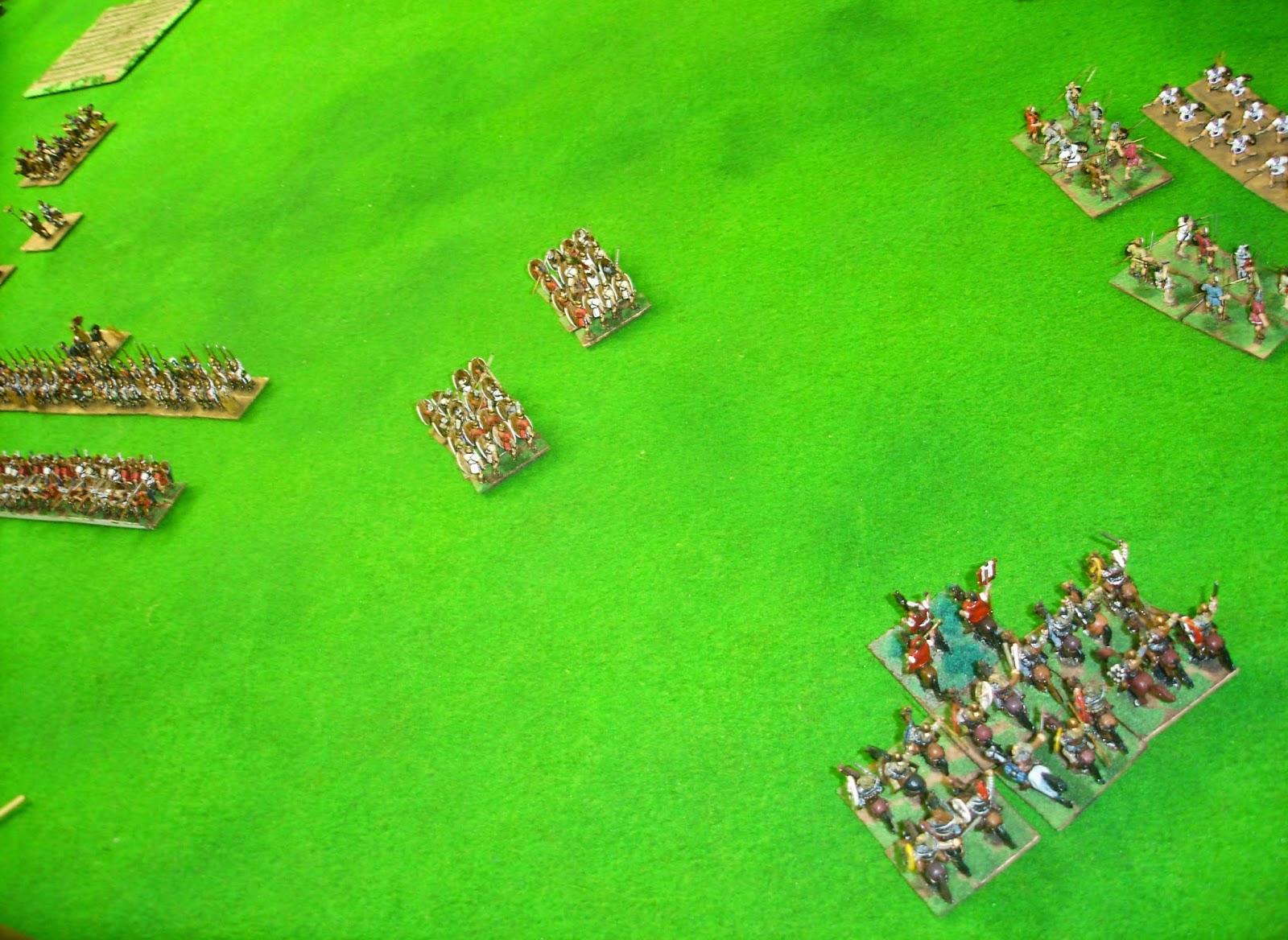 The troops from my right approach the enemies undefended left flank. 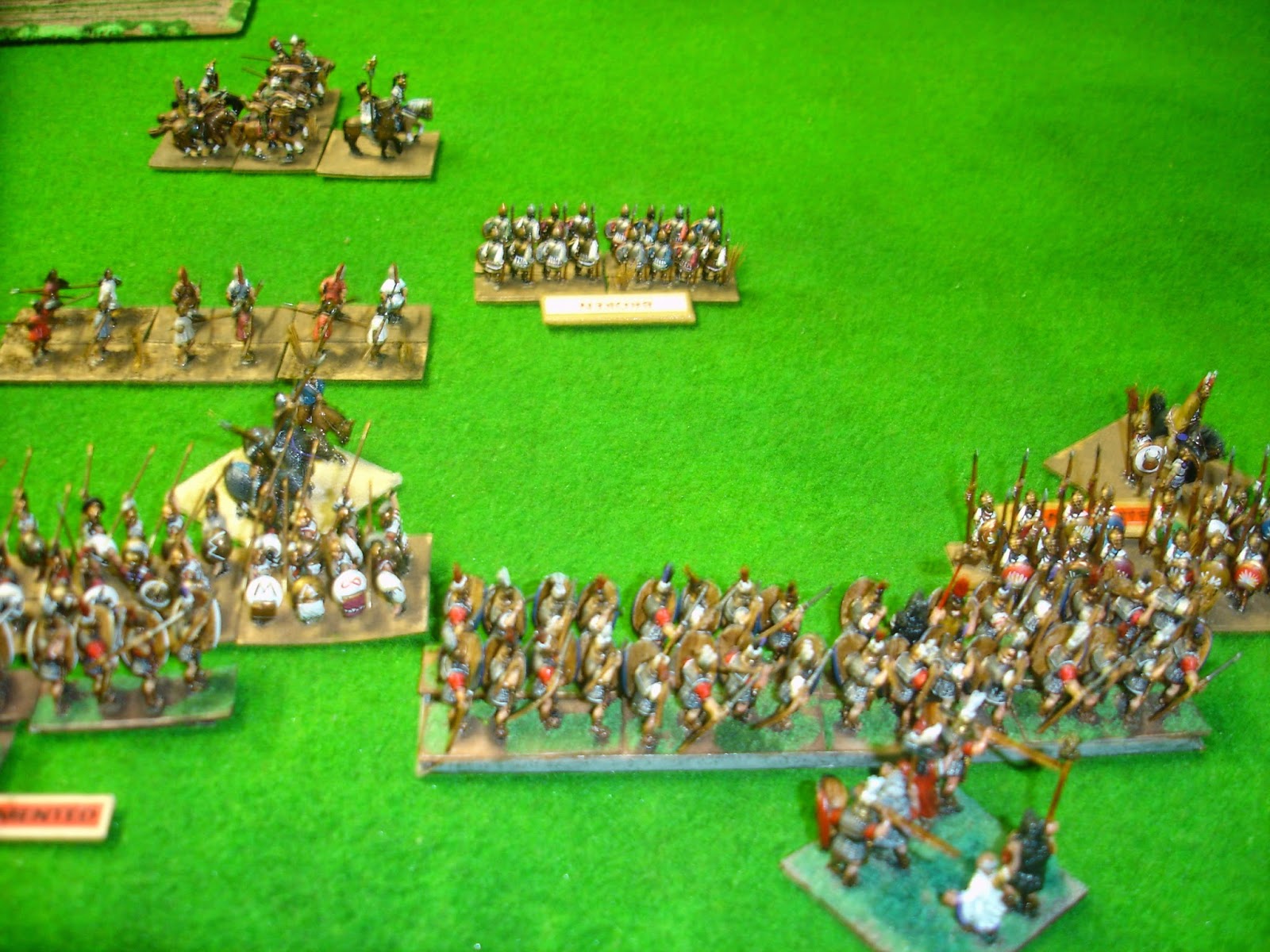 Things go bad for the over eager legion, but the veteran legion smashes its opponent. 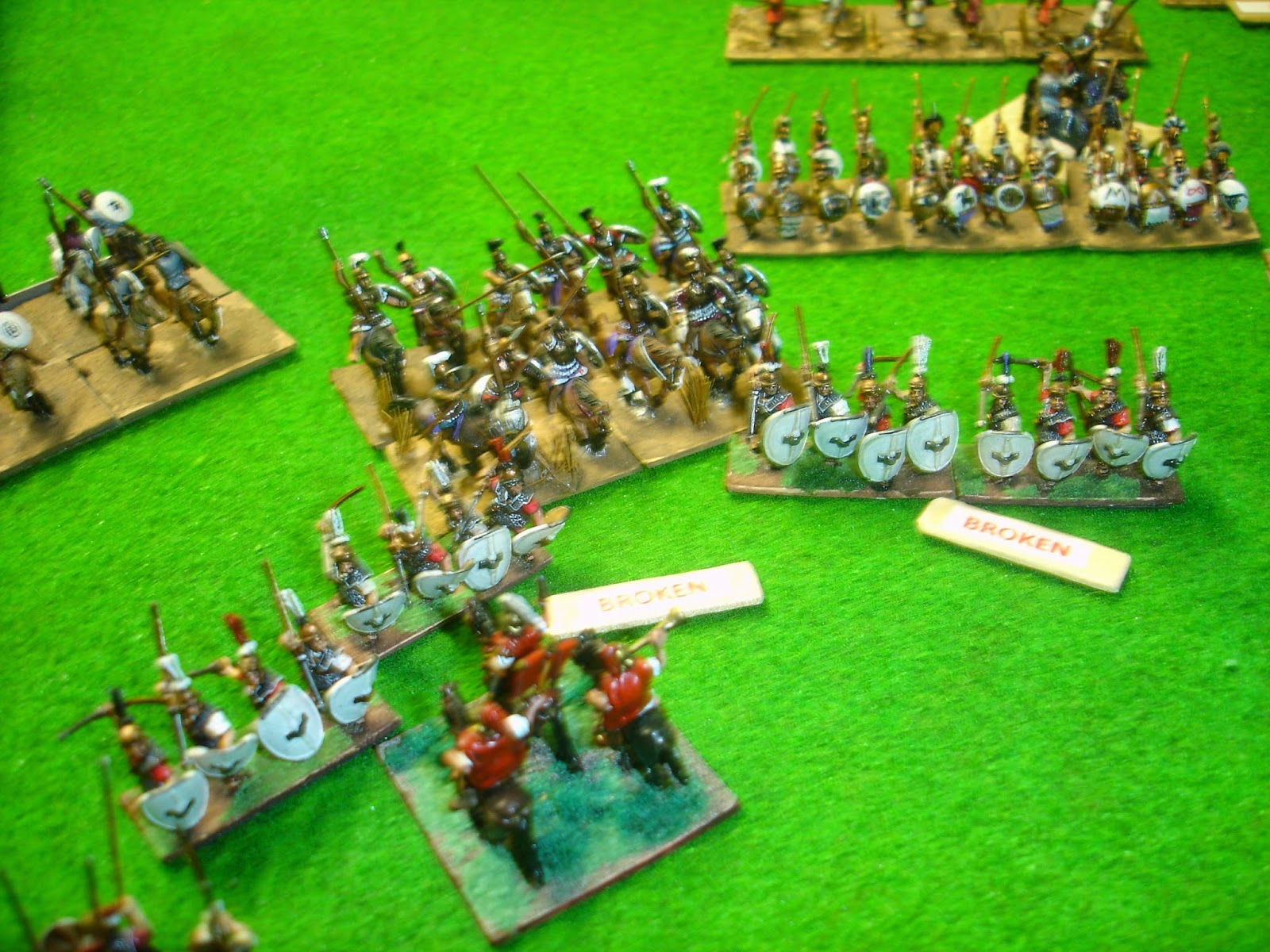 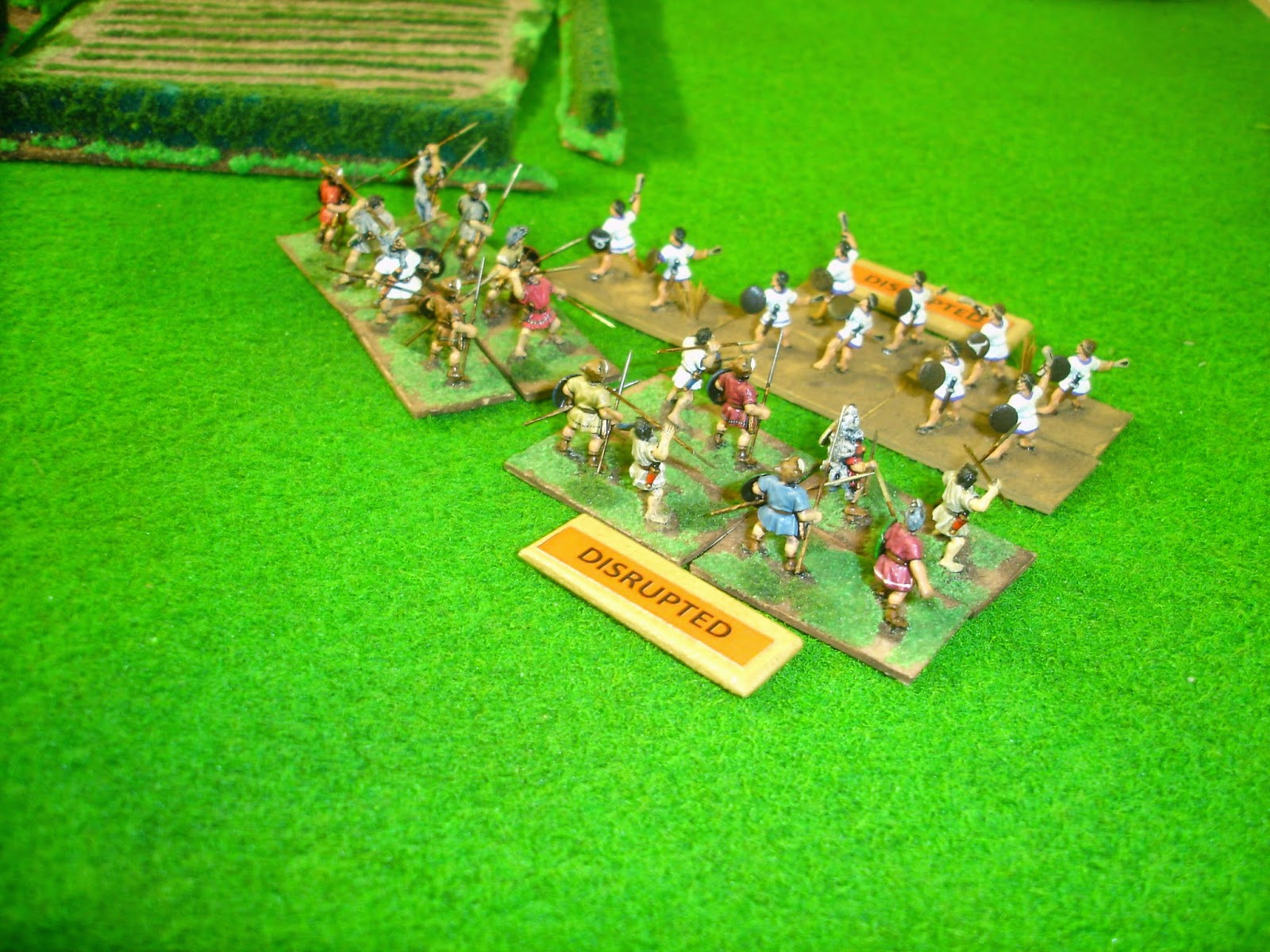 On the right those pesky slingers are finally run down. 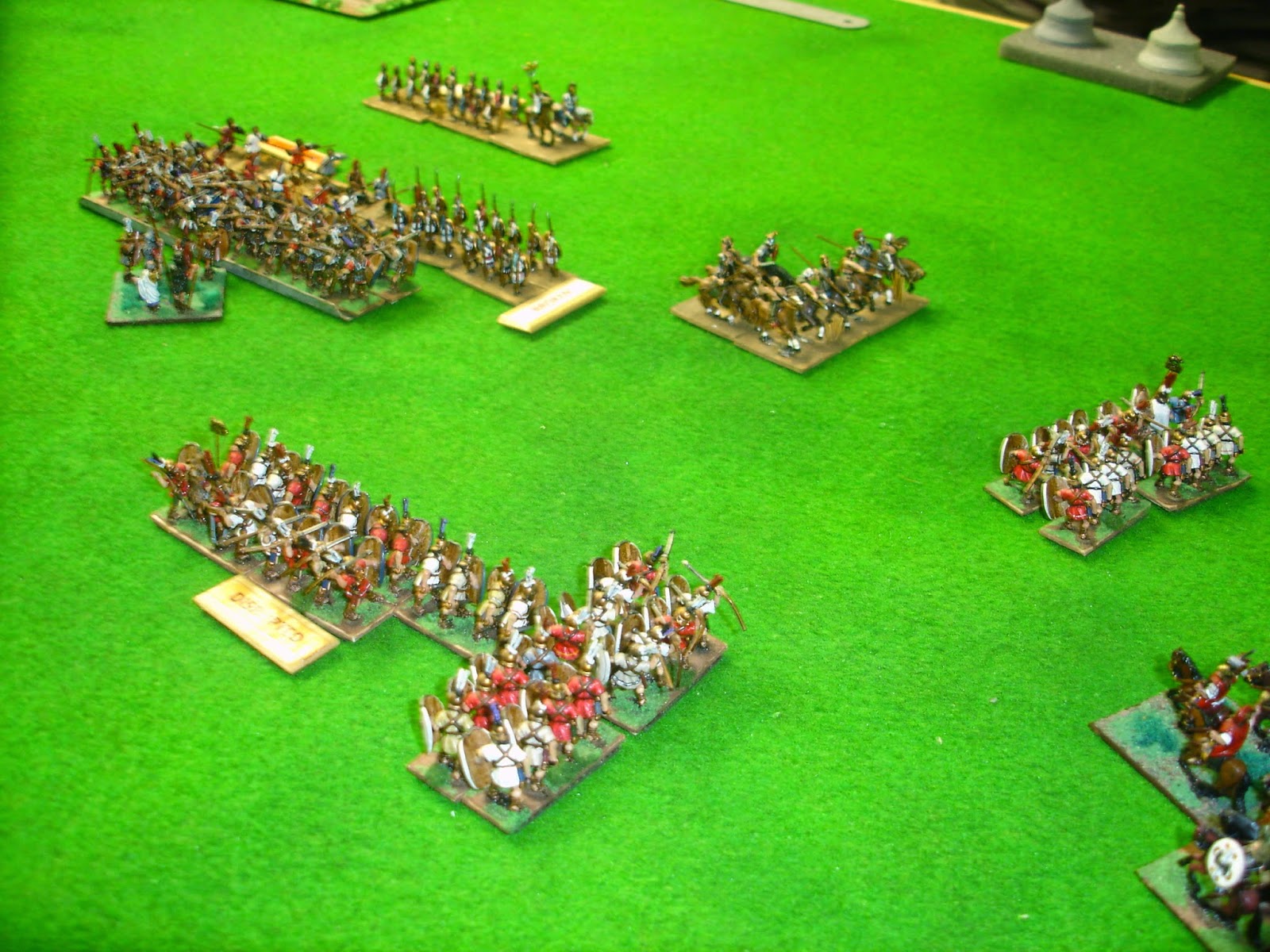 When my right hand troops hit the Carthaginians in the flank they disintegrate.  Hannibal is killed around the same time. 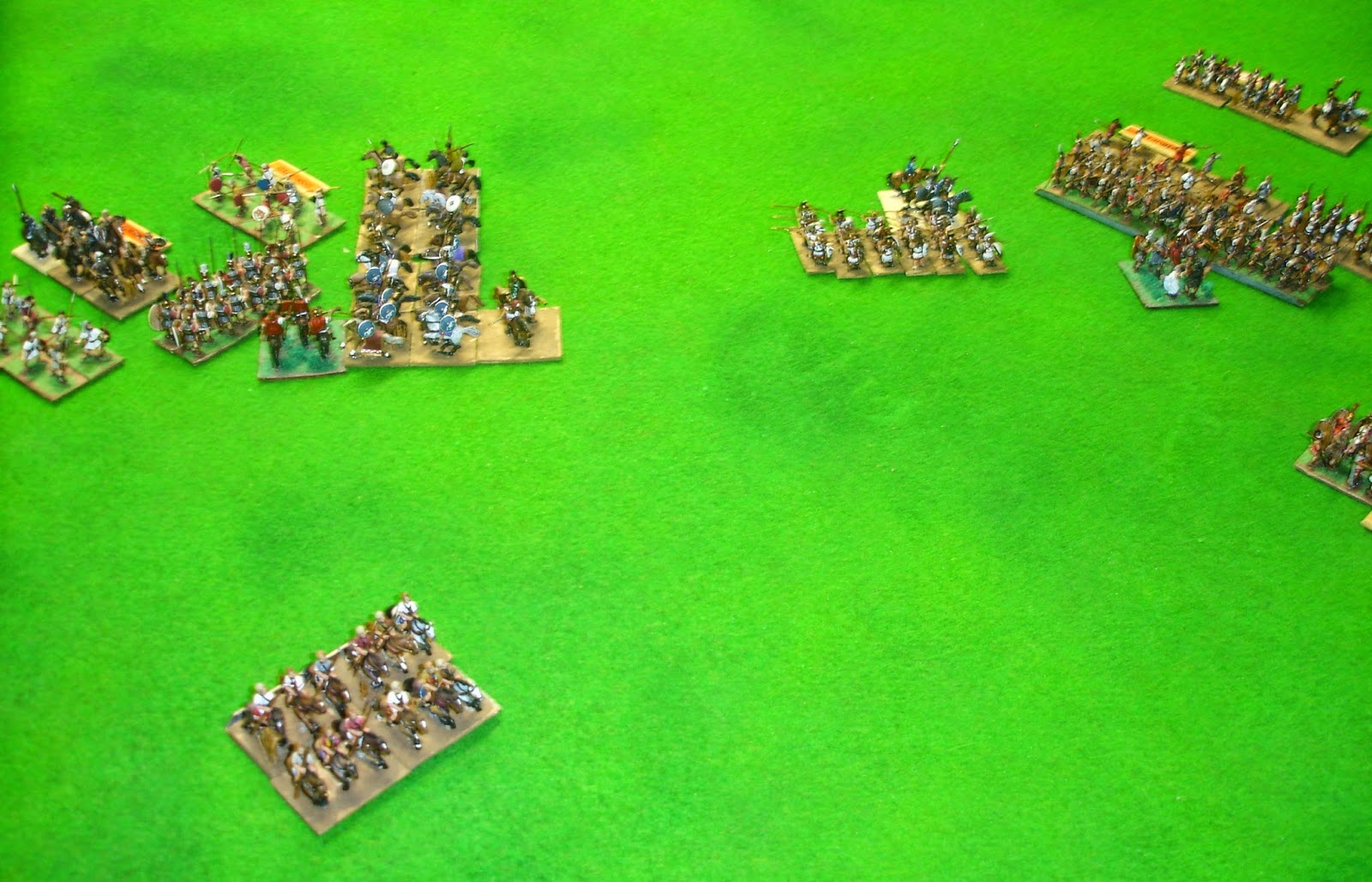 The Carthaginians have broken through on the left. 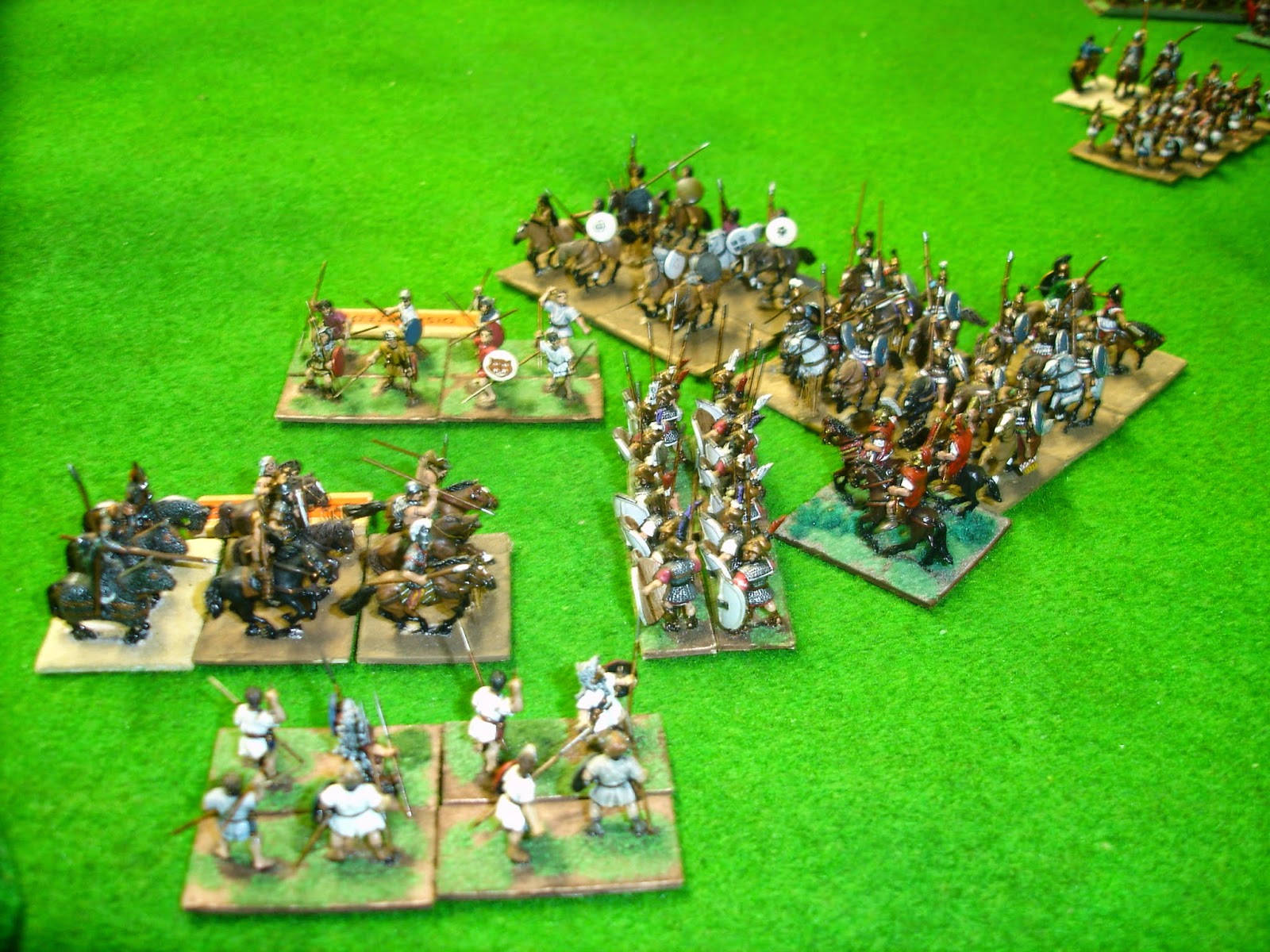 However it is too late as they watch in horror as one of their cavalry units is smothered in javelins and starts to fail. 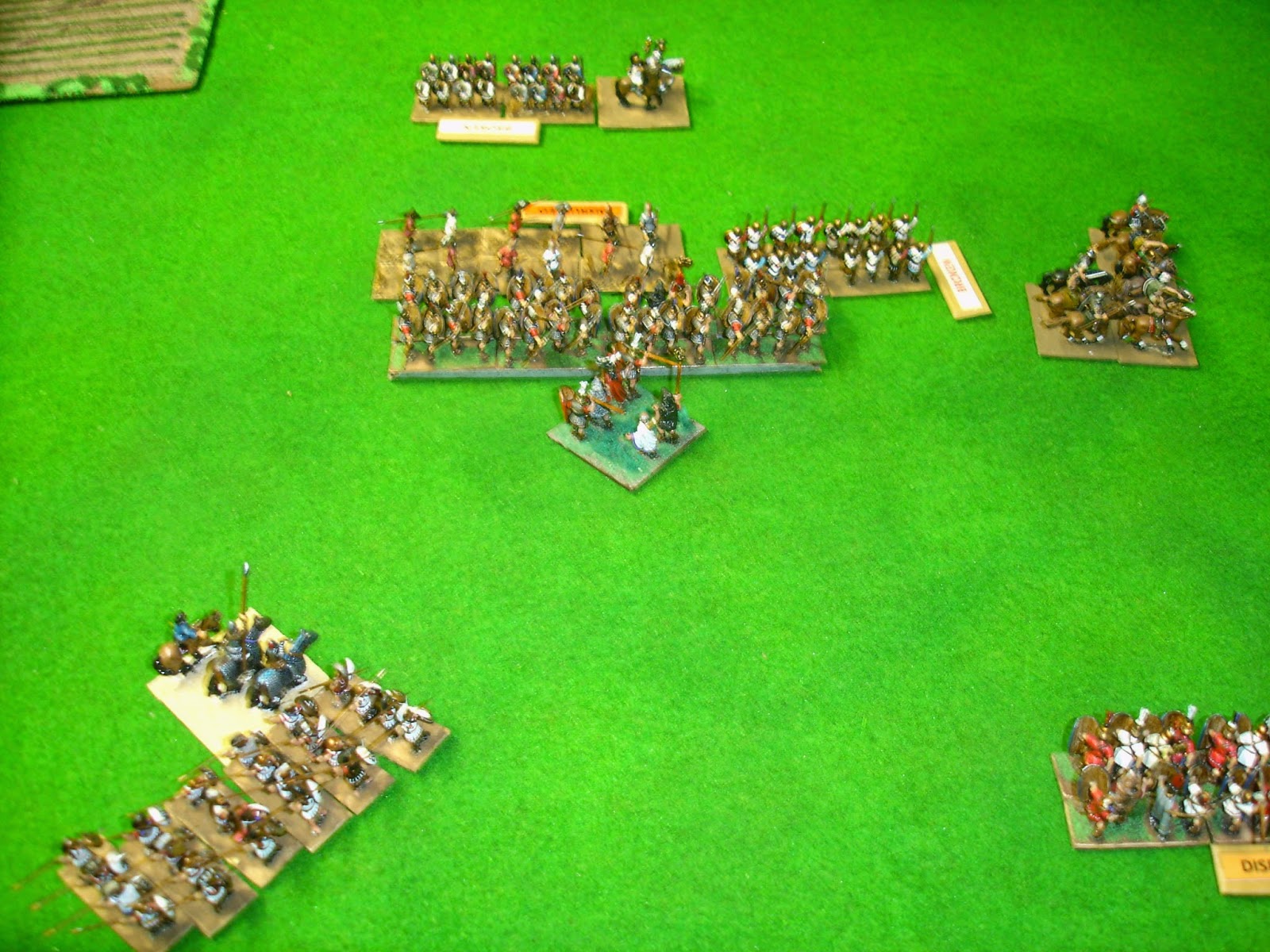 The Roman centre pushes on as the Carthaginians take to their heels.

Epic battle.  We played about four hours on Monday and about another hour on Tuesday to finish it off.

All figures, dice and bright green terrain from Mark W's collection.  Crappy photos by me, mostly due to me forgetting to take off the macro setting.