Burgundian Ordonnance versus (soon to be) Late Eastern Imperial Romans

In a club Impetus League game my Burgundians fought Brendan's Romans in what proved to be a very exciting game. 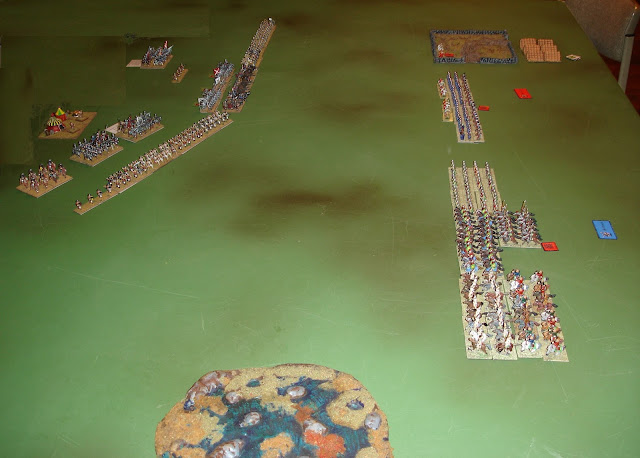 Both sides deployed with their strength on their left flanks.
I was expecting more Romans, but what you see is what you get for 550 points. 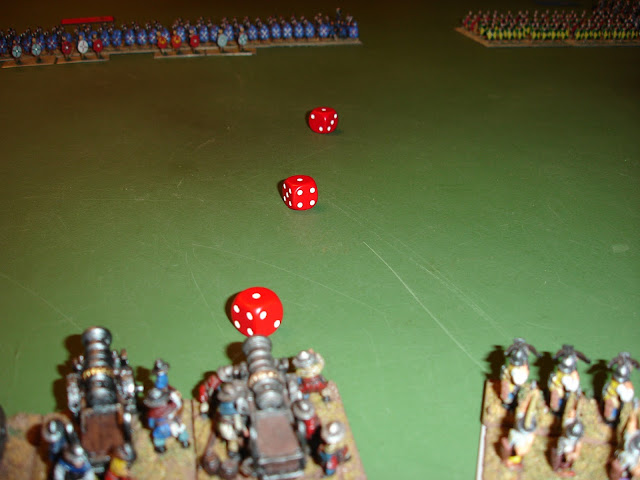 My bombard has a spectacularly unsuccessful first shot...1...1...1 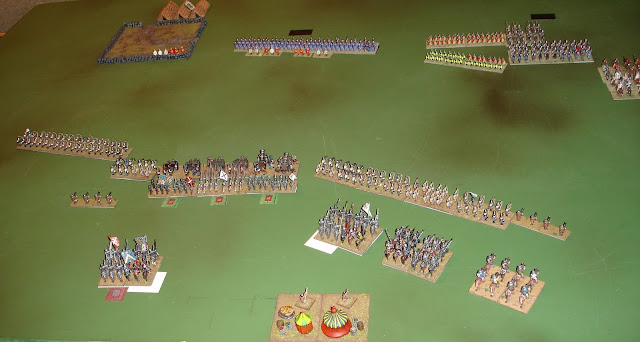 End of Turn One and both sides are advancing their left most commands. 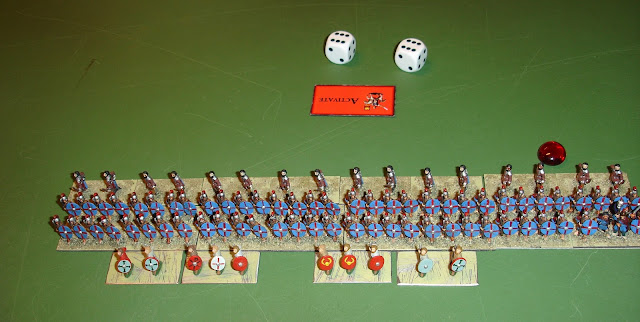 The Roman commander of the right flank goes up from Fear to Expert.
After a bit of banter I worked out he was Fair to start with, and that I had misheard.
As it was, his command would do very little in the battle except be used for target practice.

End of Turn Two from the Roman perspective. 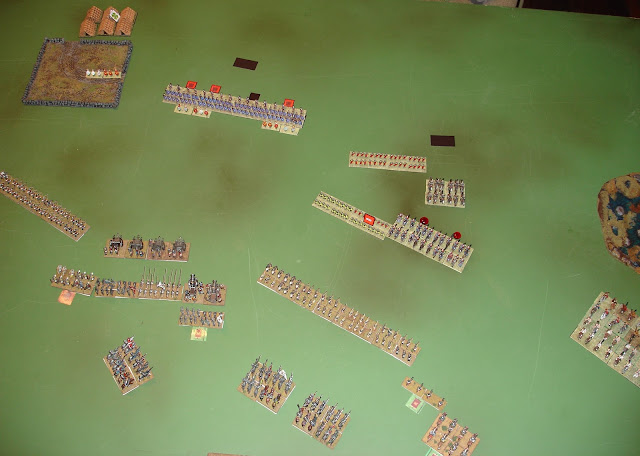 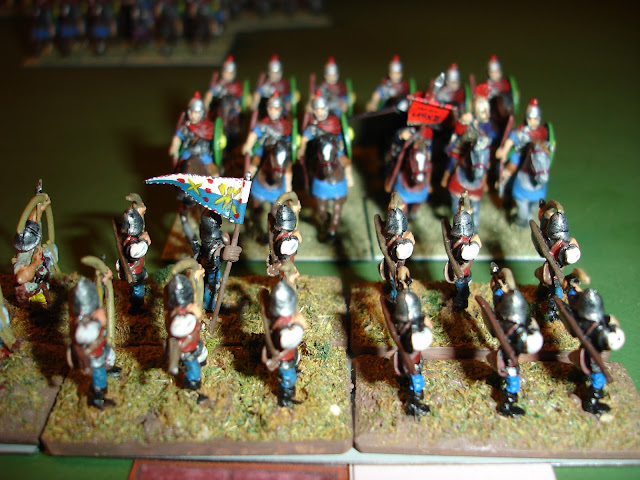 The Romans charge.
The longbow suffer, but hold, momentarily... 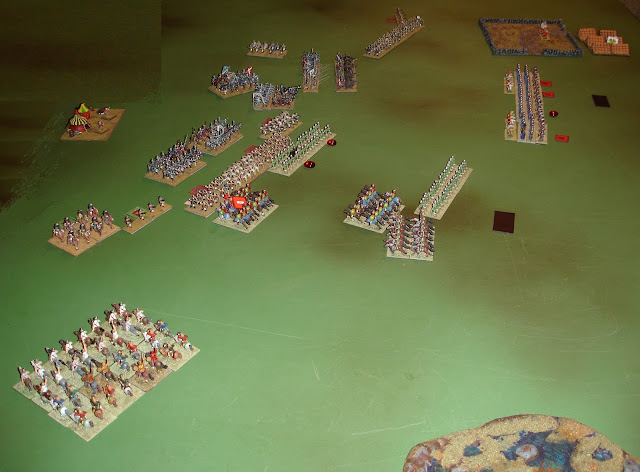 End of Turn Four, from the flank where all the action has been.
The mass of Roman light cavalry is yet to get into action. 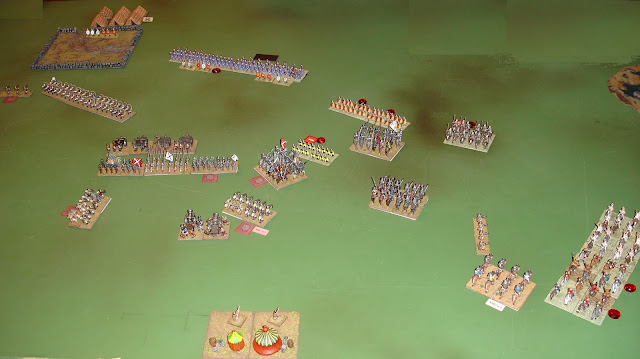 A lot has happened.  The Burgundian knights have magnificently charged to the rescue after the line of longbow has collapsed.  The Roman genius commander has been lost along with his unit and another.  The light cavalry is trying hard to wipe out their opponents. 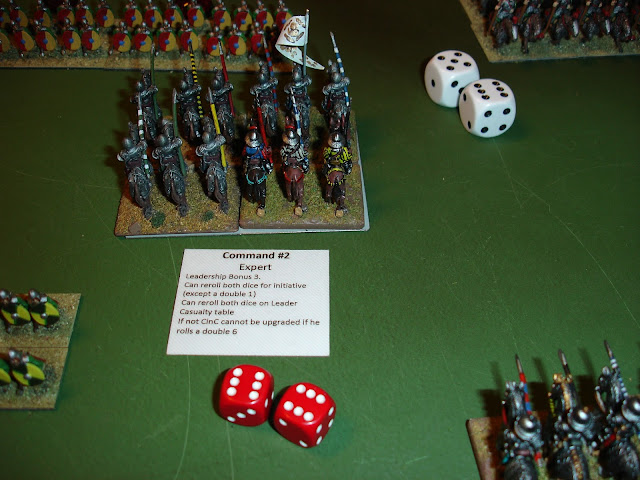 Critical turn.  The Burgundians needed to win the command role.  The Romans, minus their genius general, rolled first and threw an 11.  The Burgundians came back with a 12, which also meant the Expert general was really a genius too.  Nice one!  (Sadly you can only have one genius in any army and the Burgundian CinC was a genius). 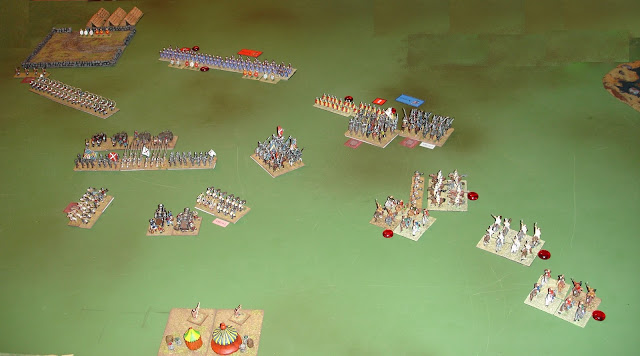 End of the game.

The Burgundian knights finish routing enough Romans break their big command which in turn breaks their army.  The Burgundian right hand command was just one unit short of breaking, but the Roman light cavalry couldn't quite do it.  Even if it had broken, being the smallest of the Burgundian commands, they still would have fought on.

Please note that a few of the above photos have been patched to cover up table litter, or extraneous background and unfashionable player body parts.  Such a great victory deserves the best in my presentation skills.

Interestingly for my games, only half of the units were engaged.
Posted by Sun of York at 3:36 PM