Arranged at short notice to take advantage of the NWS Games Day we had an 800 point Impetus game using MarkWoods' magnificent 6mm armies.

A bit of human inserted into the picture to provide some of contrast. 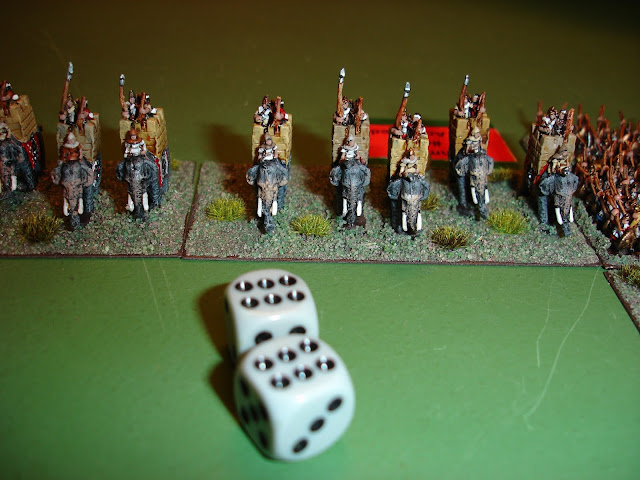 The Carthaginians get off to a good start when their CinC is upgraded.
He was already a genius so the impact was negligible. 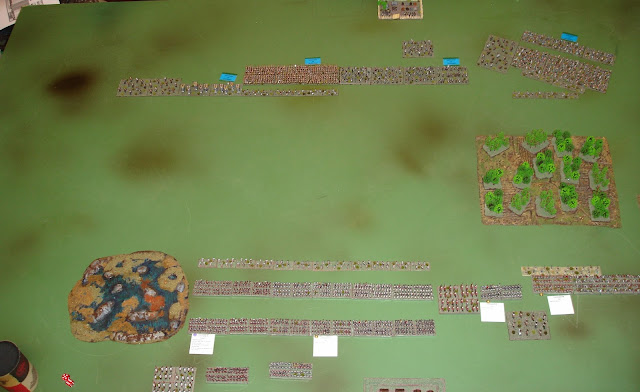 End of the first turn.

The Romans were in four commands.  The first three were Roman legions and the fourth Italian infantry (Light Foot), perfectly placed to contest the woods and protect the right flank.  The left was protected by an impassable water feature.  I had the two leftmost commands and Stephen N the right.  Annoyingly I had numbered them 1,3,2 and 4, but kept getting 3 and 2 mixed up.  The big white squares are just aide memoires to help denote when commands had been activated etc. 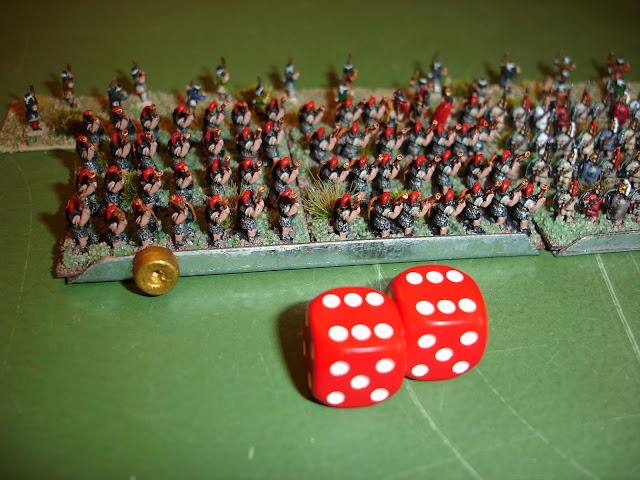 The Roman right flank commander gets upgraded from Fair to Expert.
A great omen! 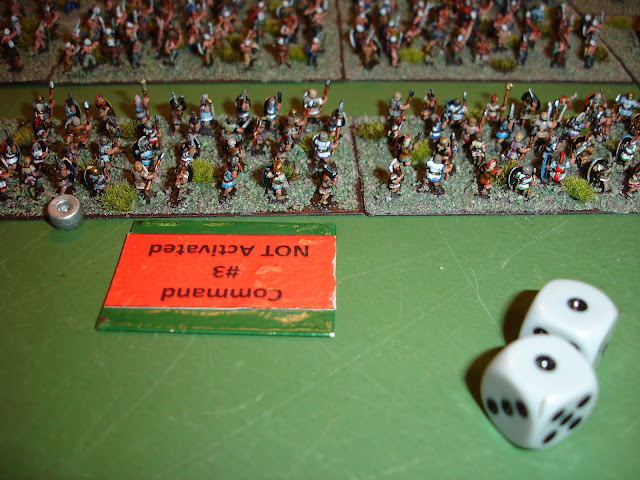 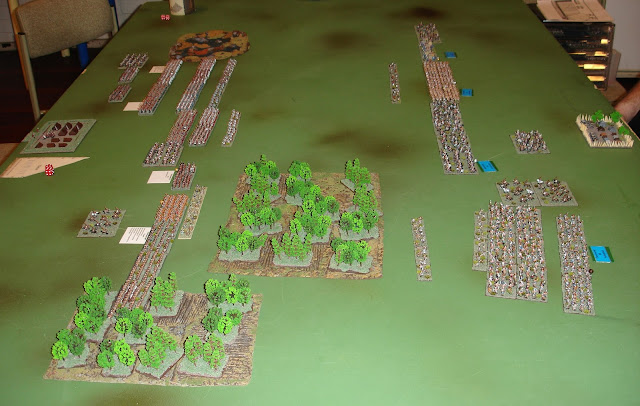 End of the second turn.
The Roman left has stopped while the right pushes on.

The Carthaginians were in four commands as well, from their left to right (or top to bottom in the above picture) there was a command of Elephants with the Genius CinC, then the infantry, the cavalry and finally the expendable Gauls.  A very different army composition to the Romans. 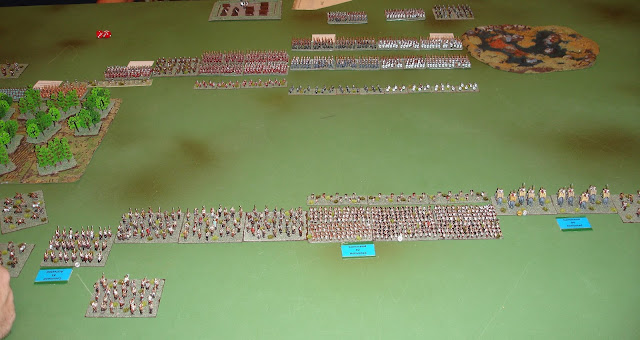 End of turn three.
A better picture of the Carthaginian cavalry, infantry and elephant commands.
The Gauls are off to the left. 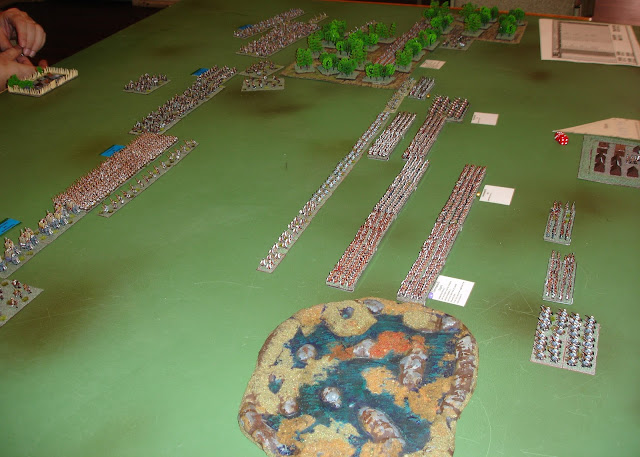 End of turn four.
Both sides seem reluctant to come to contact, 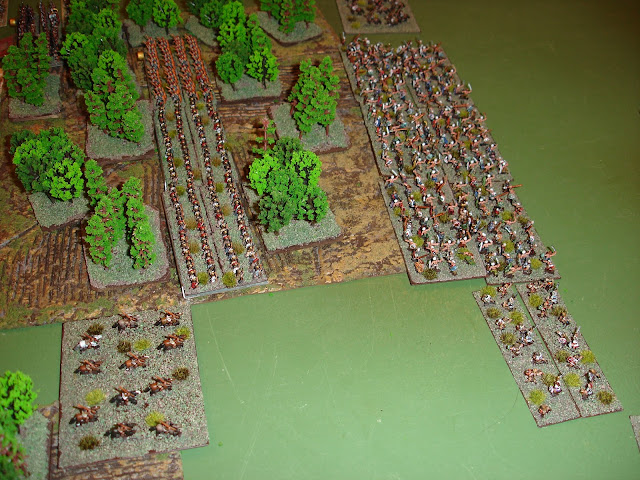 But that is all about to change. 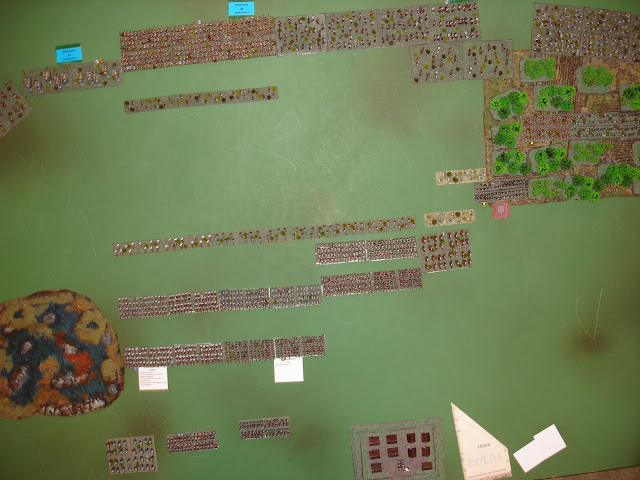 End of turn five.
The Gauls have entered the woods, but can hear, but not see the Italians. 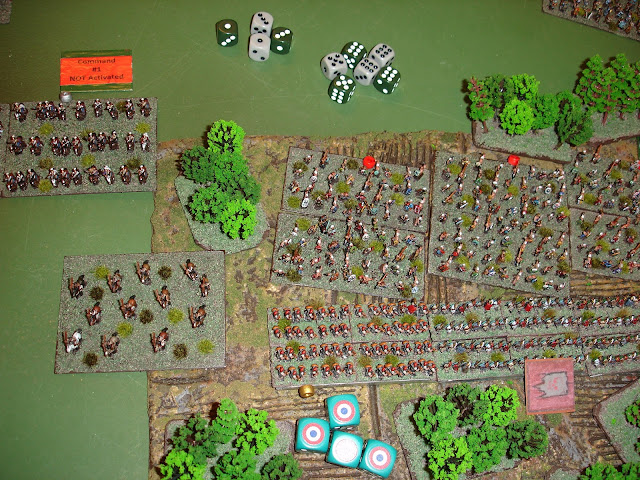 The three Gualish warbands charge.
The first two (right and centre) don't accomplish much, but the third one (left)... 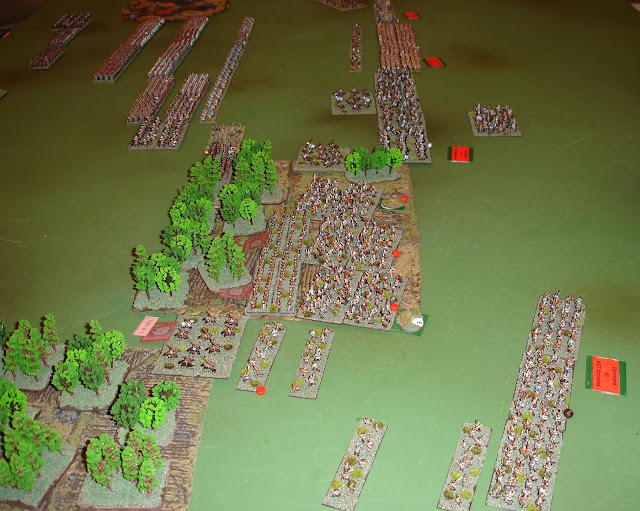 End of turn six.
That left hand unit of Italians was destroyed (threw a six on the Cohesion Test), but the Gauls (who also threw a six for their Cohesion Test) survived due to a timely Hand of Fate reroll. 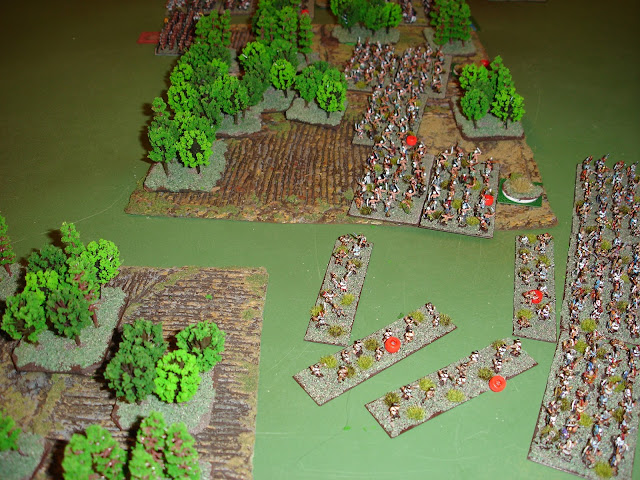 Then the Italians just died enmass. 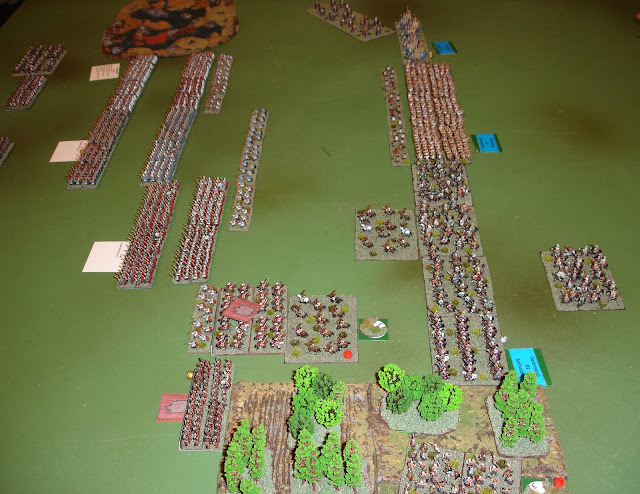 End of turn seven and the Roman left is in big trouble.
The cavalry charge and are initially successful... 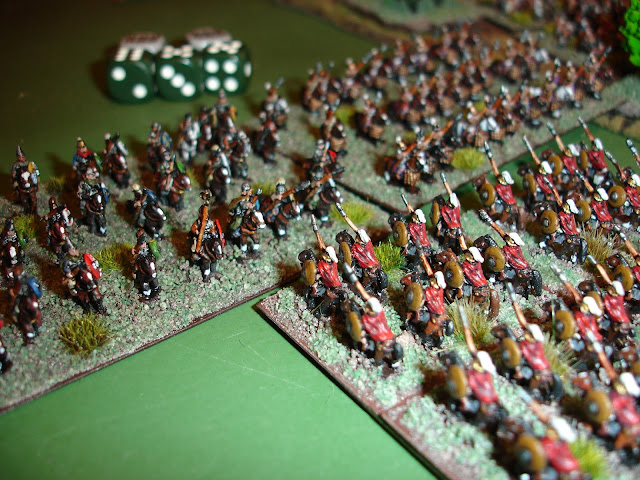 But it didn't last. 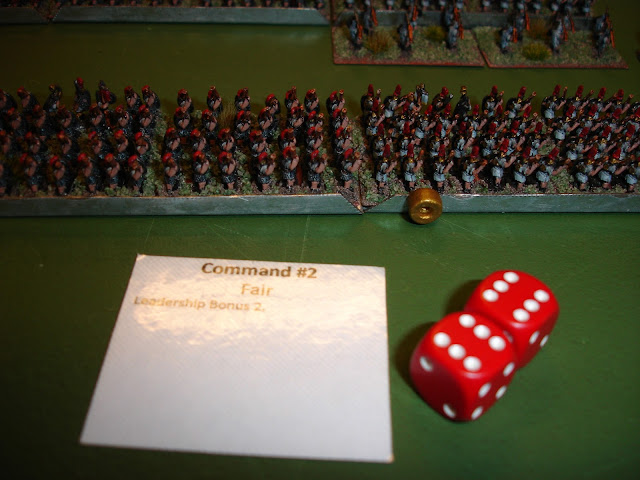 But still the omens were good as yet another Roman commander goes from Fair to Expert.

It is worth commenting that the Carthaginian commander of the Gauls repeatedly threw double ones for his command activation.  I lost count after six; of course only the first one counts. 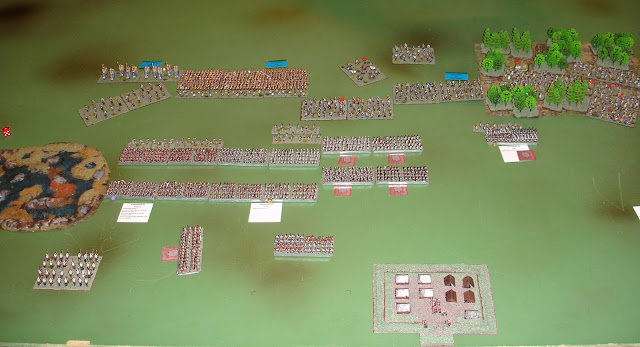 End of turn eight.
The Roman Italian command has been removed
and the Gauls are powering through the wood:
they can smell the bacon cooking in the Roman camp. 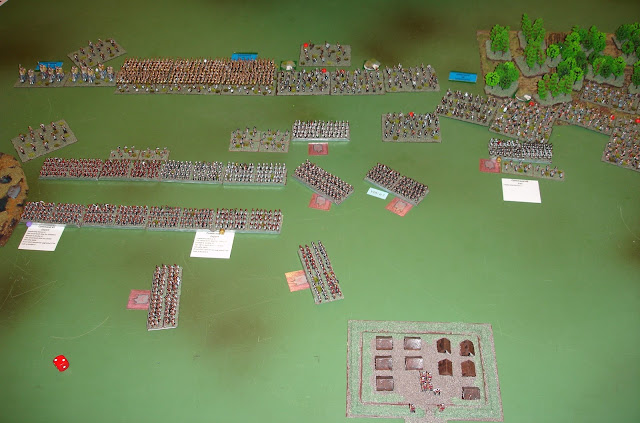 End of turn nine.
The Romans are rushing reinforcements (Triarii) to rebuild their left flank.
There has been some vicious fighting between Roman legionaries and the Carthaginian horse.

End of turn ten.
The cavalry battle on the left continues with the command being broken, but then restored after some unhelpful person pointed out that the otherwise destroyed light horse unit could have evaded and therefore reduced its risk when shot at.

The Carthaginian infantry and elephants are now advancing.  The remaining Roman cavalry has been sent on a march round the impassable water feature to hopefully outflank them. 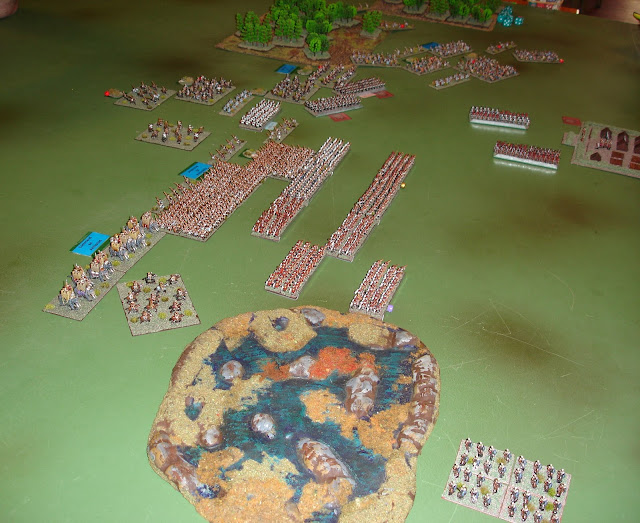 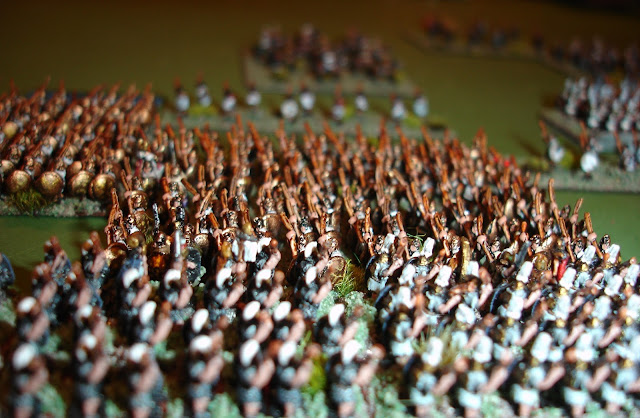 The real battle has now started with the heavy infantry of both sides coming into contact. 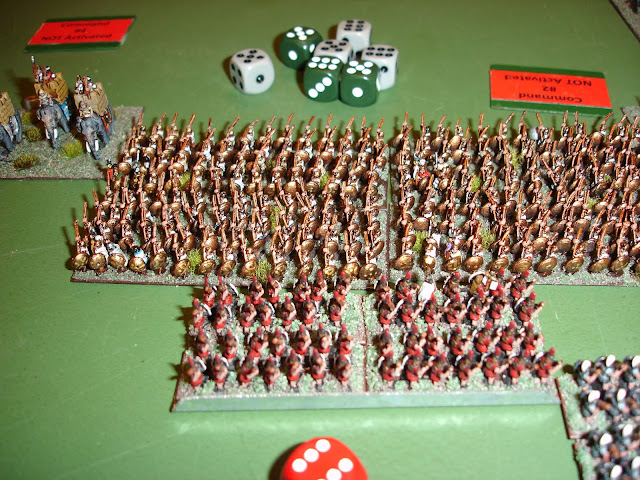 And I thought the omens had been good???
The Romans get one hit against five by the Carthaginians. 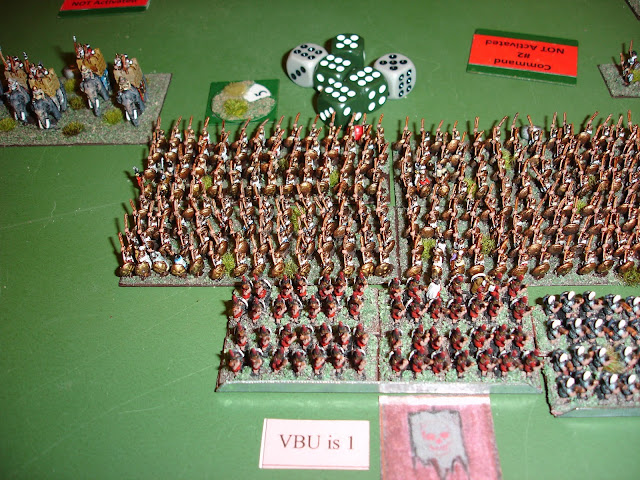 Clearly the earlier good command rolls had provided fake omens.
In following up Carthaginians get another five hits.

We had made a few mistakes mainly due to there being a mix of FoG, Basic Impetus and Impetus rules swirling around in our heads.  But for heavy foot, only one should have pursued. 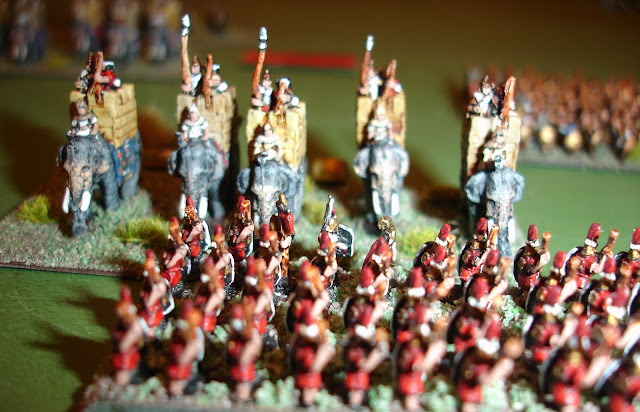 Then in come the elephants lead by the Carthaginian genius. 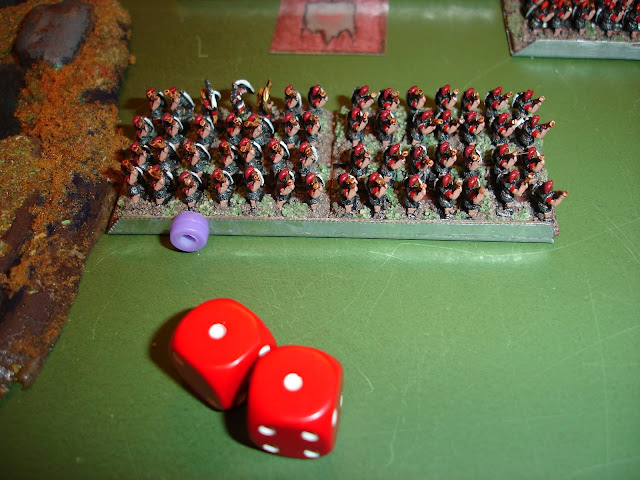 Well... The Gods move in mysterious ways, that's to be sure.
After destroying the elephants(which removes the Carthaginian genius CinC as well),
the successful Roman CinC is downgraded to Fair.

End of Turn Twelve now.
The Carthaginian cavalry command has finally broken.
The Romans have a line to defend their camp and left flank.
There are still plenty of Romans to face the Carthaginian infantry.
The battle is close as both sides are just a few off from breaking. 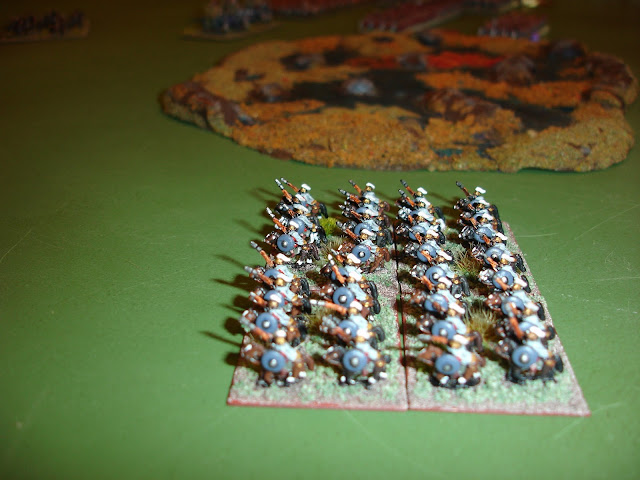 And the Roman cavalry on the left are making progress, if a bit slowly. 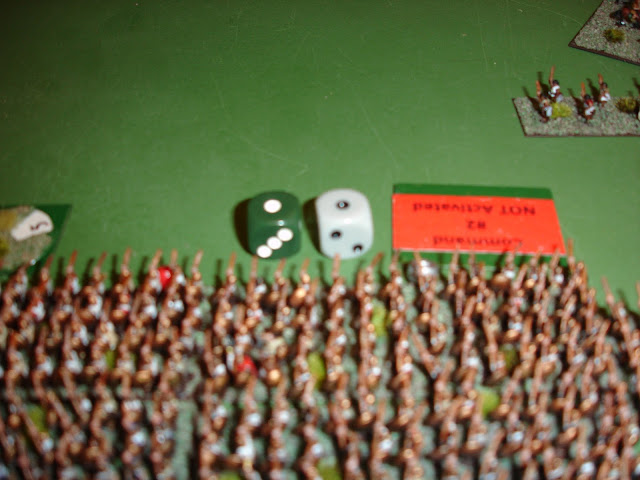 The Carthaginian infantry commander is downgraded.
But by now we know not to read too much into this.
It is a capital F for fake omen. 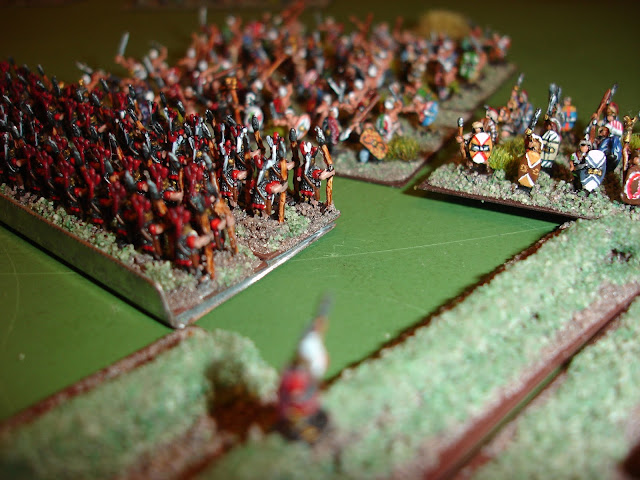 The Gauls contact the camp
(perhaps in contravention of the rules given the close proximity of the Roman infantry).
The camp survives. 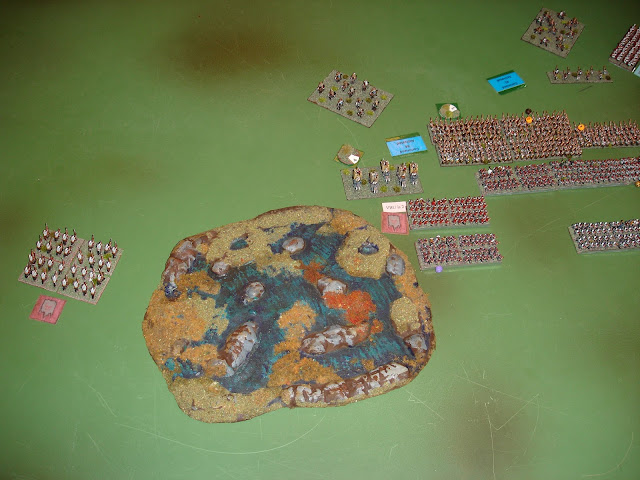 End of turn thirteen on the Roman left... 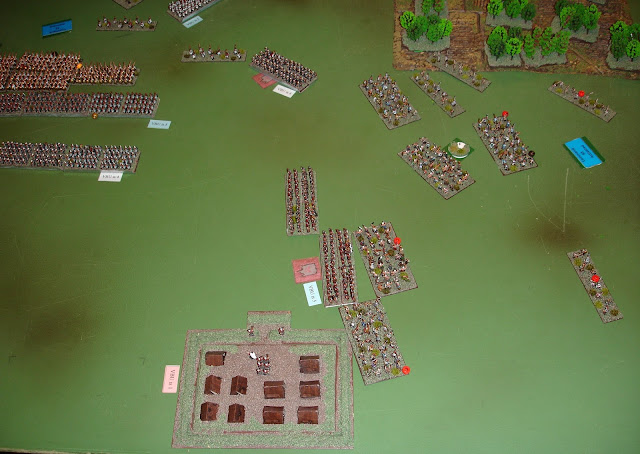 And on the Roman right.

But at the end of this unlucky turn, a second Roman command had broken which tipped the Roman army well over its breaking point. 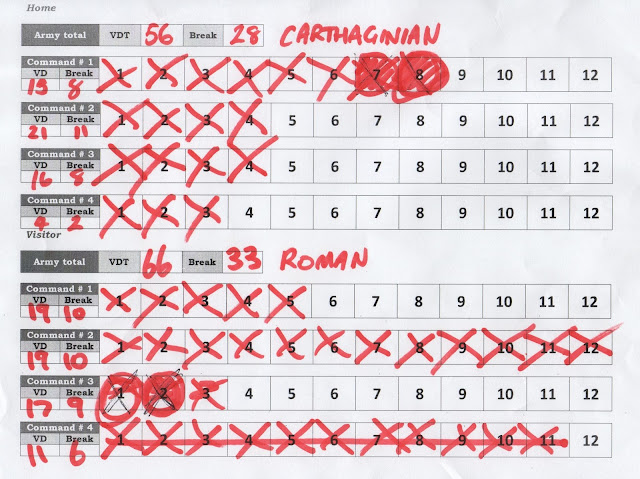 Just to unpack this a bit, Roman Command #1 was on the far left, Command #2 was on the right, Command #3 was on the left and Command #4 was the Italians on the far right.  Commands #4 and #2 were broken which took the level to 30 and the losses in the other commands meant the Romans were past their breakpoint.

The Carthaginians are a bit different.  Their Command #1 was the cavalry (which broke meaning a loss of 15 - the total VD for the command).  Command #2 was the infantry and Command #3 the Gauls.  The Carthaginian infantry, like the Romans, are worth 3 VD each, in contrast to the Gauls, expendable, worth only 1.  So Command #3 had lost four units while Command #2 had lost one plus a unit of skirmishers (1 point).  Command #4 was the elephants and the calculation is a bit off as a General was attached to one of the elephant units that would have taken its VD to 3, if such an attachment was allowed...

So a mighty Carthaginian win.

The Italians where perhaps badly placed to fight the impetuous Gauls in the woods, but so it goes.  The legion fighting the cavalry had a close time of it, but the other fighting was a bit subdued (the Roman left), certainly in comparison with the fighting on the Carthaginian left.

Again Impetus gives a good game, although it is a challenge with the rule variations/similarities with Basic Impetus which I've been playing of late.

Some extra "close-up" photos can be found in this post.
Posted by Sun of York at 3:47 PM