November 16th saw a continuation of the game with the allies in some confusion due to a change of commanders and lost notes, but all par for the course and might have even added a little historical accuracy into the game that would be hard to do by rules alone.

The French attacked von Ziethen on the Kreckwitz heights from three sides (at least). 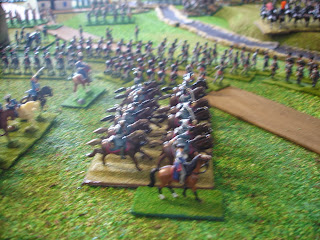 But my Dragoons were coming to the rescue.  (A slightly blurred photo, but I felt it does the situation justice).  My forces were very congested and I spent a lot of time shuffling them about to enable me to clear paths so I could move them (and which in turn lead to a bit of a discussion about unit density which I am keen to see how would be handled by Napoleon's Battles).

My Uhlans were beat up in a second fight but were able to pull back (or rather rallied at a safe point near Klein Bautzen, although how safe it was is questionable given that the French were just about to assault it).  The carp pond interfered equally to both sides by blocking attack opportunities as they presented. 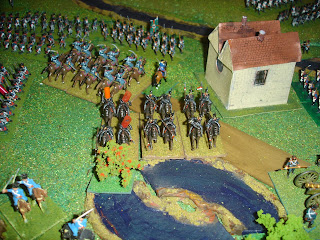 Sadly that was where I had to leave the game for the long drive home.

As they become available I will add in links to the ANF posts on the battle.  It is a massive undertaking to plan, organise and game such a battle and the ANF are to have congratulated for a sterling effort, which most importantly produced a fun game.  I consider myself privileged that I was able to participate and only regret I won’t be able to be there for the end.

Meanwhile here is one of James' photos as a taster. 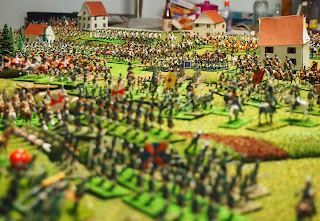 Here is the link to the main report on this game:
http://avonnapoleonicfellowship.blogspot.com.au/2013/12/battle-of-bautzen-2021-may-1813-day-two.html