It is amazing how quickly the game moves when there is bad weather... 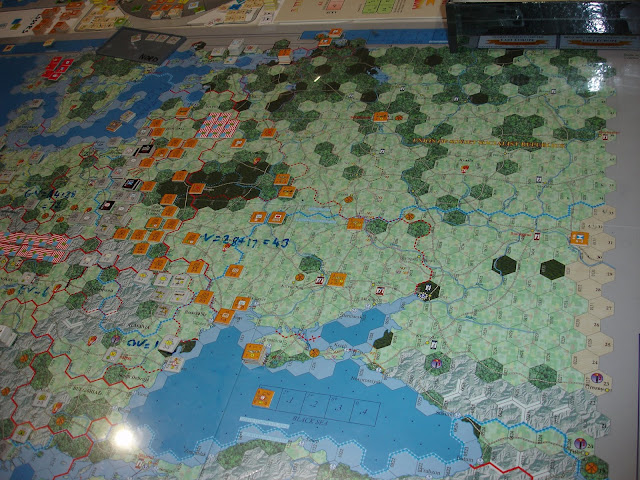 Germany has aligned Hungary and Romania.
The weather has been blizzards and storm and so both sides are struggling to redeploy. 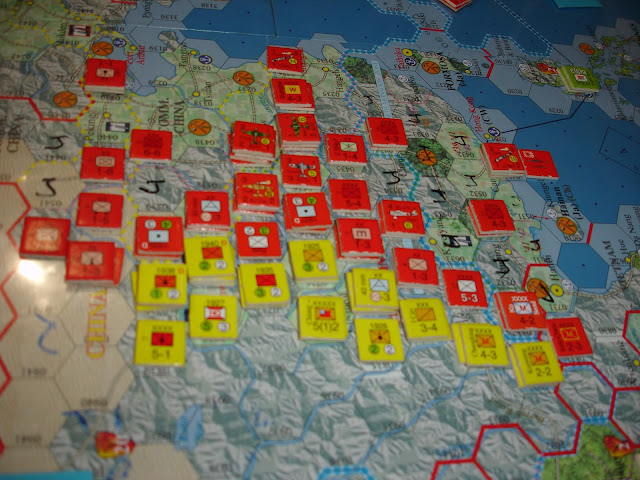 The rotten weather has allowed the Chinese to safely pull back,
but they are now on their last line of defence. 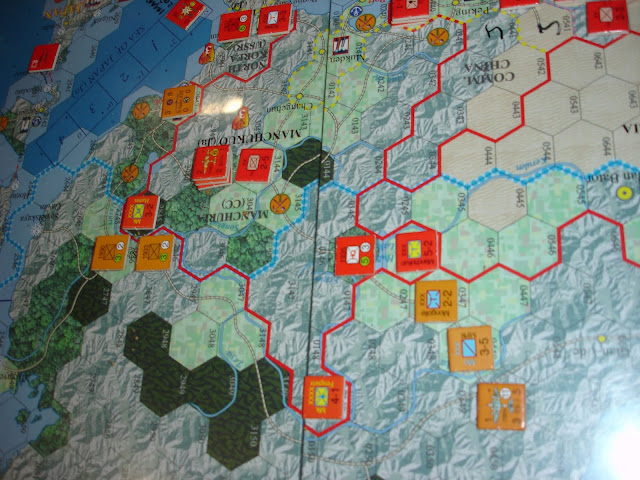 More interesting (in terms of opportunities to do something)
is the situation in Far East USSR where the Japanese are getting ready to attack.


Michael, who hosts the game, does a much more detailed write up that is posted to the Face Book World in Flames Group.  This is what he wrote for this session:

"N/D 40 – J/F 41 The night started with the final impulses of 1940. With little to do, and bad weather the CMWLTH took a combined sailed some more convoys and attempted to GS the OOS Italians in N Africa from its CVs operating in the W Med. No results, but with the ‘lucky’ weather die roll of snow in the Med the Greek Mtn Corps in a last act of revenge for the loss of Athens overran a GER LND destroying the ACFT and killing the pilots – Goring was furious and demanded a ‘please explain’ from the Army commanders who were supposedly responsible for airfield security – an unnecessary loss – more counselling required. The Russians, sensing that the GERM build up on their borders was more than an ‘exercise’ have started to pull a number of key units (MECH) away from the Polish border, further East. No Allied EOT Roll, giving the Axis a valuable extra impulse. Germ chancing a high EOT roll (8) elected a combined and searched the Faeroes Gap conv lanes sailing the old pre-dreadnought Schleswig Holstein, and with what has been a rough time for the CMWLTH, she found with the help of a sub in a high box and a reasonable split sinking 3 CONV and aborting 3 others leaving only 4 left to supply the UK. A second search attempt, to severe the lines completely, saw a reverse and a large split go against the GERM (which surprised both the CMWLTH and GER) and in a violent retribution the sub was sunk as was the venerable Schleswig Holstein which had triggered the search – medals to valiant, as the turn ended. Only bonus to the Allies was they did roll to end the turn, which would have seen the initiative track gain a +1 to the Axis. It remains in the zero box rather than +1 Axis which is important with OP Barbarossa looming. EOT saw a partisan turn up in France with a roll of a 1 as there were 14 garrison points – unlucky, as it now sits on a resource, denying it to the GERM. Greece surrenders and the US finally wakes up and sends the beleaguered British 50 old, but most welcome WW1 destroyers. This creates tension in the US and there are now 7 chits in each of the pools and two in each tension pool, America is awakening. Builds and reinforcements – CMWLTH build is down due to only 4 resources arriving in the UK – this EOT roll against the convoy system always hurts the CMWLTH when it is successful. China with the loss of its Capital Chungking is down to 2 builds. Italy started to build roads in N Africa to connect East and West using local ‘labour’. Churchill (the Brit Player) announces that he wants a short bad weather turn in J/F 41 – a request to the weather Gods. J/F 41 – Axis finally wins an initiative, first for a long time, and promptly hands it to the Allies who go first. Weather is very bad, Blizzard in the Temp and advances by two, and the CMWTH takes its mandatory Naval, sailing escorts and convoys to re-establish and protect its convoy lanes. ACFT from both sides react into the W Med to search for the Italian conv supplying N Africa and the it is found by a French sub patrolling the sea zone. She sails a small fleet to hunt the single SCS in the Bay of Biscay – no find. Russia continues to pull back away from the Polish border as it is getting too dangerous to remain so close to that border as they seek to husband their quality units, China, delighted about going first, steps back into the mountains and double/triple stacks the Communist Chinese and settles in for the winter. Axis impulse sees a Naval for the Italian as it contest both the W and E Med now that the distraction of the Greek campaign is over, it sails it’s sub fleet and fails to find the British Convs but the escorts find and sink the French sub in the W Med where it had been menacing Italian convs. GERM announces the alignment of Rumanian, and the slightly awakened US Senate interest is peaked as he rolls a 2 and gives the US a late Christmas present – a 41 Chit. GERM took a combined and sailed the Nord fleet (5 ships incl the Bismarck) into the 4 box off the Bay of Biscay to search for several British ships that were hunting its comrade, but failed to find. The GERM Raider operating out of Panama sails into the Pacific hunting British convs but failed to find with the Aust – Canada chain remaining intact. The Japanese, taking a no cost land (saving oil) started to send land and air units North to the Sino-Russian border and establish a containment line along the Chinese/Japanese front line, while it sets up to support the GERM Op Barbarossa. Second Allied impulse sees Churchill gets his wish, roll of a 10 +1 (11) BLIZZARD everywhere and advanced by 3! China does nothing – Russia continues to withdraw MECH units towards the new expanded Romanian/Russia border – the garrison value is now 99 GERM v 46 Russia. CMWLTH takes a Naval and sails its 7 battleships led by Nelson and Rodney to hunt the Nord fleet – bad weather aided by poor rolling – both sides rolling their not-so-favourite 7’s, see both fleets missing each other. The Dutch sub patrolling off the Italian coast searched but was instead found and sunk by the Italian escorts. Axis 2nd imp next week will see Hungary aligned and not much else, although the GERM may well consider bailing from the Bay of Biscay as 7 British Battleships tend to focus a GERM Admirals attention and it is a fight they can not win, even if the roll well. Japan will take a land and ship more land units North with Italy a combined to again search for CMWLTH convs"
Posted by Sun of York at 5:14 PM