An excellent post was made in the Yahoo Group by Charles MacKay and can be found here: https://groups.yahoo.com/neo/groups/napsbattles/conversations/messages/18471

Something from this post which would have impacted my previous game is this: "The archival and published French memoirs, the best by Junot’s chief of staff Paul Theibault, all mentioned the nearly impassible terrain on the western side of the ravine called the Toledo Creek or River. It, too, was dry but it was the combination of thick briars and thickets with the steep slopes that made an attack between Vimeiro and Ventosa almost impossible."

From this article, http://www.napoleon-series.org/military/virtual/c_vimeiro.html, I found a start time for the action: "The battle began about 9:00 a.m. when General Junot sent Charlot's and Thomière's Brigades, along with seven guns, to attack the British on the ridgeline near Vimeiro."

So my second game was to look at the timings to get this to occur.

I also adjusted the Allied deployment to fit in with the excellent map on the Napoleon Series web site (http://www.napoleon-series.org/images/military/maps/peninsula/vimeiro.jpg).  If you look closely it gives the starting positions and the subsequent redeployments by Wellesley.

Allied deployment, brigades from their left to right Fane (16BrLT) and Anstruther (20BrLN) in line on Vimeiro hill with the 20th LD behind them (and who don't really fit and are possibly best left out as they will only get in the way); Trant (16PtLN) is in the village of Maceira (occupying, but not deployed); Ferguson (20BrLN), Bowes (16BrLN), Nightingale (12BrLN), Acland (12BrLN), Craufurd (16BrLN) and Hill (20BrLN). 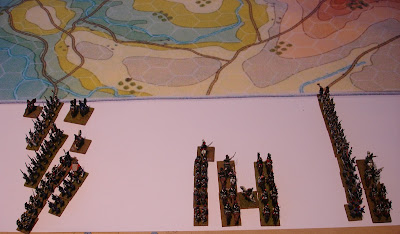 The original Blue Book scenario has the game starting at 7:30 but I now consider that to be the time Junot left "a small village 5km to the south of Vimeiro" as this allows Brenier's outflanking force to peel off taking the right fork in the road and Thomiere (the rest of Delaborde's division) to lead the main French body (Loison's division) onto the field at 8:00.  Kellerman and the remaining cavalry enter at 8:30 on the next road along while Brenier enters at 8:00 (although see later comment). 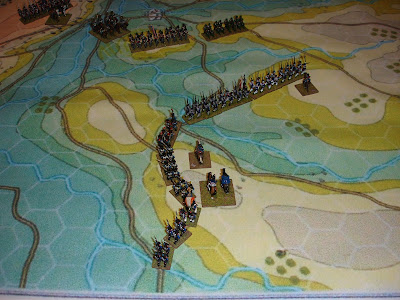 An 18" march move will get the French just before the Vimeiro Hills.

Turn 2 (8:30) and Thomiers and Charlot have deployed (using my rule variation that allows a unit in march column to nominate a base and change its orientation (facing) for the unit to position itself around.  Solignac's brigade has moved up and Kellerman and the remaining cavalry is also on the battlefield while Brenier has commenced the outflanking move.  Interestingly the first part of Brenier's march is shielded from the allies by the terrain, but it created a lot of dust so Wellesley knew what was happening.

Thomier attacks at 9:00.  Junot has deployed Soliganc, but is eager for Brenier to arrive.  The outflanking force has now reached Ameira Grande (I'm tempted to make this the entry point for this force) 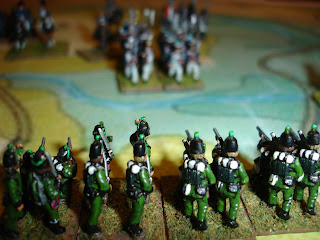 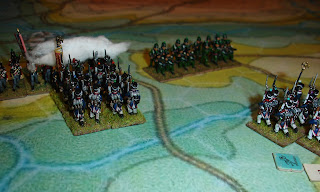 9:30 and Charlot attacks with more success.  Previous French fire has disordered Anstruther who is forced to withdraw from the close combat, suffering heavy losses in the process.  I probably need to provide free rolls. 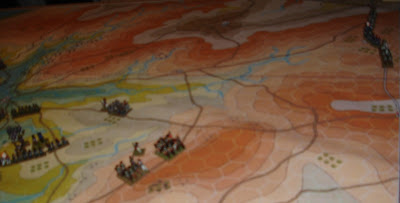 End of the 9:30 term (I want to make a reference here about the level of Junot's intoxication to explain this picture being out of focus). 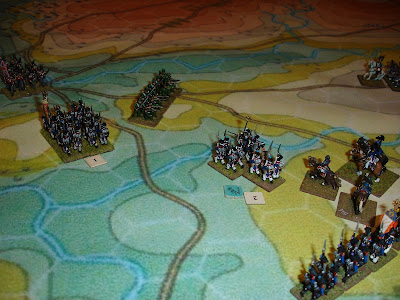 10:00 and Kellerman is about to attack.  Junot has decided to get Solignac back into march column and send him off to find Brenier.  Charlot on Vimeiro Hill pours fire into Anstruther's brigade that has managed to rally, inflicting the necessary casualties to cause it to disperse.  (It started 20 strong, took 2 in fire combat prior to close combat, took 1 in close combat and then 5 withdrawing, took 2 the next fire combat phase and then another 2 and that was it...  Very unlucky as it had bonuses for being in line and fired at by column and then when in Vimeiro it counted as being in cover, although it wasn't deployed).  That disaster balanced out Kellerman's rout and death...

At this stage I'd learnt enough and I also hadn't been moving the Allies so I called it quits.

It is a tough call trying to force oneself to do what Junot did historically.

As both the French and the allies have to make some formation changes (respectively: out of march column and from line into column so they can redeploy) in what is difficult terrain I felt some more flexibility was required.  I've covered these in my earlier post, but added a bit more as well.

Changing formation in rough terrain into line causes disorder, but not into other formations.

I also continued the new optional rule for fire combat between line and column formations.

Fire modifier for infantry in column firing at infantry unit in line is a -1.

Nothing radical there, but more interesting could be allowing infantry in line to fire out of both arcs.  Also allow an infantry unit  to fire if disordered, but with a -3.  It gets tricky when you then consider whether this should apply to artillery and also in various situations, such as firing on the flank.

I would also give each side 4 free rolls, one for each four turn segment or part there of plus one for being good commanders.

Another thing to try is not to have the Allied cavalry, but allow them to convert the first French withdrawal into a rout, assuming that a French unit has not already routed.

Some further research now has me thinking I have too much French infantry.  Removing the 58th and 70th units gives a much better match up with Oman's figures as given in the Osprey books (rather than the July figures I was using).  It also makes it very much more a brigade level game.

While I need to bring all this material into one scenario listing, I now have enough to feel confident to inflict it on my fellow gamers.