With appropriate apologies to people and organisations I will unfortunately miss out, I would like to acknowledge the following contributors to the Waterloo 2015 in 15mm game put on by the NWS.

First up, Carlo, president of the NWS, for encouraging me to put on the Waterloo 2015 in 15mm game and for subsequently taking the running with organising the NWS Waterloo day.

Mark B for helping me with the map and labels and for taking on the role of Napoleon and taking lots of photos (they can be seen here: http://napoleonicwargamingsociety.blogspot.com.au/2015/06/lots-of-pictures-of-waterloo-2015-in.html).  The map was sourced from the The Unofficial Napoleon's Battles Group and credited to Alfonso Peral, although I did splash a bit of paint on it.

Stephen N for helping with various charts, the set-up and support, as well as taking on the role of Wellington and subsequently putting up with me correcting his moves.

Martin S for providing me with access to his Napoleonic figures.

David B for providing me with access to his Napoleonic figures and for taking on the role of Blucher.

Myron in Clare, South Australia for sending me some of his figures to fill in the gaps.

Richard C for being a back-up source of figures and taking on the role of Ney.

Mark W for providing the superbly painted Scots Greys and taking on the role of Picton and for bravely continuing on in the face of horrendous die rolls.

Stephen B for helping with set up and pack up and taking on the roll of Hill.

Graham A for taking on the role of Reille.

Darren T for providing the input for the artillery templates and taking on the role of Uxbridge although sadly being unable to make it on the day.

Simon C for making the fantastic buildings that added a third dimension to an otherwise fairly flat battlefield.

James F of the ANF for providing access to their research and for travelling down to join in as Lobau and helping with the packing up.  Plus his report of the affair on the ANF blog which can be seen here along with some of the photos he took (there are more to come): http://avonnapoleonicfellowship.blogspot.com.au/2015/06/wargaming-waterloo-1815-2015-9-waterloo.html

Mark of the ANF for joining us and patiently taking on the role of von Bulow.  I feel bad that we had to end just as he was about to get into action.

Javi and Antonio for providing me with insights from the coming Marechal Edition of Napoleon's Battles.

Mark Adkin for the inspiration I found in his book "The Waterloo Companion".

The North Perth Bowls and Recreation Club for the use of their venue and making us feel welcome.

The various people who have left encouraging comments on the posts I have made about the progress of Waterloo 2015 in 15mm - comments much appreciated.

The helpers that made the Waterloo Day such a success and the visitors who showed an interest, especially my partner and daughter for coming by.

And finally to Liz for making this neat picture: 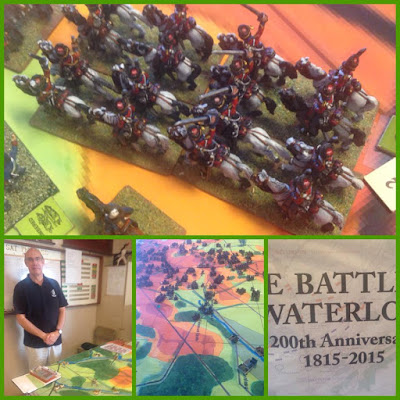