My First Game of Impetus

Thanks to Carlo for organising this game and for letting us all use his excellent miniatures.

Impetus had been on my to do list for some time (although given the age of some of the items on that list, I should really say that it has only recently been added).  If I recall correctly I first became aware of the rules when I saw a post featuring some Romans beautifully presented on a big base (I went looking for the post but it is sadly lost in the world of blogs).

Carlo, with a few games under his belt, umpired.  He was also assisted by James of the ANF who, I think, was specially brought in for his expertise and to lead the Romans along with Stephen B who was, I am pretty sure, having his first game with these rules.  For the Persians there was Steve and myself - our first games as well.

I had read the basic rules and this helped me a bit.

Being new to the rules, and also asking tricky questions, slowed the game down and gave me concerns over picking up the complexities of new rules.  We also called on the help of some other experienced players in the club to resolve questions and also uncovered some clarifications and alternative variations - things that make for true Ancient wargaming rules!

Rolling sixes seems to be important and Steve and I managed this a few times, only to see our attacks fail when our opponent rolled a one (repeatedly) on their cohesion tests.  This still meant they were being attrited to death.

The look of the game was good and the feel okay, given it was first time and all.  I am very fond of Field of Glory and so will have to play a bit more to see if I would want to swap over to them.

We played in 28mm and my preferred scale is 15mm.  Also we had, like with the previous week's game of Fire and Fury, a minor calculation to do to adapt the rules to 28mm and that taxed the grey matter at times.

Here are a few photos and there are more on the NWS blog.

My command, attached to a unit of Pushtigban (whatever, they have a VBU of 7). 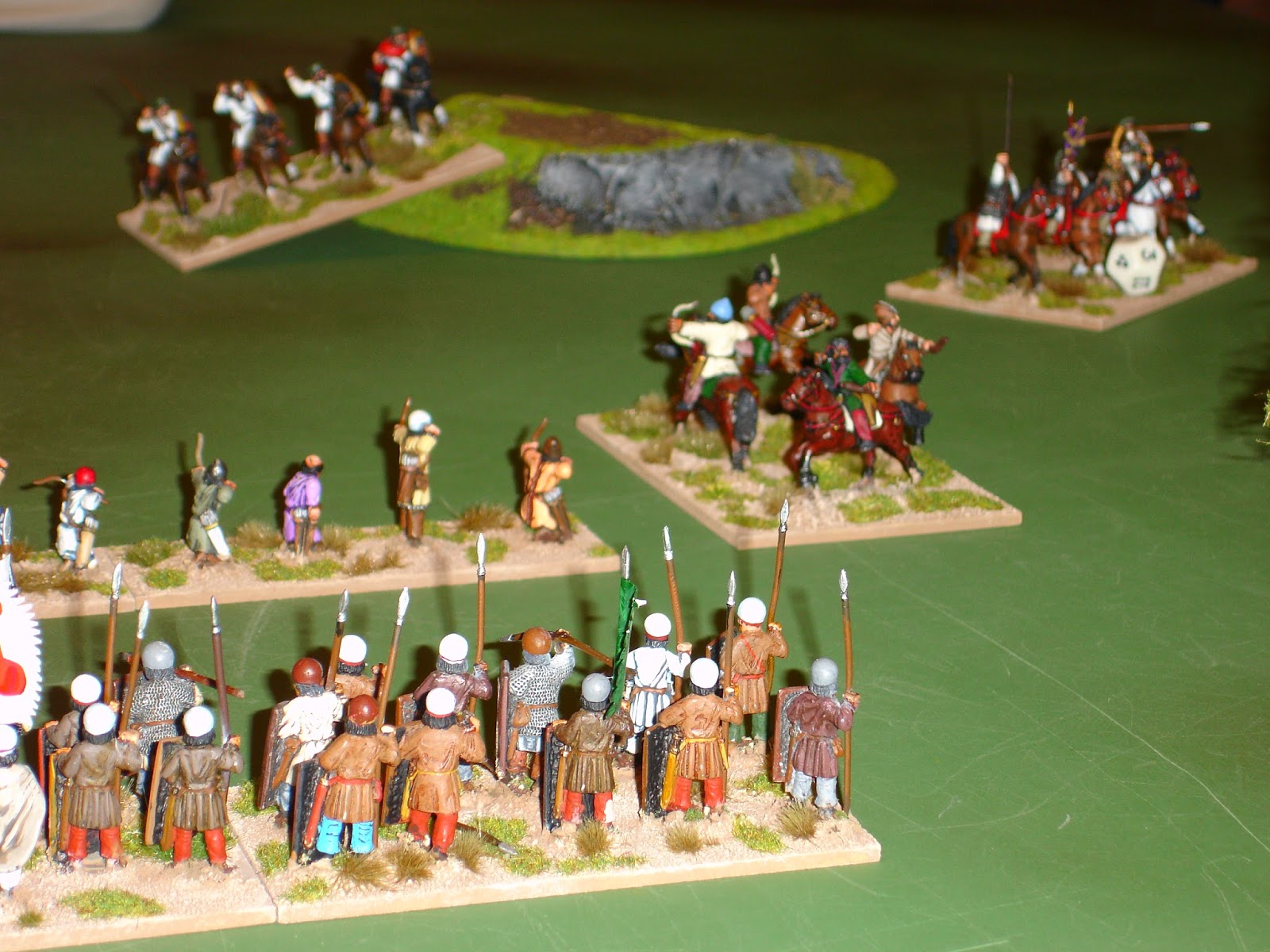 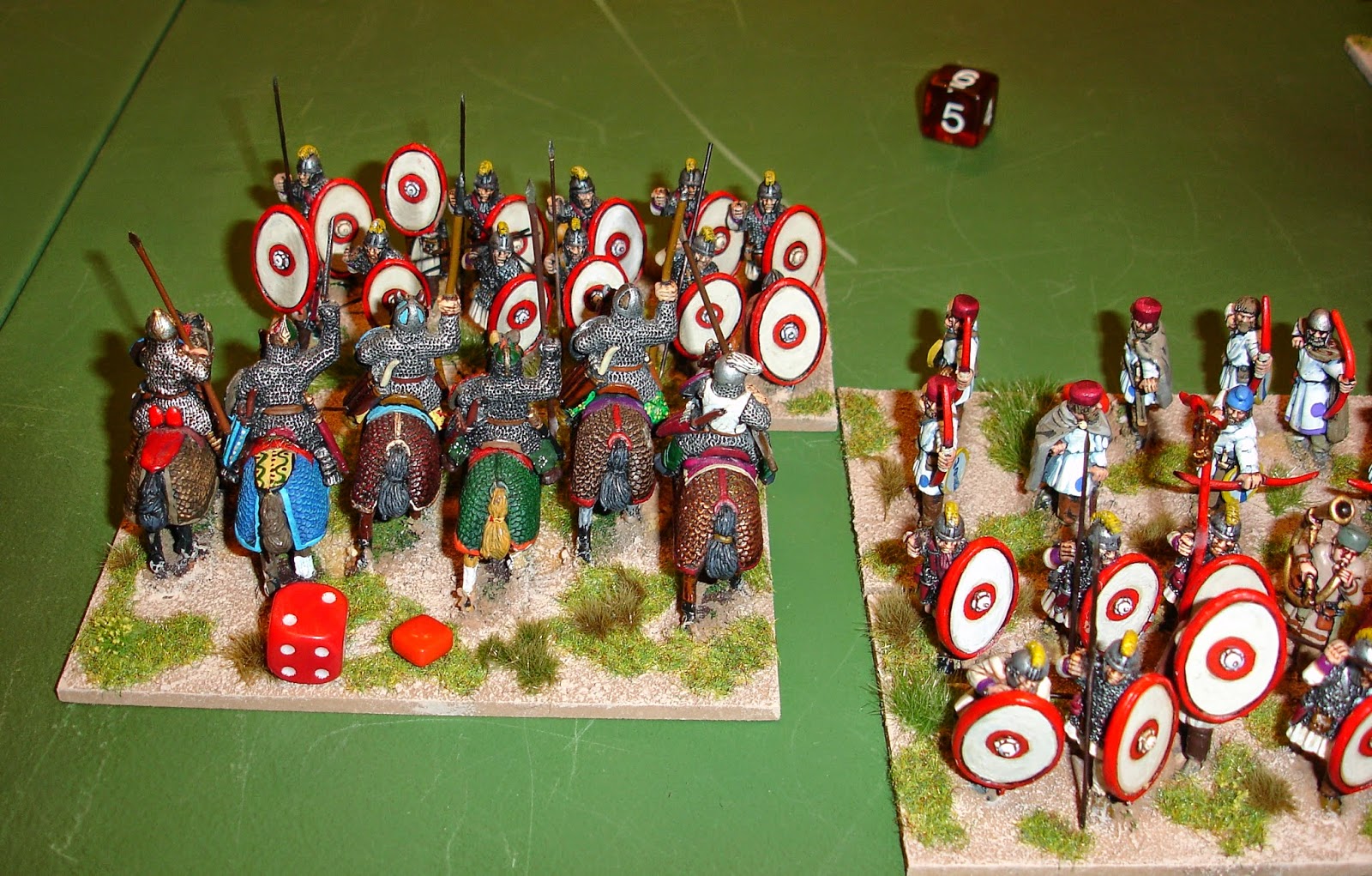 One of my units of heavy cavalry charged, even though I didn't get the Impetus bonus, I did throw three sixes and the Romans fell back.  I followed up. threw just one six this time, but the Romans also got a hit in, I survived and pushed them back again, but then they got lucky and threw more sixes than me and the attack stalled.  The Romans had been eaten away however and were one loss away from disintegrating. 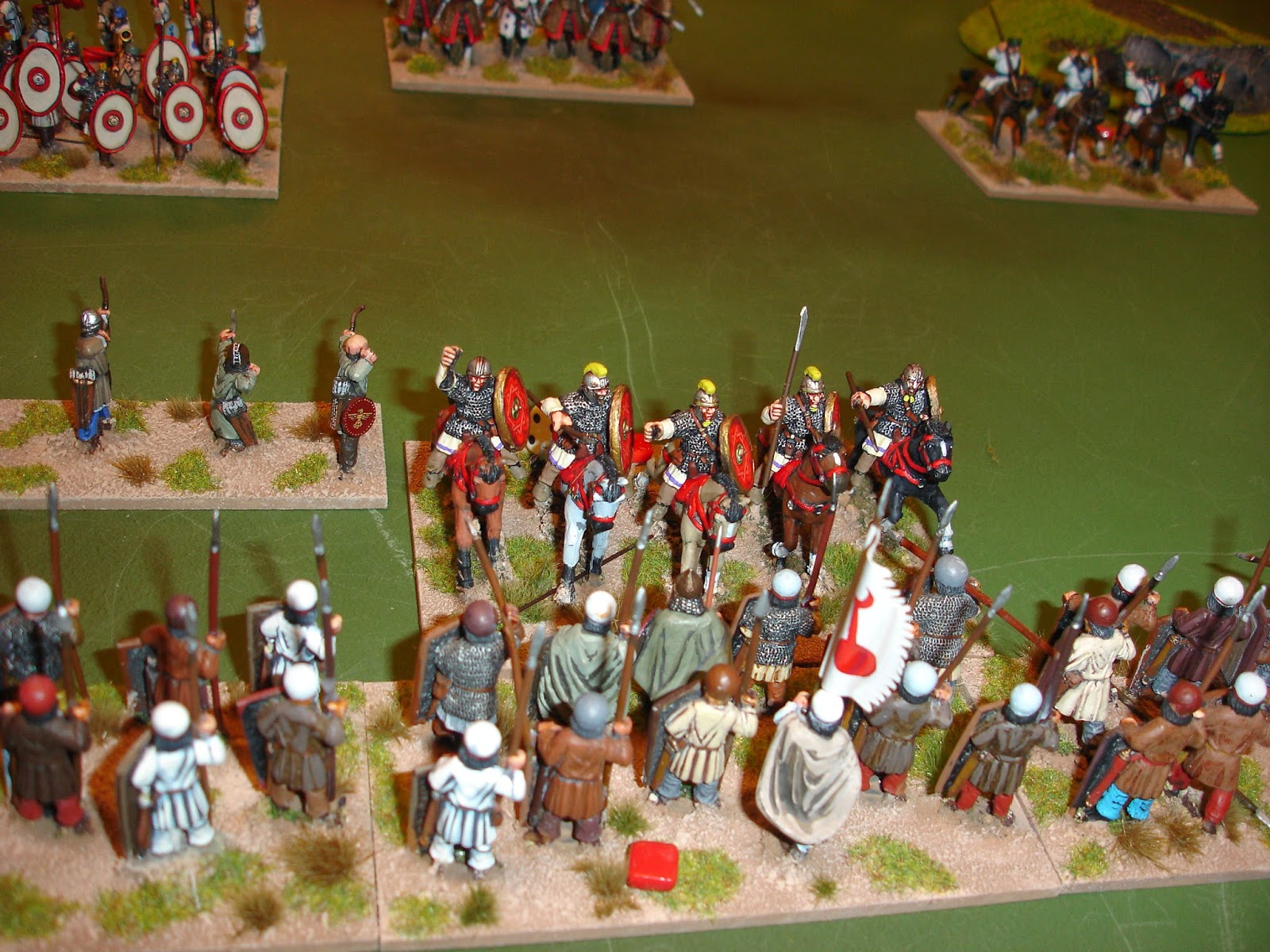 My militia got the drop on some Roman cavalry.  It started well, but went down hill when they were unable to follow up their initial die rolling success.

My immediate reaction on the night was that the mechanics rewarded lucky generals, but now having had time to reflect, they produce a plausible narrative.  Sometimes nothing happened, sometimes units broke on first contact, and sometimes melees went on and on and on.

The ultimate question for me comes down to just how many rules/periods I can manage.  I suppose that ultimately depends on availability of opponents and convenience of setting up games.