Today Mark W and I played a game of Field of Glory.  This time I botched up some extra pike blocks and ran Pyrrhic against Mark's historical Romans.

From the Pyrrhic left looking back across their lines.

From the Pyrrhic left looking towards the Romans who were quick to seize an enclosed field.

From the Roman right showing the Pyrrhic centre emerging from a village. 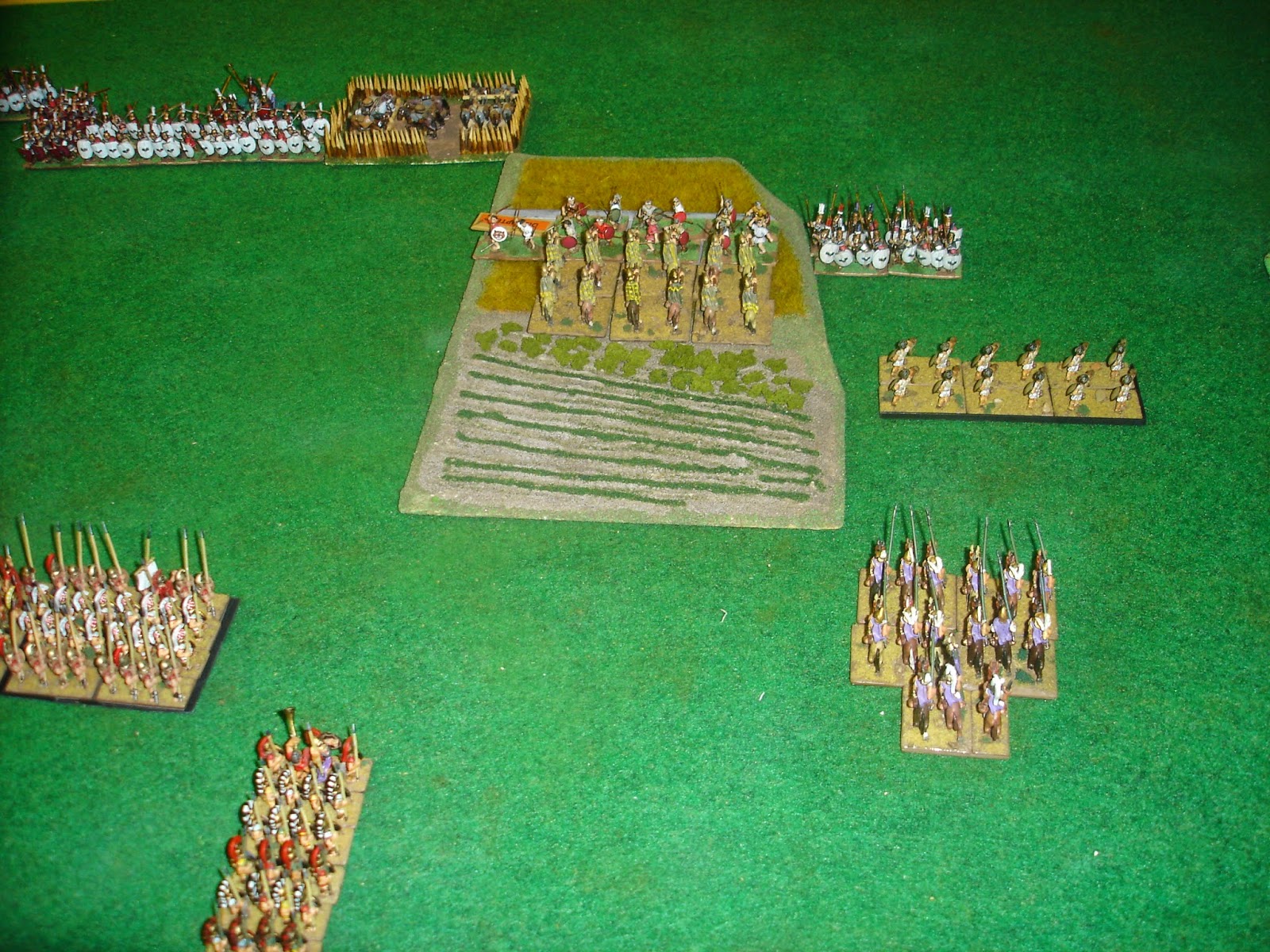 Action starts on the Pyrrhic right when their light cavalry charge two small units of Roman skirmishers who thought they would stand. 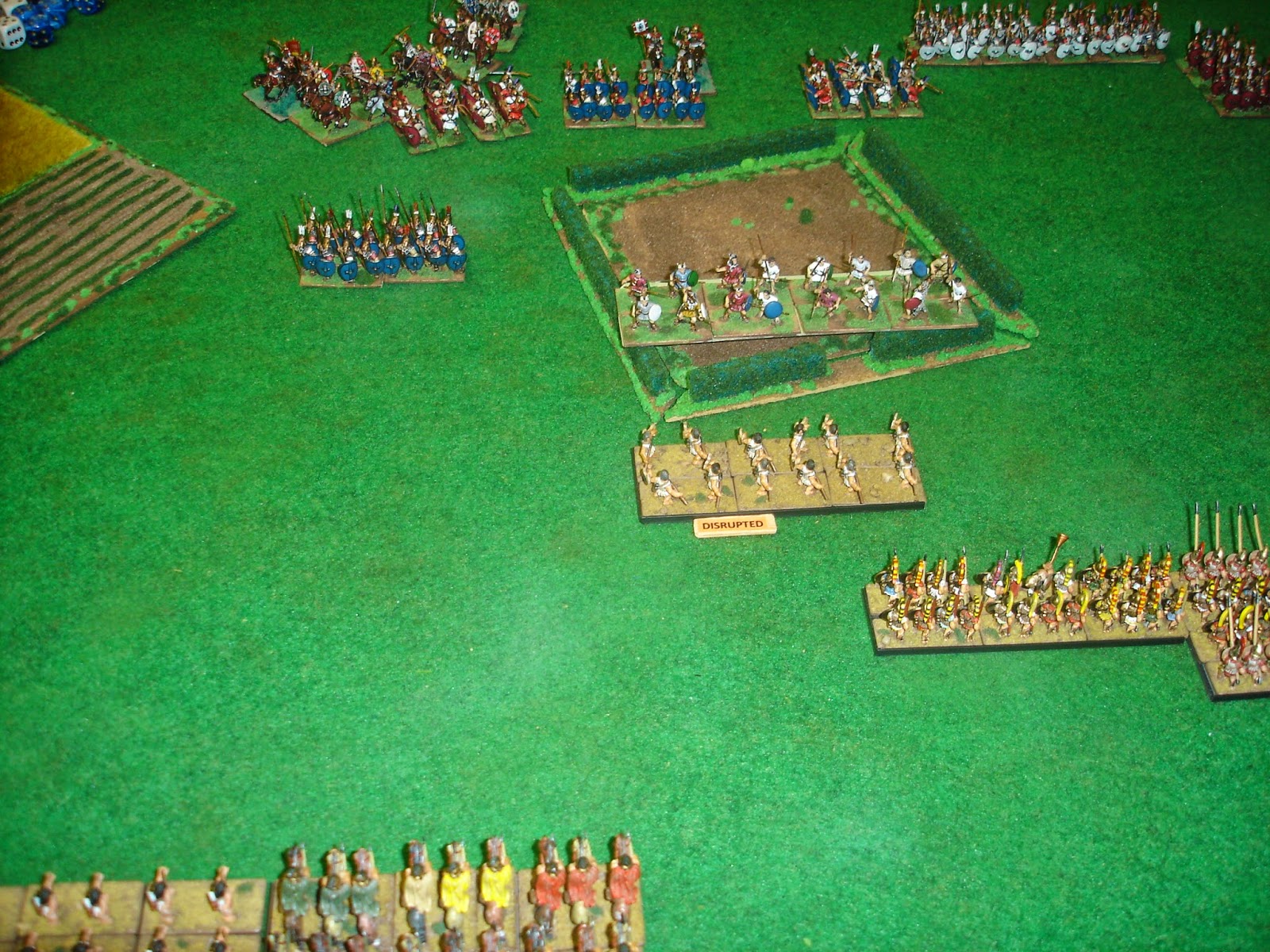 The Pyrrhic javelinmen sent to clear the enclosed field get nervous after coming under fire. 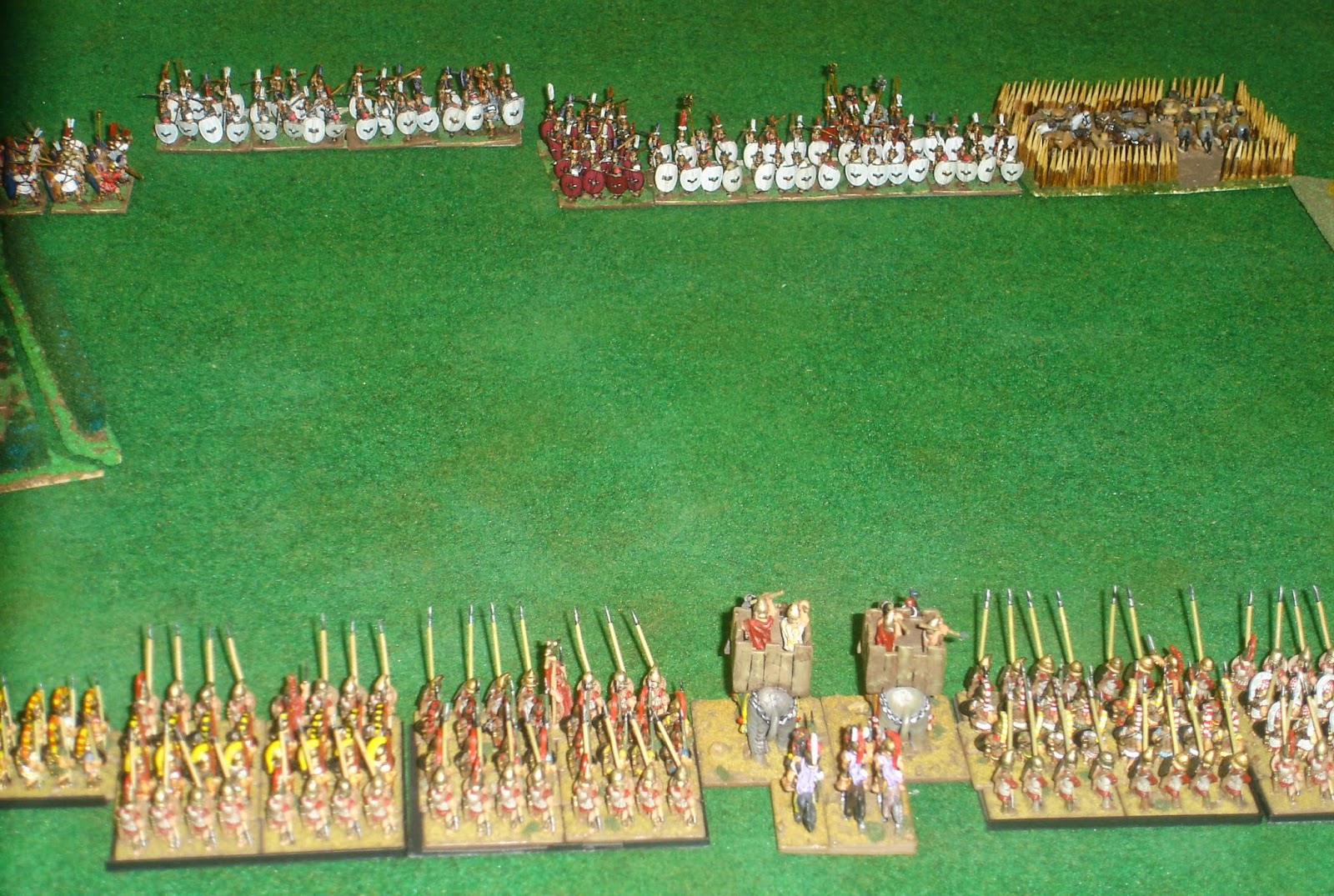 Pyrrhos hurries up his troops. 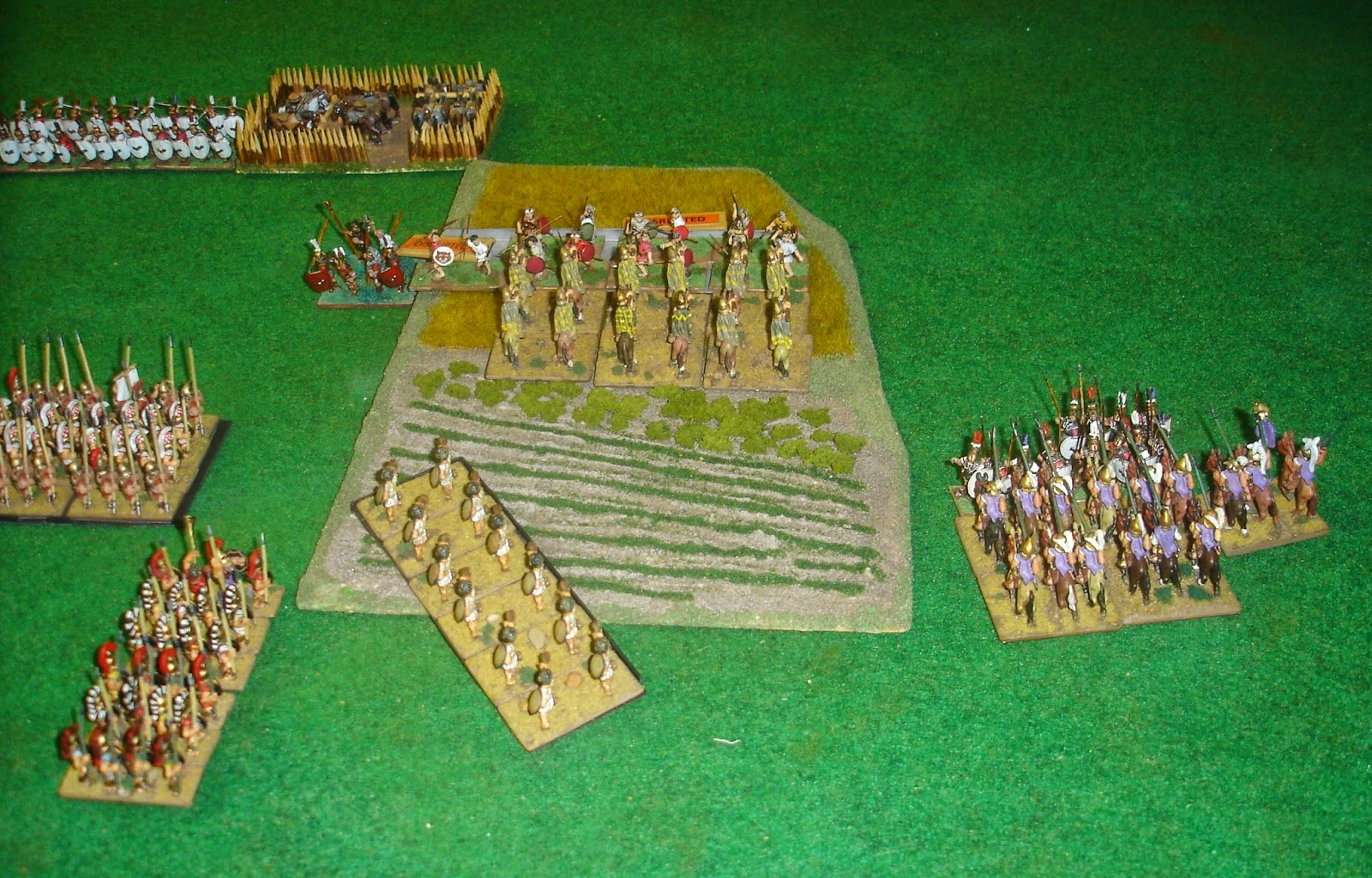 The Pyrrhic light cavalry have some excellent dice rolls, their Roman opponents distinctly less than excellent.  Some elite Romans come to grips with the Xystophoroi. 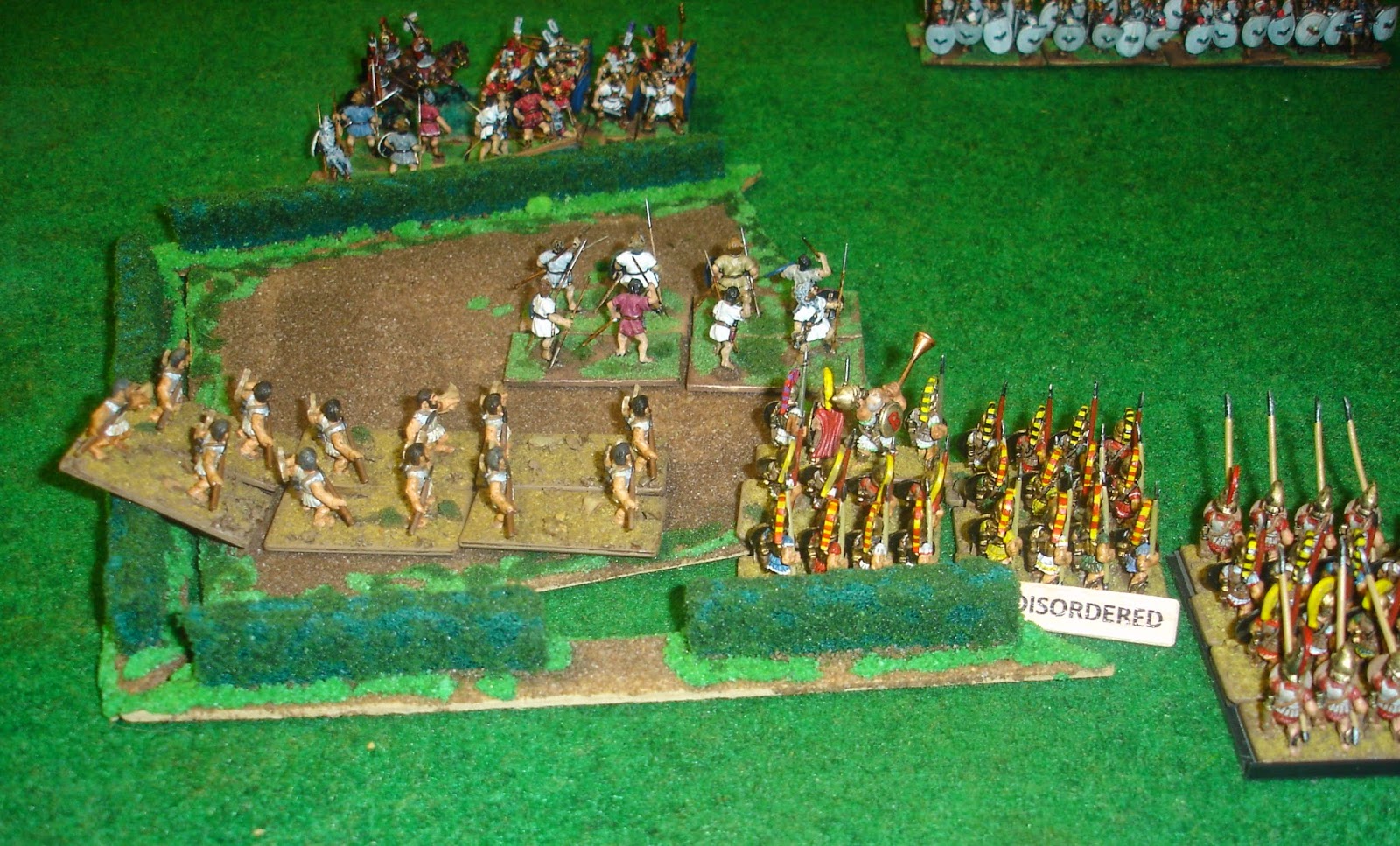 And we are into the field!  It is messy going, but left flank of the pikes is now secured. 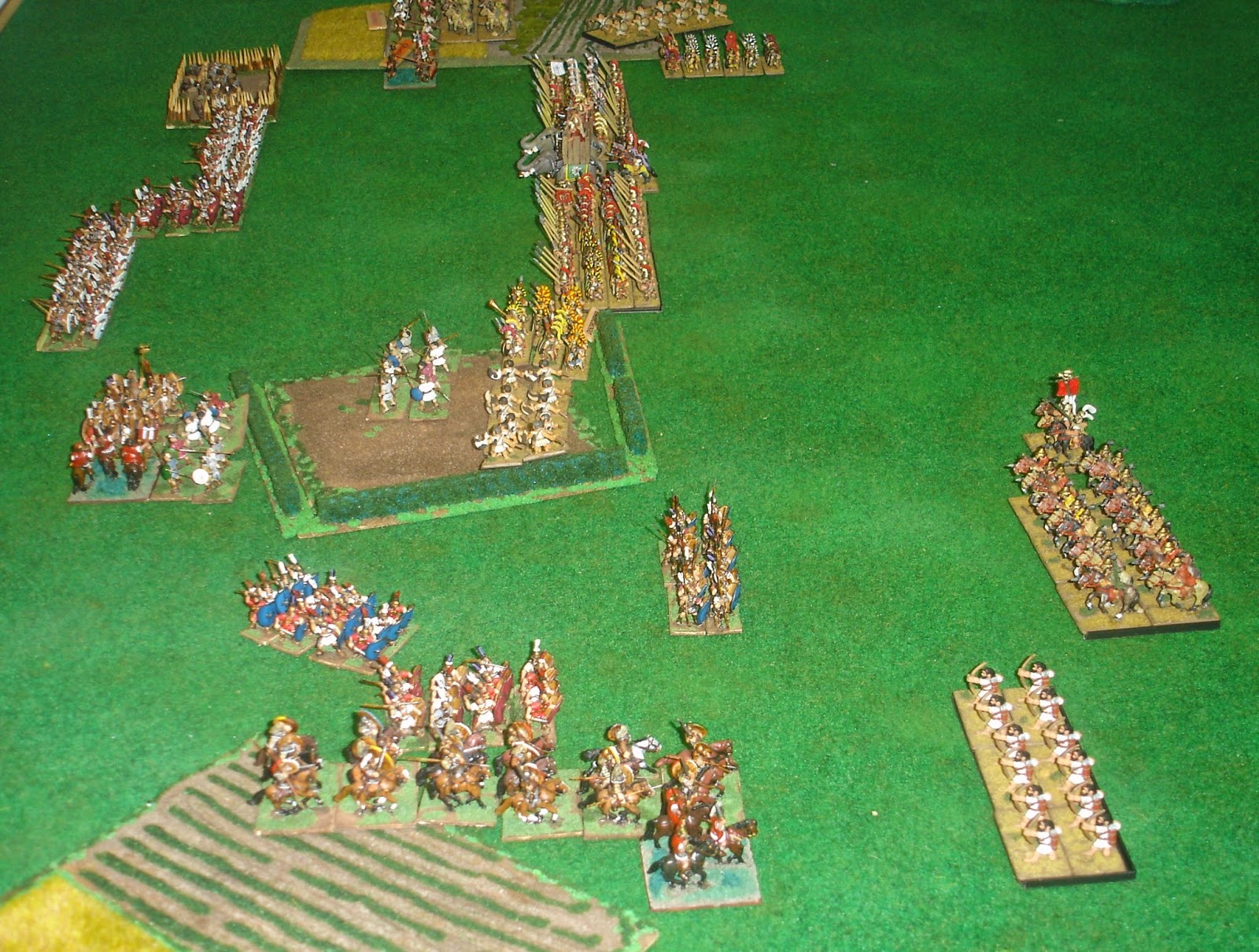 The Romans have gone on  along flank attack on their right.  Some Pyrrhic archers are their to hold them up supported by some heavy cavalry. 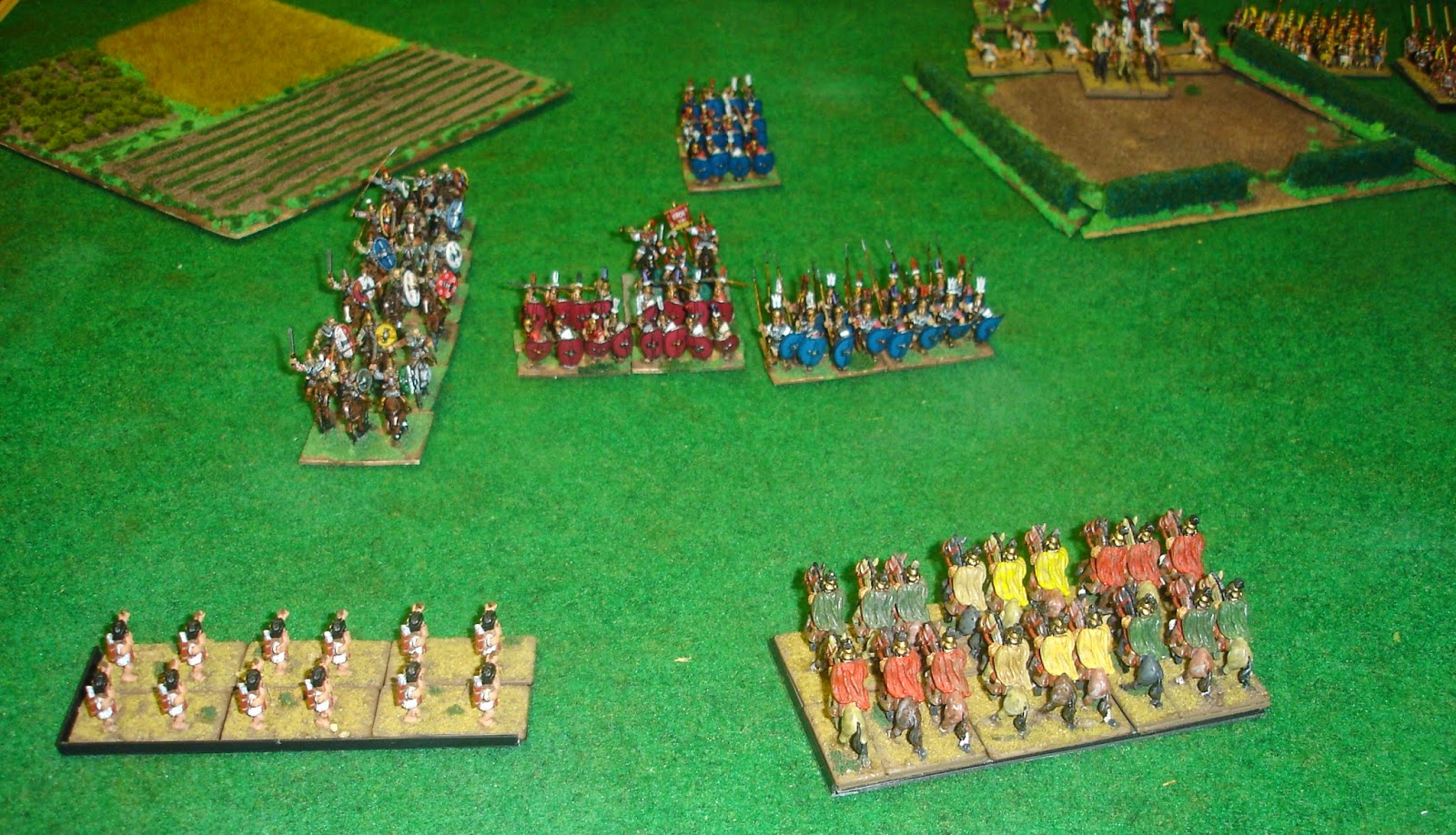 And hold them up they did, although they were lucky (for a long time...)

Enclosed field has been captured, but the Greek Hoplites covering the flank of the pikes are still a bit disordered.

The elephants don't hold back and race ahead to squish the Romans. 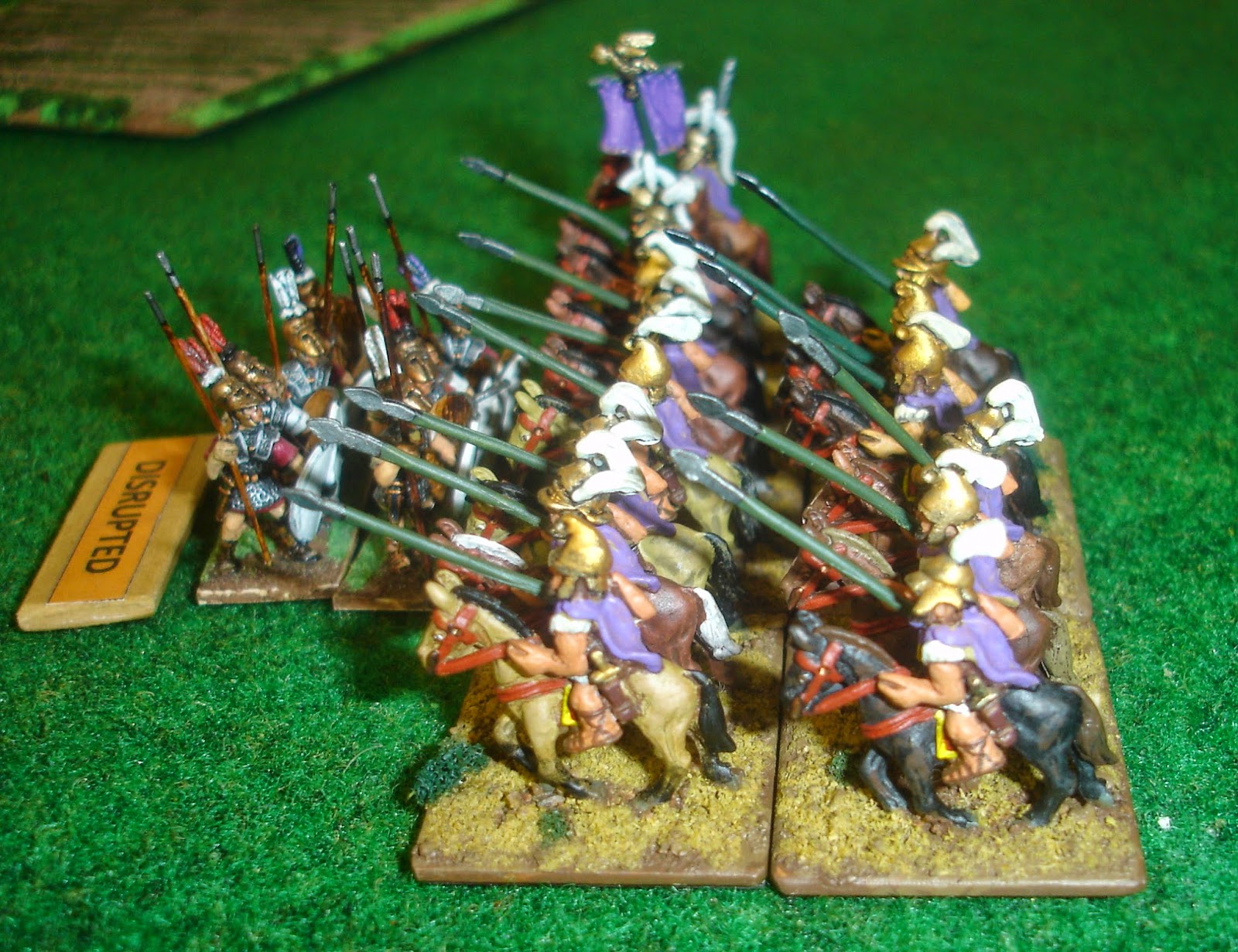 After at least three charges the Xystophoroi's superior dice rolling has the Roman elites whittled down. 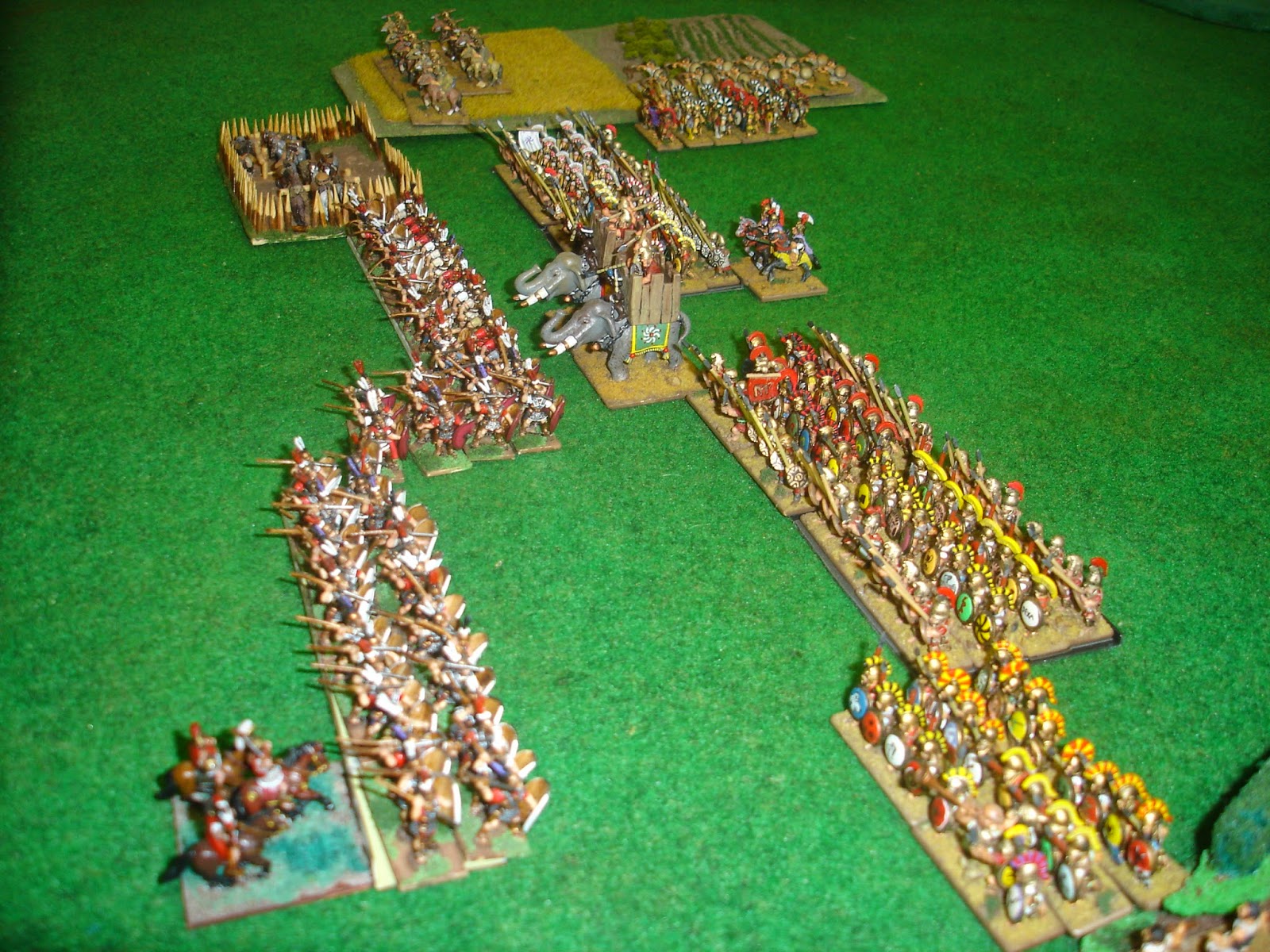 With both flanks secure the pikes close for the kill.  The hoplites on their left want in on the action rush forward (even though they were told to hold back). 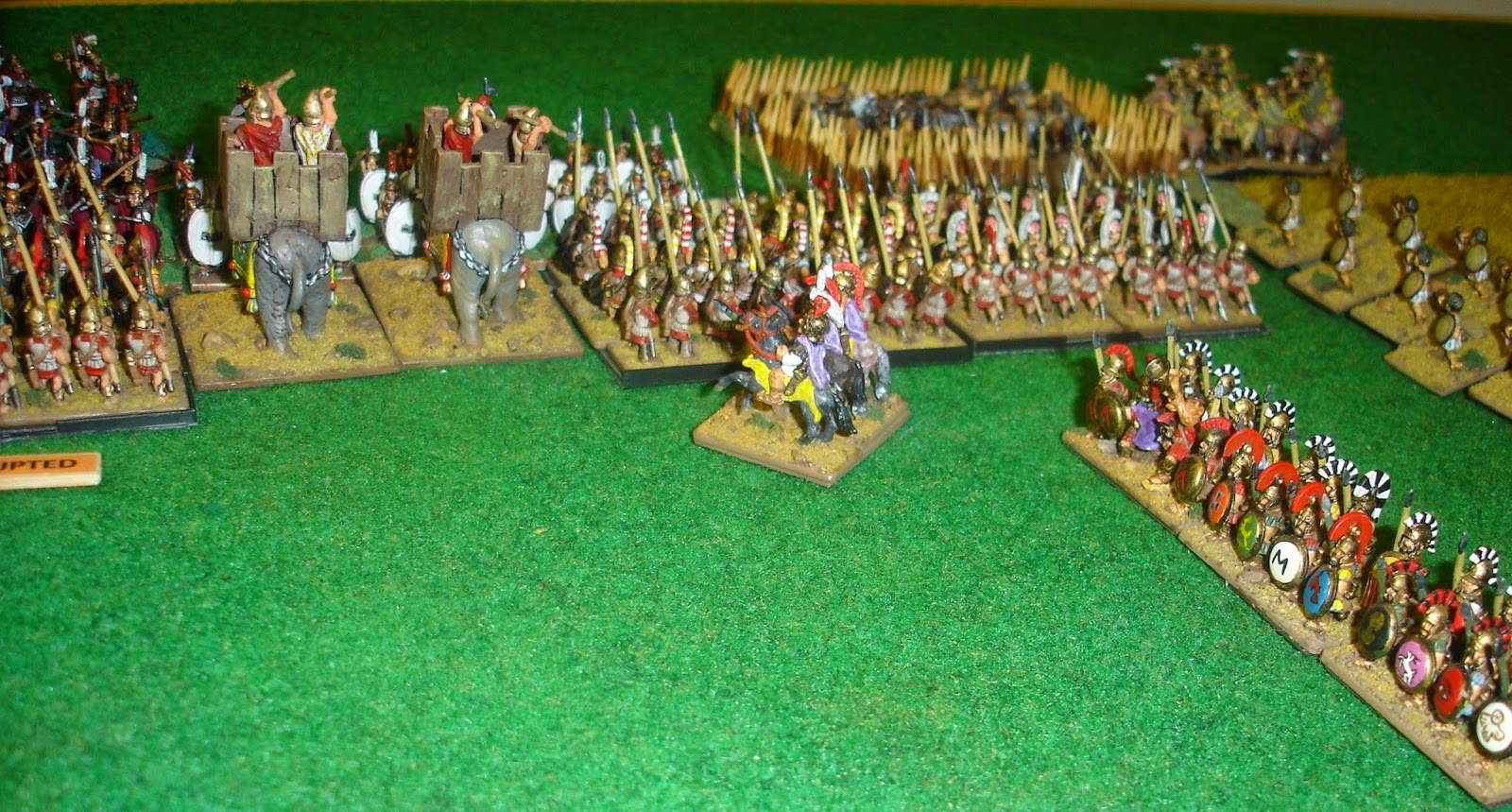 The Roman camp is invested.  Spare Pyrrhic troops are redeployed to the right.
The elephants and pikes are fully engaged. 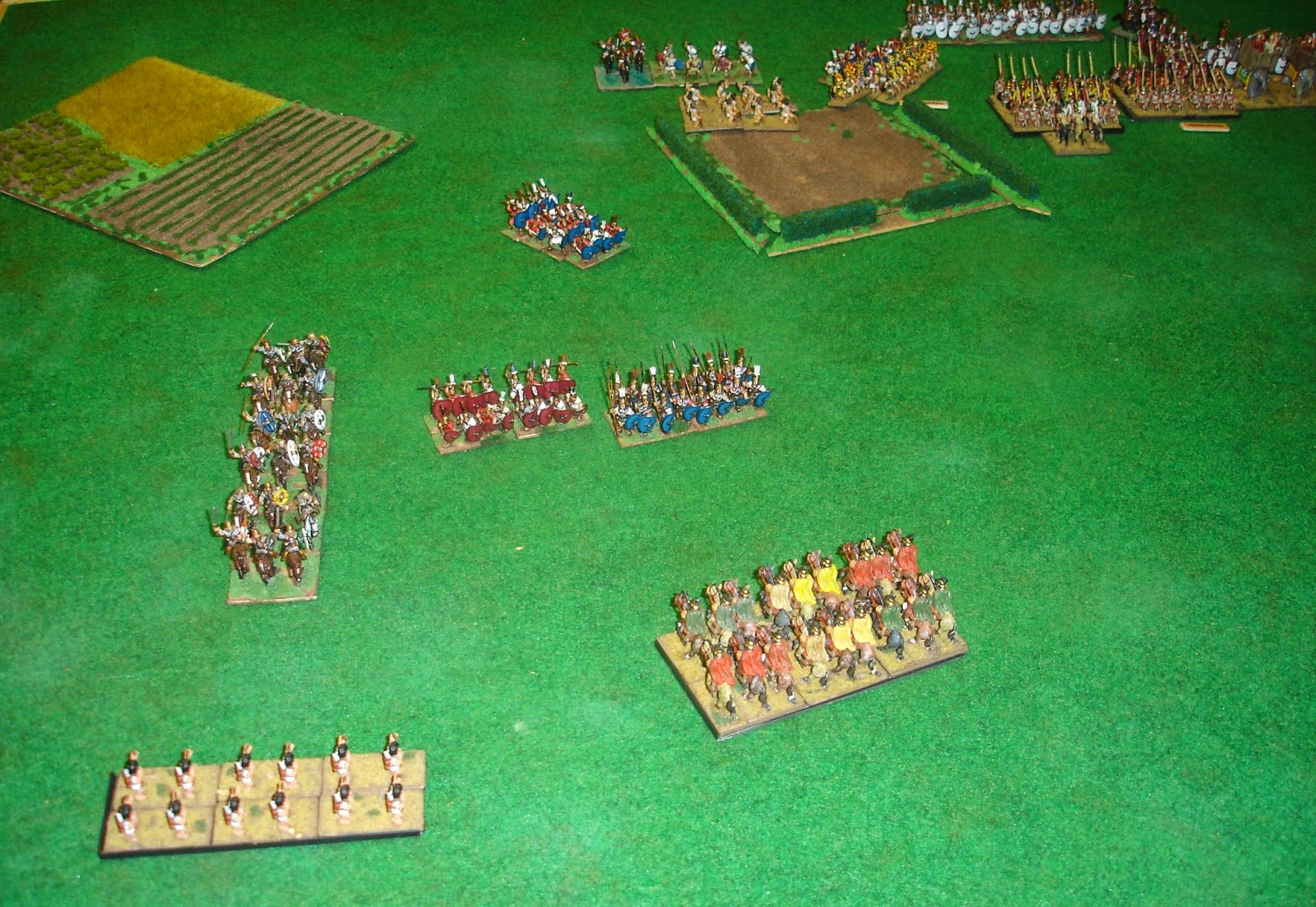 On the left the archers and the heavy cavalry hold the Roman's attention.  In the background the Romans can be seen to have engaged the Hoplites covering the pike's left. 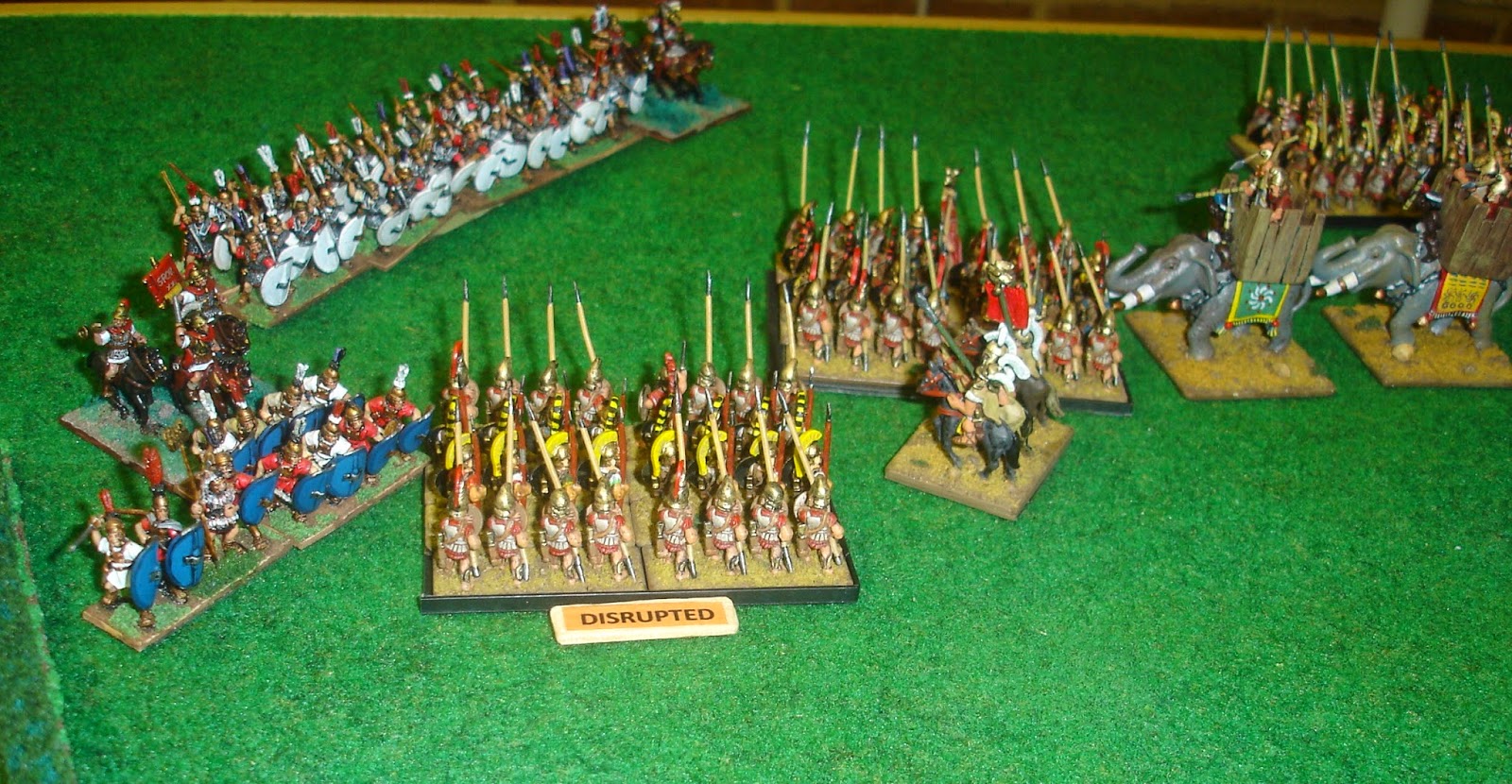 The Hoplites are destroyed!
The Romans crash into the now unsecured pike block's flank. 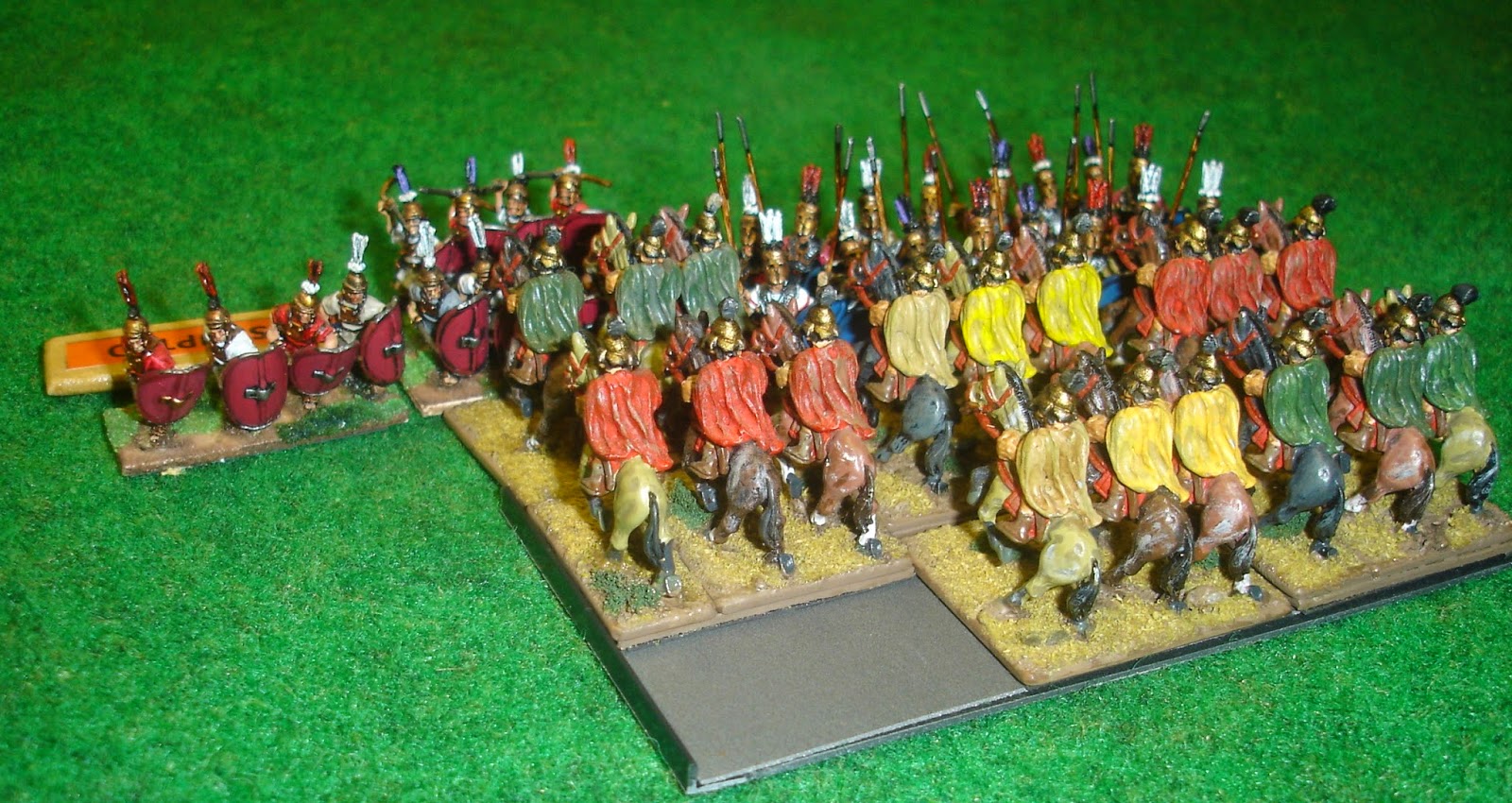 The Romans come to grips with the Pyrrhic heavy cavalry at about the same time as the Roman cavalry finally caught the Pyrrhic archers. 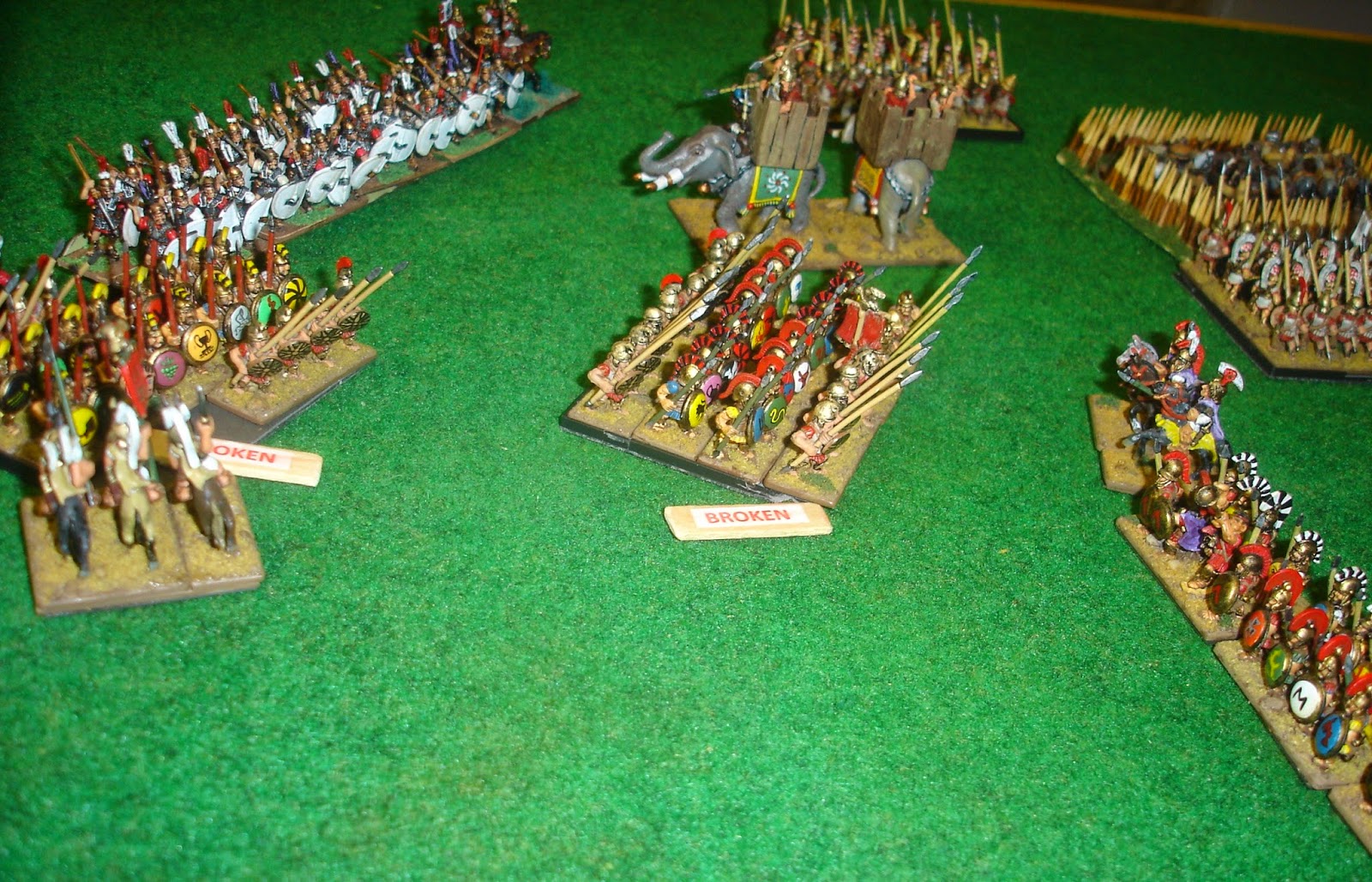 It just gets worse for the the two left hand units of pikes who both break and flee with next to no fighting, but they must have known that Pyrrhos, with the capture of the Roman camp had won the battle.

It was something like a 13 to 6 outcome, but regardless it was very entertaining, especially seeing the Roman units trying to out do themselves in who could throw the worst dice.  Took around four hours.  Nearly all my troop had their new movement trays, although they are still being completed with the addition of steel paper to hold every one in formation.