Another project finally completed.  I wanted a gully for Field of Glory.  I had the idea, but didn't really get started until I saw a post about using bark to make cliffs.  I thought I would combine that with my gully and so one side of each of the two gully halves started with a piece of bark from my garden (washed, dried and zapped in the microwave).  The body of the slope was built from polystyrene all mounted on some MDF board.  Lots of plaster and a good black undercoat.  Then a dark brown, grey for the cliffs, followed by lighter shades and finally some flock and shrubbery.  I made a felt base for the item, suitably coloured to give the correct FOG size and also to represent the terrain piece if it was necessary to accurately position any troops on it. I also embedded two cut down drinking straws to act as anchor points for trees to provide some added flexibility. 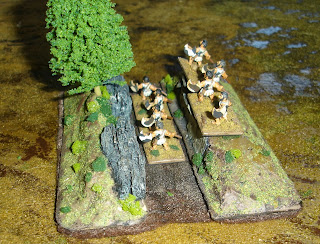 Some javelinmen hiding in ambush in the gully 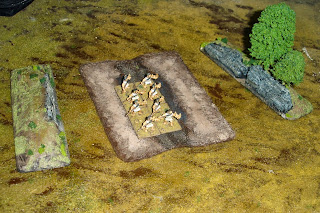 Just exactly where are they?  I tried for a 3D effect in painting the felt base. 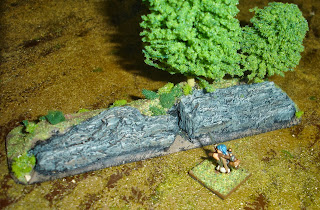 An explorer about to go on an adventurer. 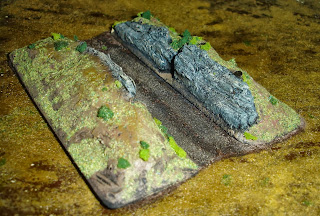 The complete item, sans trees.  The novelty cave shows up better in this photo.

Email ThisBlogThis!Share to TwitterShare to FacebookShare to Pinterest
Labels: Field of Glory, Terrain