No Teddy Bears Were Hurt In The Making Of This Post

While I have retired from paid work, my partner still holds down a full time job.  To her playful jibes about what do I do all day I was able to produce the following to show the actual work I had accomplished this week. 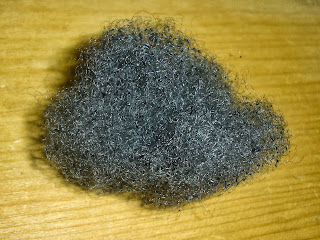 Yes, it feels like all week I was battling teddy bear stuffing to create a model explosion.  This saga had been going on for a while, ever since I first read this post: http://servicerationdistributionhobby.blogspot.com.au/2012/11/how-to-make-fake-pretend-and-for.html

While I started off eyeing my daughter’s stuffed toys and then those of my niece, I thought better of it, knowing I would never be able to live down the shame of having mutilated a teddy bear for my hobby.  It wasn't before long I was able to go to Spotlight, our local craft shop, and buy a whole bag, the size of an overstuffed pillow, of teddy bear stuffing.

Then the problems started.  It was like wrestling smoke; the miserable stuff had the consistency of a hairball or a fluff monster that collects under chairs and sofas.  Paint didn't work, PVA glue wouldn't take, the caulking material I had proved runny and messy to use (probably because it had been sitting around open for many years), in desperation I even used some of my mother-in-law’s hairspray.  That had some marginal effect, even though the act of using the spray literally blew my wannabe smoke teddy bear stuffing away.

After attacking the fluff with a skewer to pin it down I then went for the final act: the matt black spray!

Finally I had something to show for my week’s effort. It is also handy if I ever want to do a game based on the show Lost and need to represent the smoke monster. 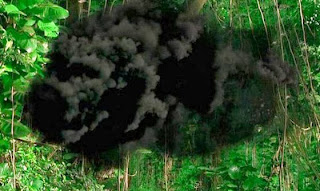 Now I can redouble my efforts with the washer bases to give my smoke and/or explosion some weight.  I can also get to work shaping the smoke (I hope).  The caulking stuff I have has at last now dried and that is the key to turning model smoke into model explosions.  So respect for teddy bears might yet still pay off.  This is important as it will save me from these (which I found at http://www.lostateminor.com/2013/02/05/undead-teddy-bears/): 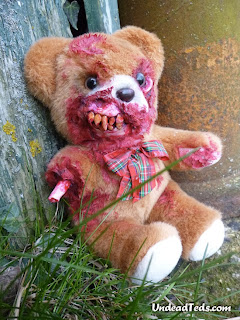