I was fortunate enough to get an invitation to participate in the Avon Napoleonic Fellowship's refight of Bautzen.  This would be a departure for me in that they use the Shako rules (while I have been strictly Napoleon's Battles since the early 1990s) and also a return to 1/72nd scale, or thereabouts, plastic figures.

The battle set up can be found here: http://avonnapoleonicfellowship.blogspot.com.au/2013/10/all-set-for-bautzen-bicentennial-bash.html

And the ANF's report on the first part of the battle here: http://avonnapoleonicfellowship.blogspot.com.au/2013/10/battle-of-bautzen-part-one.html

This post is just the view from my command as Blucher and features three units of my figures (as well as the figure used for Blucher). 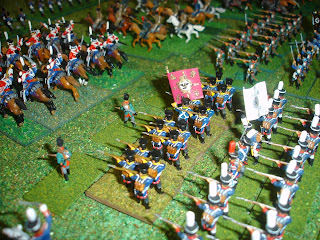 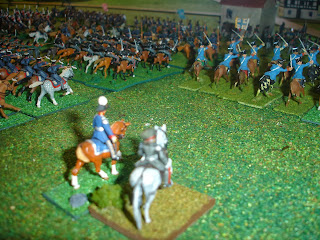 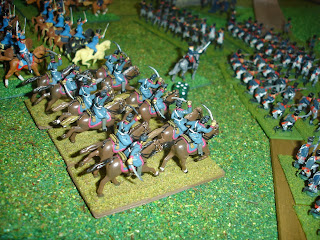 In the above pictures my troops were easy to see due to their distinctive basing.  This next picture is the "Where's Wally?" shot.  It actually shows all the Prussians with the exception of von Yorck (no relation) and the towns of Litten, Klien Bautzen and on the horizon Preititz (right) and Plieskowitz (left). 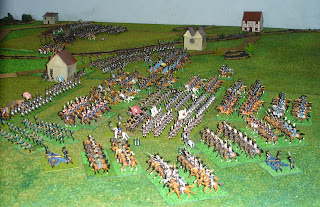 And now the action starts on the Allies' right with von Zeithen unleashing his cavalry.  This was the first battle for my uhlan figures and I was happy that they forced the French into a square.  The hussars were much more successful, although short lived.

The uhlans take two casualties and break-off.  The hussars destroyed their infantry opponents who had failed to form square and then charged the guns, destroying them, but ending up blown.  They were then ridden down by the French cavalry.  So it goes. 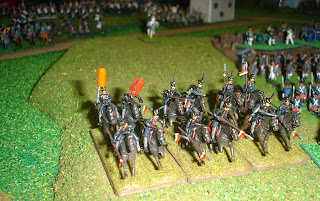 The battle is developing well with everything working smoothly.  Great job guys!