War For The Union via Vassal March 1863

March is the last winter month. Neither side receives any reinforcements.

Hurlbut continues his slow move towards the Mississippi.  Lyon digs in at Nashville, as reinforcements are ferried across to him.  Sherman moves to threaten the Confederate's Army of the Tennessee's line of supply.

Grant leaves it to McPherson and Buell to attack Memphis.  It is a straight 4:1 combat.  The die roll is a 3.  The Rebels retreat losing 5,000 men and suffering 2 fatigue.  Memphis falls with no loss to the Union.

Over east the Union start to fortify their line, but in a more interesting move, 10,000 militia are transported to Yorktown using river transport, establishing a depot there to support future operations.

The Confederates newly launched ironclads at New Orleans attempt to escape, but are heavily damaged in the process.

No!  J E Johnston and the Army of the Tennessee attacks Lyons at Nashville.  It is a straight 1:1 combat.  The die roll is a 9.  Both sides lose 15,000 men.  The Confederates take 1 fatigue the Union 2 as they vacate Nashville, however its functioning as a Key Industrial Centre has been permanently destroyed by those damn Yankees (along with Memphis).  Lyon retreats to Carthage.

In the east Taylor moves to Richmond, ready to strike at the Yankee landing at Yorktown. 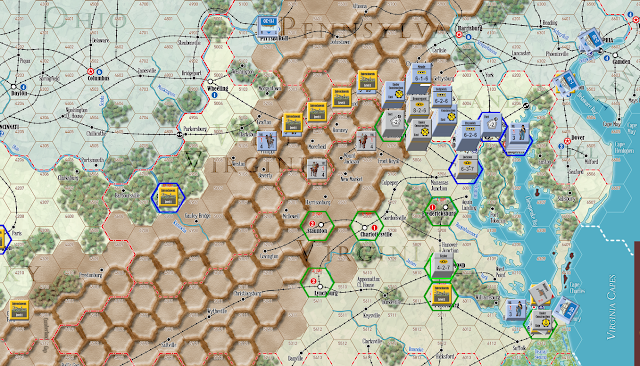 How long are those Yankees going to last at Yorktown? 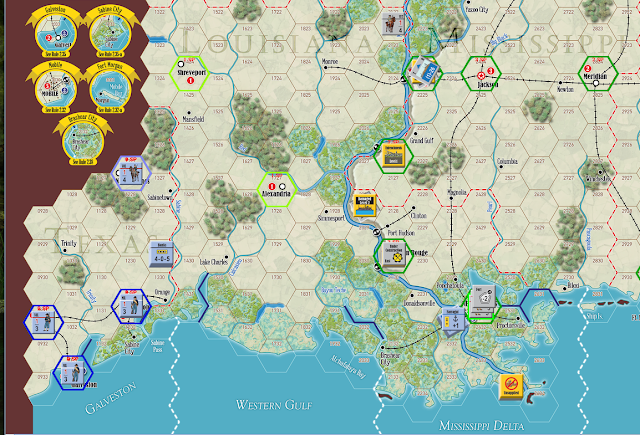 Are the Union going to send troops to the Mississippi? 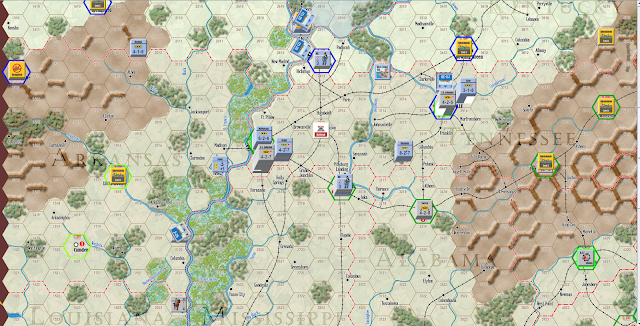 Can the Confederacy hold Nashville?

Troops are promoted.  Finally the Union will have parity of troop quality with the Confederacy.  In terms of numbers they have about a 50% superiority.
Confederate supply capacity is down to 106, however this still allows them to recruit an additional 25,000 volunteers.  With just three KIC they receive only 3 Resource Points.
The Union receive Slocum who is immediately put on the reserve list.
Posted by Sun of York at 1:29 PM