In the continuing quest with the ANF for the perfect Napoleonic wargaming rule set, yesterday we (Stephen N, Mark B and myself) ventured out to tackle Heart of Oak with the ANF crew.  Julian had put together the Glorious First of June as the test scenario for these rules.  While we had copies of the rules from Wargames Vault, I think it fair to say I was probably the only person who had been able to make a pass at reading them.  So while experienced miniature wargamers, with some knowledge and experience of naval wargaming, we were completely new and unknown to Heart of Oak.

All ship models are from Sails of Glory.  The game scale was 1 mm equals 1 metre, not very nautical but spot on for the model scale.  The wind was fixed at strength 3 and was from the SSW.  North is the left hand side of the table in the following picture. 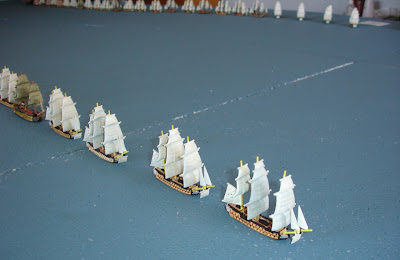 The British Van turns towards the French line.  The French were moving at 8, 12 or 16mm per turn.  A turn was a minute.  We completed eleven turns in seven or eight hours. 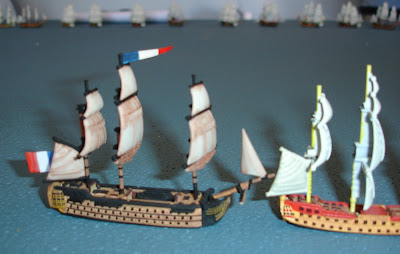 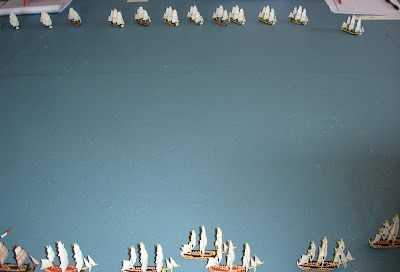 The British are now all turning towards the French.  The French line is getting messy as the ships travel at different speeds due to their quality (fair enough) and while only a few mm it soon adds up meaning keeping in formation becomes problematic.  My thought is that Hookers could be restricted to their speed, but Average ships could choose from the Hooker to the Average speed distance and for Smart ships they could select from the range Hooker to Smart.  Otherwise you'd have to fiddle with sail settings all the time.  However, maybe that was the idea. As we were giving battle we all had fighting sail set.

Some of the British ships.  After a few test shots at extreme range we waited until medium range (under 700mm) to start blasting.  Damage was impressive to start with, but soon tapered off, but not before lots of cries of alarm that the concentrated French fire was going to sink a British ship, something that never ever happened they cried. 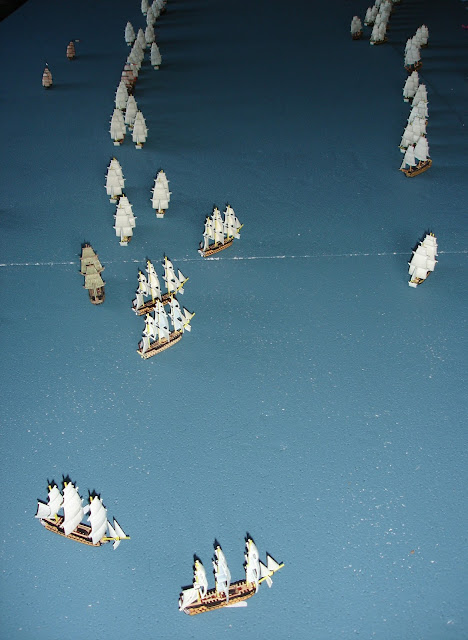 The French Van did some tacking.  As a result one ship was demasted. 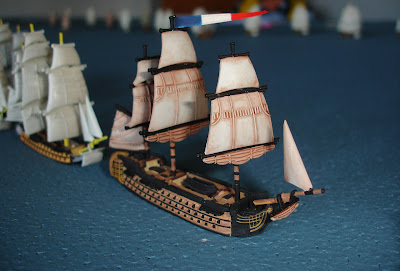 Heat and exhaustion set in and we called a halt.

I thought the rules were playing well.  The scale of the scenario was a challenge, but seemed to be working okay.

I did see an issue with the chance for critical, especially with a poor crew as it meant it was worth their while to blaze away even if there was little chance of creating damage, there was always a chance of a critical.  I would reserve criticals only for full broadsides or just reduce the chance to one percent for continuous fire.

Sailing when you specify the ship's heading (thanks to Kaptain Kobold for that tip) works a dream.