To Retimo with Blitzkrieg Commander

This has been on the planning board for at least three years and a dream for thirty years.  On Thursday Richard and I got to give it a go.

There are lots of excellent books on Crete during WW2, but a simple source I used was from the Australian War Memorial: Digger history - Retimo.  I don't know if the hosting site is associated with the AWM.

When I created the OOB I was happy that they seemed to be fit within the BKC force limits.

Commonwealth Forces at Retimo May 1941

I made up the variation on the HQ command as a minor scenario change for the game from the standard BKC rules.  As it turned out it never really affected the game, but that might be because of the way I deployed the Commonwealth/Greek forces.  I would have liked the Greek Police battalion, but that would have been too many points and so I left them off table guarding Retimo (which they did historically).  They might have made a nice counter attack force, but I'm getting ahead of myself.
I had considered making the Australians veteran, but the shortage of ammo on Crete would have made an AP rating of 4/30 somewhat unhistoric.
The Matilda was subject to a one in six chance of breakdown.  Ha ha (read about this later).
There was no Command Post as there was a shortage of radios.
There was also a shortage of shovels, so not all the troops were entrenched, but still... (more about this later).

Axis Forces at Retimo May 1941

Flexible Tactical Doctrine
Initiative Distance is 25cm
HQs may issue orders to units in other formations without penalty.

What can you say?  The Axis at their best.

The BKC Scenario 11 Airborne Assault was used as the basis for the game and that specified a 50% increase in points for the attacker.  It was going to be interesting seeing an elite force descend on a mixed force of worn and green troops.  Most satisfying though was the points allowed for all the forces (more or less) that were engaged.

The big variation from the generic BKC scenario was deployment.  Instead of being limited to the central third covering a single victory objective, the Commonwealth had to cover the whole table and seven potential victory objectives.


The Axis randomly and secretly receives three of the seven built-up areas as victory locations.

The Commonwealth deploys across the whole battlefield.  This is Fixed Defense, but with resources only for Hasty Defense, i.e. no minefields or bunkers.

For our game this was perhaps a bit too simplistic and we initially had some confusion about the initial Axis move.  As the basic scenario effectively gives the Axis player perfect placement without any interdiction, this was not like the actual battle at all.  We got round this to some extent using an initial Allied round of opportunity fire.  The entrenchments also turned out to be a lot tougher in that they provided all round defense, even if the troops could not always engage the enemy with fire.

Luckily this did not spoil the game and also made for the action to commence straight away with roughly six turns of mayhem.  After that the game settled down somewhat for the final six turns. 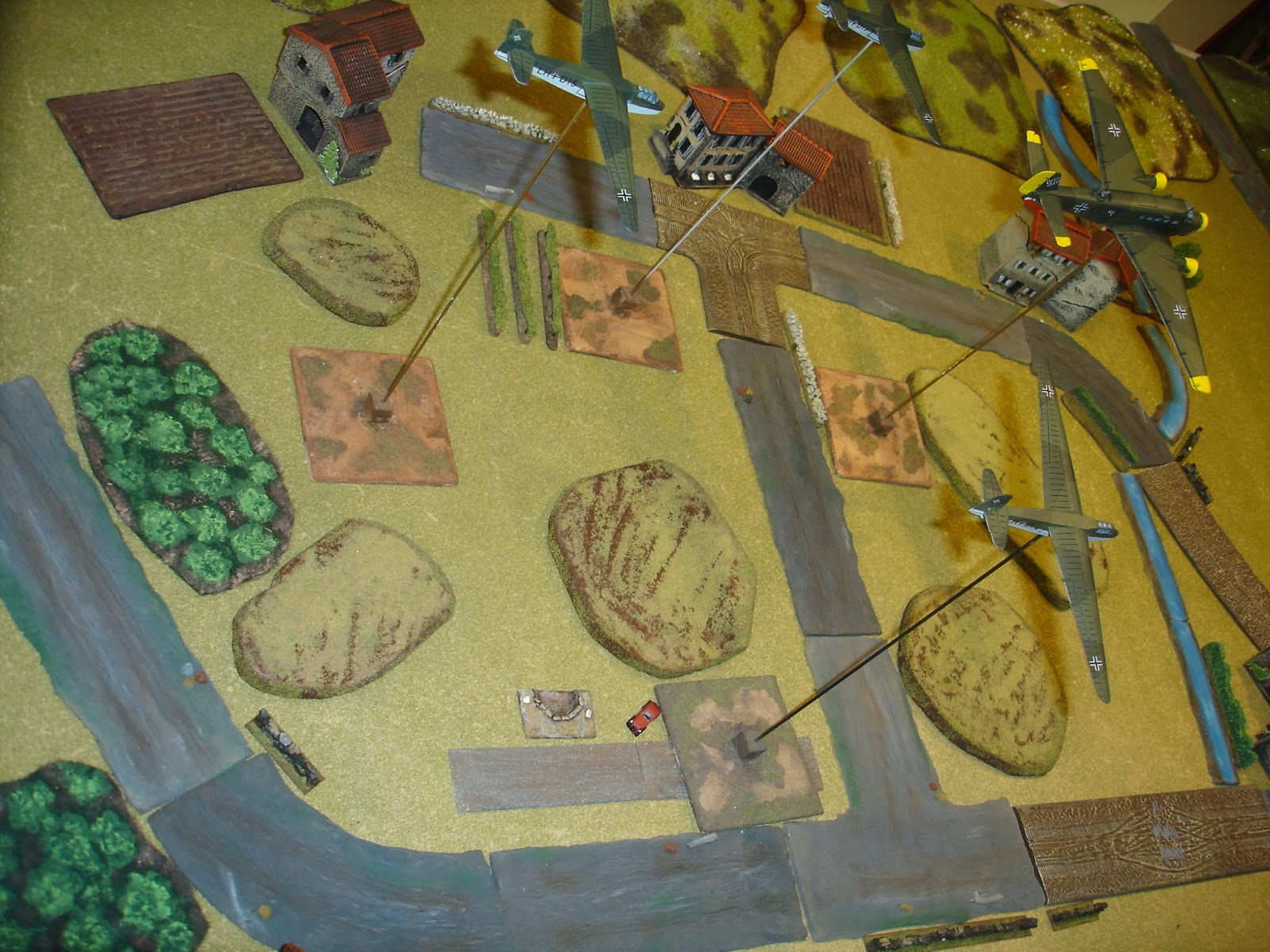 Calm before the storm.

After having scaled the map to the standard BKC table size (6ft by 4ft) I was not prepared for the density of the key terrain pieces.  The road is way to dominant and didn't feature in the game.  The sea/coast is just to the bottom of this picture and we did not represent it.  The felt with green splotches represents the olive groves at the eastern end of the table with the village of Stavromenos not shown in the photo but it is just at the extreme lower left hand corner.  At the top left hand corner is the village of Loutra (Lantra), then Pigi Loutra (Piyi) in the top middle and finally Adhele  in the top right hand corner.  Just out of view is the village of Platanes in the lower right hand corner.  There is one other village, ,to the right (western edge) of the photo.  The villages and the airstrip (next to the abandoned red sports car) were all potential victory objectives.  The Axis player had been secretly (but randomly) issued three by the "powers that be."  The models used for the villages were superb and are from The Miniature Building Authority.  In retrospect we didn't use them to their full potential.

This was the map we were "using".  It was sourced from: http://www.creasey.ca/crete/allemand/retimo.html
It has already been distorted to fit into a 6ft by 4ft area.  We then left out the sea and did our best to fit all the main points in.  This is the list of villages and potential victory objectives: 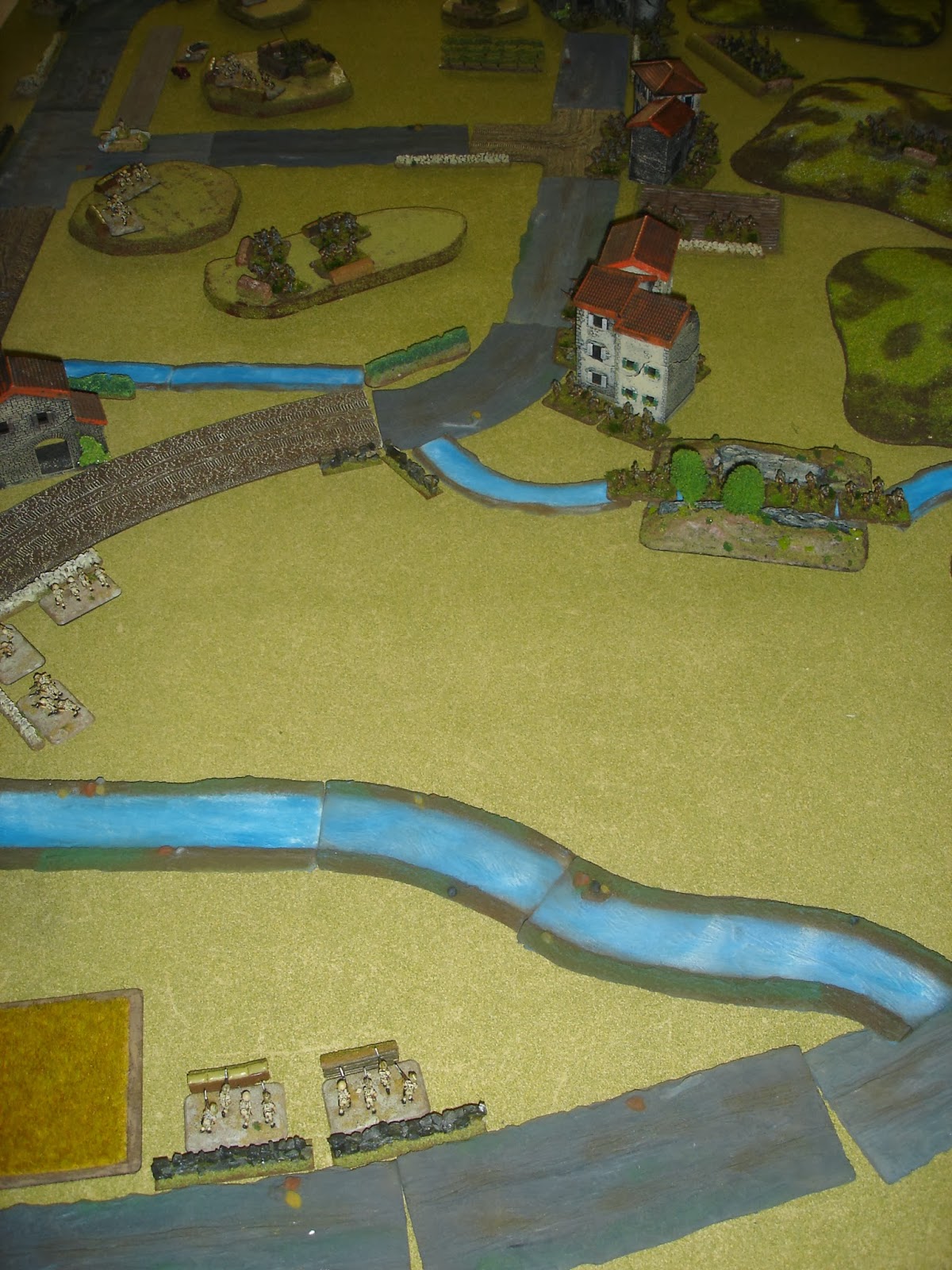 View of the battlefiled from the western (Retimo) edge.  The rivers represent dry wadis but we didn't really give them any special properties and they didn't figure in the game.  What is now visible are the Allied defenders.  They are either dug in (note the company - 4 stands - of Greek militia dug in on the longish central hill) or sheltering in the villages or behind walls.  Also note the Matilda "parked" on the road at the western end of the airstrip. 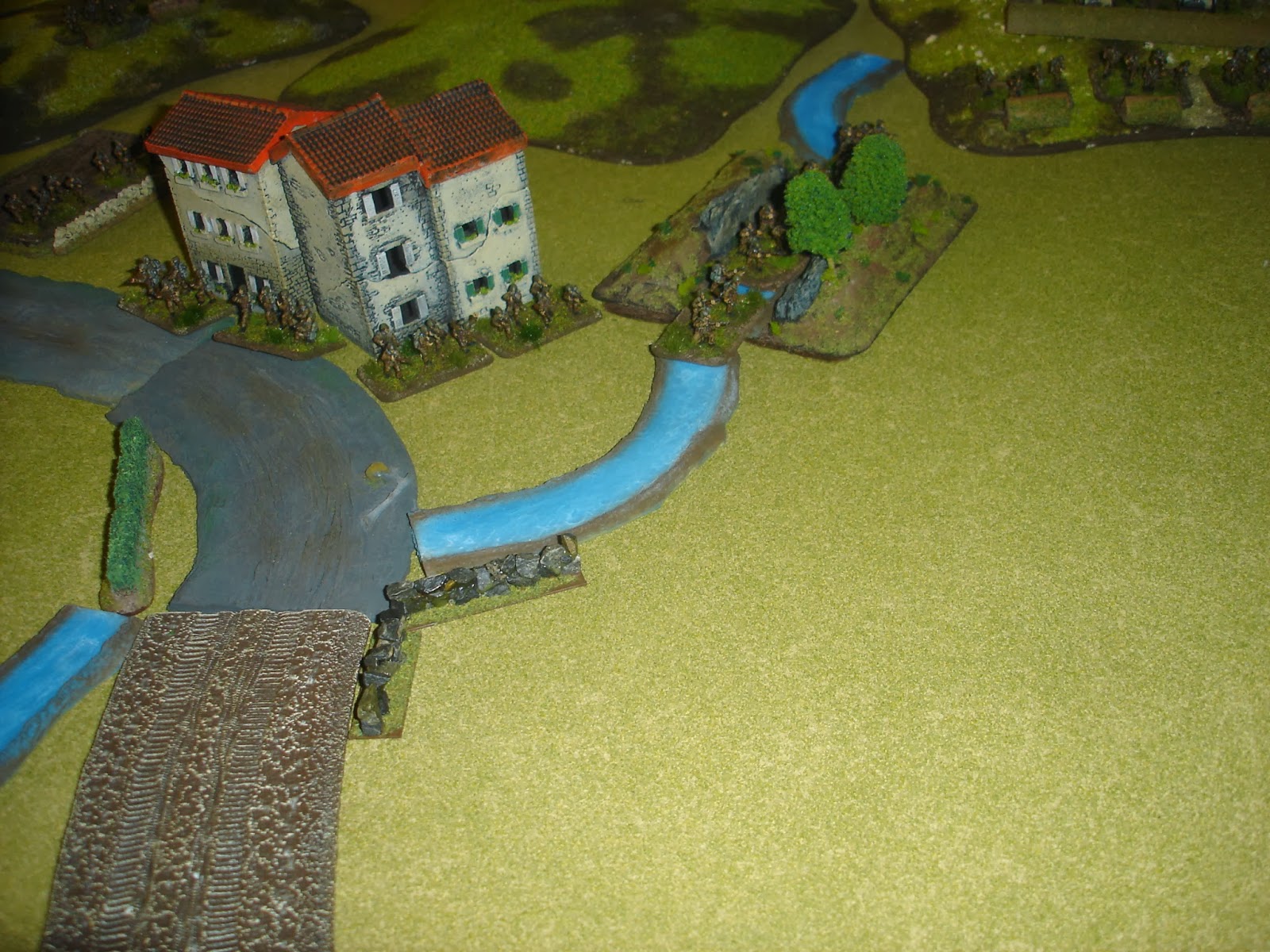 Another company of Greek militia, this time defending Adhele.  This company is also one to watch.  A third company is in the ravine and the final company of the battalion entrenched on the foothills protecting a battery which was firmly fixed ready to engage enemy warships.  The Commonwealth had four guns, but no FAO - not on the list of available troops.  They are only there as they were historically there, but didn't take part in the battle as far as I can tell.  I know there were issues with ammunition, communications equipment and that the crews were not armed. 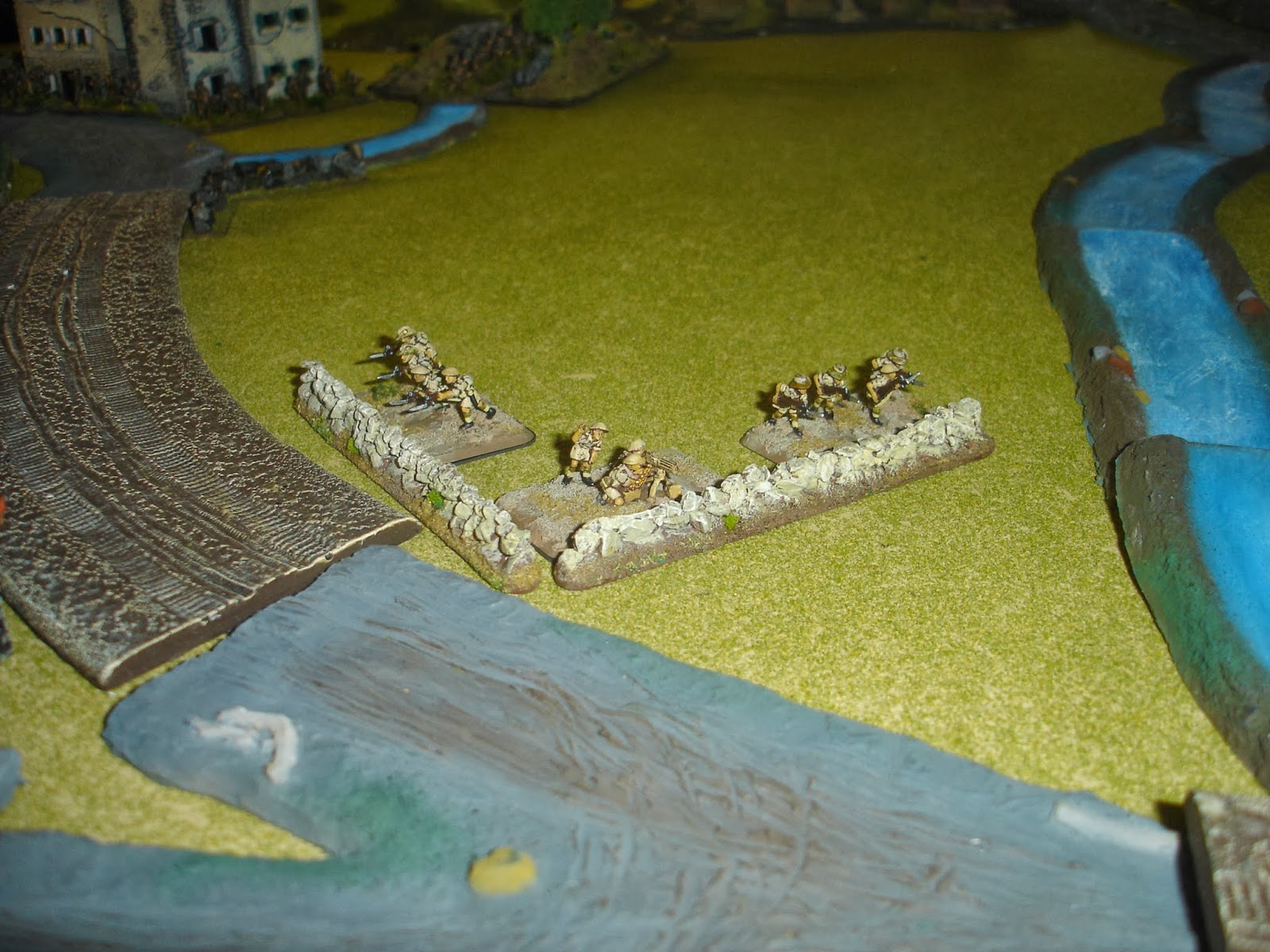 These Australians feel pretty safe behind this stone wall which counts as hard cover.  They are facing the sea were the invasion was expected. 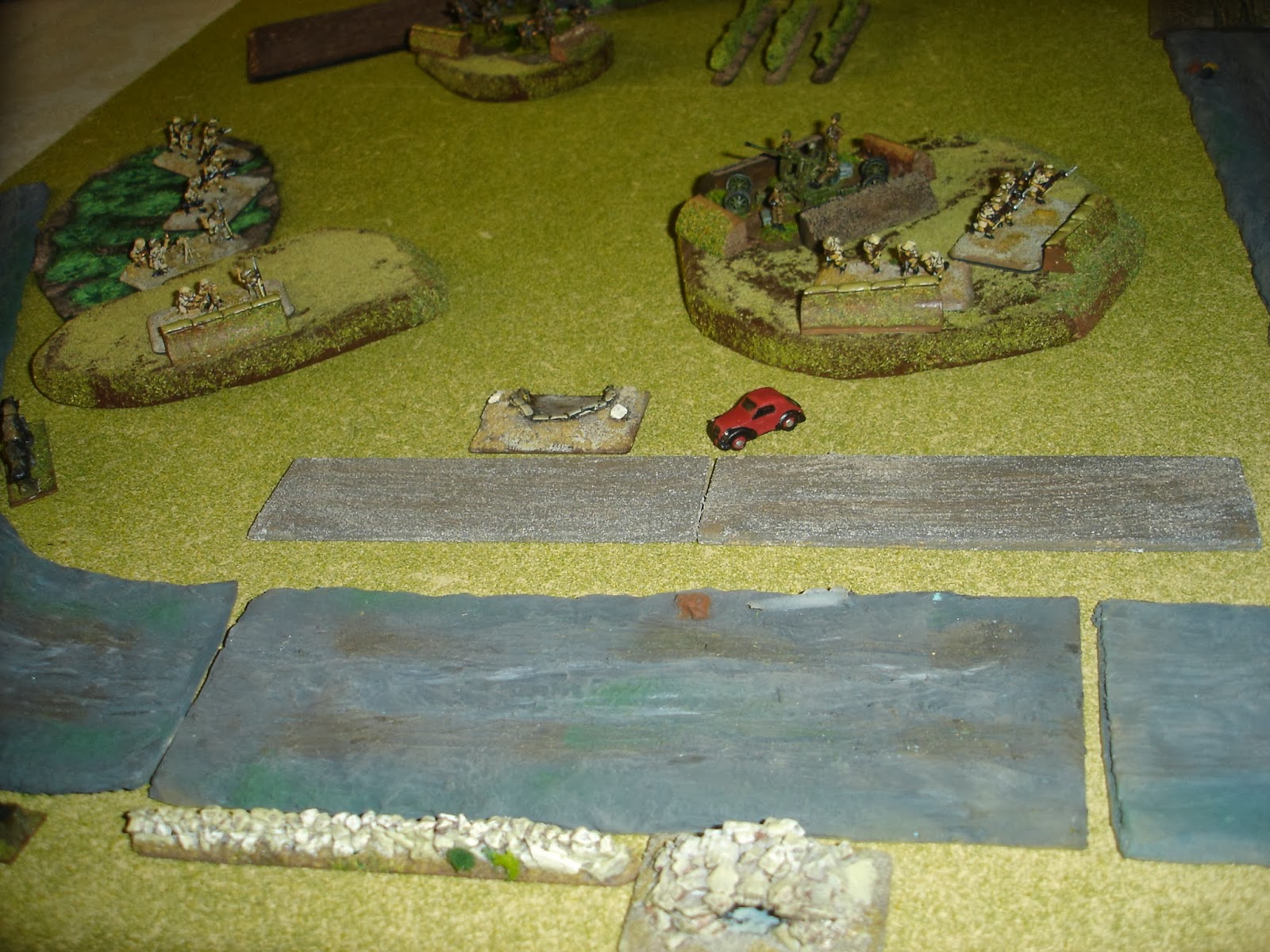 More defenders, this time around the airstrip. 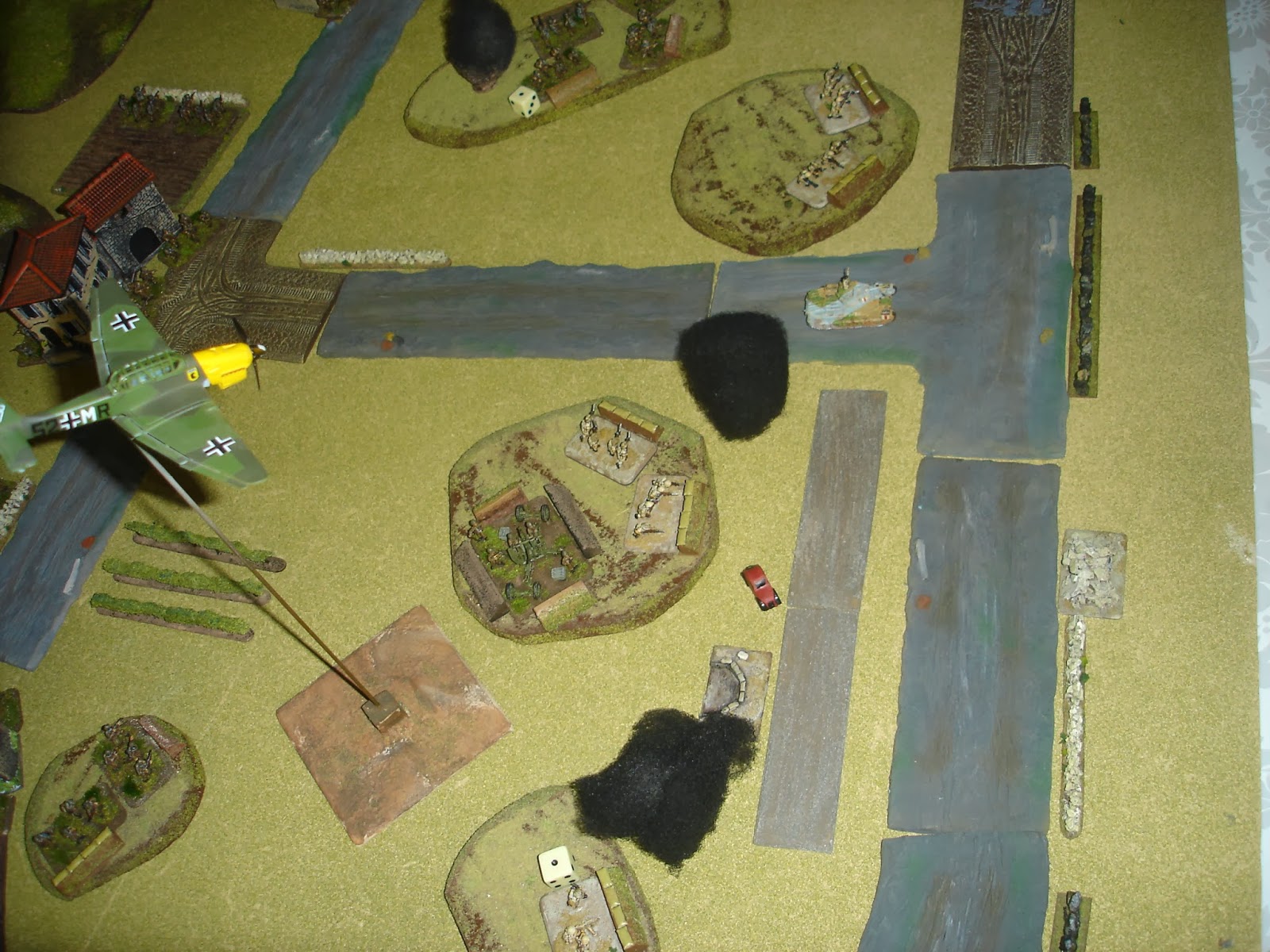 Battle commences with the scheduled airstrikes. The bofors aborted one strike. The five strikes were not very effective. 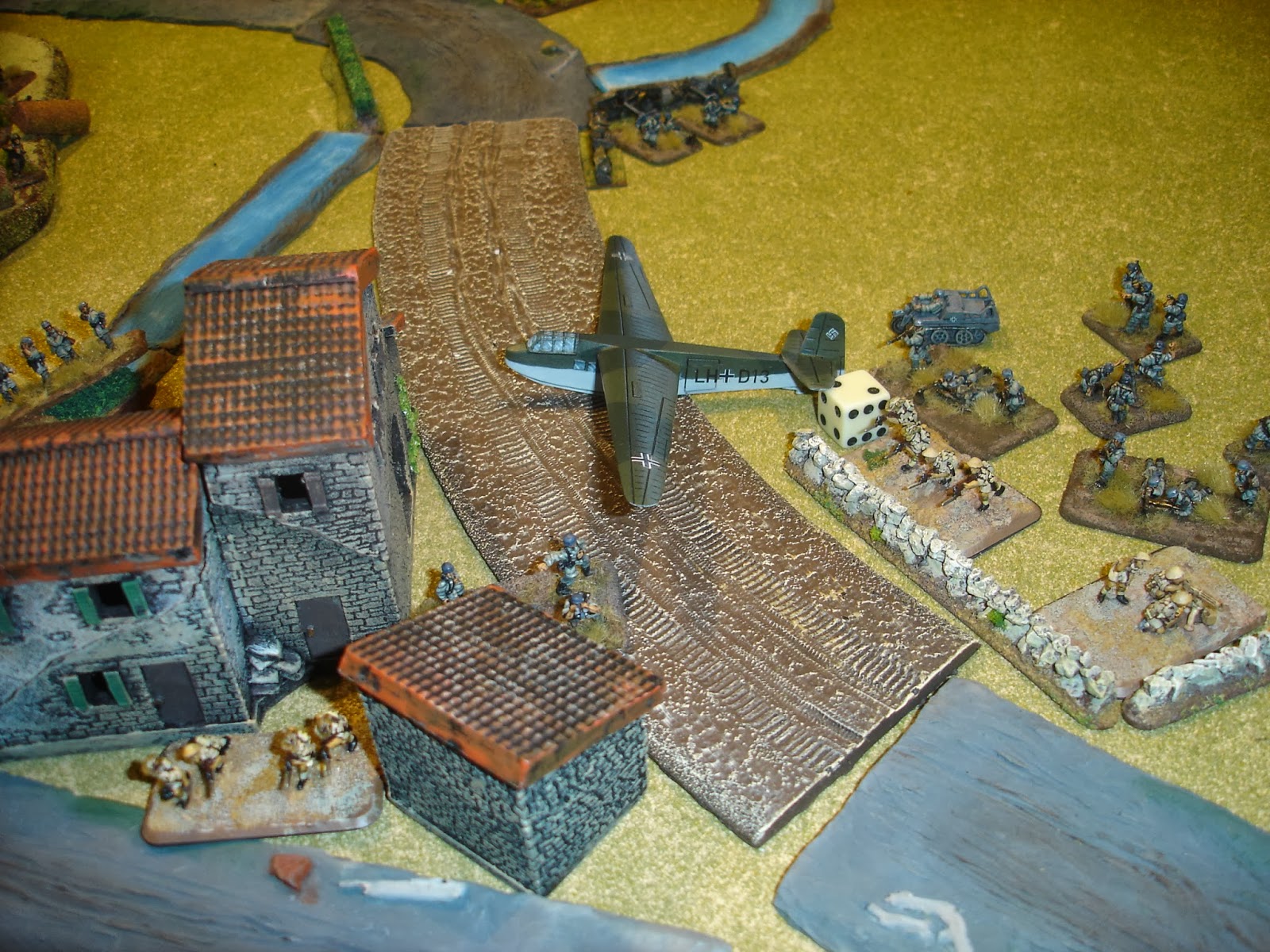 The village of Platanes comes under attack.  The deployment rules allow for near perfect placement, but after some discussion we settled that the "drop" represented the first move of the Axis command phase and that opportunity fire could be applied by the Commonwealth - great if you are facing the right way (only 180 degree arc to the front).  The glider is just for show, there is no distinction between glider or parachute landing.  The Australians behind the wall and in the village were slaughtered. 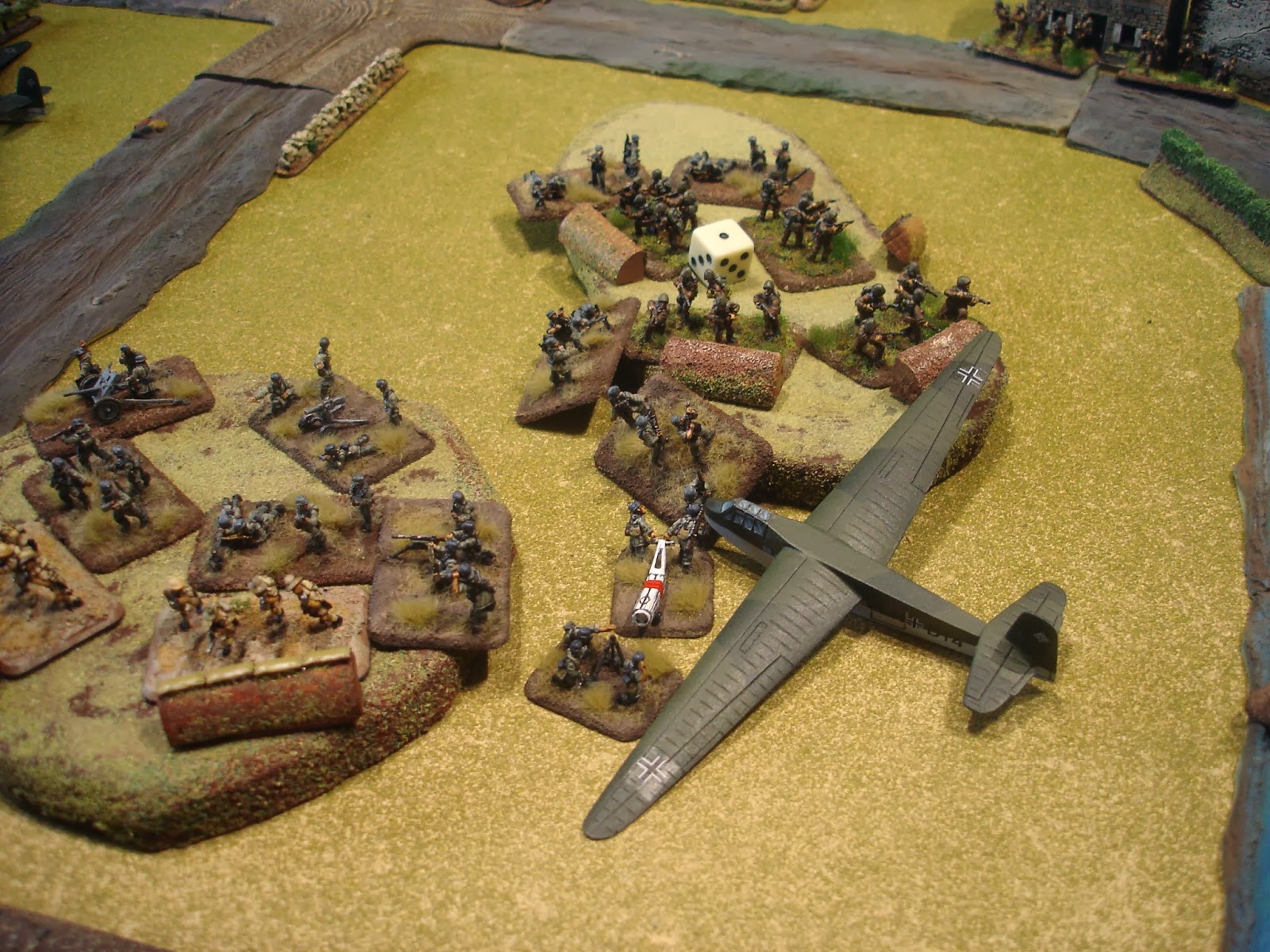 The second drop point was on the central hills.  The Germans eventually took one of the hills from the Australians, but the hill held by the Greek militia was a hill too far.  Here the Greeks were supported by their compatriots in the village of  Adhele. 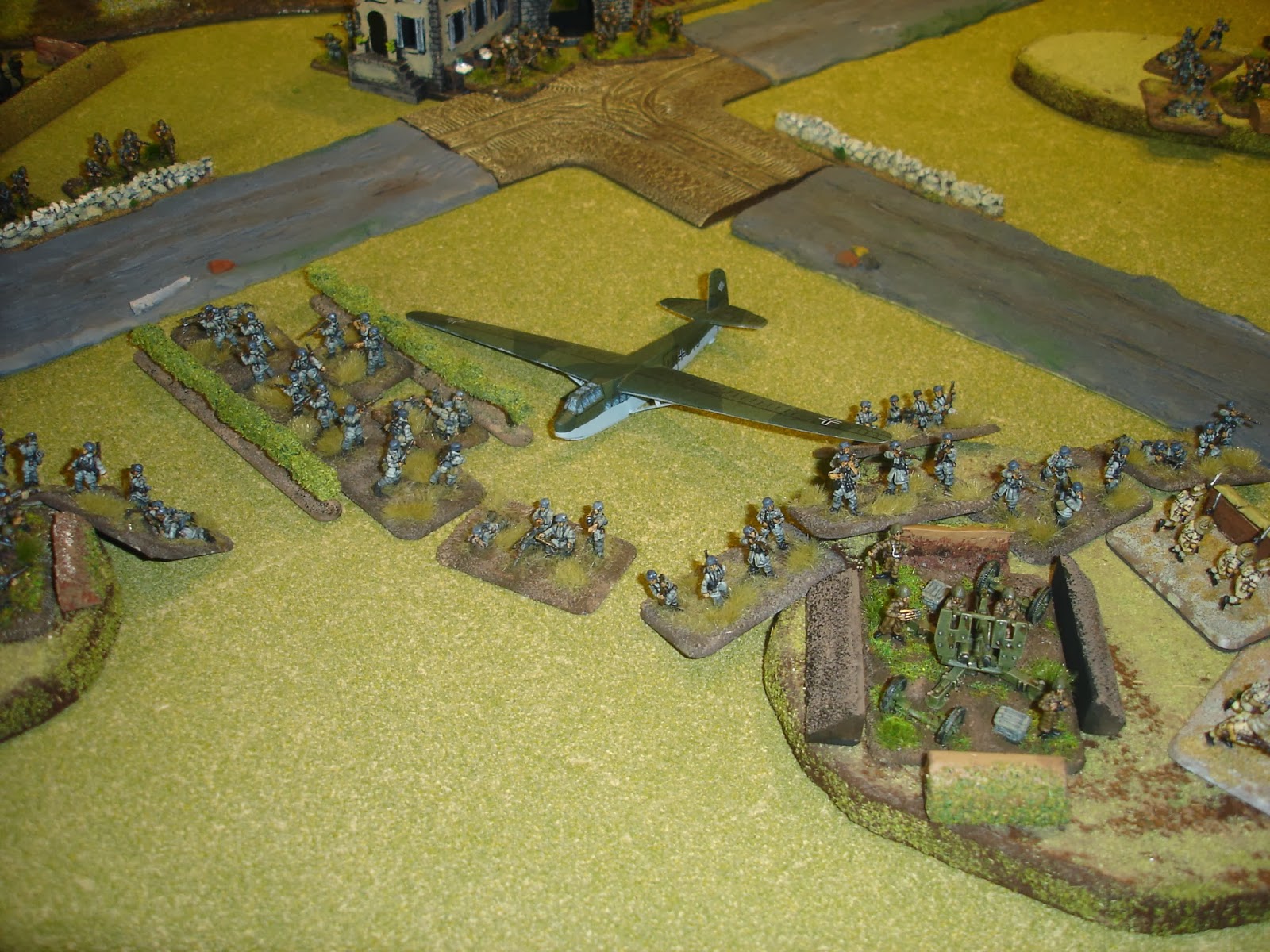 The third drop was on the hill covering the airfield.  Again the Australians came off the worst, although they did hang on to the hill (just).  The other Germans went to ground in the vineyard and had a long but fairly ineffective firefight with the Greeks defending the villages of  Loutra (Lantra) and  Pigi Loutra (Piyi). 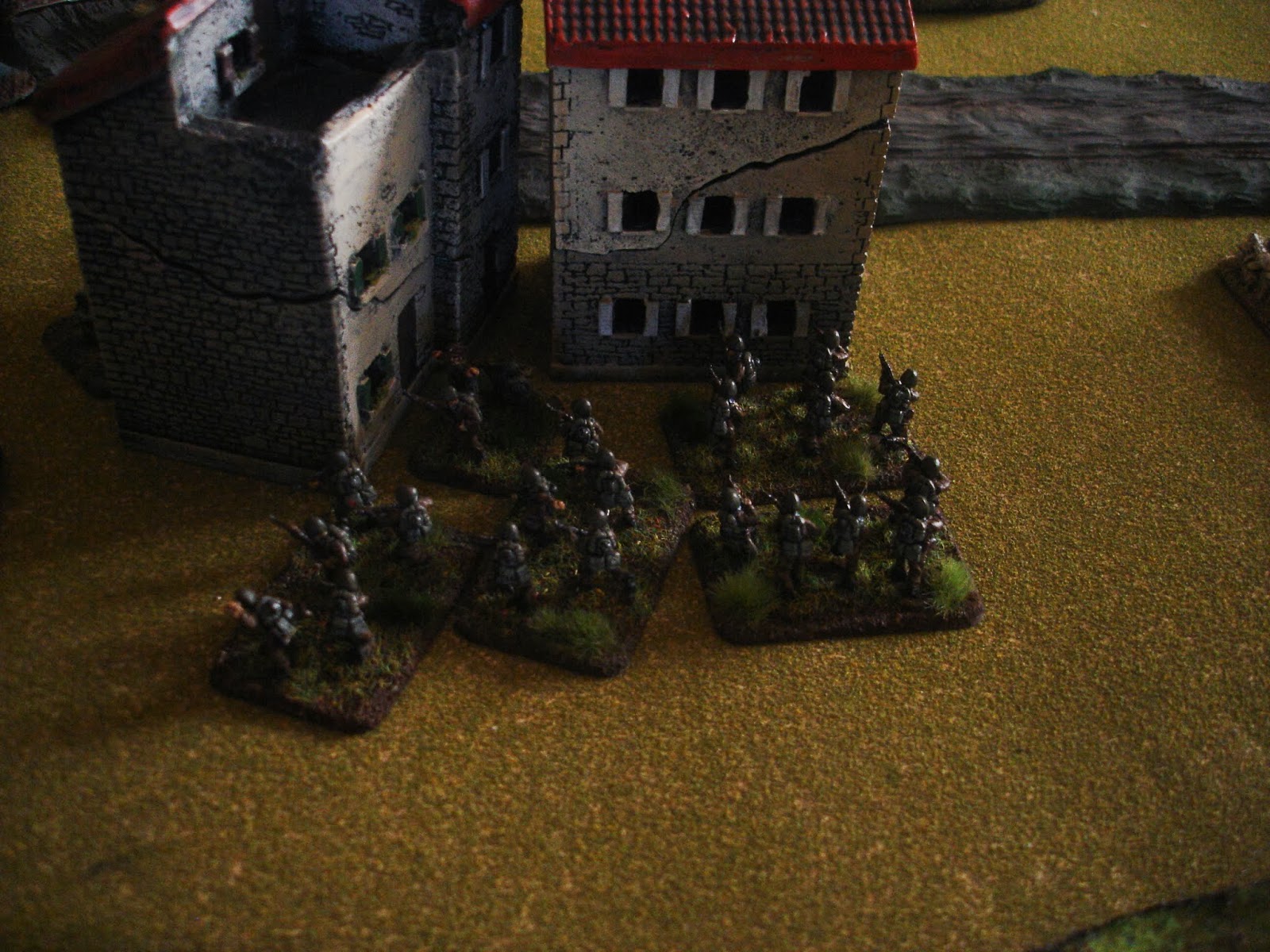 So... after aiding their friends to defeat the paratroops on the central hill, theses Greek defenders of Adhele decided it was party time and pulled back out of the village to crack open the retsina and light up the barbie (there's a rationalization of a command blunder for you!) 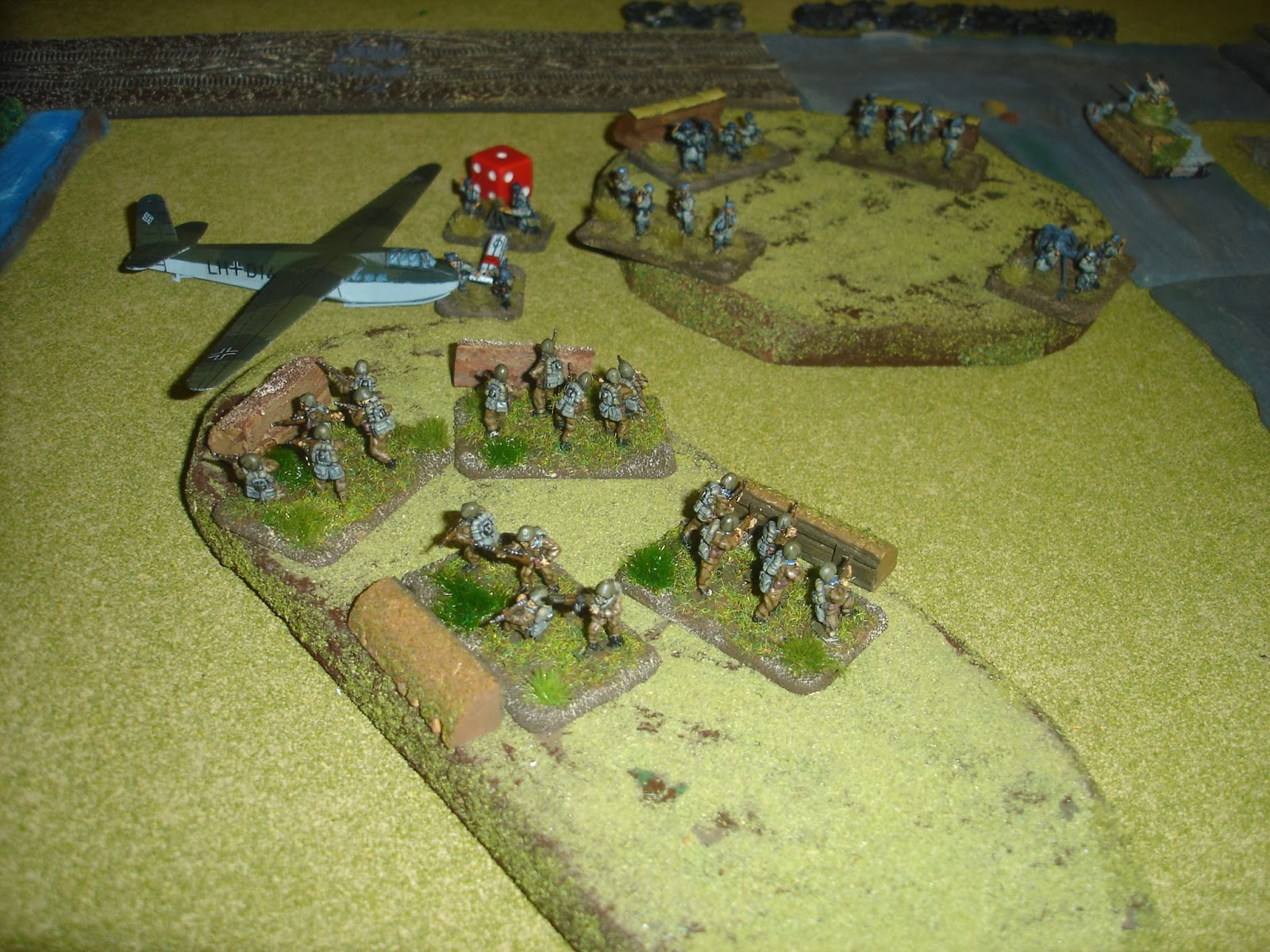 The brave Greeks keep hold of the central hill, picking off any exposed Germans on the coastal hill who in turn were trying to knock out the Matilda with a 37mm pea shooter (top right hand corner of the picture). 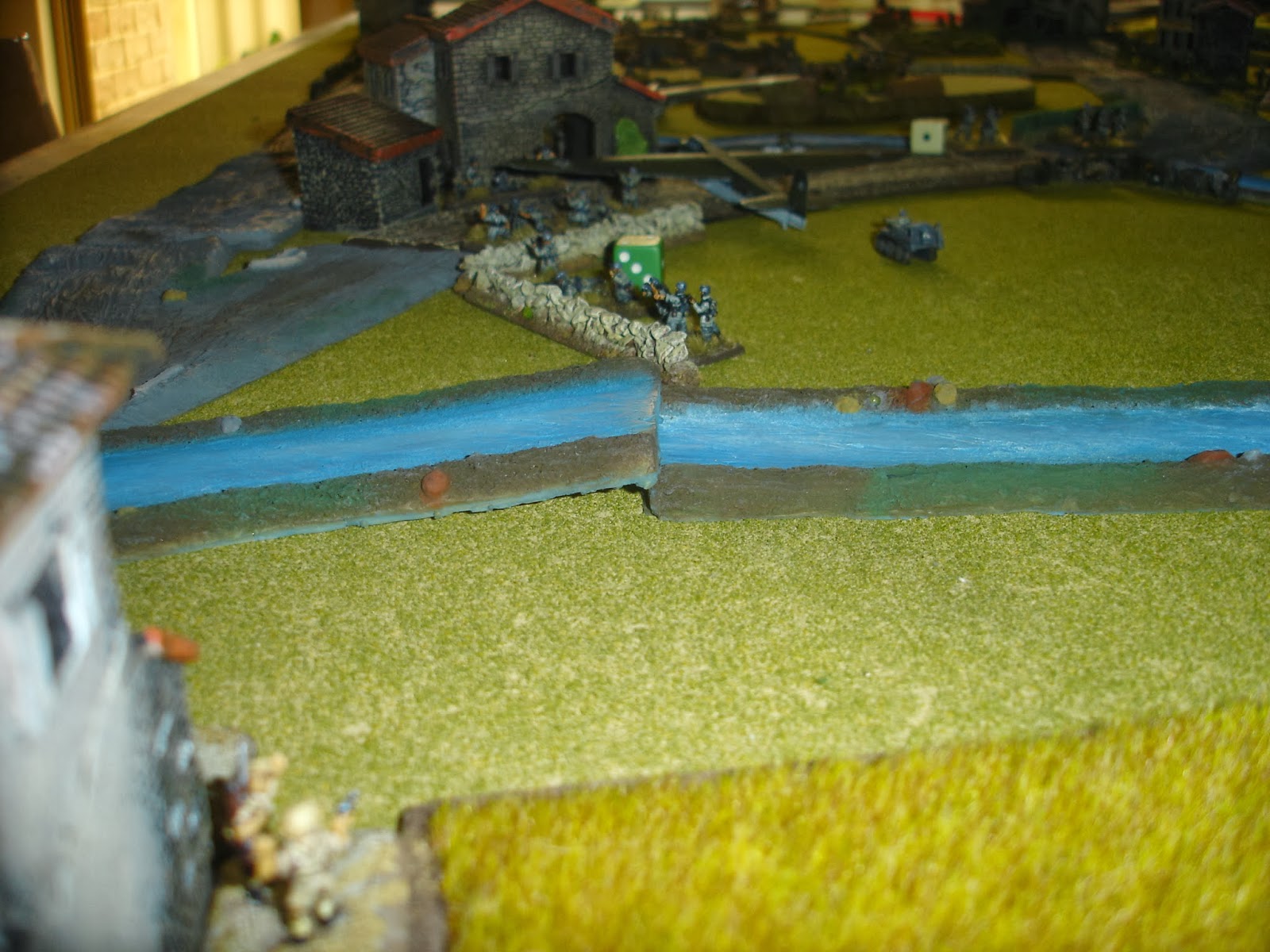 The Germans consolidate around Platanes.  Any exposed Germans get shot at, but eventually this part of the battlefield settles down.  There are not enough Australians to launch a counter attack against across the open terrain - this is where the Greek police battalion might have been handy.  As it was they were unable to stop the Germans from sending reinforcements towards the airfield or protect Adhele. 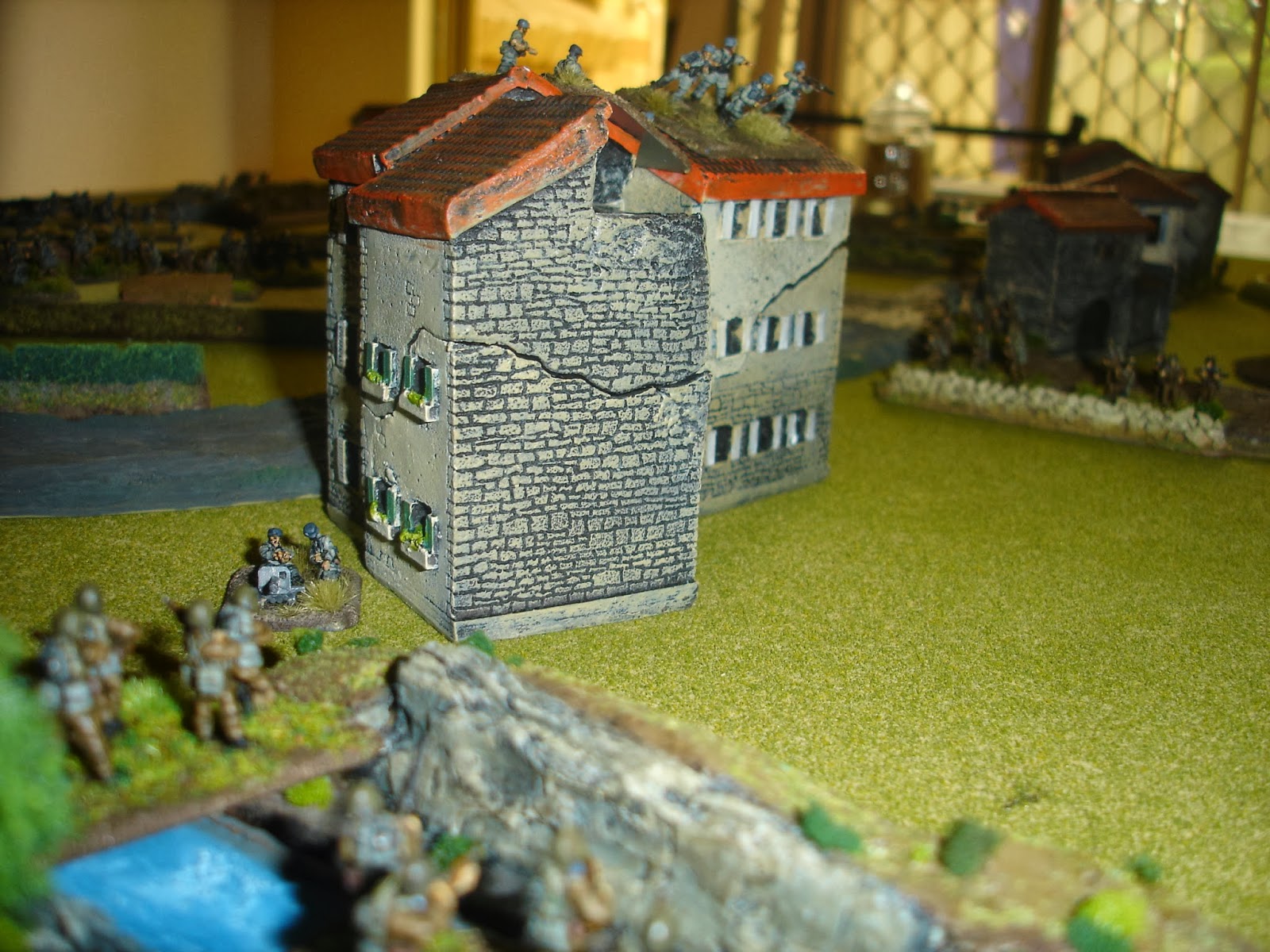 The aftermath of the party.
So, after their command blunder that saw them evacuate the village, they failed subsequent command rolls giving the Germans the opportunity to occupy the village.  Doh!  The next turn of course they passed their command roll.  I figured that the Greeks would be so incensed that they would attack.  They did and were wiped out (green troops in the open versus elite engineers in a stone building, stupid, but courageous). 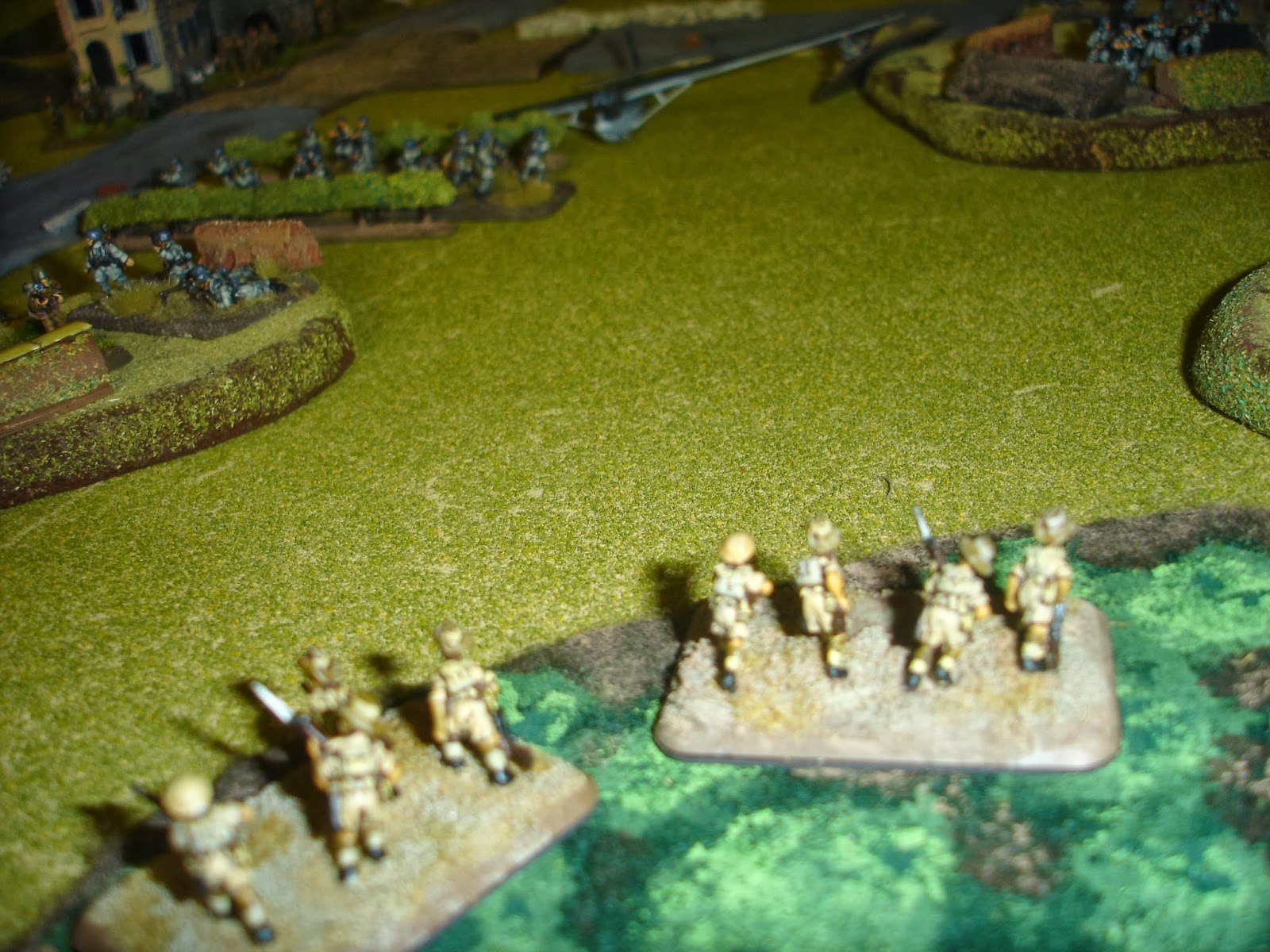 Over on the far eastern side of the battlefield, the Australians in the olive grove come under sustained fire and eventually pull back. 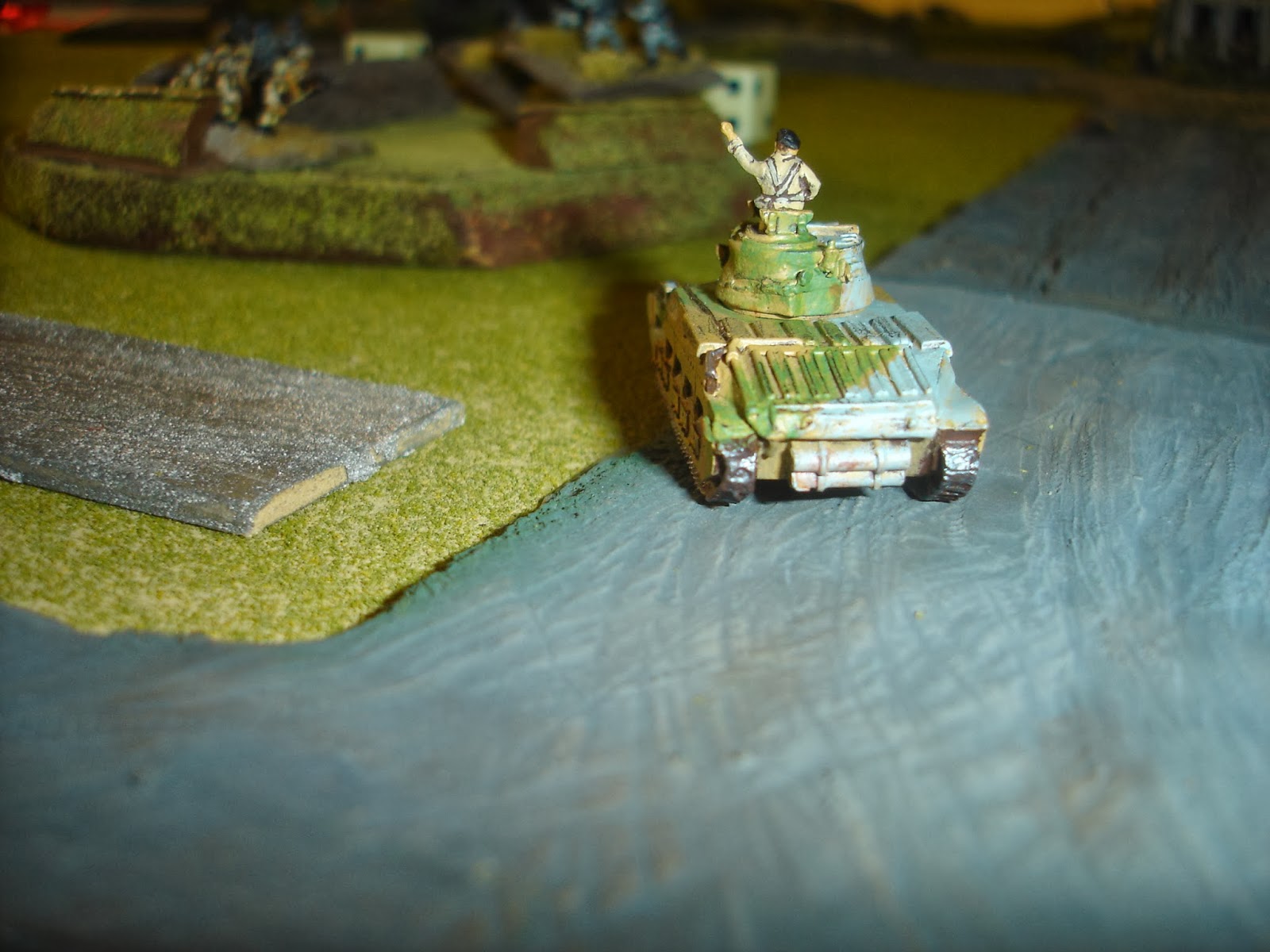 The Matilda!  It hardly moved the whole game (probably a good thing).  Often it was suppressed and at other times failed command rolls.  It was able to use its initiative and opportunity fire on a few occasions.  However it did give the Germans cause to pause. 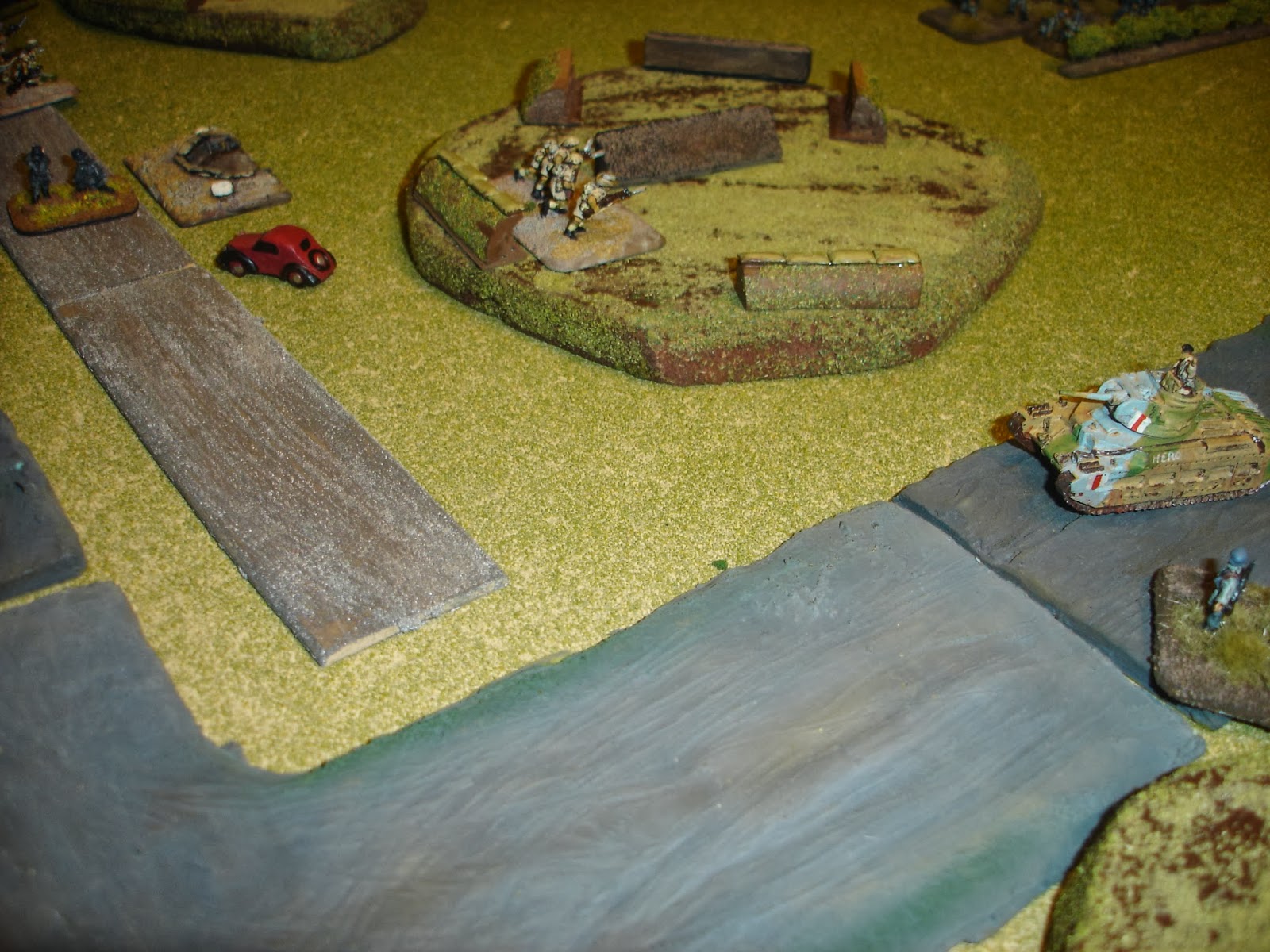 By this stage the game had bogged down into firefights which really required multiple passes of command rolls to build up casualties.  This was hard for the Commonwealth and Greek forces.  The Germans found it tough as most of the remaining targets were entrenched.  It wasn't clear to me what the German objectives were until they made a late push for the... 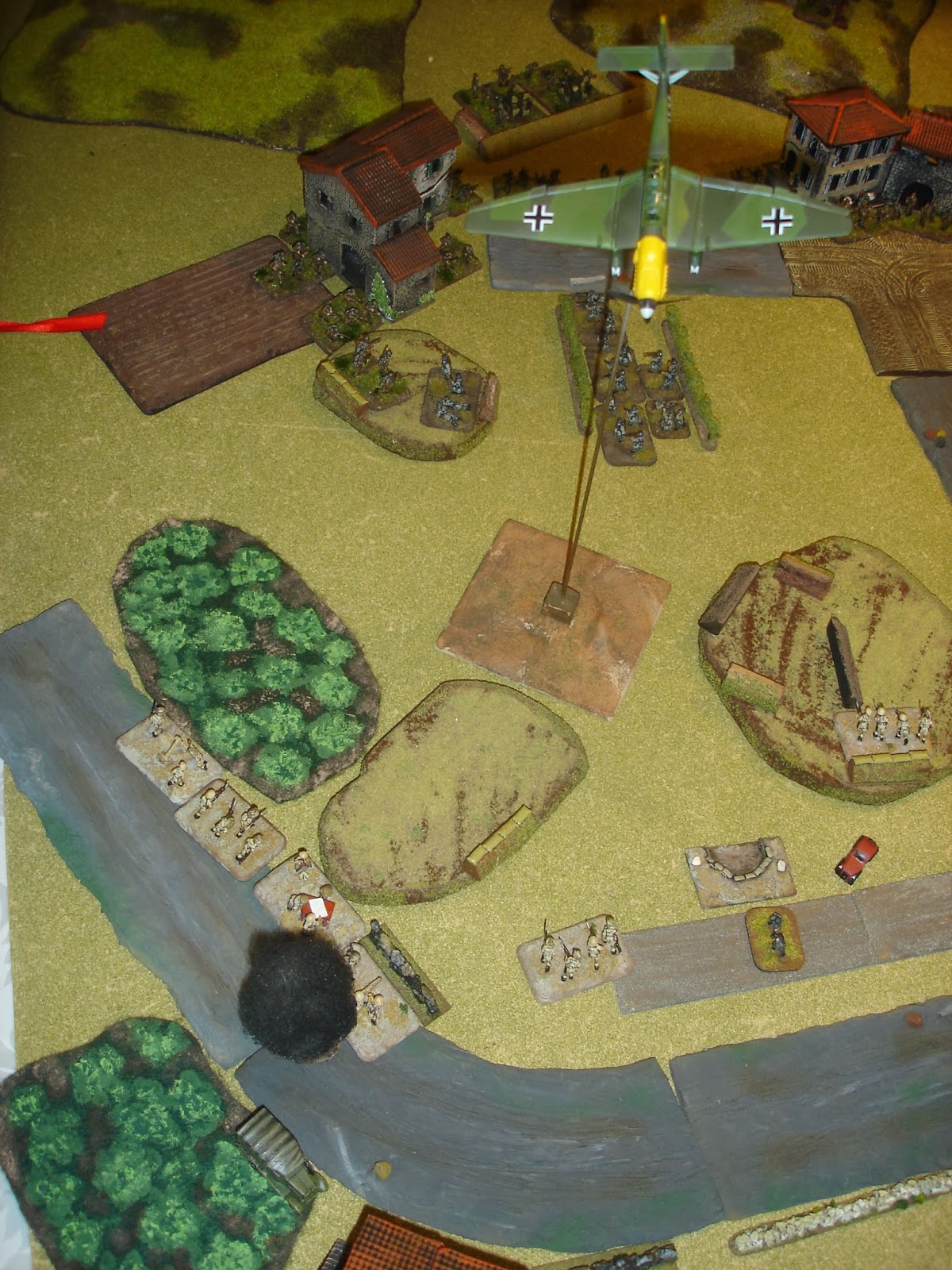 ...airfield!
This turned out to be the third victory objective (after Adhele and Platanes which they now held).  The German FAC had been abysmal in his attempts to call in airstrikes, but on the last turn had some success in getting some bombs dropped on the reaming Australian defenders around the airfield.  The FAC can be seen "occupying" the airfield in the above picture.  The Australians had a carrier (skilfully disguised as a truck) to hand that, along with the Matilda shot up other other Germans as they tried to consolidate on the airfield.

We both made a few mistakes due to being a bit rusty with the rules, but the game played out remarkably well.  The points for entrenchment seem to be too low as they are very powerful, although perhaps when they are outflanked they should lose some of their benefits perhaps?

Rules are needed for paratroops and gliders beyond just deployment as provided with BKC.  As we played it was good to get immediately into action and to have the whole table engaged/used.

The villages perhaps should only have protected stands that could fit in them (that would have been just one or two rather than the four or more we had per village).  The model building came in two and therefore would have easily facilitated this.  That would also have balanced out the entrenchments as well.

More covering terrain was needed and perhaps a different approach to the roads and wadis.

The game was completed in a day (set up and packing up included) - about seven hours in total.

Given the preponderance of infantry it would be interesting to see what Crossfire would make of this type of scenario.  However I wanted to use BKC to see how good it could reflect the larger multiple battalions per side game.

The Australians are from my collection and this game represented their first battle.  All the other figures and models are from Richard's collection, with early Poles standing in for the Greeks.
Posted by Sun of York at 12:36 PM