There has been slow progress with the 50th as I was a bit demoralized with the fiasco that was my attempt to fix the trail leg of the 6pdr.  I’d considered using a bit of lead foil, but I couldn’t get it to hang right.  But Paul’s comment mentioning tissue paper stuck in my mind.
So I went to work on the base – this model was to be a diorama as well as game piece and as I was practicing building a vignette (especially one that would have the pieces physically attached), I felt I should persevere.  It actually is my first such detailed base (well, specifically with WW2 miniatures).  Knowing that the 6pdr would otherwise have been trashed, it seemed a good idea to experiment with it.
It’s not finished yet, I still have to complete the canvass and make some shells as Paul suggested.  I also intend to add a bit of foliage as I discovered another flaw in the 6pdr model – the front shield had been put on the wrong way round.  A bit of bush should act to hide that.
Doing this has been in little five or ten minute slots, which has worked well in building up the base.  The important thing is I’m actually pleased with how it is looking (enough to show it to the world at any rate). 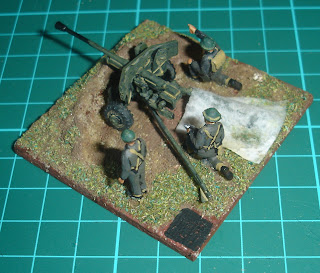