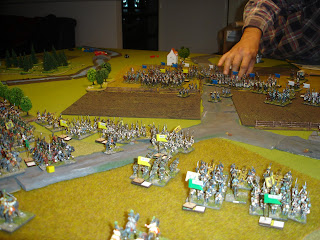 The Hand of Gamer preparing the French attack on the Austrian left, held by the I Corps and the 1st Grenadier Division plus the light cavalry division.  This attack took a long time to unfold and for nearly all the battle it was very quiet relative to the Austrian right. 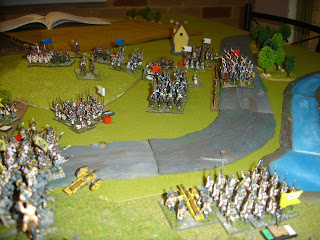 The situation after the first French Guard attack. 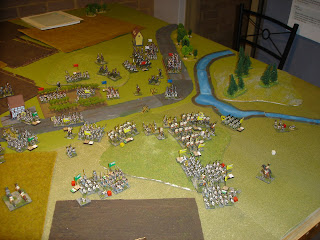 This was the situation after the second french attack on the Austrain right.


Most action was on the Austrian right with two attacks by the French Guard on the Austrian 2nd Division II Corps.  Luckily for them they had the support of the heavy cavalry division and a Grenadier division. 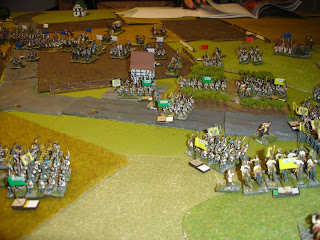 The fighting spilled over to the Vineyard where the Westphalians made a spirited attack. The neighbouring farm complex changed hands a number of times and looks like continuing to be a focal point of the battle.

The Austrian left was very quiet with only some skirmishing and long range artillery fire.  The Austrians are hurrying to regroup around the hill on their right where the French are now ready to launch a further attack, their third.
Posted by Sun of York at 7:20 PM