Mike and I completed another day of this epic struggle to secure a bridge too far.

Mike continued his run of poor combat die rolls, but as the German player, he has the forces and resolve to withstand the losses. 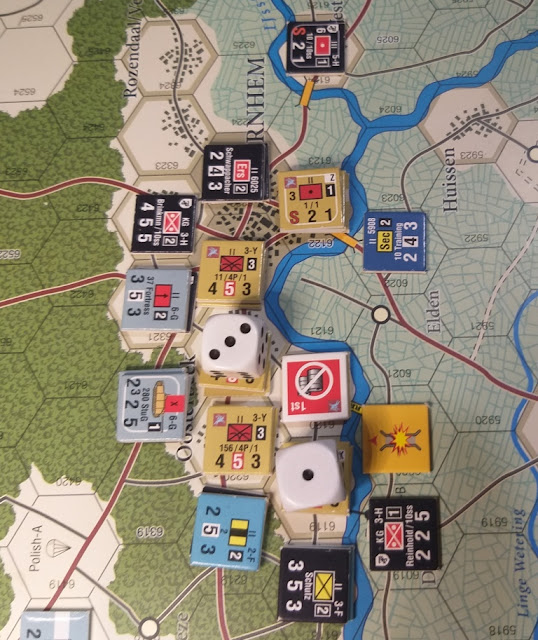 Two attacks on the 1st Para.
While in town terrain, they are not as well protected as their compatriots in Arnhem. 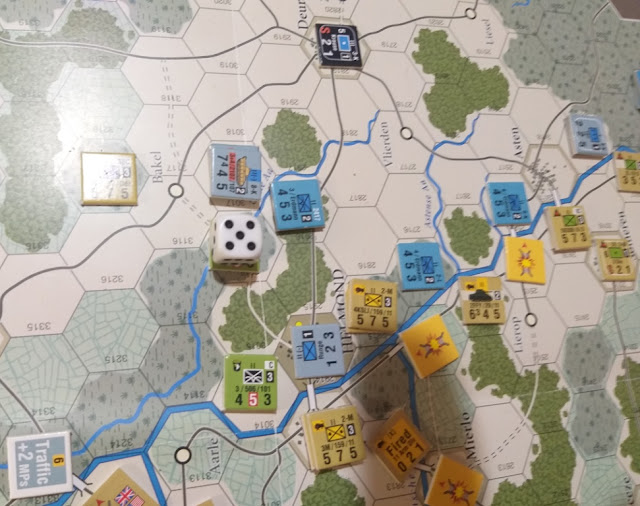 The Germans make an attack to try and reinforce Helmond.
Not going to happen! 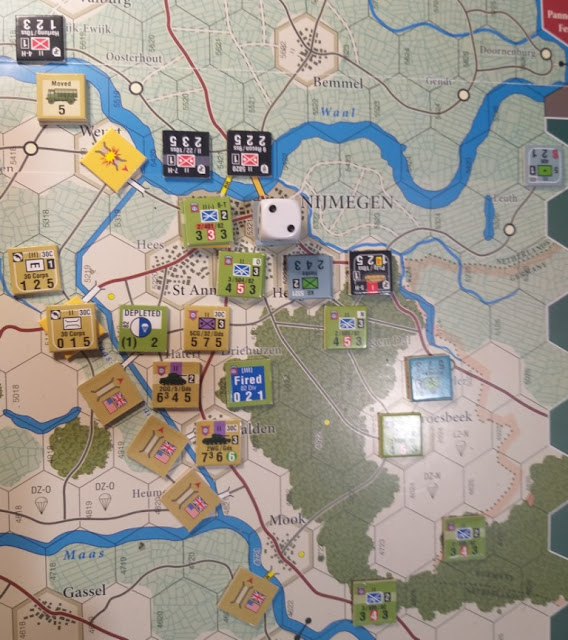 82nd Airborne have another crack at Nijmegen.
Lead elements of the Guards Armoured Division have arrived
and will be able to assist in further attacks. 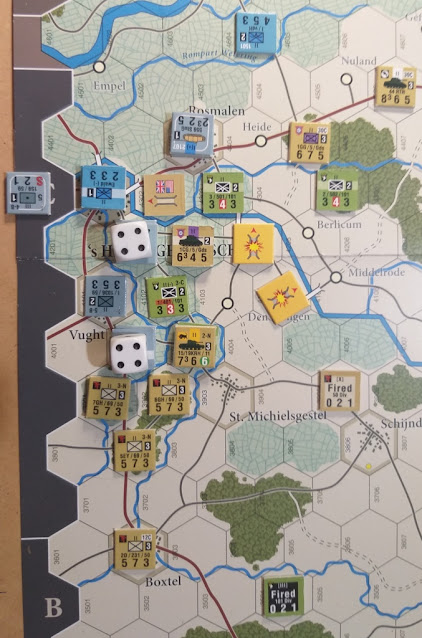 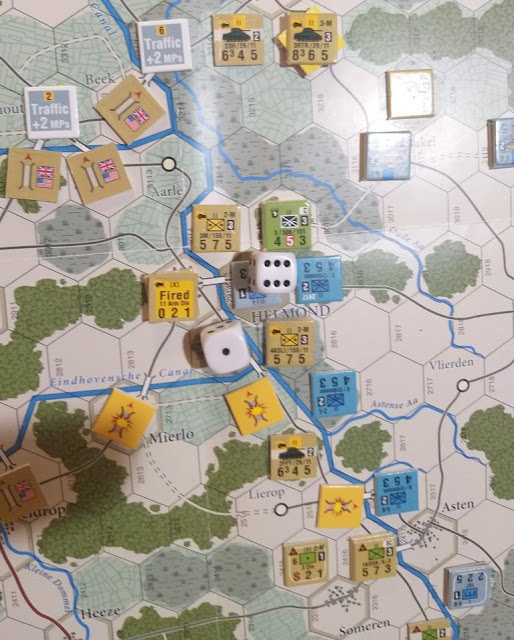 A 7 to 1 attack to take Helmond.
The defenders were able to escape. 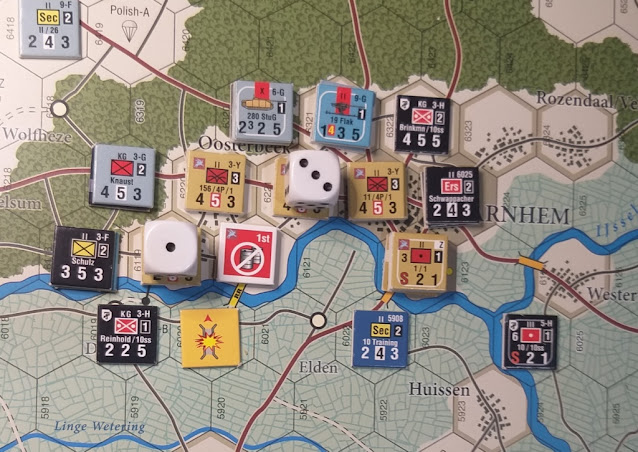 The Germans attack the 1st Paras again (and again and again) 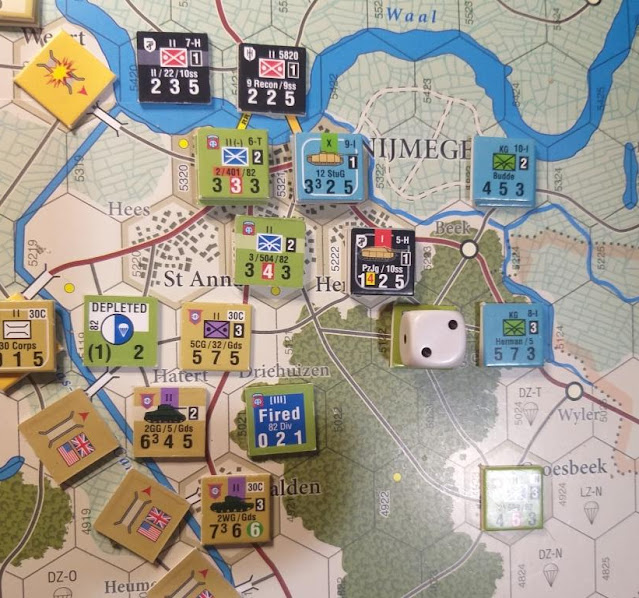 The Germans try and secure their position to the east of Nijmegen.
The Allies will have to clear them away to get better odds against Nijmegen. 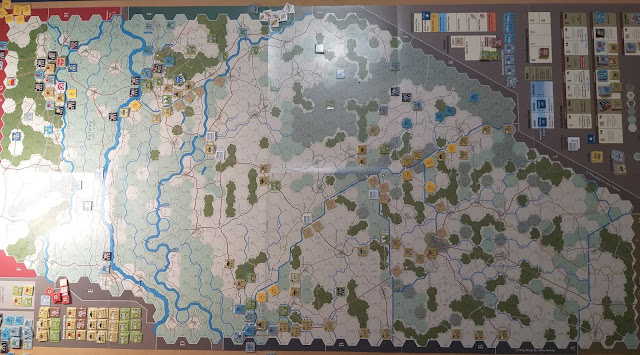 End of Turn 9.
Allied reinforcements (43rd Division) are racing up the highway. 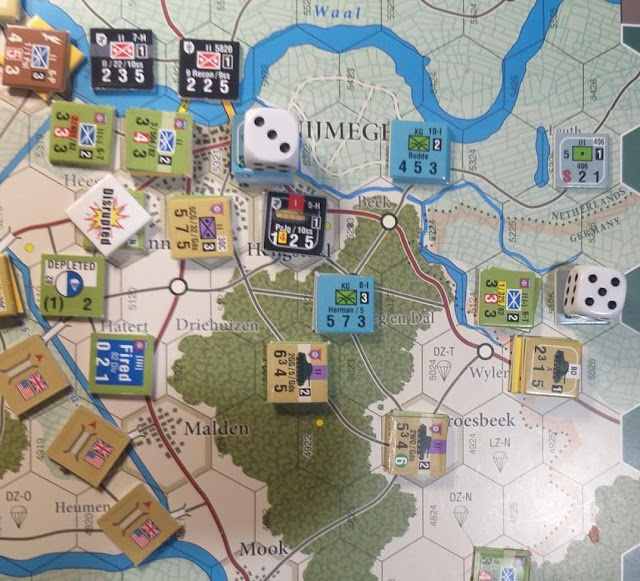 Another attack on Nijmegen,
this time with help from Guards Armoured,
fails to dislodge the defenders.
But the other attack shows the Germans that their time south of the Waal is limited
(benefits of hindsight as you will see). 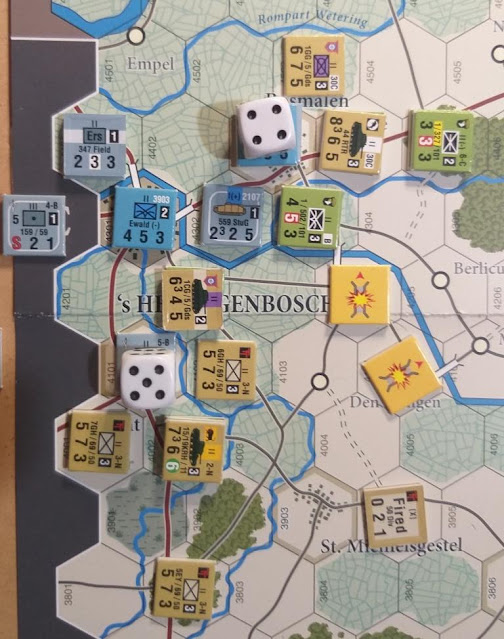 Two attacks trying to secure the German penetration around 'sHertogenbosch. 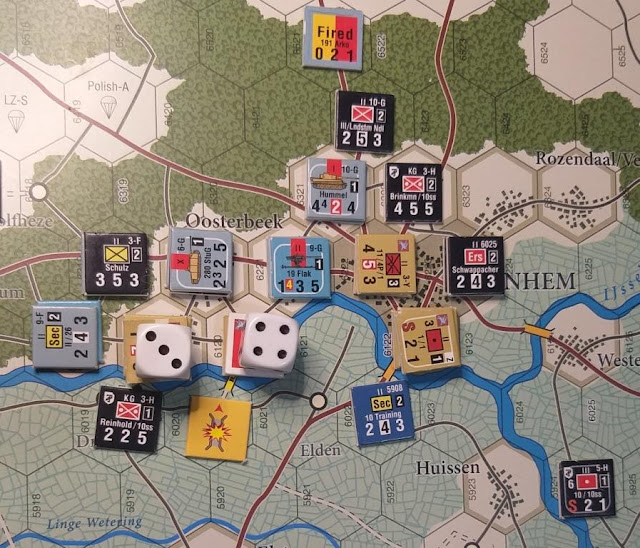 The British paras are in trouble. 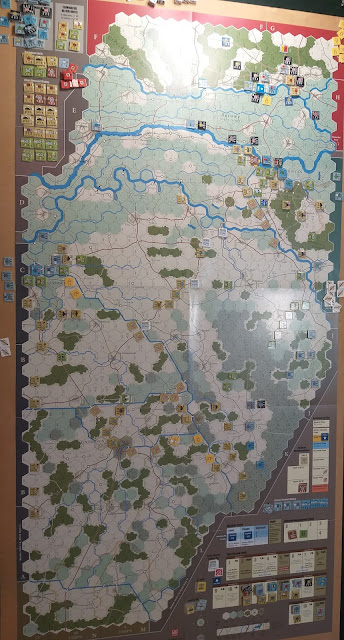 End of Turn 10
The afternoon of the 20th of September.
Note allied forces securing the northern part of the right flank. 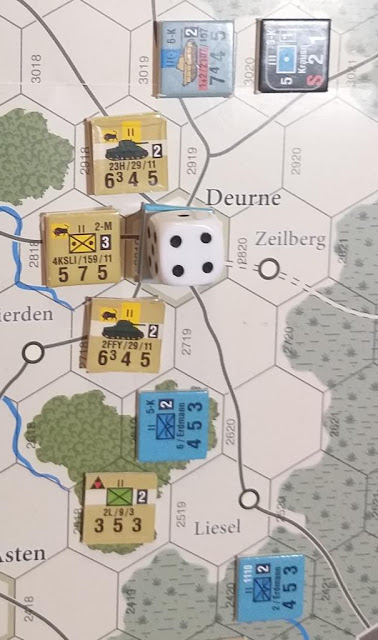 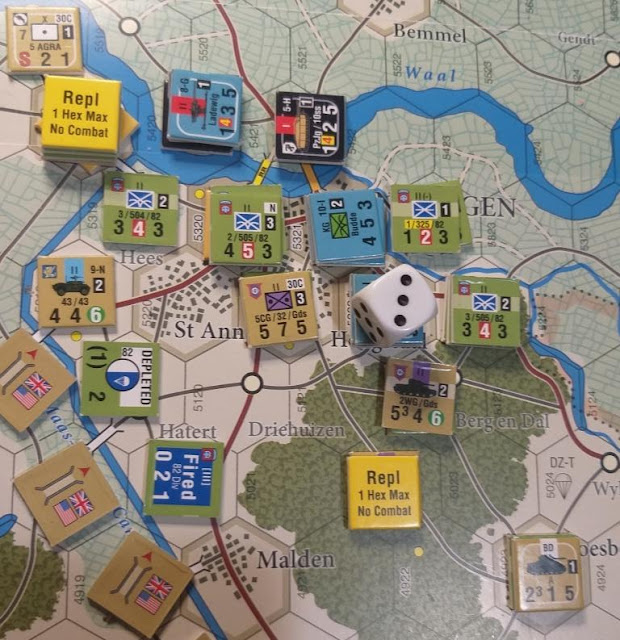 Guards Armoured fight to close of Nijmegen.
Lead element of the 43rd Division has now arrived.
This fresh division will be tasked with crossing the Waal.
To counter this the Germans have started withdrawing troops across the Waal. 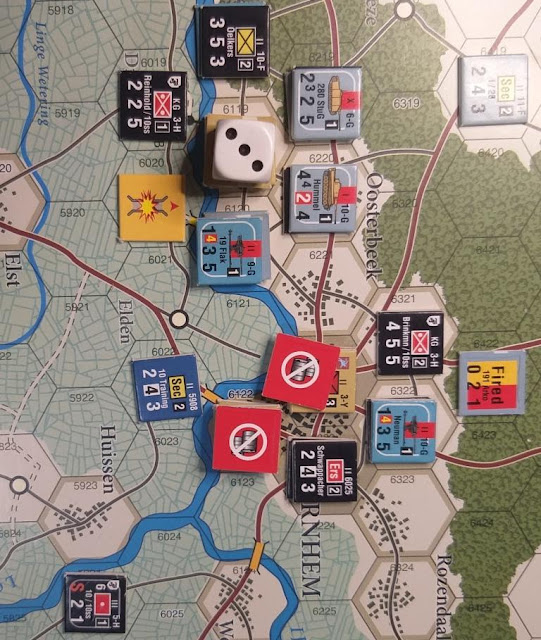 German attack on the isolated British paras.
They find them well fed and tough to beat.
It was fifty fifty, but they survived all their nighttime isolation rolls. 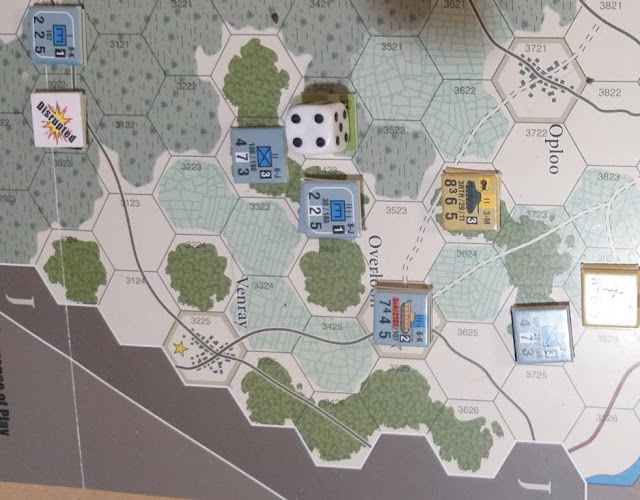 An opportunistic German counterattack on the right flank.
It is successful unlike their other attacks,
but doesn't produce any casualties. 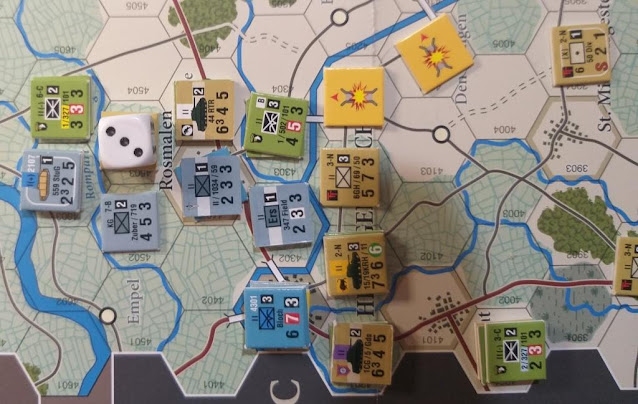 A German spoiling attack on the left flank sees their Stugs flounder in the plodder. 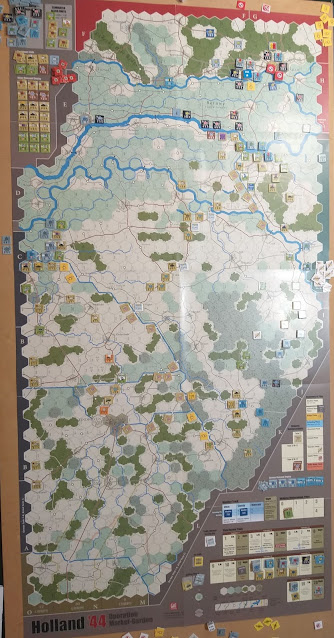 At this stage the Allies appear to have their flanks well secured, however the Germans have built up a good defensive line on the Waal.  The Allies need to still take Nijmegen and get the 43rd Division up and force a river crossing and then survive the inevitable counterattack (which, with backs to the river could result in unacceptable allied casualties).

So far the Allied losses have given the Germans six victory points.  If that rate of loss continues the Germans will win an automatic victory (they need twelve).  The trapped paras outside Arnhem represent another two and a half VPs ripe for the picking.