An 800 point a side Field of Glory 2.0 game.  I ran my Greeks as Pyrrhic and faced Mark's Cathaginians.


The terrain was very agricultural with fields and vineyards everywhere and one steep hill on my left.  I deployed my light infantry on the hill and placed all my cavalry on my right, the centre was made up of four hoplite units and two pike blocks plus the elephants. 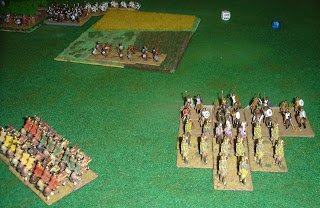 The battle started as I intended, but I couldn’t quite get all my forces in. 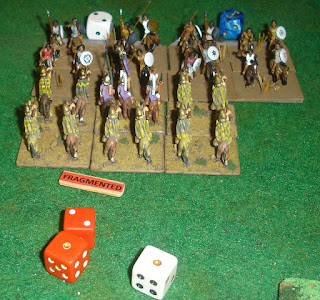 My Greek light cavalry went down in a heap even with their general fighting in the front rank.  Nothing like rolling a three for the morale test and a one as the death role. 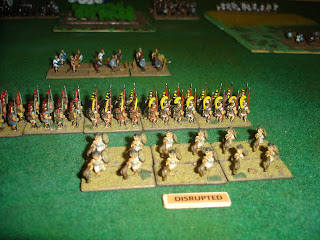 A bit further along and my slingers evaded successfully after getting the worse of a volley of javelins.  In the background the Carthaginians are moving more troops to their left.

On my left the Greek javelinmen tried to close with the enemy slingers. 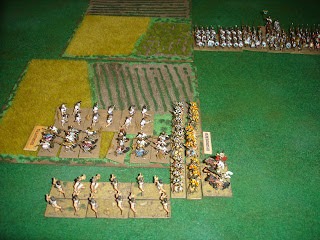 It got interesting when some Carthaginian foot came up to support the slingers and the left most unit of Hoplites turned on them and charged them in the field.  They maybe disordered, but the Greeks had the Carthaginian foot sandwiched. 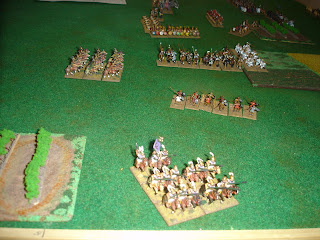 Back on the right the Greek lancers had seen off one of the units of Numidian light cavalry while the Greek heavy cavalry ignored the other unit of Numidians and started to face off against the Carthaginian cavalry which was pushing down the side of Pyrrhic infantry. 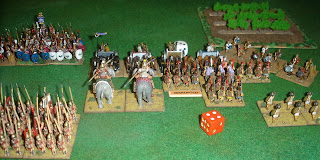 The right of the Greek centre had been chasing off the Carthaginian javelinmen and ended up engaging their heavy chariots in a bloody affair.  Pyrrhos himself joined in to help things at this crucial stage of the battle. 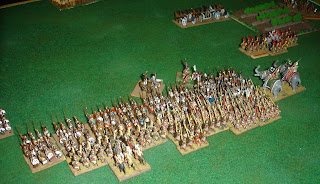 Pyrrhos made all the difference and the chariots were defeated after they forgot to break-off.  The main battlelines clashed at this point. 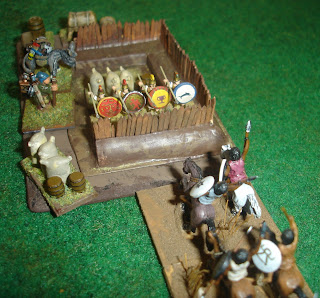 The ignored Numidian light cavalry on the right had made it round to the Pyrrhic camp by this stage, but found it fortified (and defended by a truly ancient stand of Peter Laing 15mm figures, put there for show only, but they kept the Numdians out). 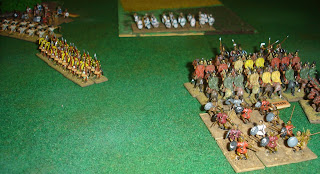 The cavalry on the right is fully engaged.  Even though they had the numbers and quality it started out badly for the Greeks until they got support and finally overwhelmed the Carthaginian cavalry, effectively securing the right flank.  The Carthaginian light infantry is being chased by the Greek lancers, just out of pictures.  The Greek right wing commander had joined heavy cavalry and killed his opposite number.

On the left the Hoplites held the field while the javelinmen got into an inconclusive fight with the Carthaginian slingers.  The presence of the Hoplites secured the left of the Greek line.

In the centre it was a hard fight.  Pyrrhos had joined in but was killed, causing one of the pike blocks to fail their morale. The Hoplites and the elephants fought extremely well and broke their opponents, winning the battle, it was just a pity Pyrrhos wasn’t around to see it.  A true Pyrrhic victory!