My Classical Greek army was born in the days of WRG 6th Edition – Later Hoplite Greek as the army was called by those rules.  It migrated to 7th Edition, but always performed poorly.  Apart from adding new units to be able to form Alexandrian and Successor armies, it mostly languished.  Of recent times it had only fought in DBA games.  It was with some interest and nostalgia that I chose to run them on Friday’s Field of Glory game (especially as I feel I am getting a better handle on the rules now). 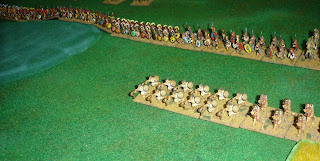 The army is based on the hoplite, heavy foot armed with spear.  It was hard to get a photo showing them all. 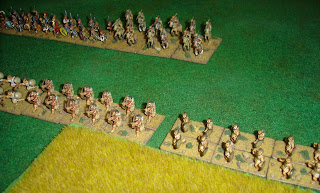 This is my left wing as deployed with slingers, Cretan archers and javelin armed skirmishers to the fore backed by Thracian foot and light horse. 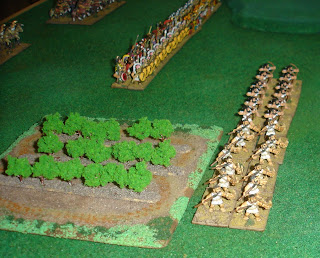 On the right was positioned more archers and javelinmen, backed by another unit of light horse and in the background the Sacred Band of elite hoplites and behind them the Thessalian heavy cavalry. 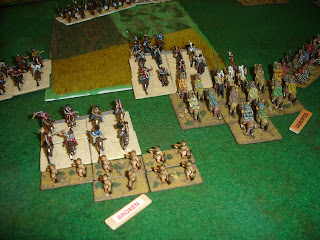 Action commenced immediately on the left as a mass of enemy light horse rode down the poor javelinmen who had discovered the fields to their front (now rear) were no protection at all.  The Thracian horse fought valiantly against the mounted bowmen, but it turned out they were swordsmen too and things were looking bleak.

The money shot – the Greek phalanx as it advances in the centre.

Right on the money – the Greek commander inspires his troops. 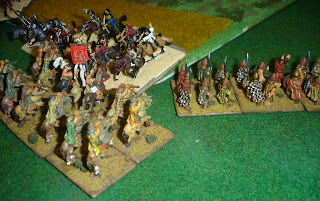 Thracians to the rescue!  The Thracian horse recovered and it was all over for their opponents when the Thracian foot hit them in the flank.  The left flank is stabilised, somewhat – the enemy light horse who had crushed the javelinmen went on to rout the Cretan archers who had failed to keep a suitable distance between themselves and the enemy.  The victorious horsearchers then went on to loot the Greek camp, but did little to affect the battle after that. 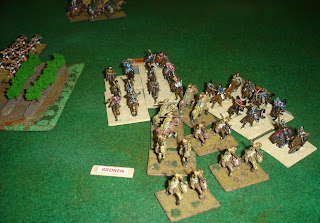 On the right there was a long battle between the Greek light horse and the opposing Scythians until they were able to bring up a second unit and take the Greeks in the flank.  However this was also indecisive as the Greek archers were secure in the vineyard and the Greek heavy cavalry were able to contain the enemy light horse even though they couldn’t catch them. 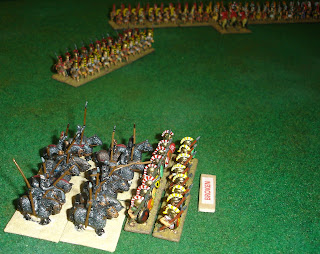 Back in the centre ... POOF!  This unit of hoplites collapsed in one round which was not expected. 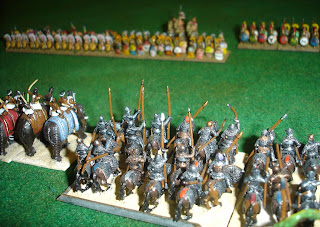 As we can see in this view from the Scythian centre they had more of these killer cataphracts and elephants too. 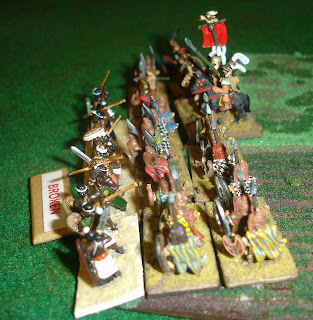 On the left the Thracians continued their march to glory, overrunning the Indian foot. 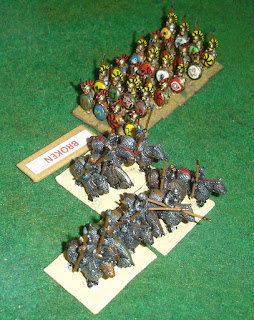 Revenge!  Drilled hoplites take the over confident cataphracts in the flank – they had failed to turn to meet this threat and paid for it.

Finally the Greek main battleline gets engaged.  It is hard going.  The pond, proudly captured by the Greek rightwing javelinmen (their only achievement), interfered with the Greeks closing to fight and they weren’t able to initially use their superior numbers. 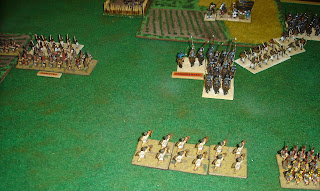 The Thracians, after an initial surprise – arrows can hurt – destroy the Indian archers and go on to take the enemy camp.  The slingers got in a lucky shot against the reforming cataphracts and they routed.  The other Indian archers kept up a mighty barrage, but failed to charge when they had the chance. 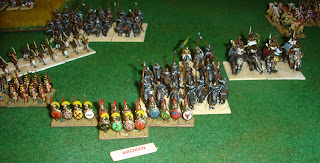 All over.  Another unit of Hoplite breaks before the combined weight of cataphracts and elephants, but note the victorious Greeks in the background.
A very exciting game with lots of action covering the whole table with just about every unit engaged.  It was a bloody affair and both armies reached their limits very close to the same time.
It was wonderful to see my Tin Soldier Greeks in all their glory.  Having started collecting them in the 1980s they are truly ancient.
The Indo-Scythians are from Mark’s collection along with the terrain.