The world probably doesn’t need another post on how to model bocage, but these posts are always more for my benefit, so here goes.
The work has been pretty quick.  While I didn't keep a record I have put in the time the photos were taken.  Normally I have been working in about 15 minute slots with plenty of time for drying.  I have put in plenty of research (i.e. surfing) time.  There is lots of inspiring stuff out there.


First I bought some semi round wood mould and cut six experimental strips, sanding down the corners so the end result looks like a big brother for the pop-sticks I have been using recently for hedges. (Photo taken 4:10 PM 14/12/2012) 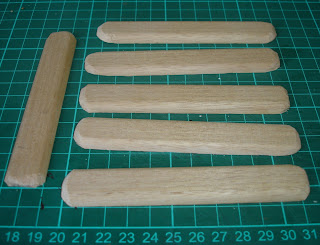 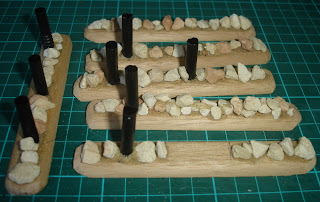 Third step was more PVA glue and a finer grade for kitty litter, however in future I would probably drop this step as it was a bit fiddly with the kitty litter scattering a bit too much and the finished result getting largely covered up in the next step. (Photo taken 9:56 AM 15/12/2012) 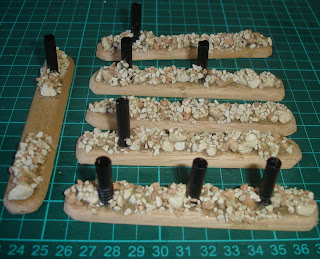 The fourth step was covering with plaster.  I used the type of crack filler that comes ready prepared and as my tube was a bit old I just mixed in a bit of water to get better flow. (Photo taken 1:45 PM 15/12/2012) 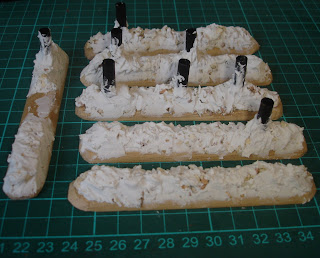 The fifth step was undercoat in black using trusty Tamiya black and then a base coat of Tamiya flat brown.  I wanted a dark look and hope that this approach will provide that. (Photo taken 10:45 AM 16/12/2012) 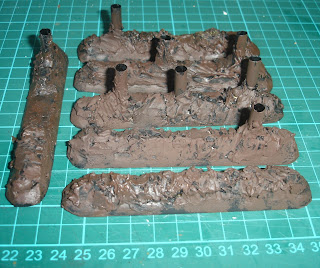 Next will be to add the hedge and I’m currently looking at various ways of doing this, but that will be part 2.
Posted by Sun of York at 11:41 AM