On 18 March 2012 Richard and I fought a straight up 800 point game using Napoleon’s Battles.  It was French versus Russians in 1812 and I was the French.  This game gave me impetus to finish attaching magnetic backing to my French troops so they could be safely transported.


The basis for the army I put together was the first attack at Borodino for which Napoleon concentrated 75,000 men against Bagration's army.  The spearhead of this force was formed by Davout's I Army Corps, and Ney's III Army Corps. They were supported by Marshal Murat's Reserve Cavalry (I, II, and IV Cavalry Corps).   I took some inspiration from this site: http://napoleonistyka.atspace.com/Borodino_battle.htm. However the game was not meant to recreate this phase of the battle and I had no idea of the Russian force or terrain.


My other reason for taking this force was I wanted to try an aggressive style of play.  Normally I’m a cautious and defensive player, but this time I wanted to attack. 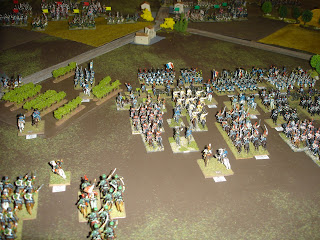 View from the French centre before hostilities commenced. 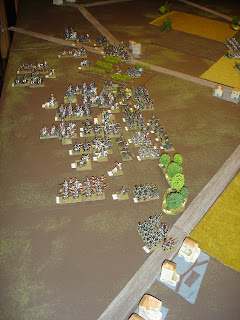 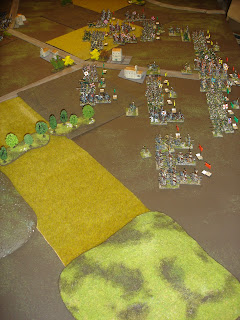 The Russian in-depth deployment, eager to get into a fight.
The game opened quickly with one French division attempting to seize the village in the middle of the battlefield.  The Russians immediately attacked, but with the commitment of the Saxon heavy cavalry by the French the Russians were repulsed. 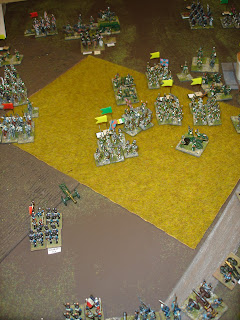 The French had intended to attack on the right and hold back on the left.  The whole line was advancing and the Russians again tried to attack the French before they got into position on their right (the French left).  This turned out to be a disaster for the Russians as they were repulsed and left in a disordered state which the advancing French were able to easily exploit.  The result was the permanent demoralisation of the Russian Right Wing as their routing troops were run down by French Chasseurs who had made a controlled recall move – devastating. Just follow the gap in the Russian lines from the abandoned battery to the top corner of the field to find the Chasseurs. 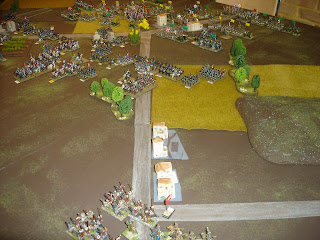 On the French right the Russian Cossacks had moved around the flank, but the French had plenty of cavalry to match them and they did not take any part in the battle. 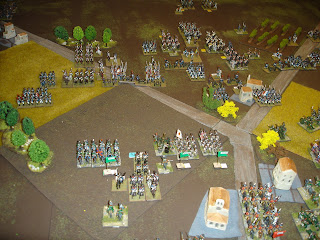 While the Russian right was collapsing the French had unleashed a heavy cavalry charge into the centre of their left.  The cuirassiers did terrible damage, but found themselves surrounded. 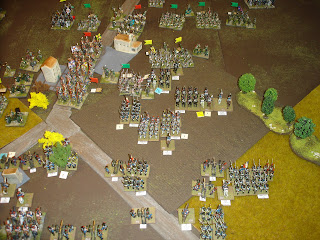 The Russians tried their hardest to wipe them out, but the rest of the French came up before they could accomplish this and the Russian left was smashed as well causing the Russian army to break.
The Russian Guard Corp remained in reserve and would retire to wait for more auspicious times.
It was all over in two hours (four turns), the quality of the French cavalry being the deciding factor.